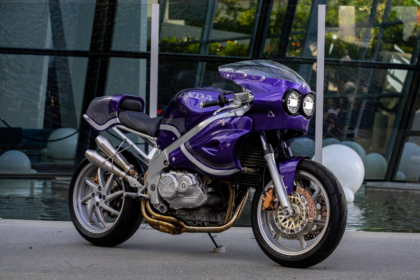 The Honda VFR750 project was new ground for Purpose Built Moto. Taking a mid 90’s track day staple, stripping it down and rebuilding it in our vision of a retro throwback racer. Of course we couldn’t stay too true to form with any particular sub-genre of track bike, instead choosing to criss-cross the lines of 80’s enduro, early 90’s sport bike flair, and a healthy dose of our own PBM styling. 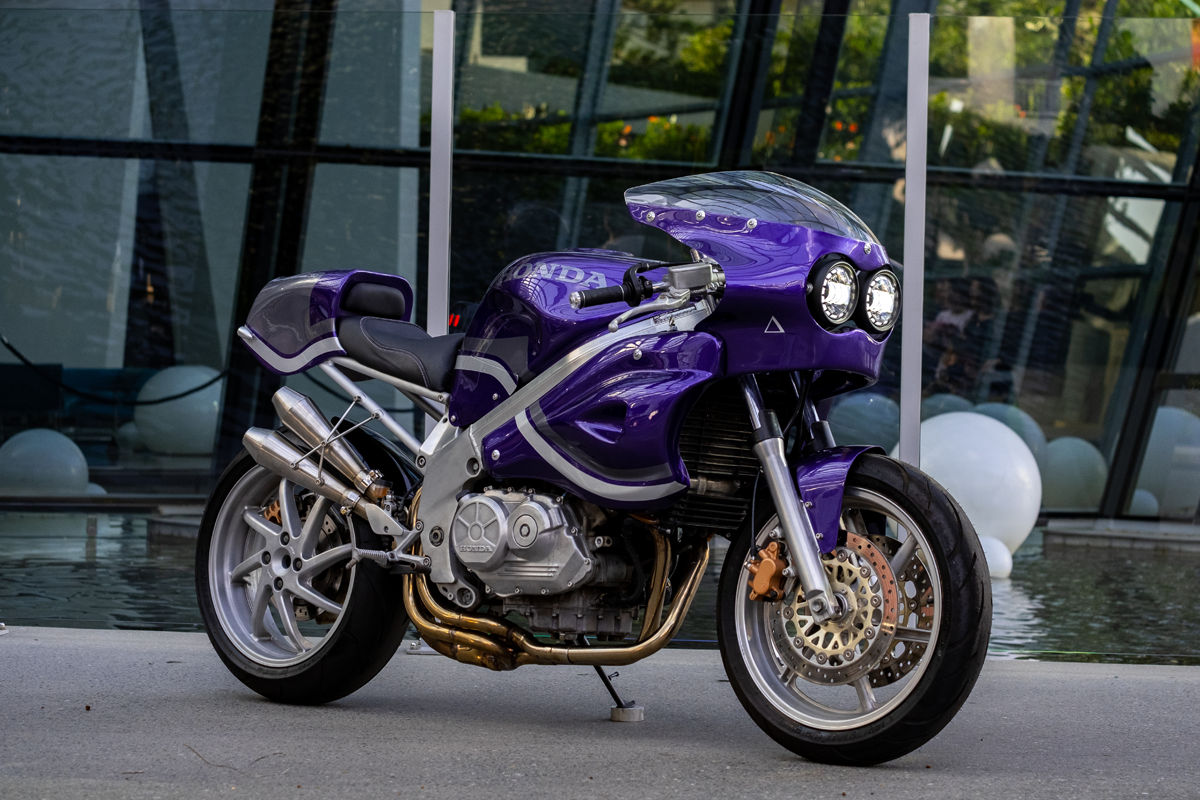 All blended together to turn out a fast paced, eye catching retro sport that looks straight out of your favourite synth wave electro music video (yes I know you have one). The base bike, a 1994 Honda VFR750 Gear driven cam. We started with a well maintained, and running machine that was a little too rough around the edges. After a lifetime of being door checked in carparks, dropped in a garage once or twice and then having a minor off on the road, the Honda’s heart had plenty left to give, but the styling was clapped out and needed the caring touch of our capable and willing hands.

Having never worked on a bike quite like this, our first stop was to pull it down, take stock and see just exactly what we were working with underneath all that broken plastic. The VFR is a light bike, with a low belly and once the fairings are off, very little visual weight on the tail. Just how I like them. 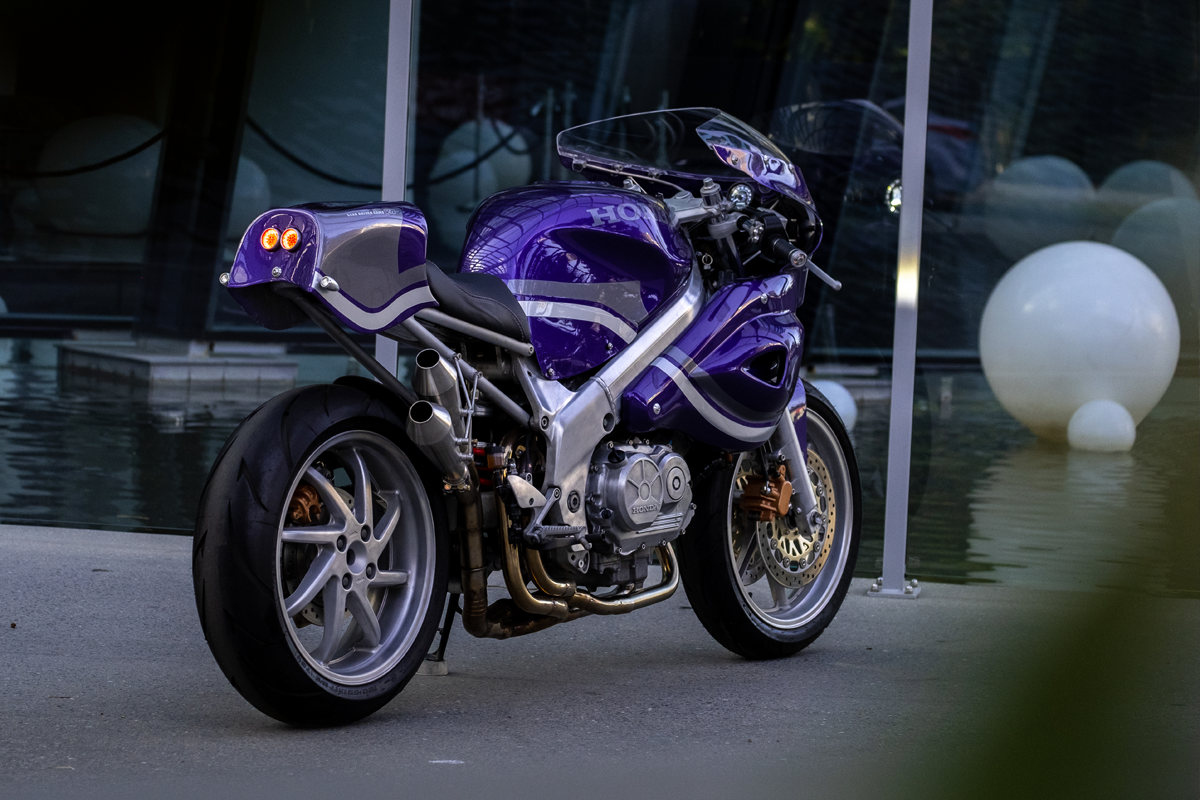 I wanted to try my hand with a faired bike, so after a little hunting I set my sights on a tail and front fairing from Airtech and had those on the way. In the mean time, we fabricated an aluminium subframe, fitted up a set of performance headers, and cleaned off the old fairing mounts. The stock ’94 rear mag wheel was turfed for an RC30 Honda 8 Spoke wheel, a far better style, and better suited to the developing idea of what this bike would become. 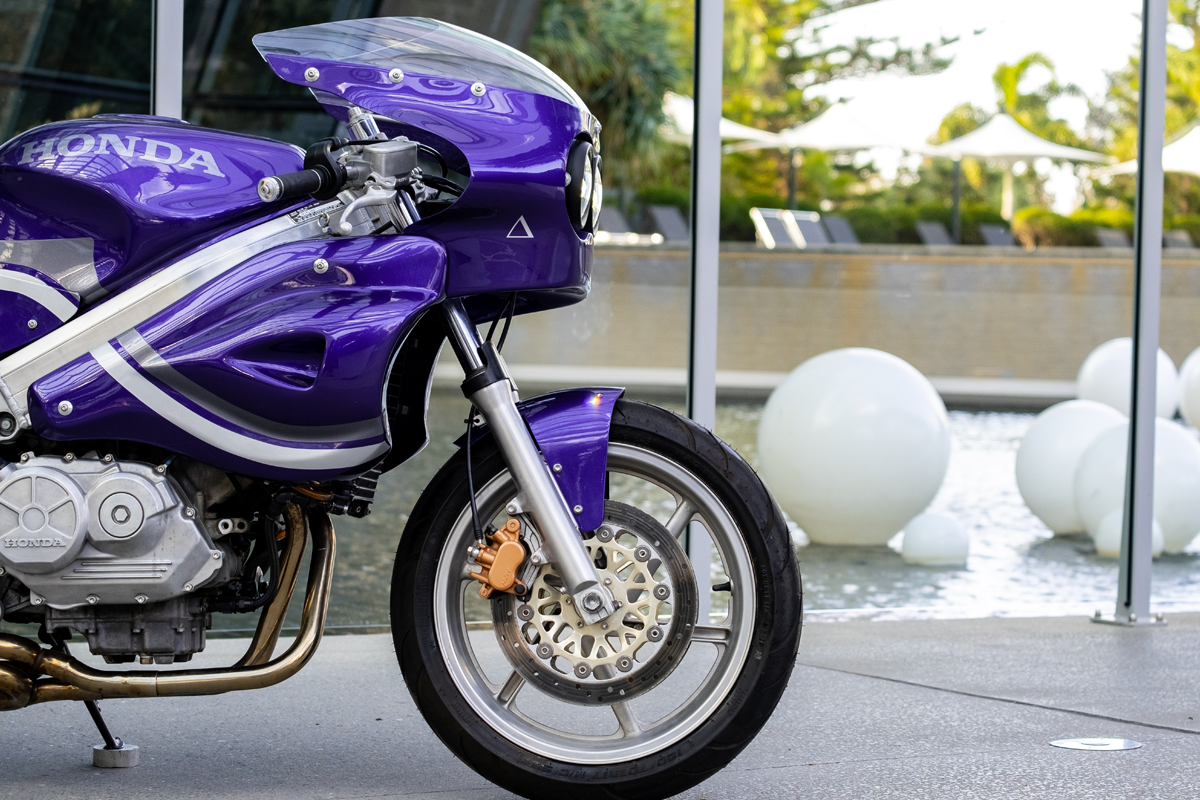 With the new front fairing and tail cowl in hand, I got to work on fabricating the stainless steel mounts on the front end. The front clip that unbolts from the frame neck houses 2 x 4.5” PBM LED Headlights, the Daytona Gauges and mounts the front fairing. All removed with 2 bolts. The fibreglass kit was cut and modified to fit around the VFR750 cooling system and hoses. Finishing off the front end is a sheet aluminium front fender, using a universal Ally fender and some hand bent sheet metal welded up and finished back. 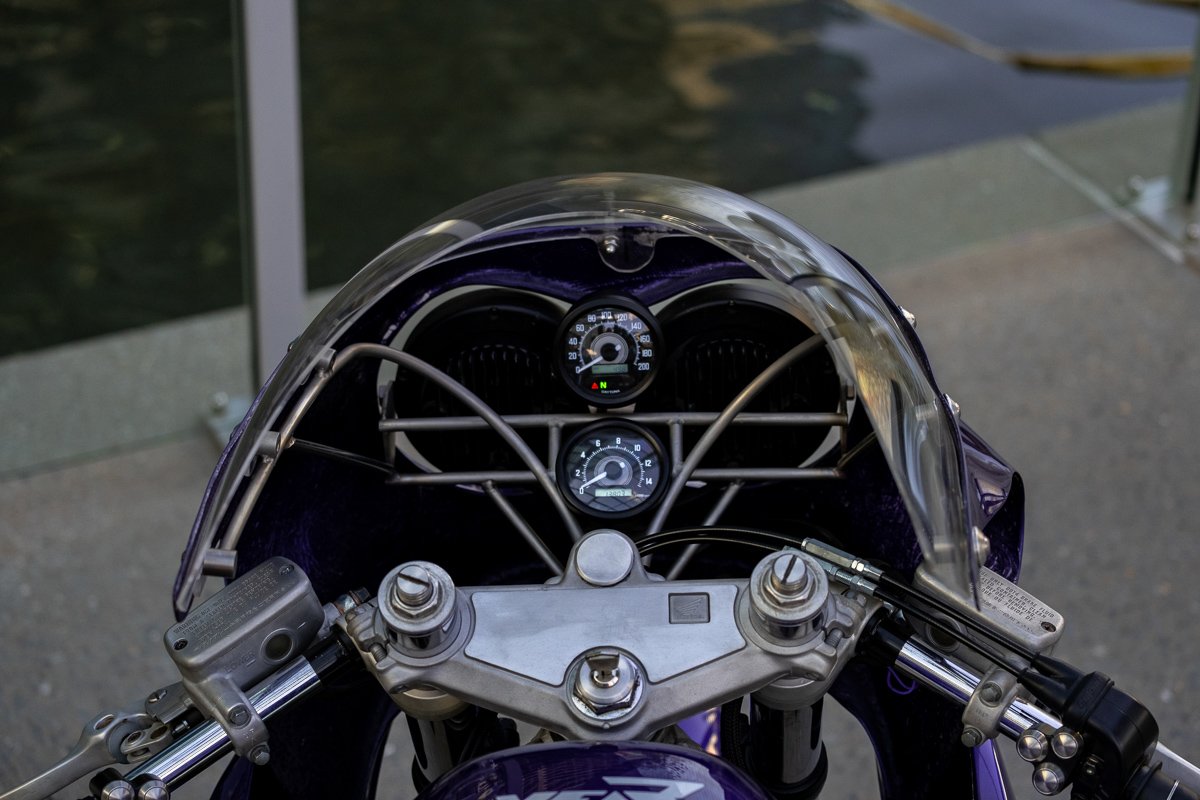 In the cockpit we have centrally mounted vertical gauges, with a temp gauge mounted under the left side fairing. Tarrozzi clip on bars, re-conditioned Nissin levers and a pair of Purpose Built Moto 3 Button Switches.

With the tail section now mounted, the exhaust was completed with a pair of 38mm Torpedo Mufflers, hung off a decorative X-mount we fabricated using our Stainless Steel Fabrication Bungs. Mounted in the tail are a set of twin Orbit Brake Lights, and the Hollowtip LED Blinkers. 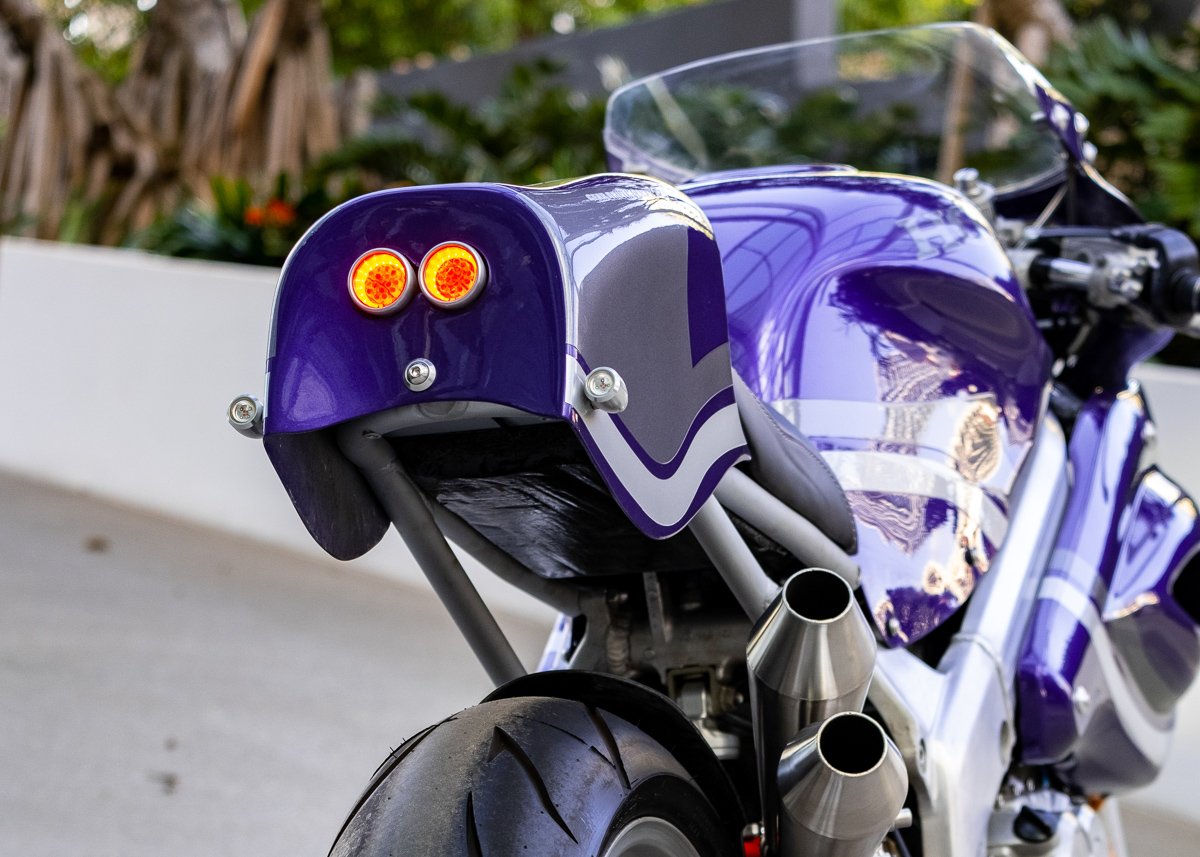 The Honda racer was beginning to develop some sharp styling, but it was also covered with flowing round shapes, something that presented a challenge with our next task. Making the side fairings from scratch. This was quite a process that our Instagram followers were given a look at the end-to-end process as it happened.

It started with a few blocks of foam mounted where the side fairings should be. Slowly and pain stakingly shaved away and shaped until the form started to reveal itself. The overall outline was quick to land on, however the detailing took quite a while. 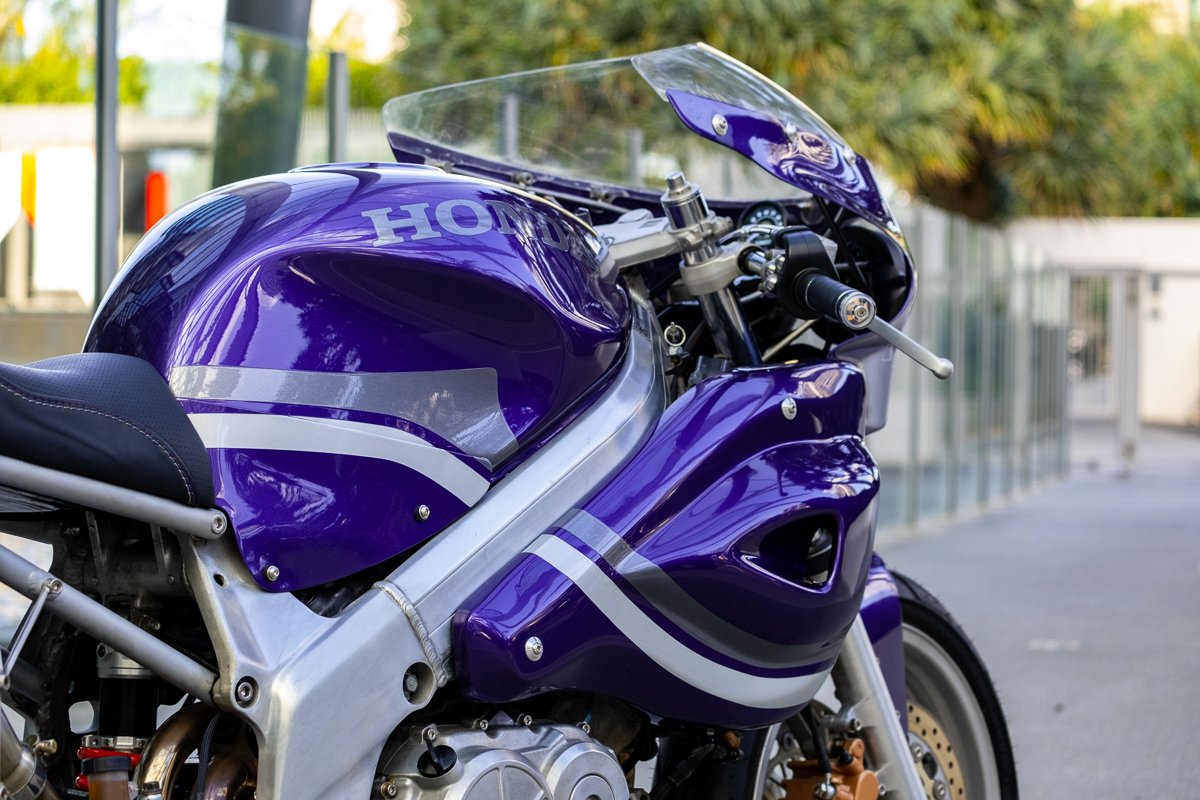 Battling between the many sharp straight edges of the frame and wheels, and the flowing curves of the retro fitted body kit. In the end though I’m happy with the result.

The fairings shaped out into a simple vented design, with a teardrop detail that flows to the rear of the bike. This detail also gave us some form to work with on the graphics kit a little way down the line. So once that was done, I had to make a mirror image of it for the other side…. Which is an ordeal I won’t bore you with here. 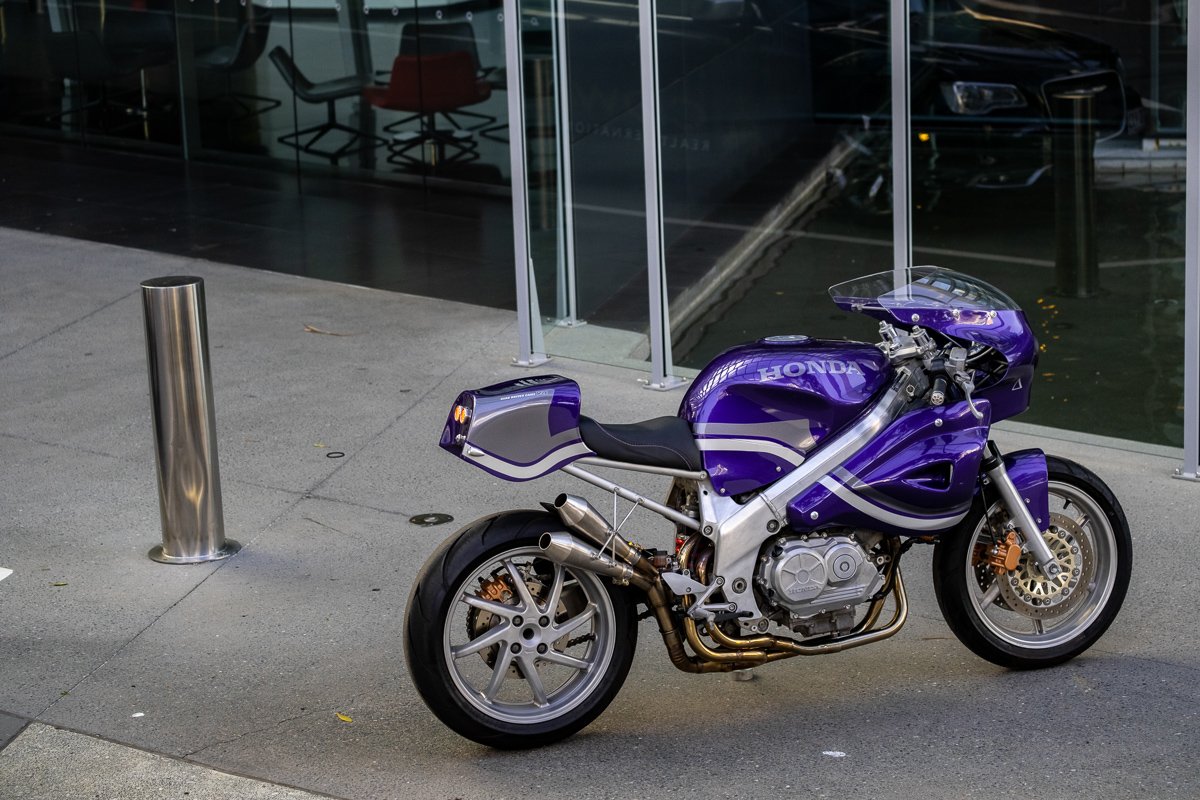 As the body was taking shape we were busy re-mounting all manner of gizmos and gadgets from the original VFR750. Including the oil cooler, ignition coils, fuel pump and fuel cut off tap. As big as the bike seems, it was still a challenge to tuck everything in nice and tight.

Onto the more mechanical side of things, the wheels and master cylinders were vapour blasted to restore the original condition and left unpainted to give a brilliant textured silver finish. As we progressed with minor works, I settled on a colour palette for the retro racer. I wanted something bold 90’s inspired. A metallic purple would be the primary colour complimented by a gun metal detail and bright silver accents. 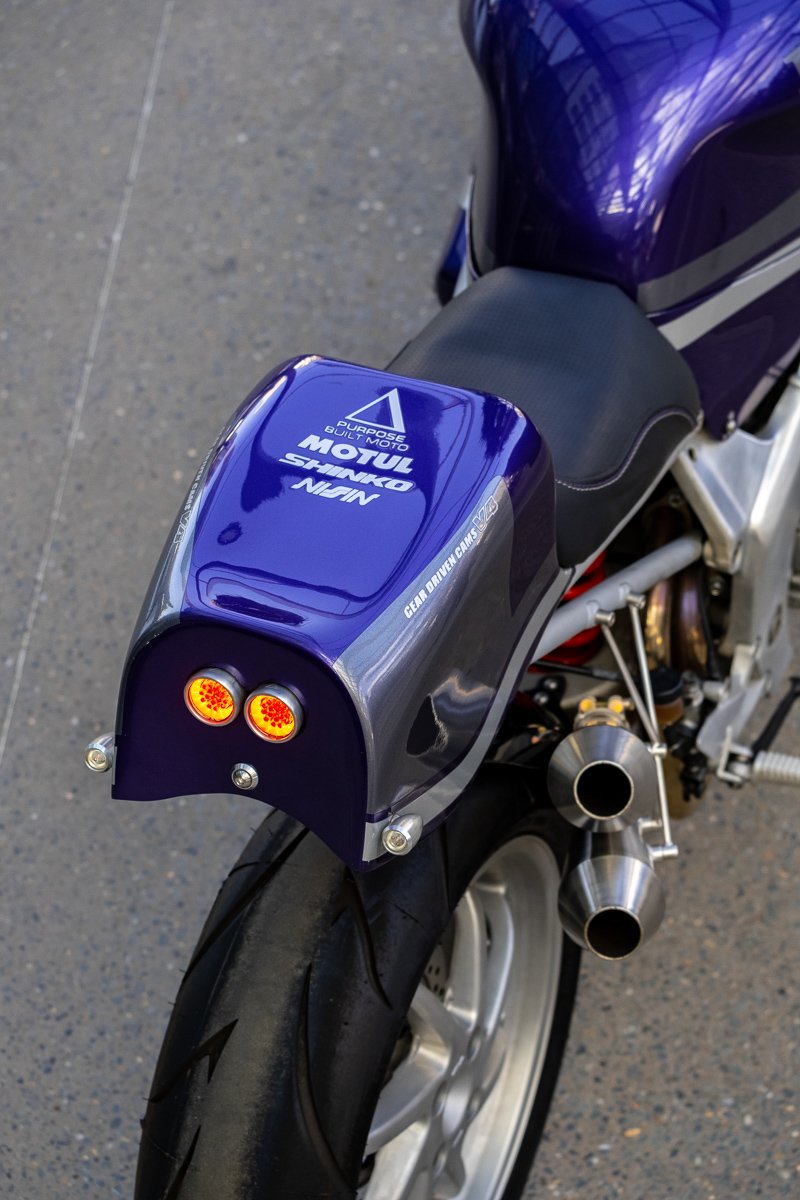 Pushing further into retro-racerville I sketched up a graphics design and the guys at Stick it wraps finished the idea out in a thin vinyl kit that was laid down before final clear coat. When the paint came back I was in awe of this thing. The colours are over the top, but in the best way possible.

The seat section was custom made and can be removed to reveal the Black Box unit, and electrics tray tucked between the frame rails. Being a 2 part seat with a base and butt stop, Jamason from Timeless Autotrim kept it simple with some tasteful use of perforated leather in simple shapes, stitched up with purple and silver seams. 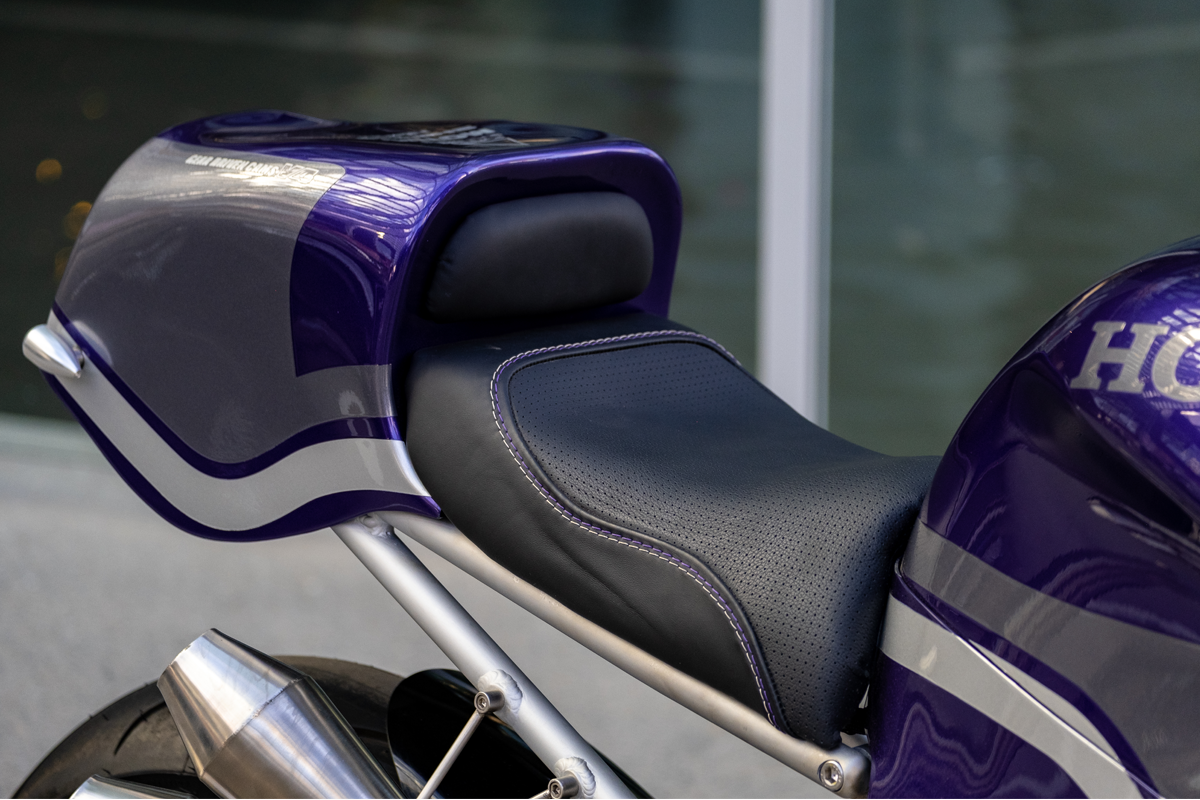 The VFR750 retro was a challenging project visually, but as it rolled off the bench on its way to dynotune I was completely content with the work we’d completed. With a curb weight of 175kg, and running at 86HP on the dyno you can imagine just how much fun this bike is around some wide open corners on a sunny Gold Coast Morning. 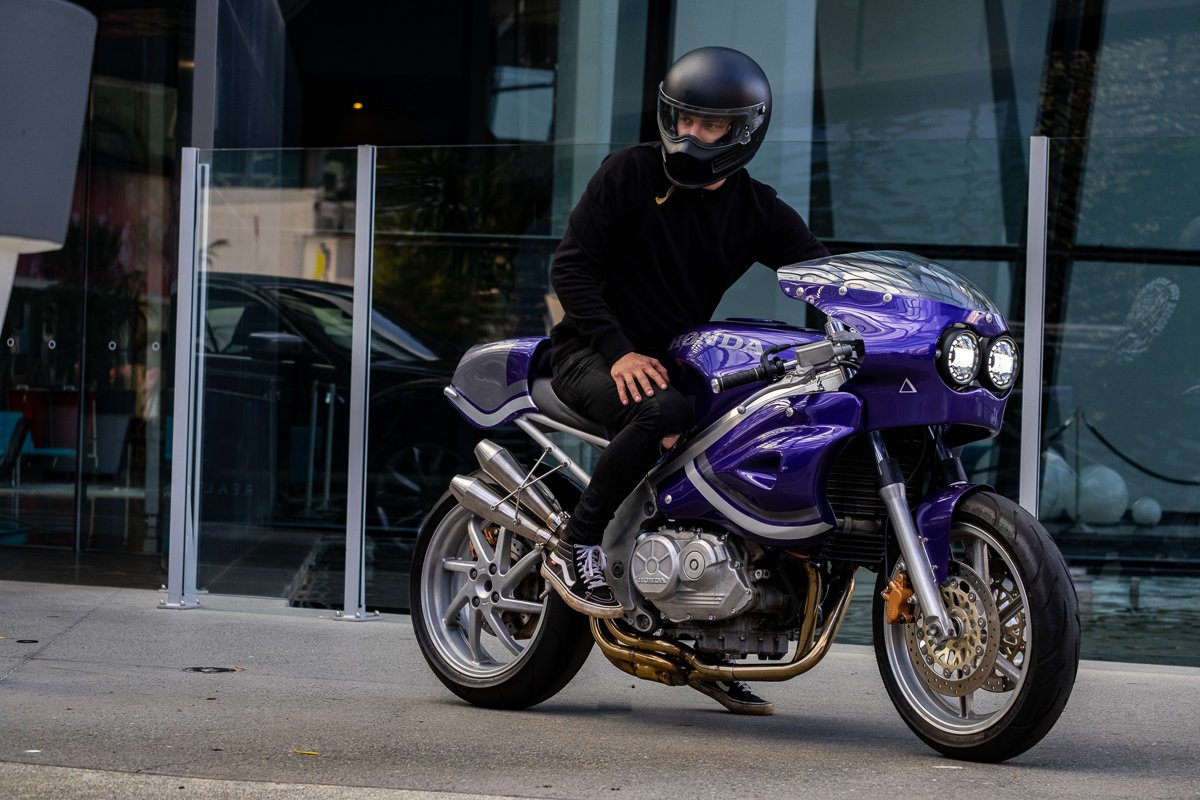