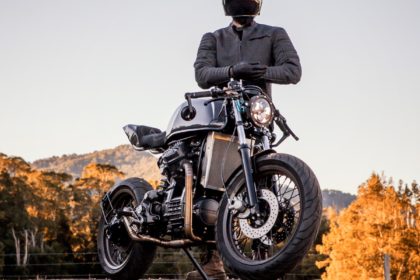 This CX500 marks the first in the Purpose Built Moto Signature series. The idea behind this stemmed from a need to differentiate between the customs that roll out of my garage. As the idea of Purpose Built Moto has taken shape, there is an increasing difference in the amount of custom work and creativity put into our projects. Some bike’s- all of which I’m proud to put my name to- are restricted in terms of time, budget and owner input. I aim to look after everyone in what I do regardless of budget and ideas, because everyone deserves to have a custom bike to call their own. The small in-and-out seat hoop and lighting upgrades produce just as much enjoyment as the mammoth undertakings that get seen the world over. Purpose Built Moto has gotten to where it is because of taking pride in everything we do, not just the high budget builds. 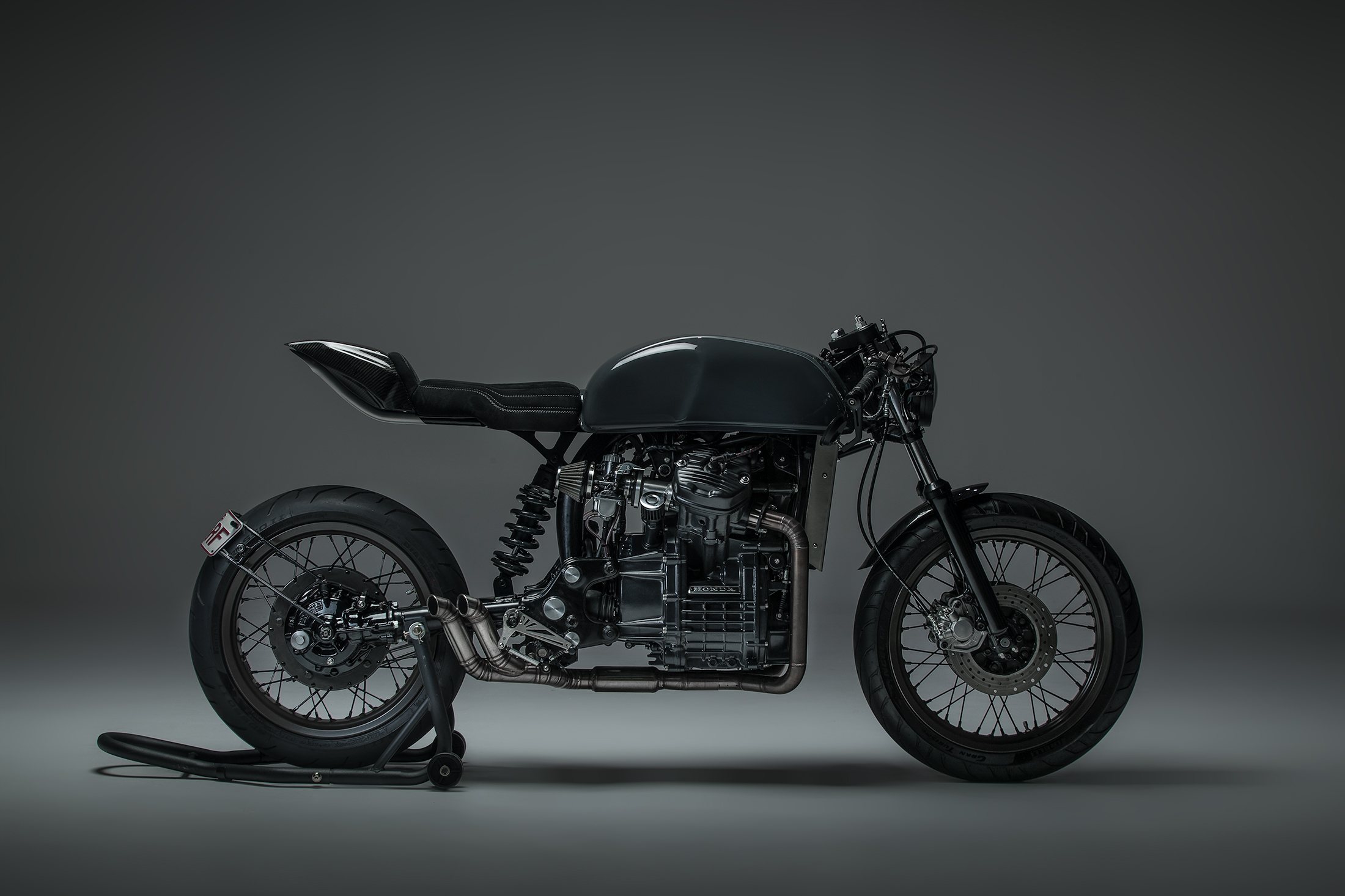 That said, when you see the Purpose Built Moto signature on one of our builds, this marks a motorcycle that speaks to my ideas and skill set being pushed to the extent of my ability at the time. Purpose Built Moto is a vehicle for progress and with every fresh set of wheels to hit the road, a lesson learned. The signature series will represent a motorcycle where I’ve had all but creative control over the finished product and been given license to test new ideas. And I’m stoked to share with you the first in a hopefully long line of projects, the Purpose Built Moto CX500. I’m dying to hear what you think!

The CX500 just released out of the Purpose Built Moto Garage has been my longest running project yet. Kicking off in late 2016, and reaching completion in April 2018, the CX500 received a complete nut and bolt rebuild on top of a huge list of one off custom modifications. The end result shows a drastically lightened motorcycle pushing an impressive boost in horsepower, all whilst showing off a blisteringly unique aesthetic. Here’s how we did it. 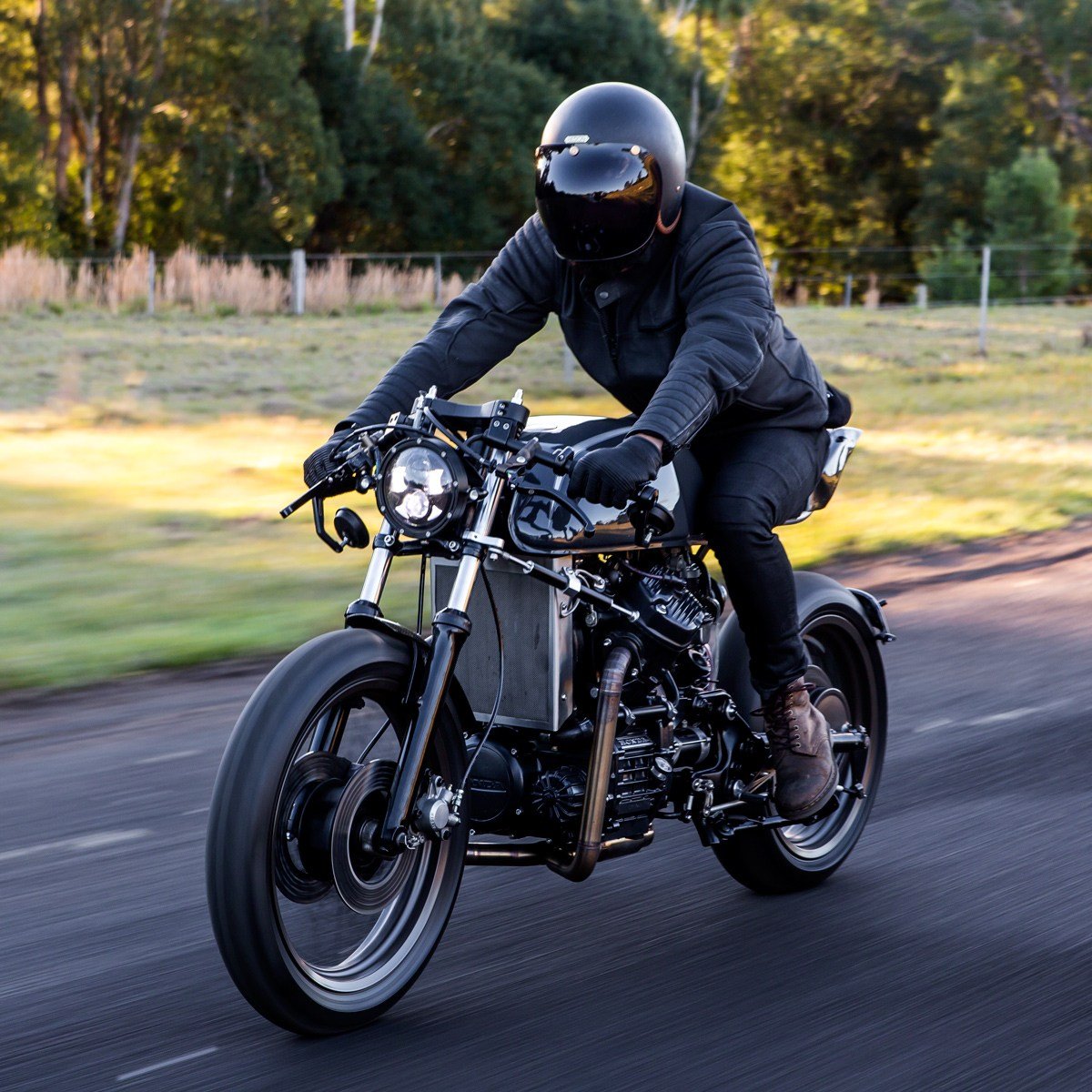 Michael wanted a custom like nothing else. I’d seen his previous bikes and he was no stranger to a more left of center bike. He was also very open to my ideas which gave me the confidence to get really creative. My build brief looked like this:

The CX is one of the most saturated donor bikes in the custom world today. Everyone has built one, but I didn’t want to take any cues from others. This build had to be mine, and like nothing else. I wanted it to be sharp, unashamedly modern, and a hot rod at heart. Modifications couldn’t stop at aesthetics, this thing needed to perform. 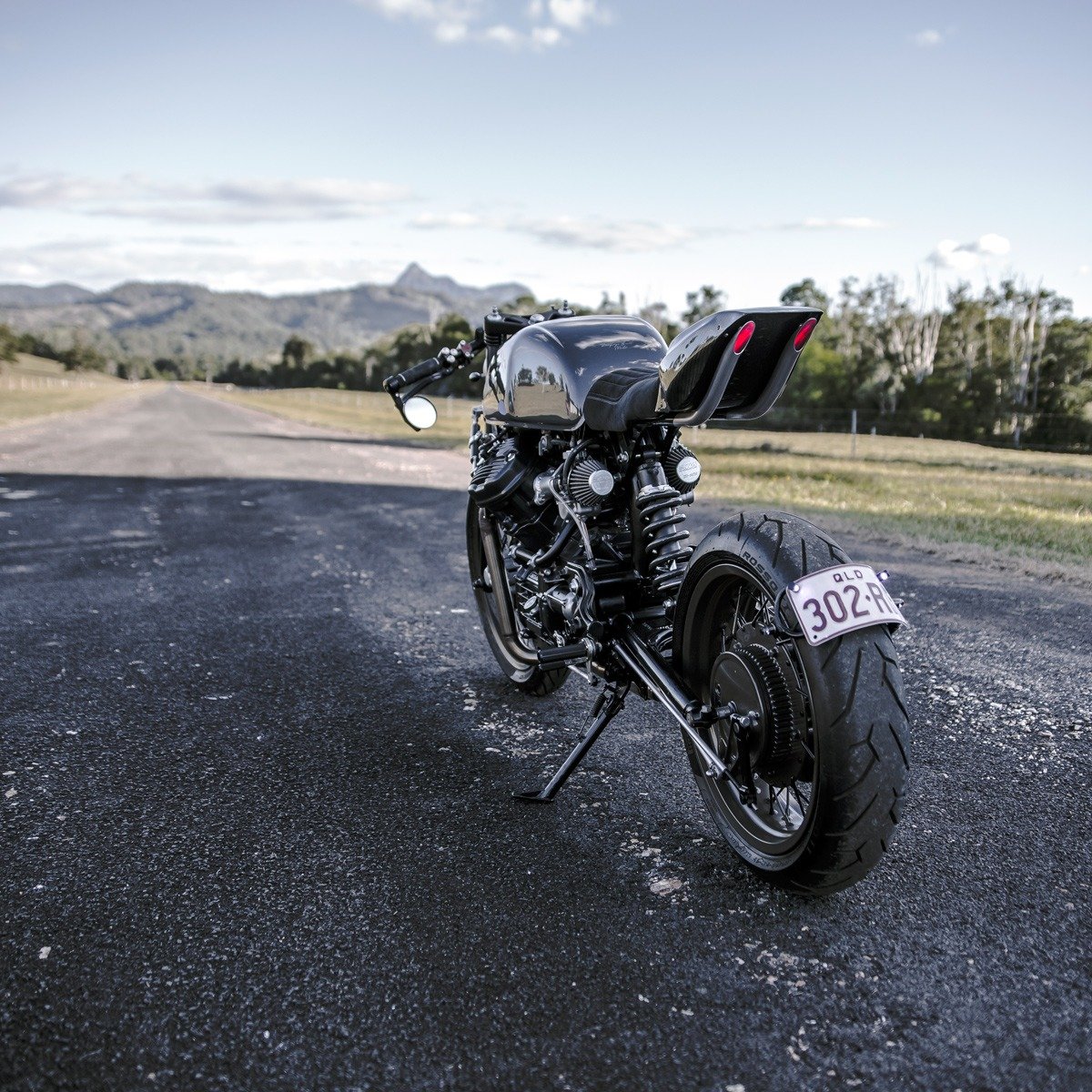 The Concept stemmed from an exhaust design I had, I modeled the exhaust in my CAD program and had it fabricated. A clean 2 into 1 header with a 2 up slash cut muffler on the end.  Having this fitted to the stock CX500C spurred my next idea; smaller, lighter wheels. The Honda was treated to some custom spoke rings on the stock comstar hub and laced to a set of Excel Alloy rims with Stainless steel spokes. Rear is a 17’ x 4.5, Front 18 x 2.25 wrapped in Pirelli Angel GT tyres. After the wheels, I designed a custom triple clamp up that lowered the front suspension about 50mm. 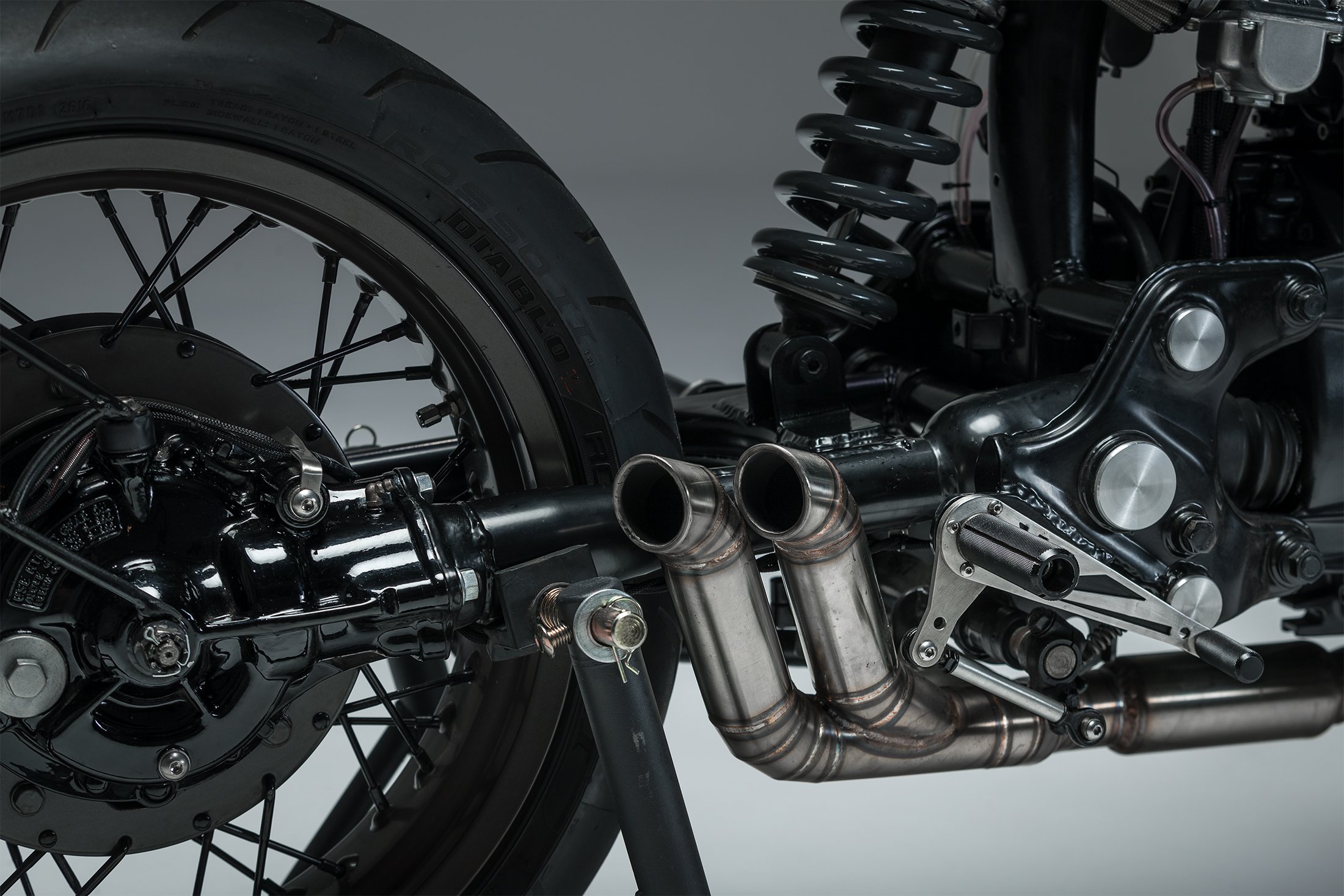 With the wheels and tyres on and the front suspension level set, I cut the rear sub-frame from the backbone and behind the foot pegs; removing it to make way for the monoshock conversion. The CX500 doesn’t speak to me for a classically styled bike, I wanted to re-think the way the tail was made so I set out specifically to not hoop the rear. The idea I landed on was a twin aluminium tube design that swept up similar to the exhaust design. It took a few tries with my tube bender but turned out just as I set out to make it. The open ended tubes house the tail lights and support the hand laid carbon fibre tail cowl that floats above it.

The sharp flowing cuts on the sub frame needed to be complimented by an equally definitive tail piece. Mounting a block of foam on the freshly bent and welded tubes, I set out cutting and sanding the cowl into shape. Then I fucked it up, threw it out, and started again. Second time round I had a little psychedelic help and it took shape in one session with an almost superbike inspired set of lines. 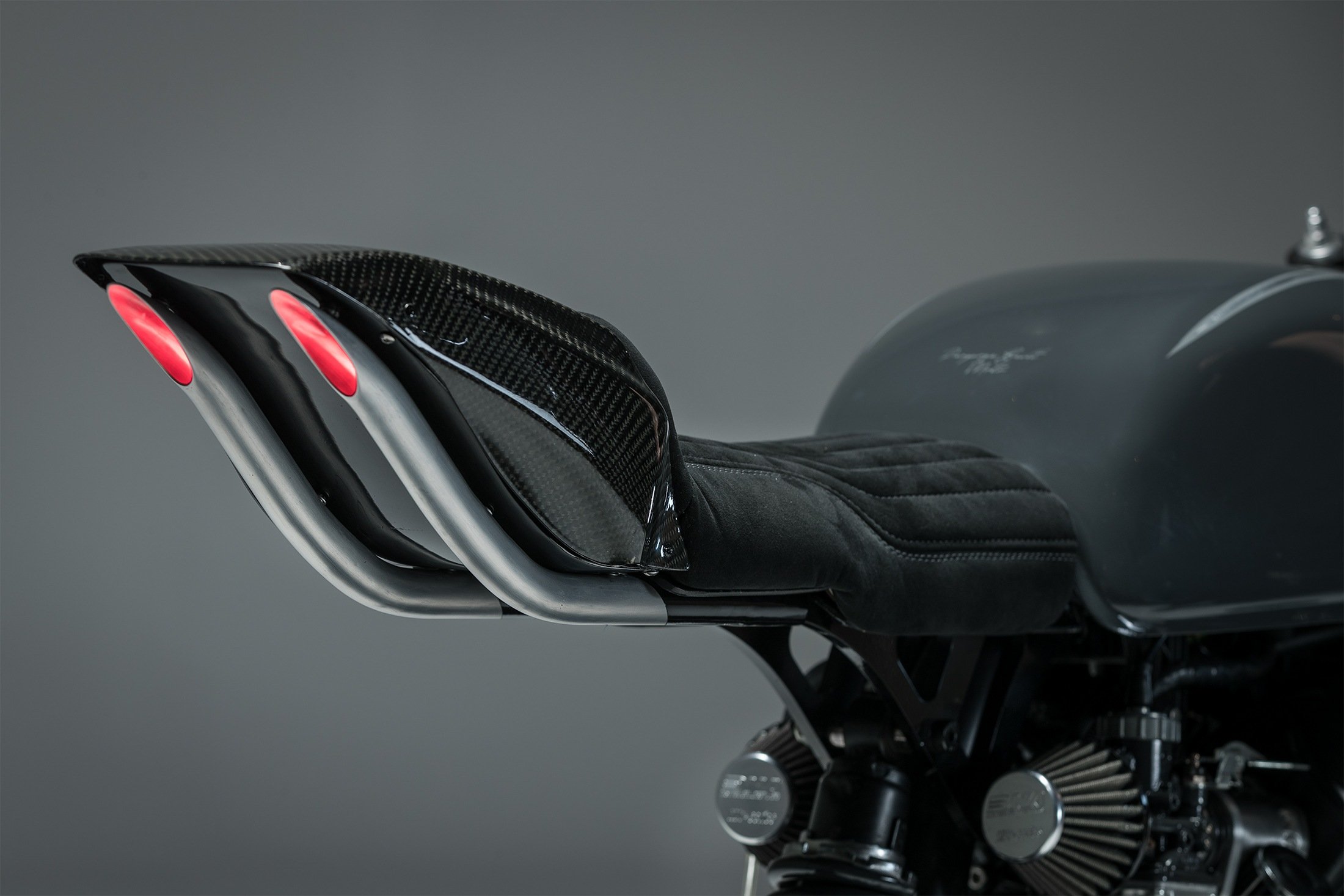 Often overlooked on a CX mod is the tilted back tank. Taking time to make sure the stance of the bike was right from front to back, the tank was dropped 18mm on the front and mounted slightly raised at the rear on the new sub-frame.

As the modern café racer design was coming together I was becoming increasingly excited about where the idea was headed. Once the major fabrication was finished, the motor was removed, stripped and vapour blasted before being rebuilt by my mate Jamie Webster. While this was going on, the custom rearsets were designed, cut and matching linkages were fabricated. 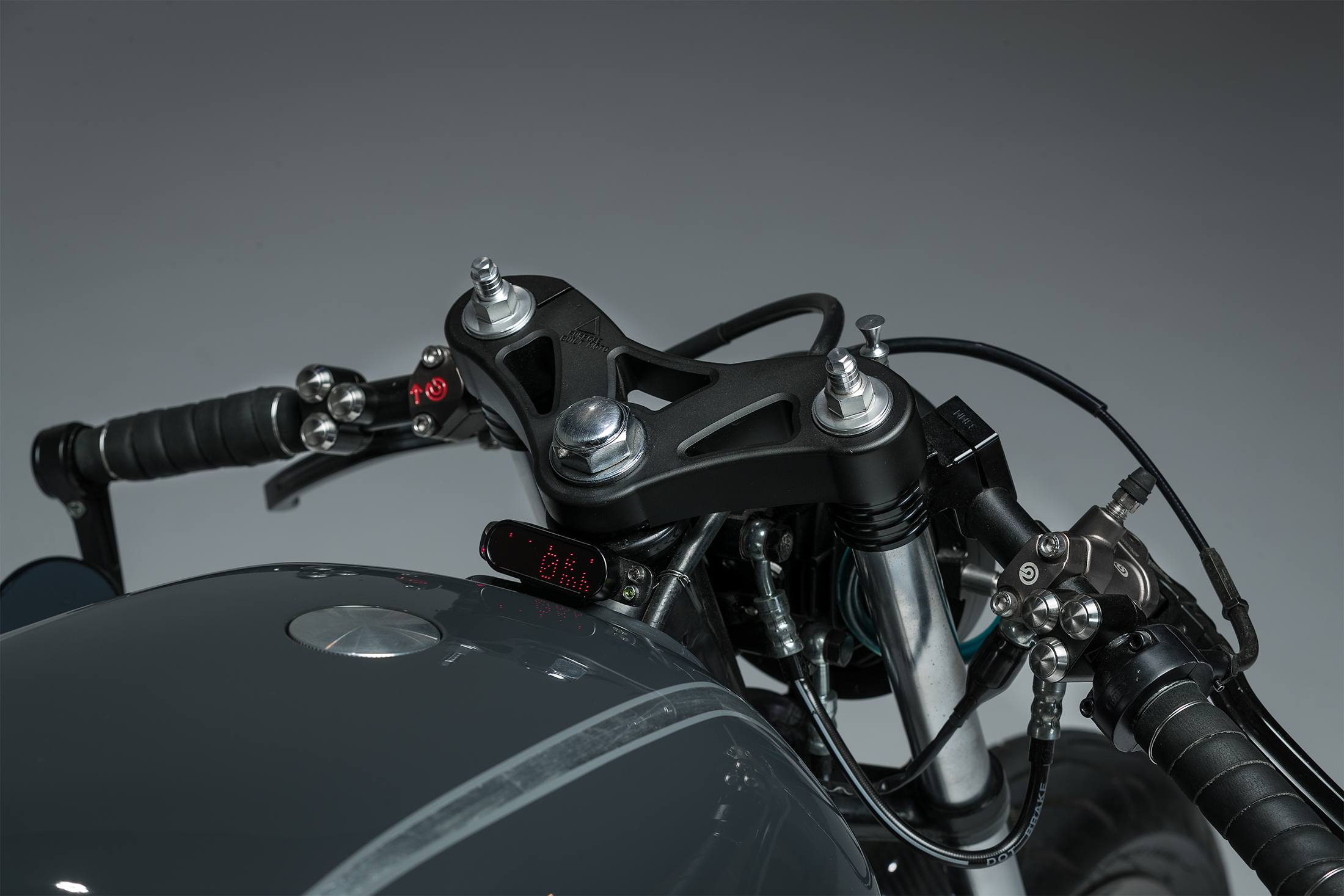 Moving to the front end, the forks were rebuilt and adjustable pre-load caps were fitted and a custom fork stabilizer made. The stabilizer also acts as the mount for the Carbon fibre guard over the front wheel. Having the bike sit evenly lower on the front and back, the standard rake/trail was maintained. However due to the drastically different riding position and the tucked clip-on bars, a steering damper was added to reduce the chances of head shake when pointing this thing around a less than perfect mountain corner. Custom stainless steel mounts were fabricated to achieve this and keep in line with the style of the bike. 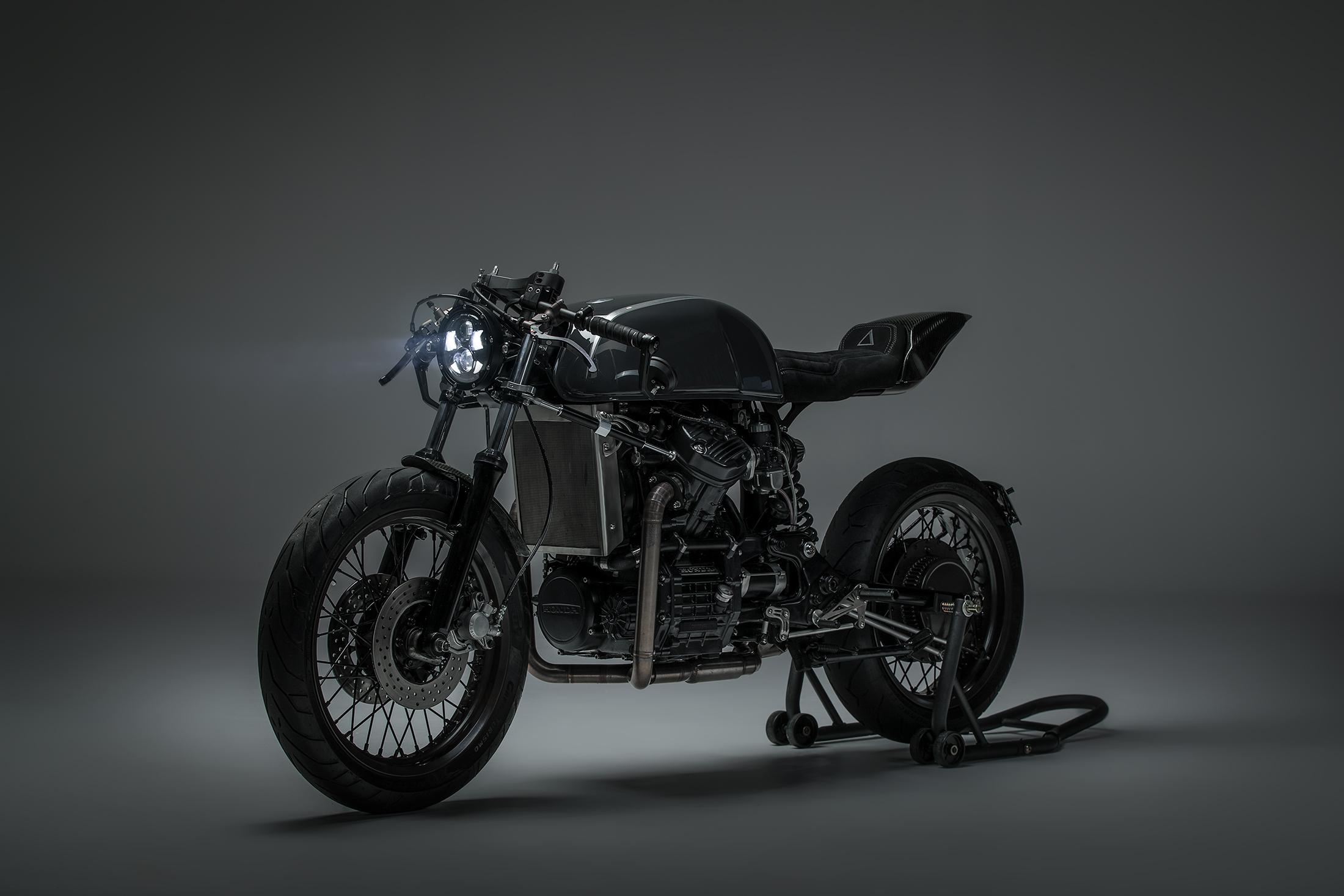 I received a set of upgraded carbs for fitting and modified the aluminium intakes to suit the New CX sub-frame. After which I got in touch with my mate Marios at DNA performance filters for some purpose built pod filters to suit the CX500. Some one-off DNA cone filters were at my doorstep from Greece within a few weeks. Being seen from the rear of the bike, they had to look great and DNA definitely delivered.

As the CX500 was being fabricated before getting stripped down for paint and powder coat I was thinking; “This thing is going to be a love or hate kinda bike.” Then I remembered I wasn’t building it for anyone but me and the rider. Anything creative tends to divide people but what really counts is how this thing rides, and what I think about the workmanship on it. 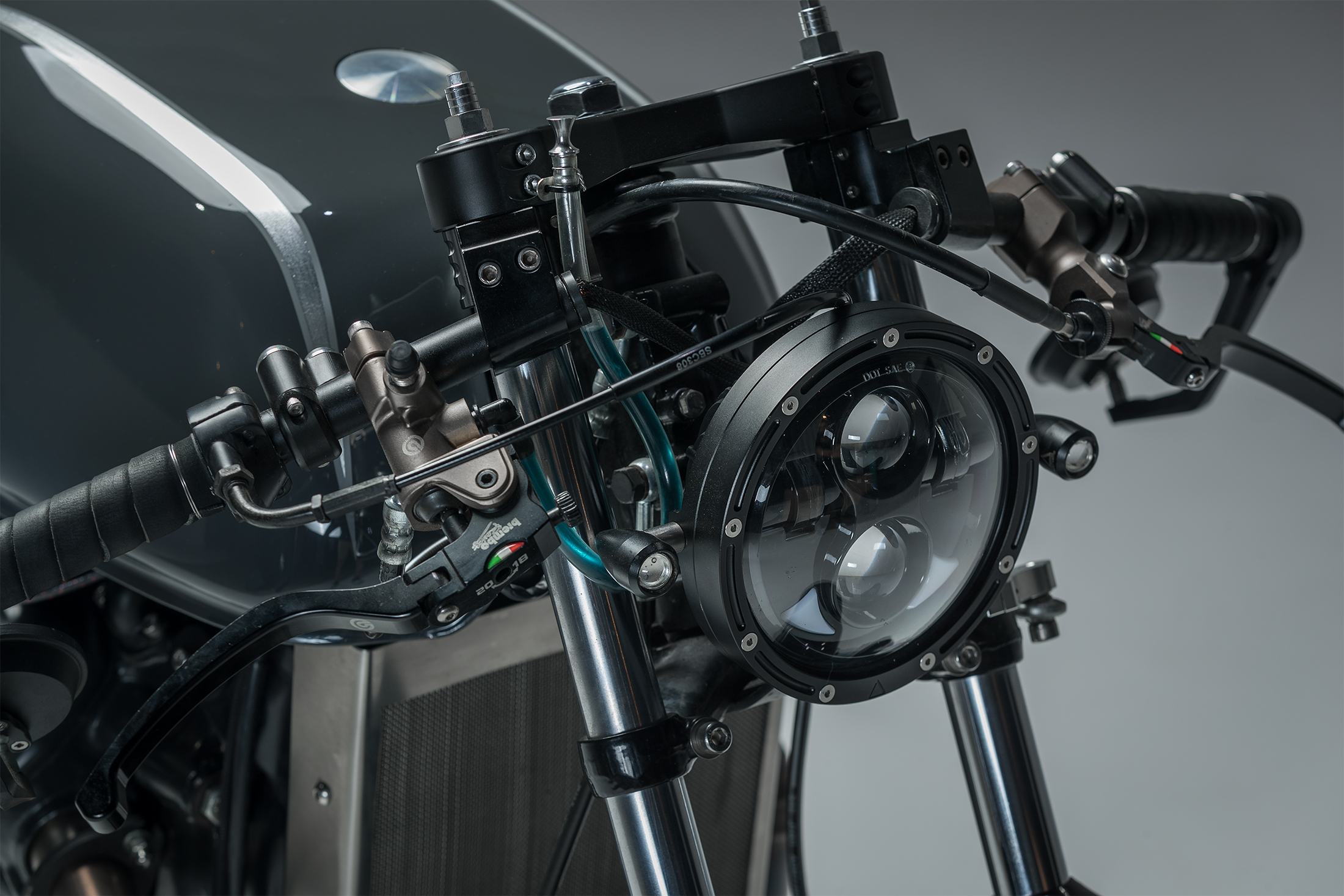 Hearing the freshly rebuilt motor breathe for the first time through the 2-1-2 exhaust set up was phenomenal, even on idle the bike snarls at you like a caged animal. Getting it on the road seemed surreal. Never had I gone in so deep on a custom motorcycle so the first ride was somewhat of a graduation. Having the growl of the longitudinal v-twin spit out the side while sitting on a bike, almost un-recognisable to where it started brought on a few subtle “fuck yeah”s uttered under my bubble visor that’s for sure! 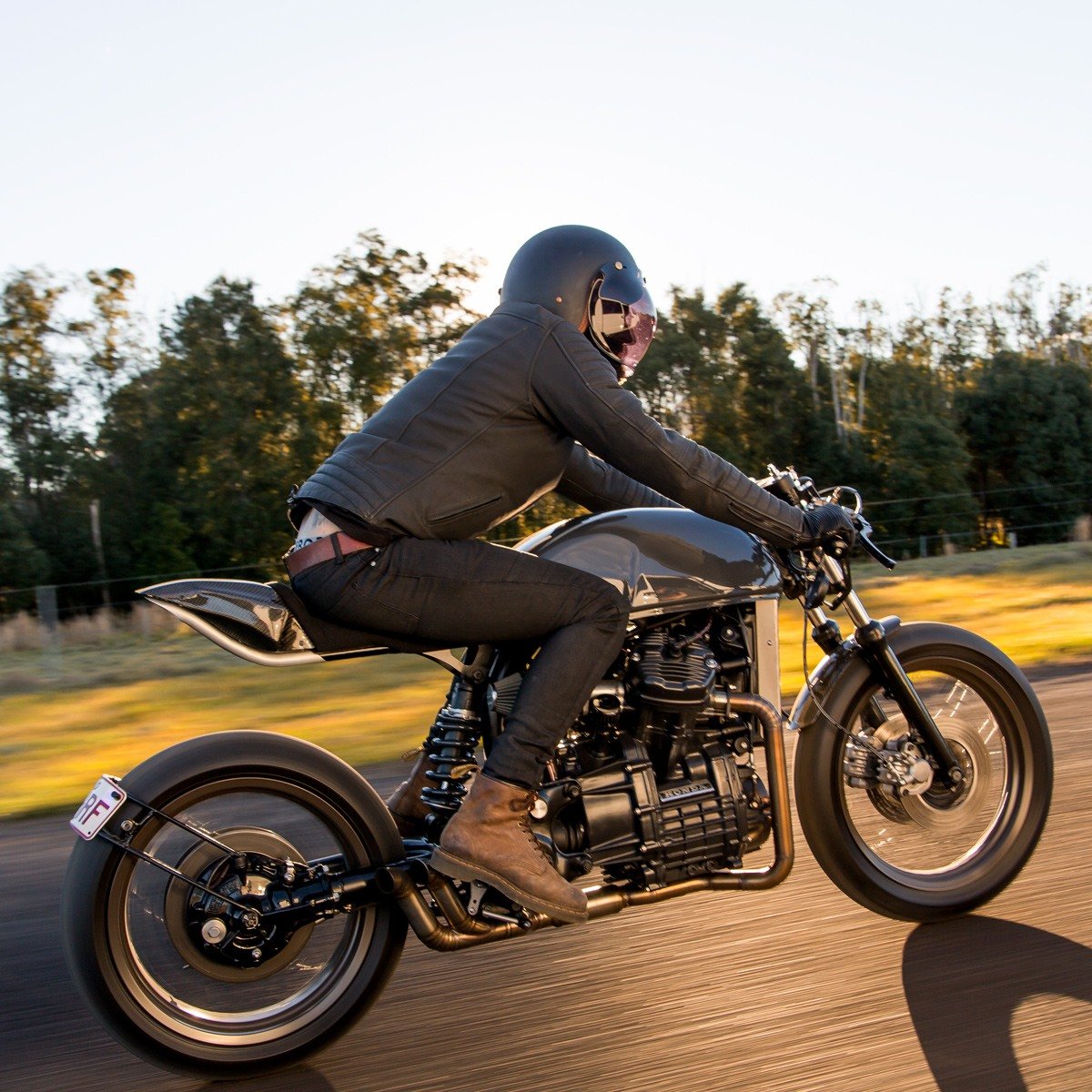 Check out the full gallery of the CX500 completed