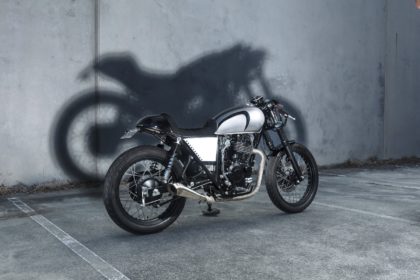 Al’s Bike came to me when he still had his red P-plates attached. His first bike, a Nemesis 400 just picked up from Smoked Motorcycles in Brisbane. I remember the feeling of my first street bike, you can’t stop smiling! It’s infectious, he loved this thing and was ready to start making it his own. 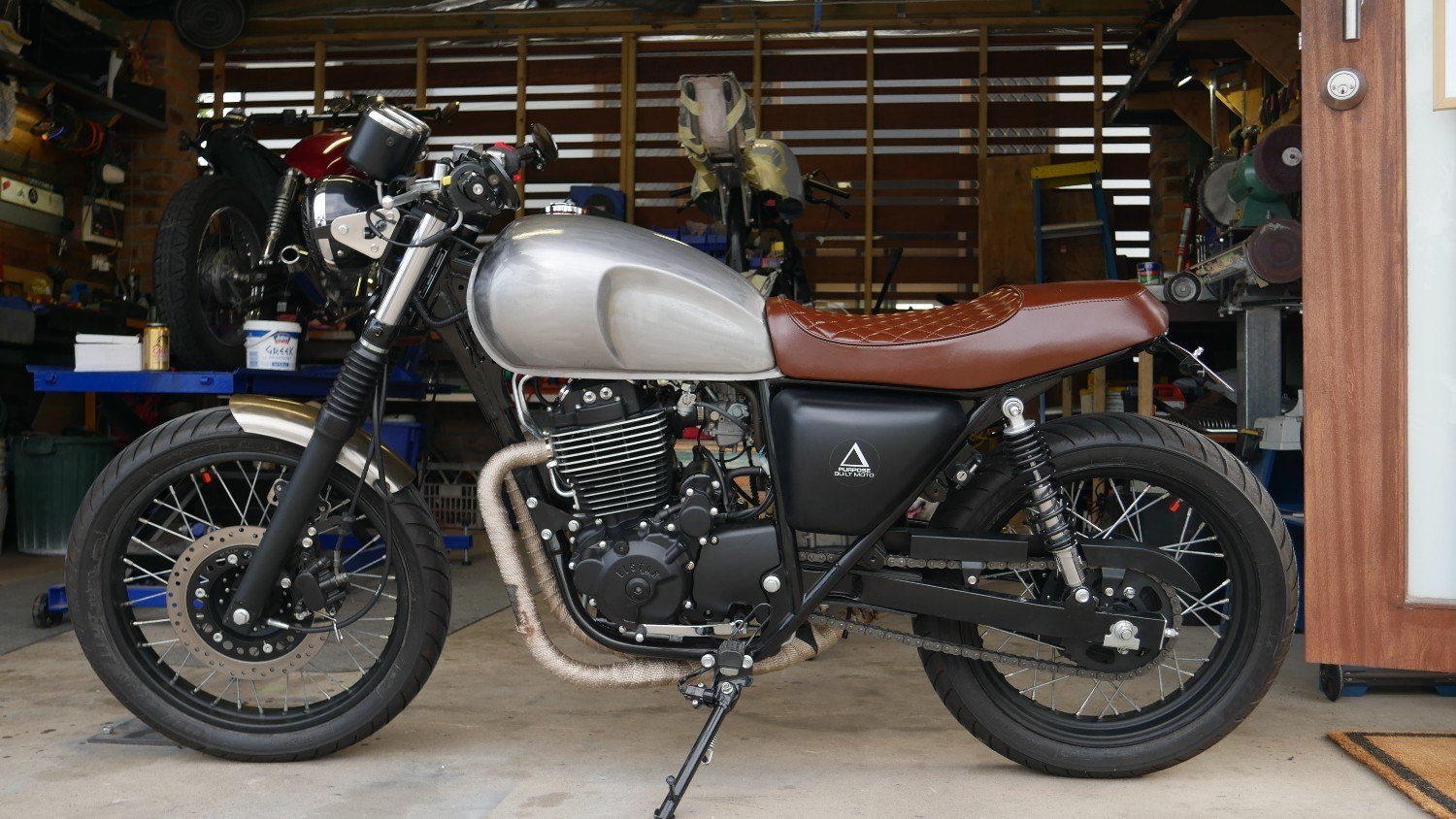 At first he just wanted a nicer note from the exhaust, I fitted up a tidy Highball Cone Muffler for him that gave it a more aggressive note, the 400cc Single cylinder based on an XR400 motor sounds great bellowing out of the 43mm Stainless steel can. I told him to get out and enjoy it as I was a little too busy to undertake any more projects at the time. It wasn’t long before he came knocking on my door wanting his Sol Invictus Nemesis 400 Scrambler to receive a full café racer conversion, check out our checklist for cafe racer parts for more info on the selection process.

It was an interesting idea to me, The Sol Invictus bikes are aimed as a gateway bike for enthusiasts to cut their teeth on. A simple engine, nicely layed out frame and marketed as easy to modify. I was keen to have a go as I’d not seen a Nemesis 400 that had received a facelift of this magnitude. 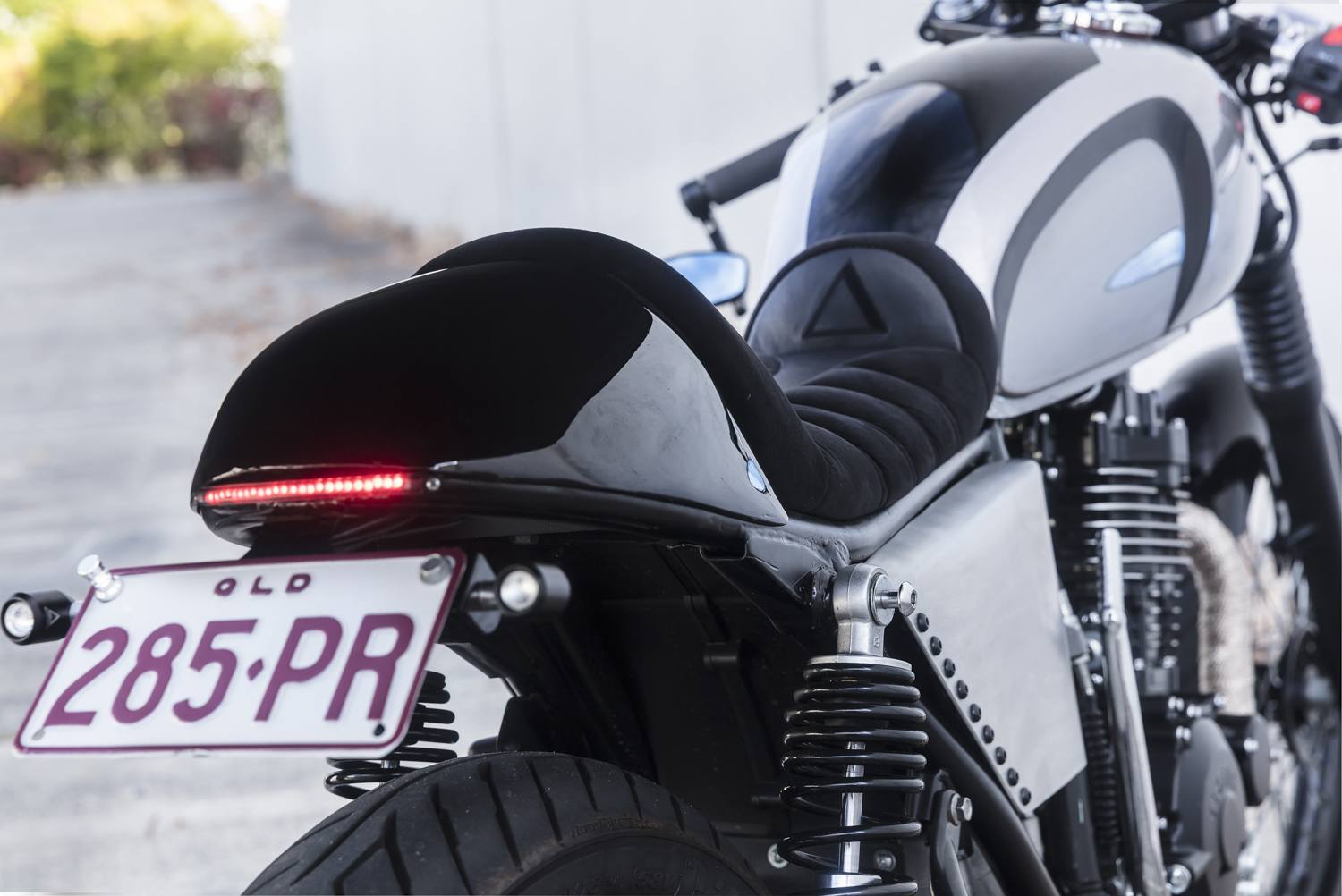 We spoke over a few things that were crucial to his needs, but for the most part it was left up to me.

The first thing to go was the fat brown vinyl seat, underneath that revealed a nice slim frame and factory tail hoop! Perfect base to start shaping the tail. I laid out my foam and pulled out my carving tools + sander, a few hours later the shape was sorted. I went with a slightly higher rise to suit the tanks flow. The tail was custom made along with a traditional style seat pan, all with hidden mounting and no visible fixing points. If you’re interested in a custom seat for your bike, get in touch. 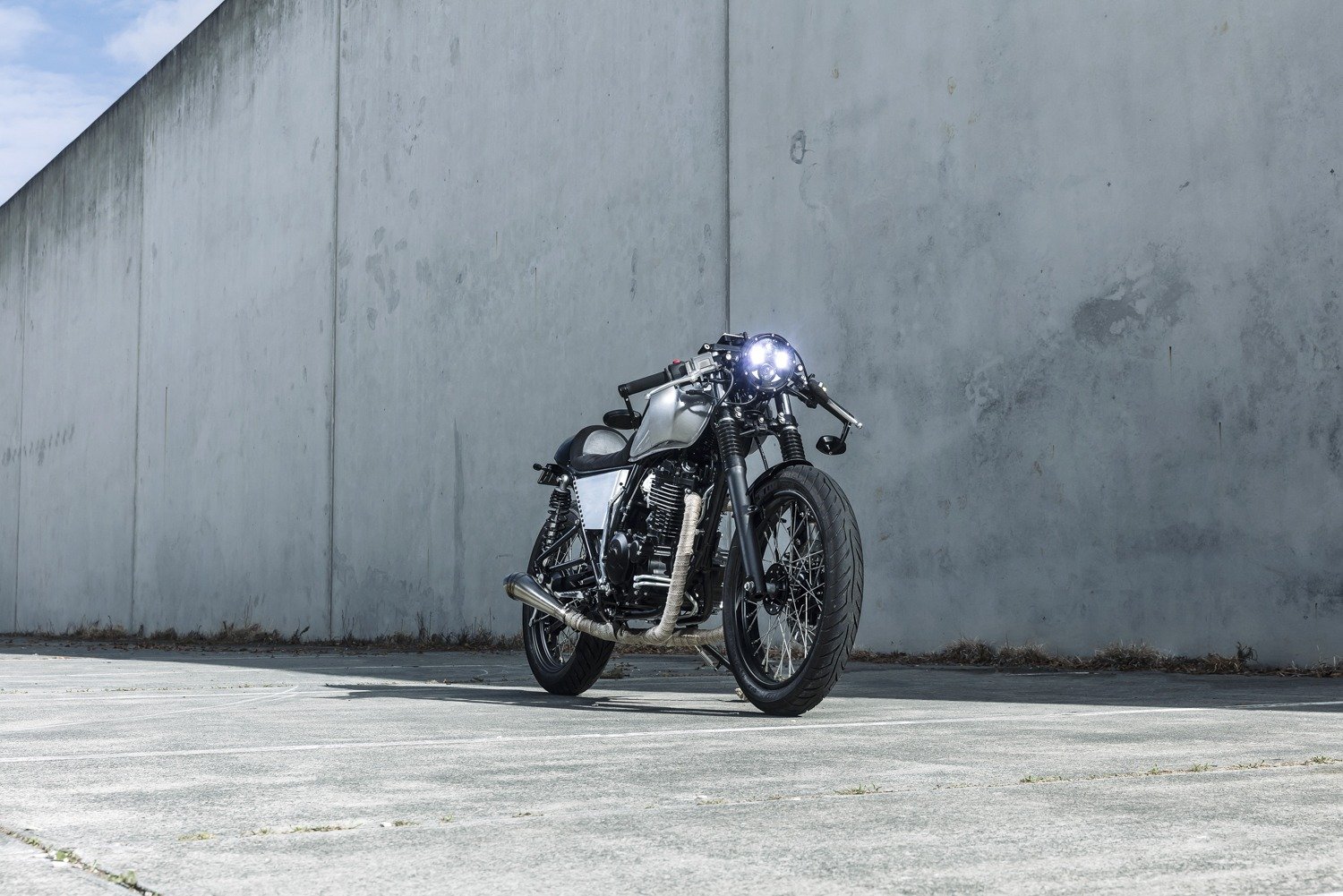 Next on the list was re-finishing the tank and front fairing. They had previously been trimmed (I think) so just needed to be rounded a little more. The tank was a raw metal finish, the paint had been stripped and hit with a grinder in a rough rustic finish. I was aiming for something a little more refined, but the rider had bought the bike on the appeal of a raw finish tank. The compromise was to have it finished with a fine orbital sand pattern and a black diamond detail that flowed with our seat design. 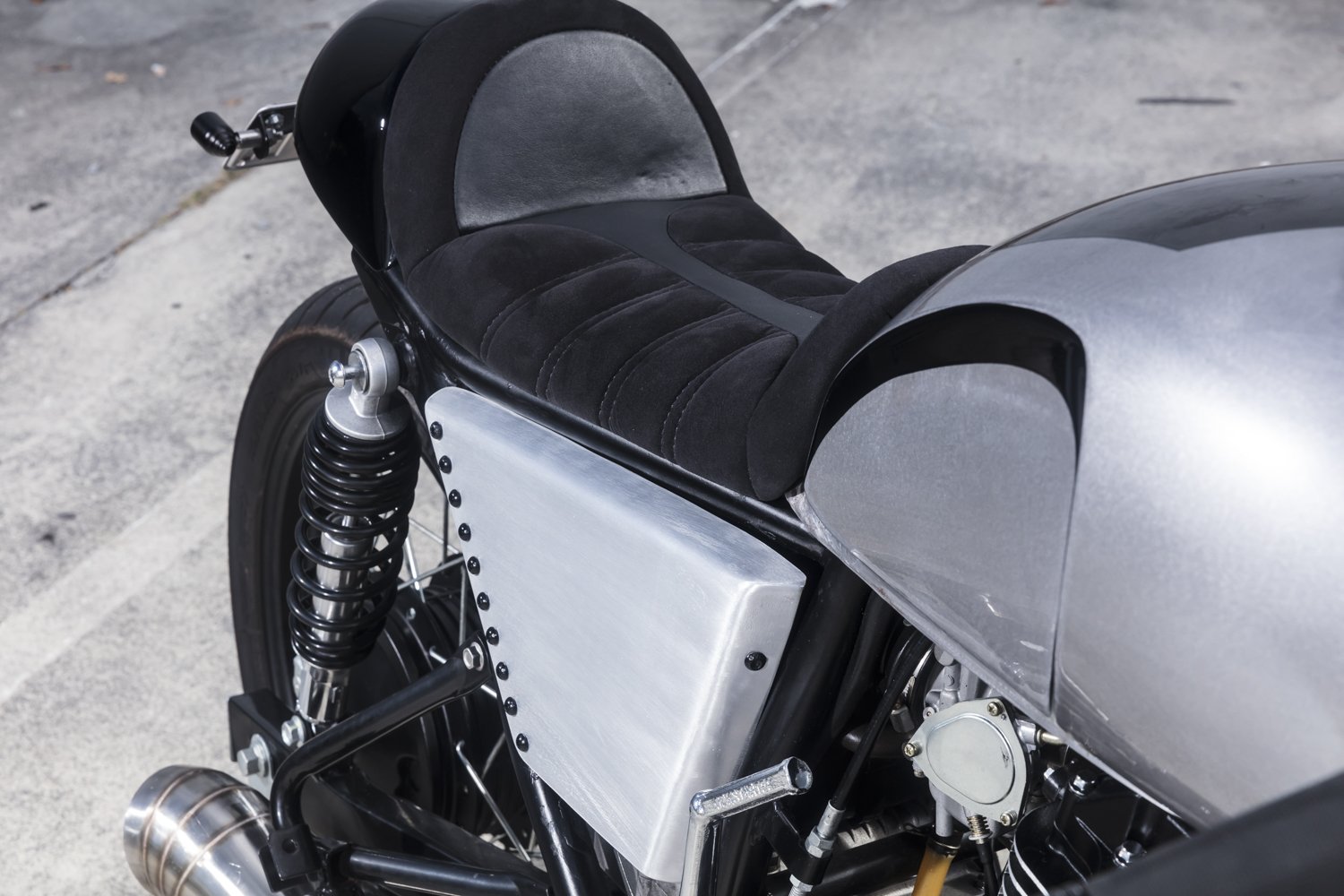 Usually, I would get my fabrication out of the way 100% before any paint happened but on this particular bike I hit a little mental issue, the bike builders equivalent of writer’s block (Bikers Block??). Anyway, I was stumped for what to do with the custom side cover I needed to make. I decided to press on with fitting the new LED headlight and signal system, the KOSO digital dash and designing the seat.

The seat was foamed and shaped and I sat down with my ever creative upholstery guru Jameson to nut out a design. As long as I have a picture in my head, he can put his spin on it and make it happen! We settled on a super plush Black Alcantara design complimented with some low sheen black leather. Sitting proud is the embroidered PBM Delta. Purpose Built Moto is now offering custom upholstery work and leather in house, on any seat, not just the bikes we build! 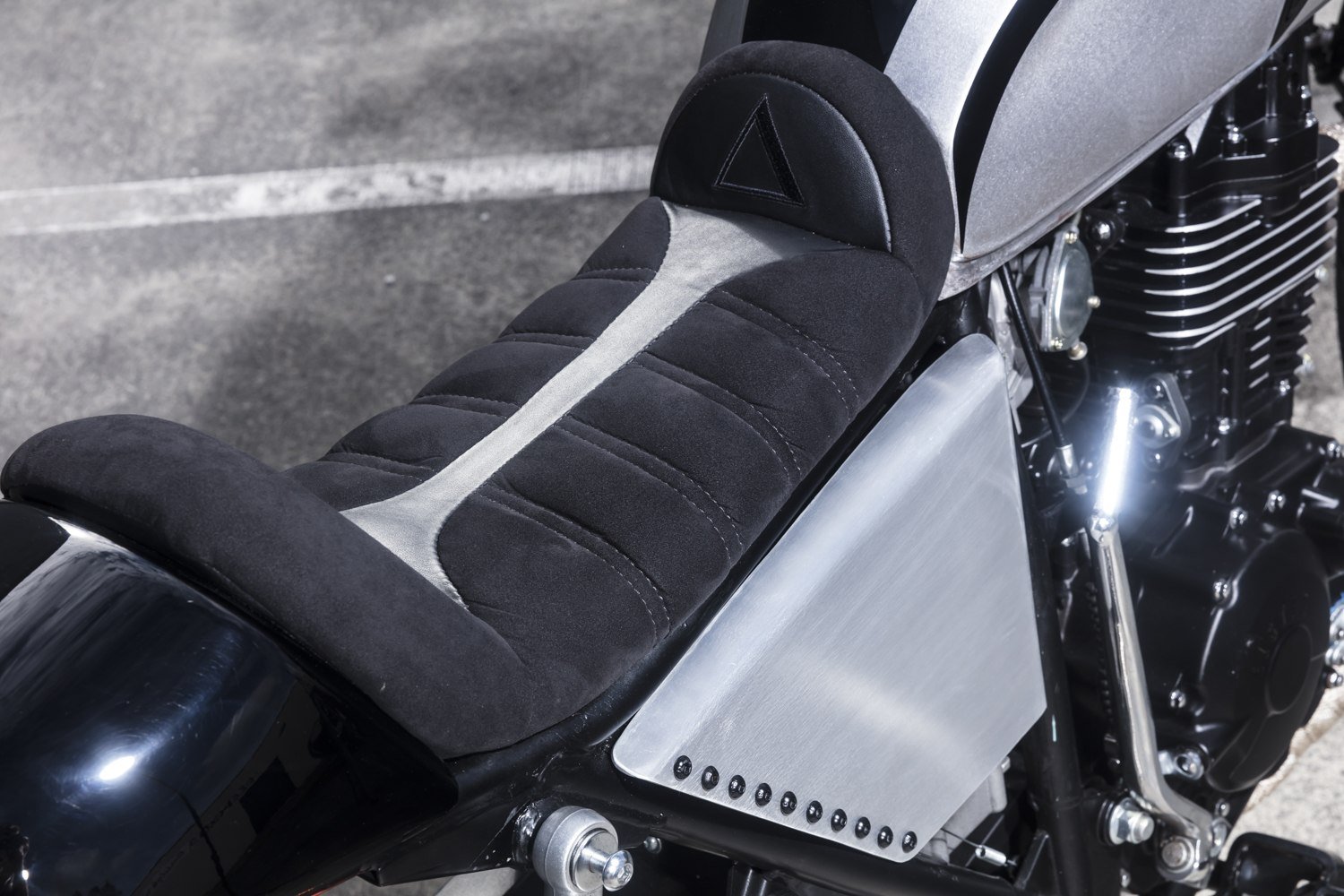 So that part was dusted, now onto mounting the dash. Café Racers need drop bars, clubmans are lazy so clip on’s are my only option. With that, unless you machine the old triple clamp down or custom make a new one you’re left with a garish set of half bar clamps sticking out like dogs balls on the front of your bike. With some precise measurement and a dose of that faithful dumb luck, the digital speedo fit right in there, all I had to do was cut and shape a tidy mounting bracket to house it and the dash was sleek and clean. 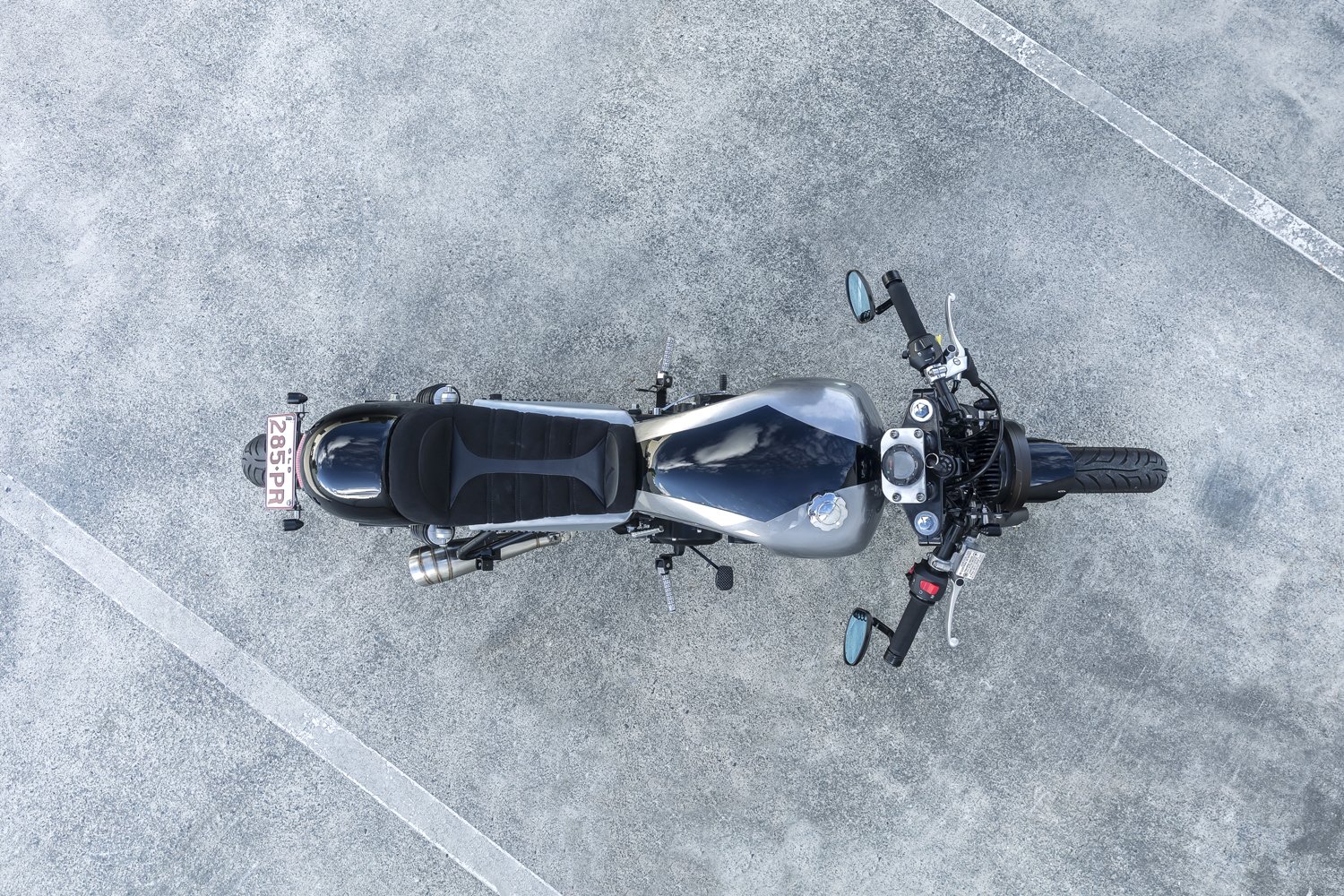 The Sol Invictus 400 received the 5.75” Flashpoint LED headlight, and the Beehive LED turn signals. Our headlight will mount up as a straight bolt on fit, however, if there’s room to move there’s room for improvement. I like my lights tucked as tight as possible, so I trimmed up the existing mounts and lost 40mm to tuck that LED beauty right back where it belongs. 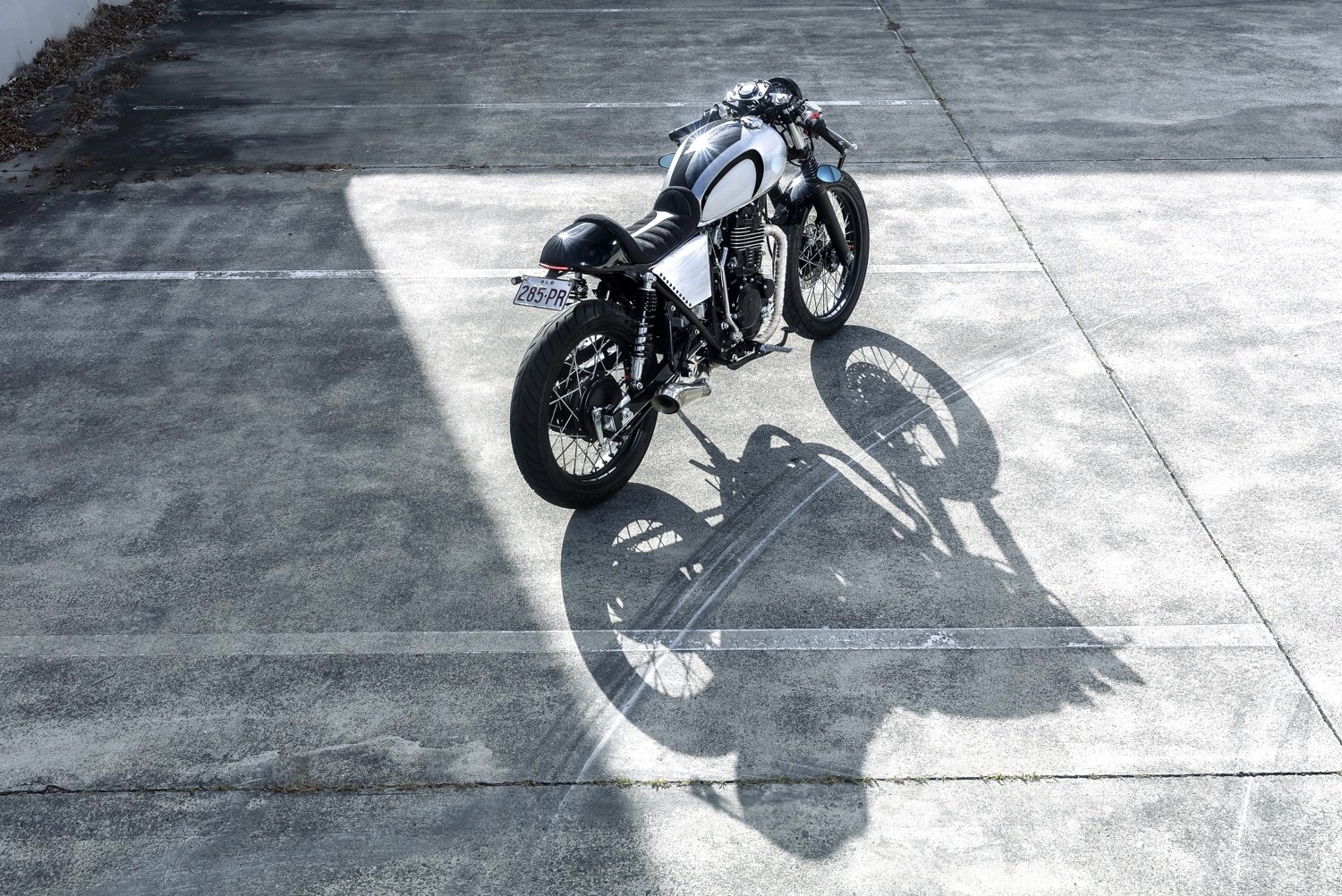 As I completed the wiring modifications I sent the tank and tail out for paint. Once I received the tins back in their new colours my bikers block was set free and the side cover design hit me like a ton of bricks. The Stock Nemesis covers are a nice shape, but once the seat is slimmed out they protrude outside the frame about 35-40mm each side, leaving the bird’s eye view ruined by these huge steel bubbles. I have recently taught myself (very loose term) the art of ally welding. I had some 3mm sheet in the garage so I patterned a design and got cutting and welding. The design is quite angular but its most importantly slim, the sharp lines I wanted to compliment the tank’s black paint detail and the black studs tied it all in together. The mounts had to be cut and custom fabricated then the side covers were brush finished and left raw. 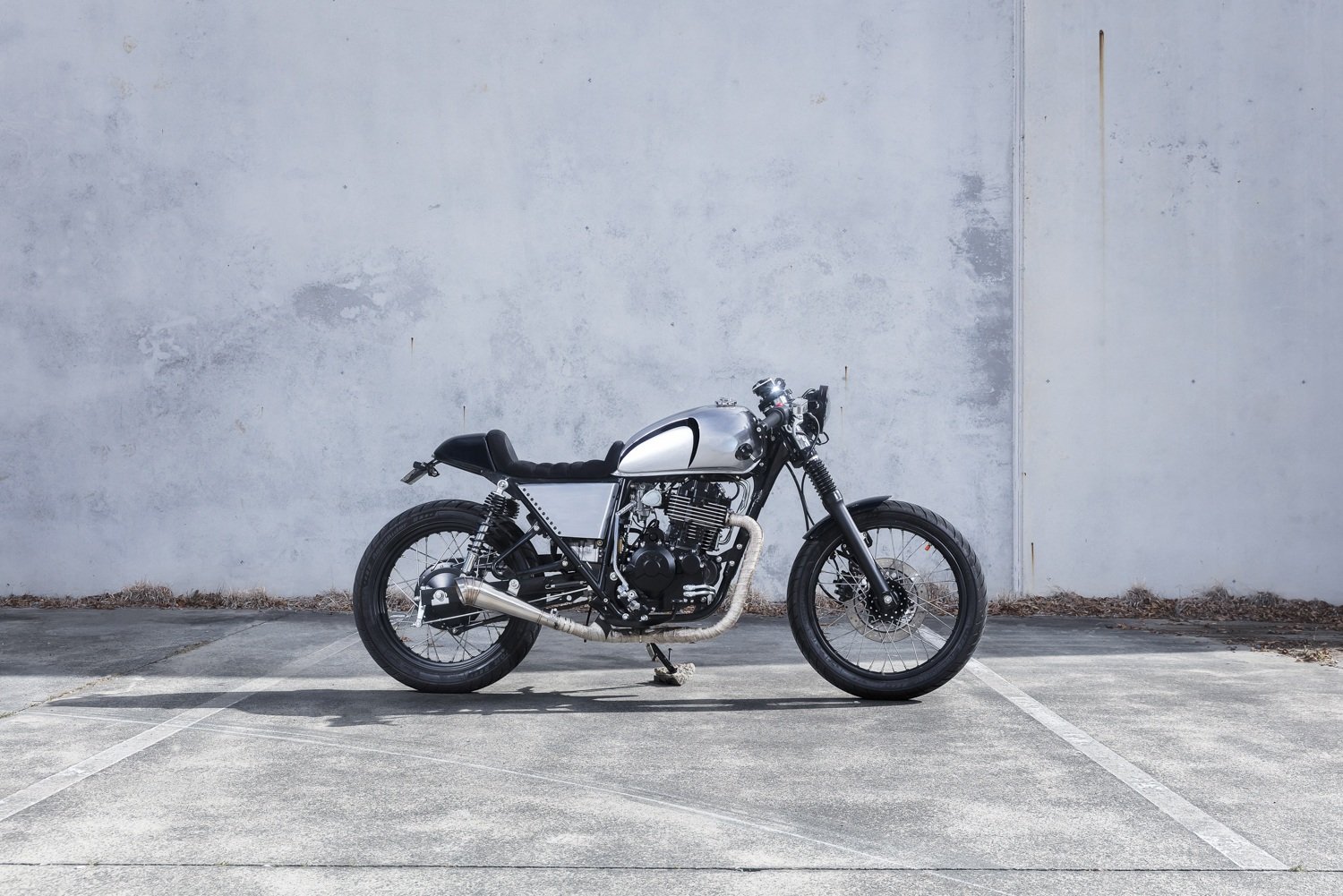 It was a great feeling seeing Al’s eyes light up as the garage door opened when he first saw the bike. I’ve got a few customs under the belt now but I think the excitement for this one takes the cake so far! He now rides it to work, to lunch, over the hills on weekends, down to the bar, out for dinner, to your mums house, to my mums house, and to all our Motosocial gatherings on the Gold Coast. He’s really getting his money worth out of it and I couldn’t be happier for it!

Check out the full gallery of our custom Nemesis 400

Check out the video of the Nemesis 400 build 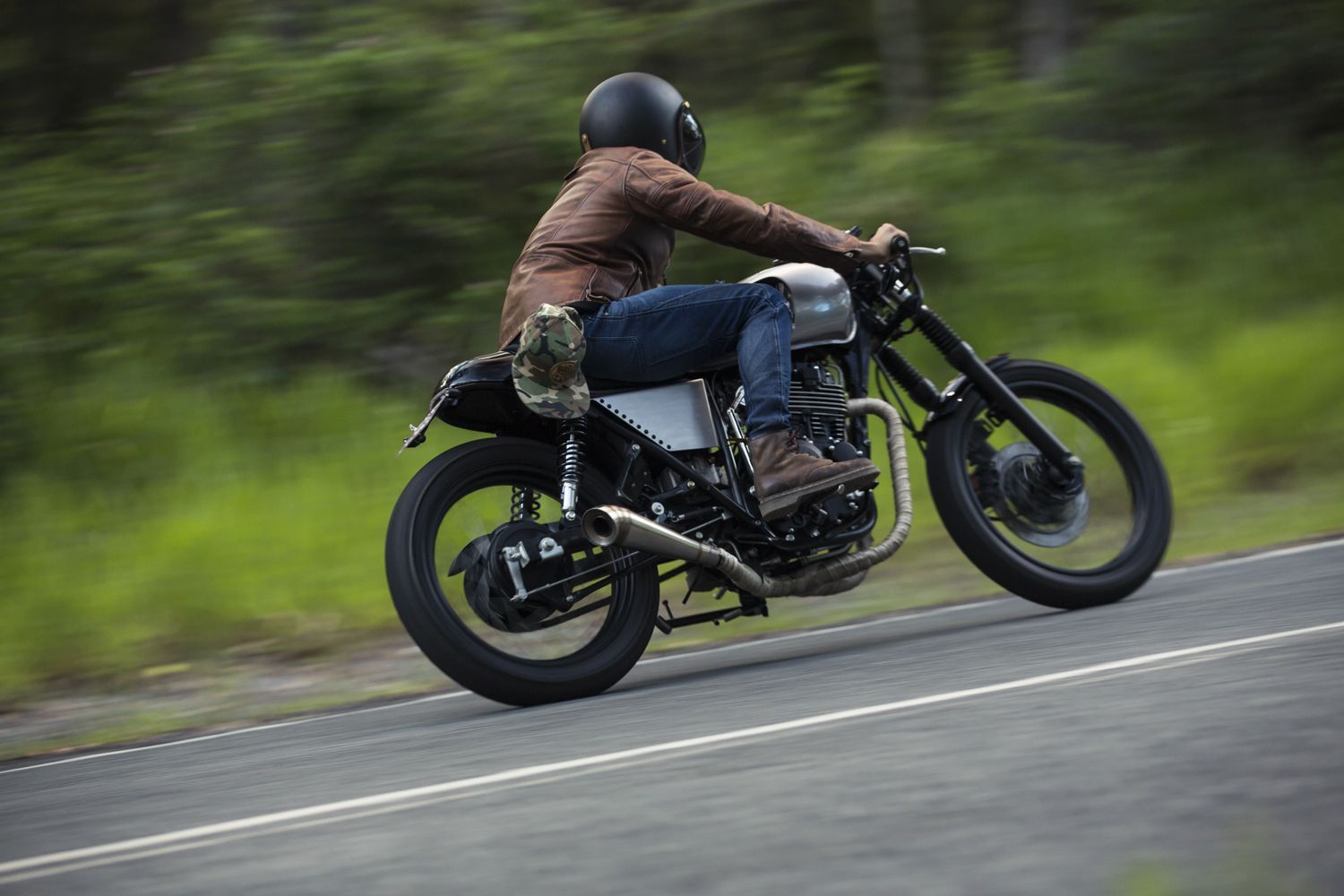