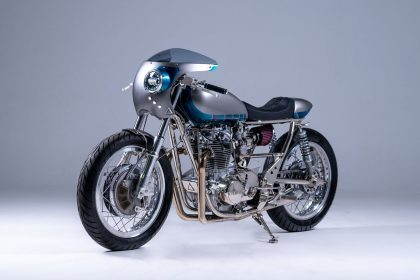 The Purpose Built Moto Signature series has been occupied by a distinct style of motorcycle. Starting with the CX500, then the Ducati GT1000 and most recently our Harley Davidson Sportster scrambler. Although very different each bike having a decidedly modern edge. With this XS650 Café Racer, the Signature series takes a classic turn. I’ve been working on this style of motorcycle for a while, learning what works for me in terms of Style, Rider Experience and Performance.

This XS650 represents my collective experience and learning on what a classic motorcycle should mean and feel like for a rider. I was never present during the time these bikes were stripped and raced, so all I have to go by are images and stories I hear. Speaking with the client Paul, he wanted an object of beauty that would create a desire to ride. With the desire this bike conjured it would need to deliver. When this motorcycle wasn’t on display it would have to be ridden on road and taken to the odd track day. 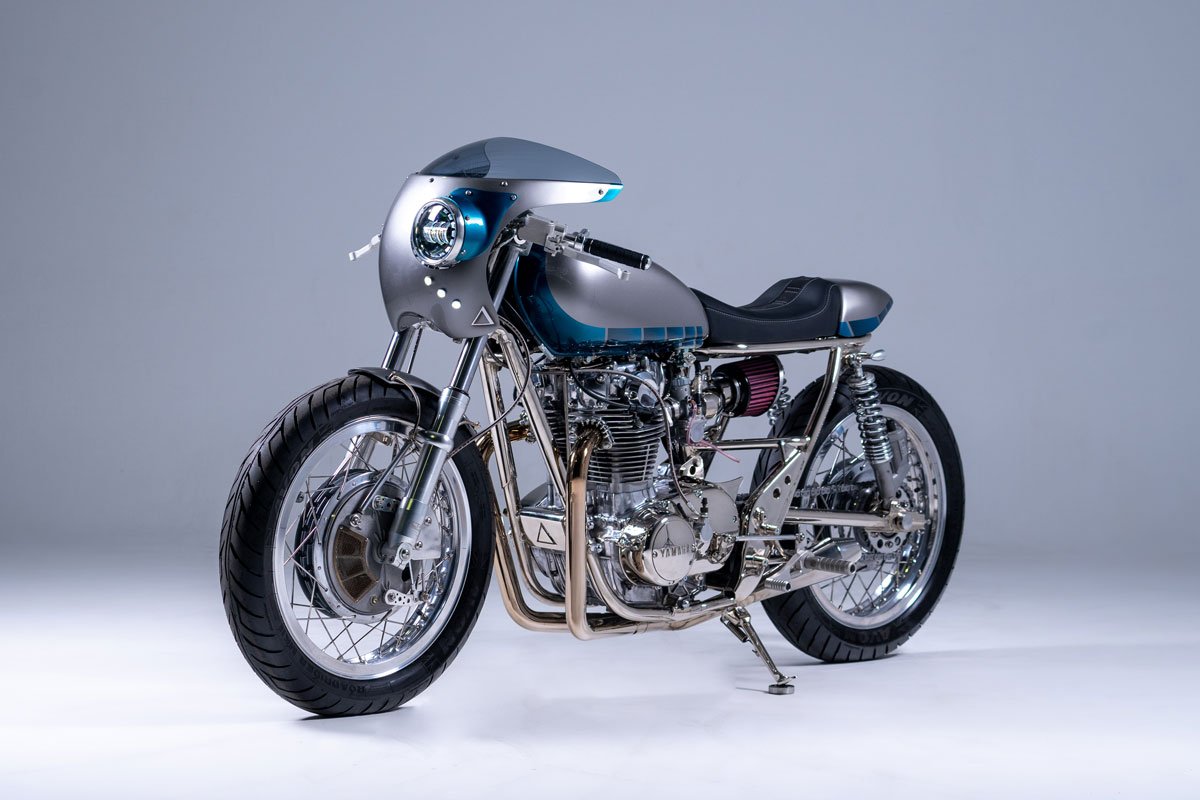 With these in mind I got to work on designing and creating the first in our signature series with a vintage feel. I worked at creating a timeless piece that would feel at home for a rider young or old. Something that people across a family’s generations could be enamoured with.

The process started with the wheels and suspension. This XS650 was pulled off the track some time ago but still had some great period gear on it. We’ve used the original tank that came with a retrofitted flip up fuel filler, and saved the Marzocchi rear shocks as well. There are vintage piggyback units that were hydroblasted, rebuilt, and internally customised to perform a little more like a modern shock while keeping that beautiful classic racer styling. 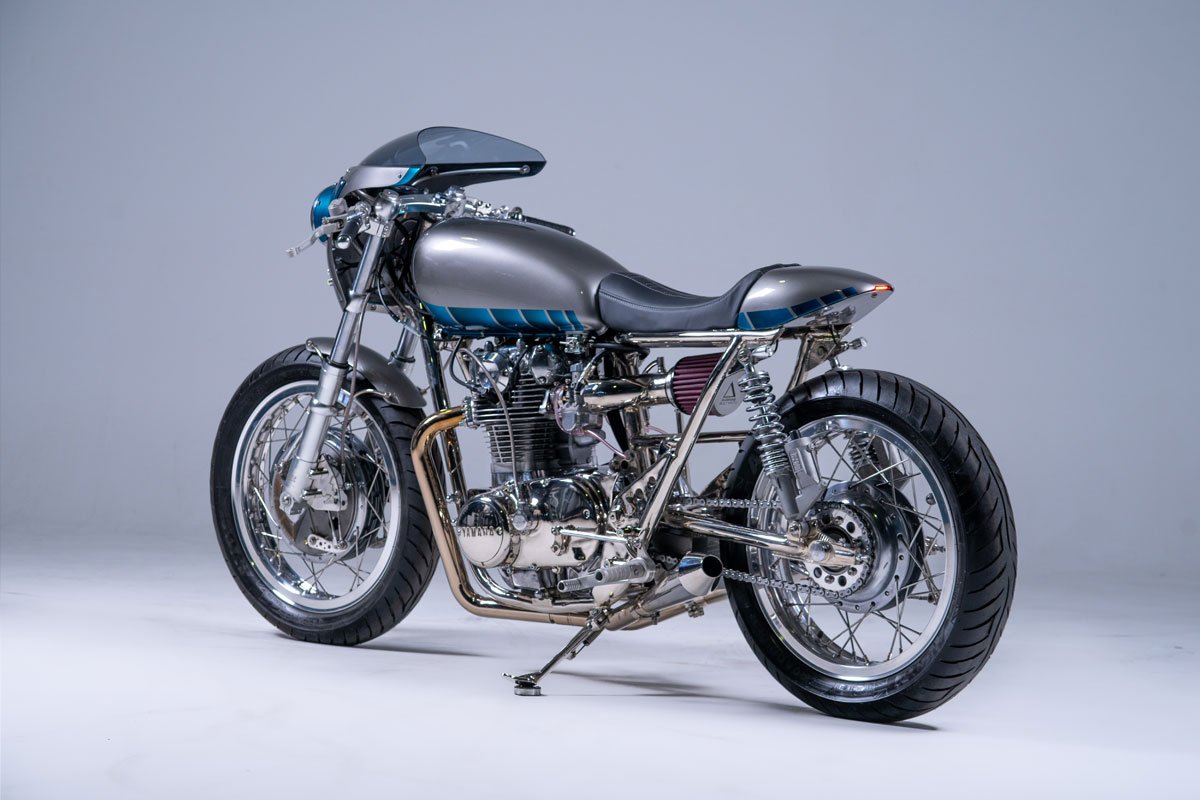 The wheels were stripped and rebuilt using a set of 18” Borrani rims. The rear drum hub was retained, the front was swapped with a quad leading shoe 230mm Robinson Drum Brake, linked up to a set of 38mm Ceriani Forks and Custom triple clamps.

The front forks are the Disc brake Model, which allowed me to have the mounting points I needed for the most exciting idea I had for the project. In the past I’ve been left underwhelmed by the performance of cable operated drum brakes. To address this I wanted to build a hydraulic drum set up, but keep the traditional look of the Robinson drum. 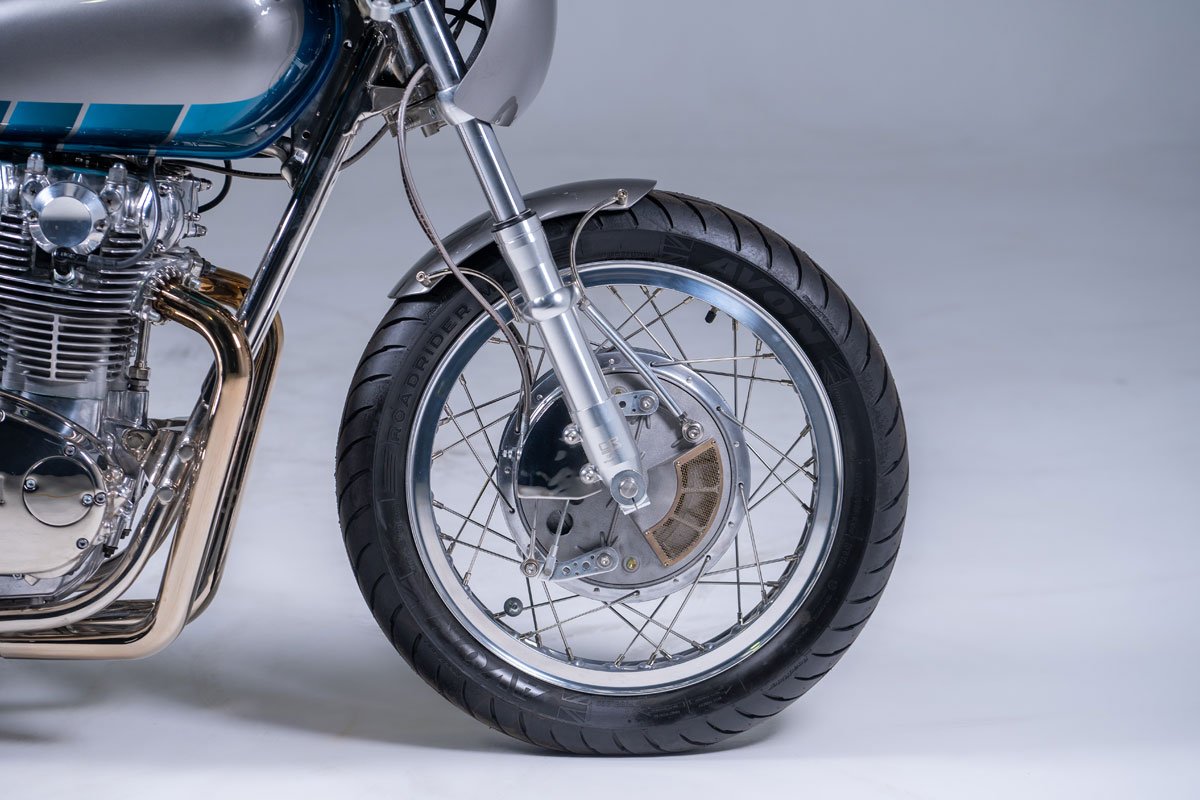 Using some slick fab work, I’ve built a pair of brackets/covers that house the hydraulic actuators behind the forks. The XS650 Café Racer also runs a Hydraulic Clutch conversion I did using a Ducati GT1000 slave cylinder. Both running through a set of Accossato levers. 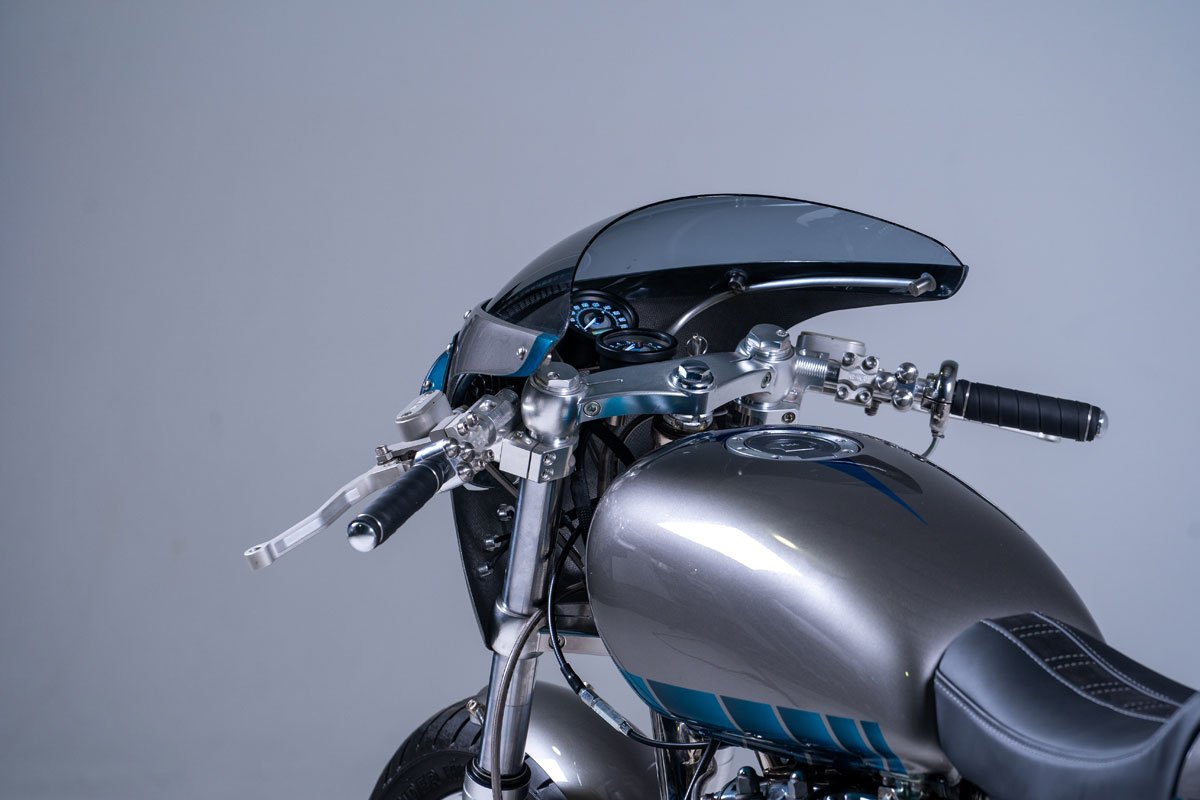 The Frame of the vintage Yamaha was stripped bare, modified for the shorter tail and given a few key details to make sure once the nickel plating went on it would become a central part of the styling. With the factory welds smoothed out and any imperfections cleared, the footpeg and swing arm pivot area had some cut outs added to reduce the bulk. A set of custom brackets mount the mild rearsets linked up with hand made cables and shifter linkage.

With the bike sitting how I wanted it, I turned my focus on the engine, intake and exhaust. The XS650 has been revived with all new internals, and given a bit of extra go with a ported head, 700cc HOOS racing kit, Shell #1 Cams and A set of VM34 Mikuni carbs with some light tuning at Dynomite moto Made 52HP at the rear wheel. The Intake has been specially made between Purpose Built Moto fabricating the custom 2-1 intake plenum and DNA filters creating a 1 off masterpiece of an air filter. Thanks to Marios and Dino for their amazing work going into that air filter. 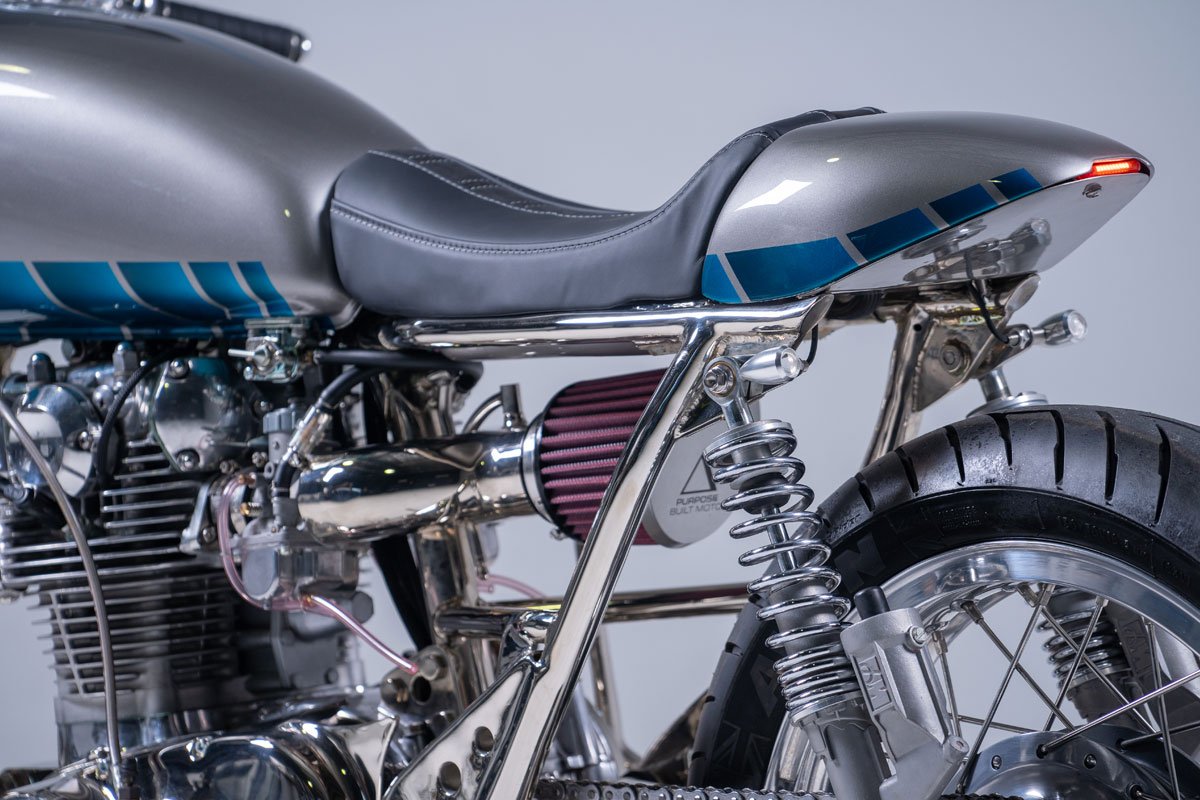 The wiring and electronics have been rebuilt using updated ignition and charging systems, Lithium battery and the Purpose Built Moto Black Box to control the lighting and switch button functions.

The Engine’s main cases have been nickel plated to match the frame, with the rest being stripped and high polished before the rebuild. 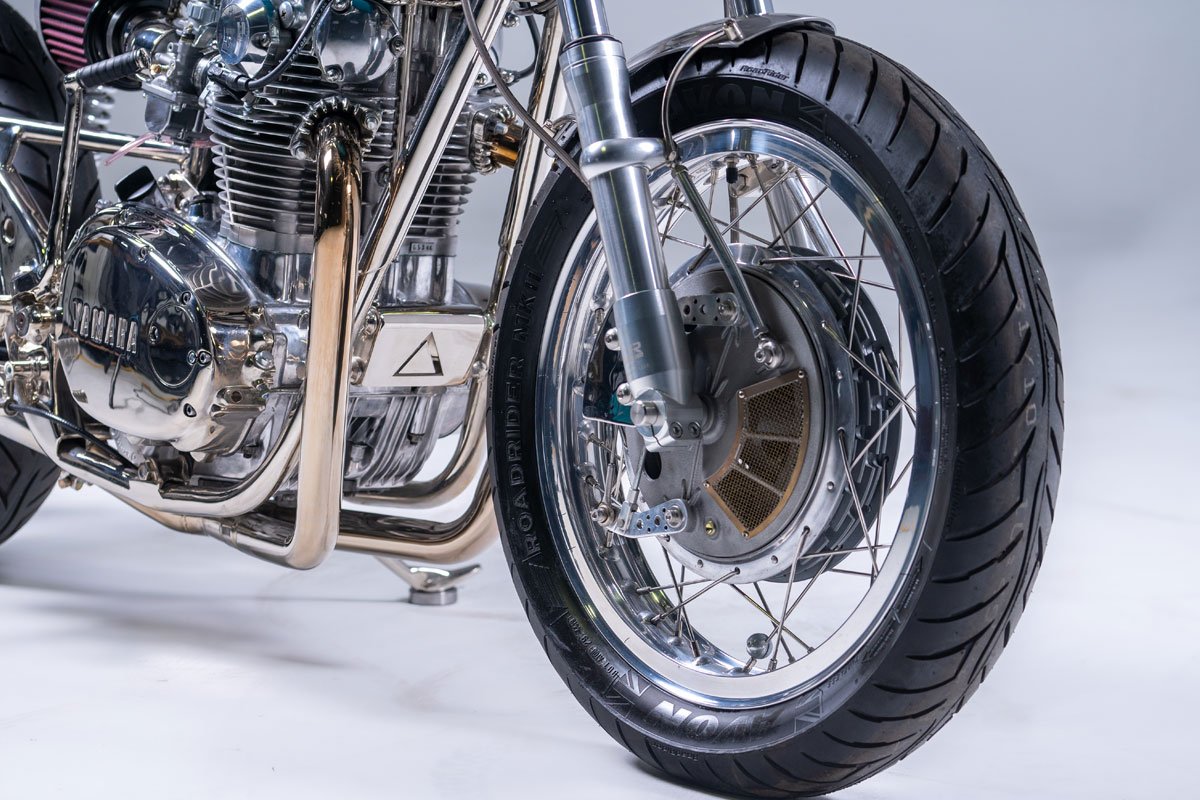 The XS650 Exhaust was kept simple and Symmetrical. The 2 into 1 into 2 system was built in-house from 316 Stainless steel, with an X-pipe under the engine that finished with 2 x PBM torpedo mufflers. All polished to perfection before getting a clean and heat cycle to ensure a nice straw gold colour. 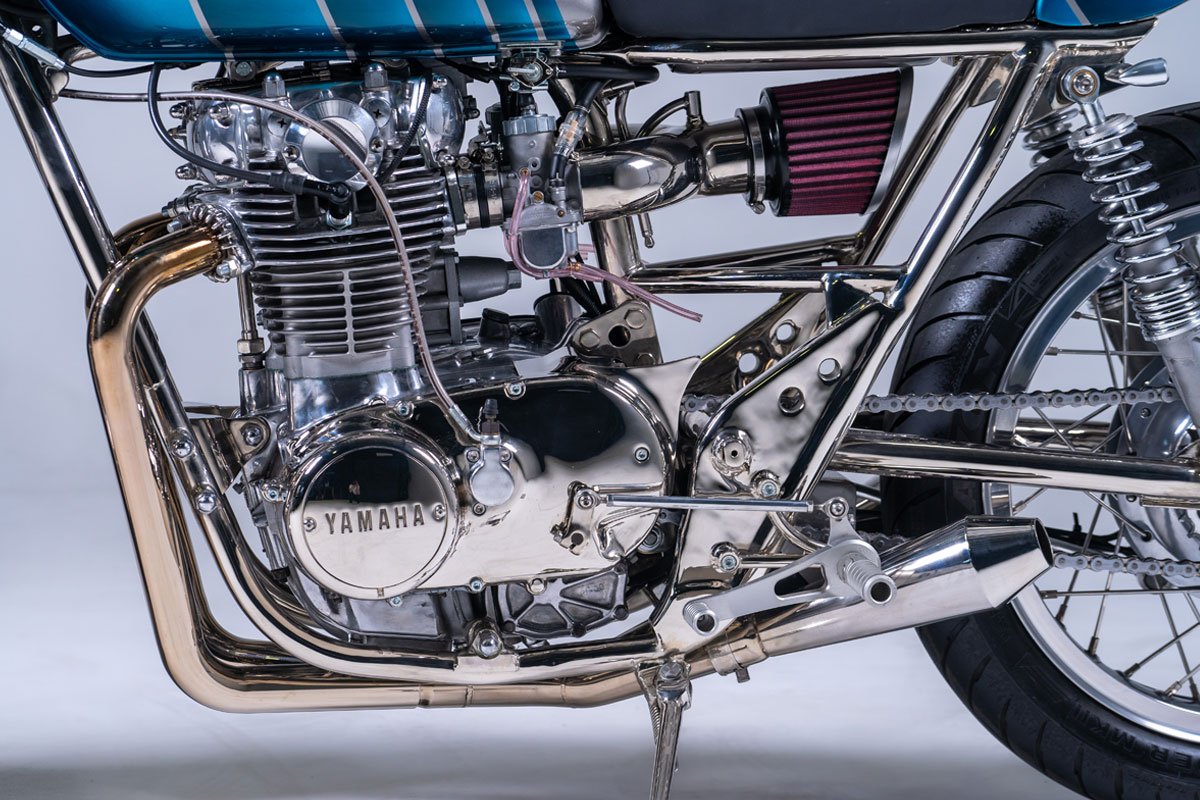 The Traditional Café Racer tail was given a twist, I wanted to avoid making a tail hoop. So the frame was internally braced, and some hidden mounts added to create a light and sharp tail section. The other custom body work is the bikini fairing mounted on the front. Another favourite part of this build.

The Fairing houses a custom mounted PBM 4.5” Headlight, with 3 x running lights trailing off underneath. Subtly finished with the PBM Delta ghosted into the paint. 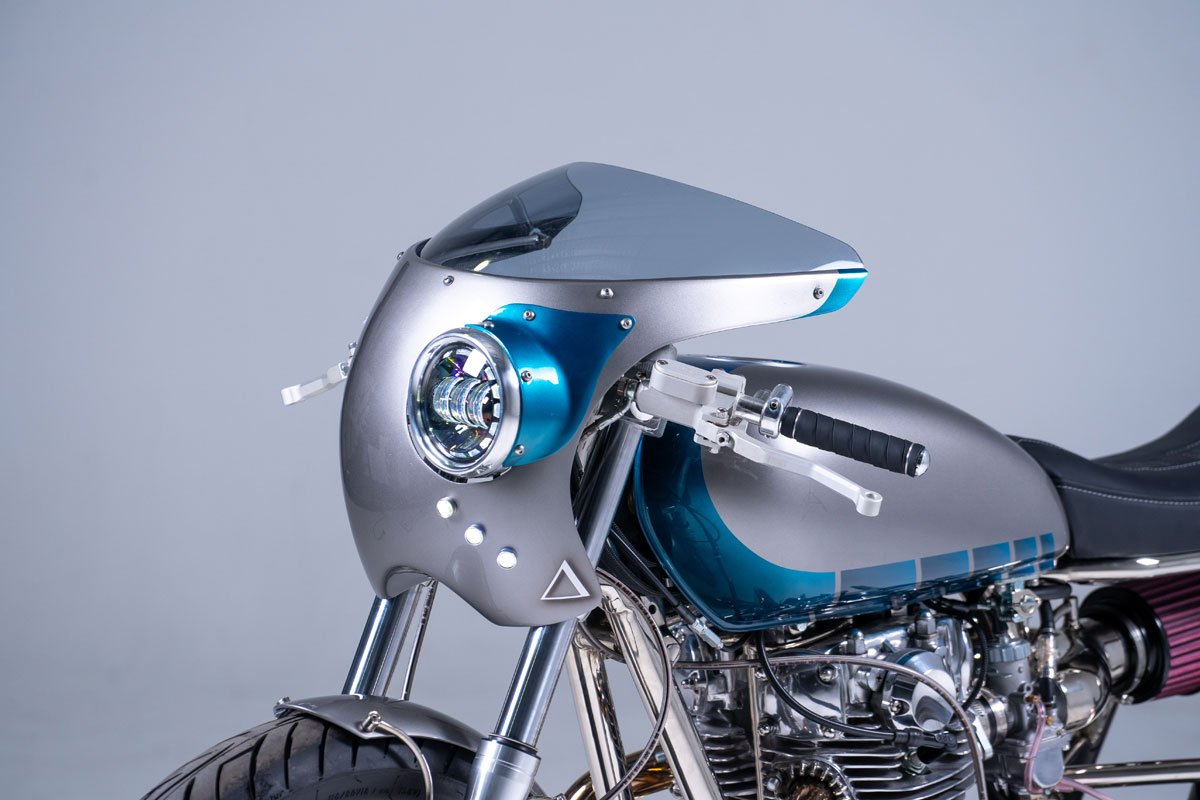 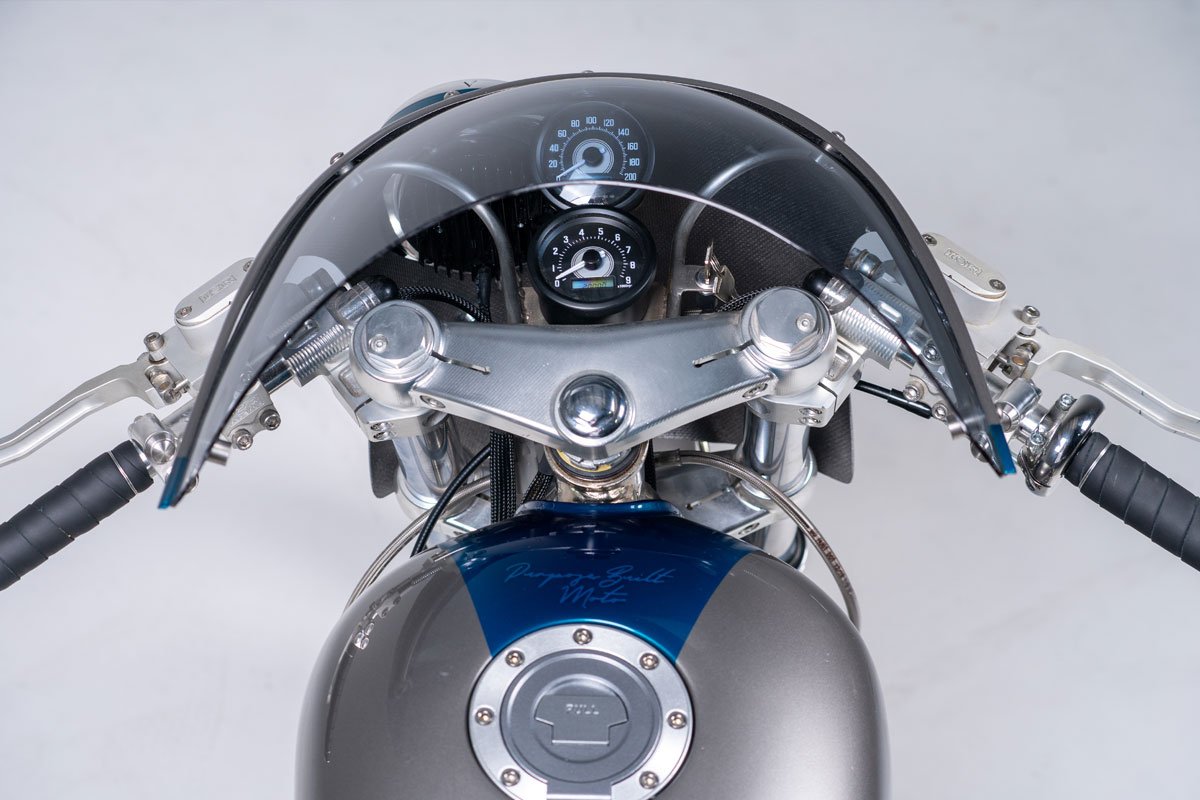 With the amount of work put into the form and bare metal finishes on the bike, the paint for the XS650 Signature Series build wasn’t going to make the project, but more compliment the work we had done elsewhere. I worked with Nathan from Livin’ Loco. Known for his super intricate detailing and wild custom paint on a lot of show vehicles. This job required more restraint so we went into the booth as he custom mixed some greys and silvers and worked on a custom mixed teal blue for a variation on the traditional speed block design. 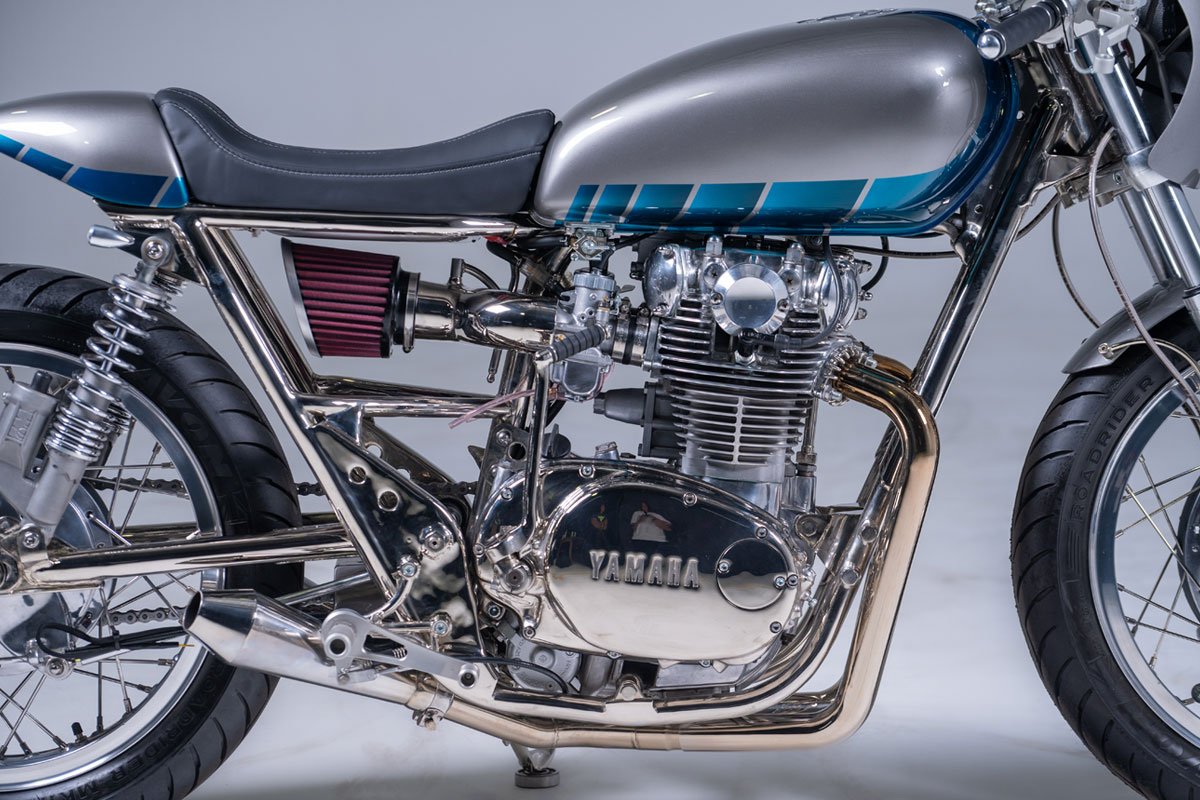 With a few select candy teal details including the Purpose Built Moto Signature ghosted on the tank the mix of polished metal and greys adds more class on top of the build. The paint finish holds a lot of depth and with the simple design doesn’t distract too much from the numerous other details that might catch your eye.

The ride on this bike is exactly as you’d expect from a well refined vintage twin. The torquey power delivery right through the rev range means its fun anywhere. The thumping of the engine through the 2-1 exhaust is just something you don’t hear on modern bikes.  The suspension is forgiving on rougher roads but gives the rider confidence in pointing it anywhere as you rip back on the throttle. In tight corners the Hydraulic front drum is a surprisingly well perfroming piece of gear. All of this and then you tuck in behind the windscreen and point it down an open straight. The visceral rattle and vibration from the 1973 Yamaha almost makes you feel like you’re riding in black and white.

This XS650 Café Racer really stirred something up inside me during the build process. I feel like we’ve walked new ground as a custom shop here and I’m really keen to explore this side of things more. Building something almost 50 years old and having it stop people in their tracks when they see it. The painful amount of detail in this build allows anyone with a heartbeat to appreciate the craft embedded on the Signature Series XS650 Café Racer.