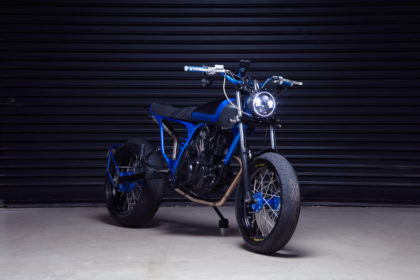 Yes, a TW200 tracker. To be blunt, I wasn’t excited at all when this bike first rolled in the garage. Having been previously built in the Deus beach runner style with the long swingarm and tiny aluminium tank it was less than appealing. There’s a million of these bikes running around and I never fully understood why. That said, the guy who owned the bike seemed like a legend, and I like working with good people. So I said I’d take it on. 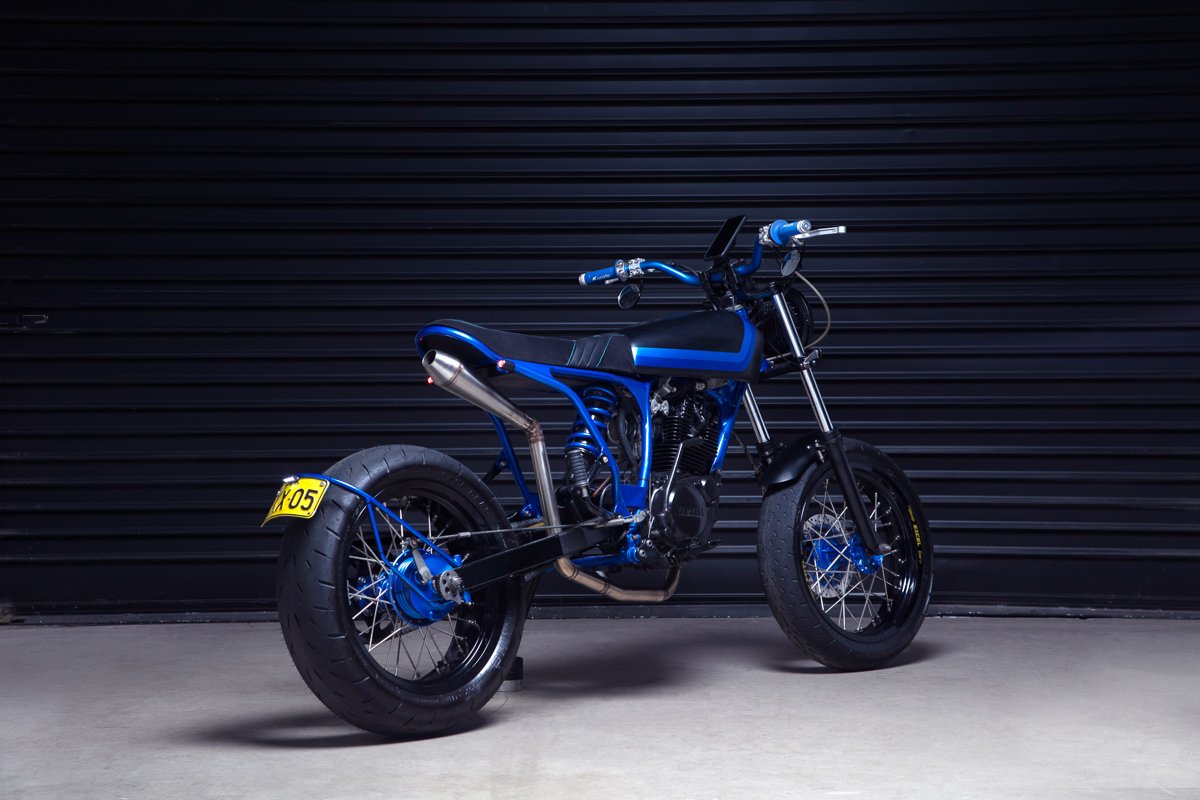 “I want an Urban Assault vehicle” was what he said. I loosely translated that to “street Tracker in my mind. “Can I get rid of that stupid tiny tank” was my reply…. He answered yes, thankfully, so I started to form an idea of how this bike was going to look.

The first step was getting rid of the seat and building a new seat section that hugged the frame. With that sorted along with the rear frame tidied up, I mounted a better fitting and larger tank onto the little Yamaha. Finishing it off with a welded-in pop up cap. That was my first step into bringing the Street Tracker to life. 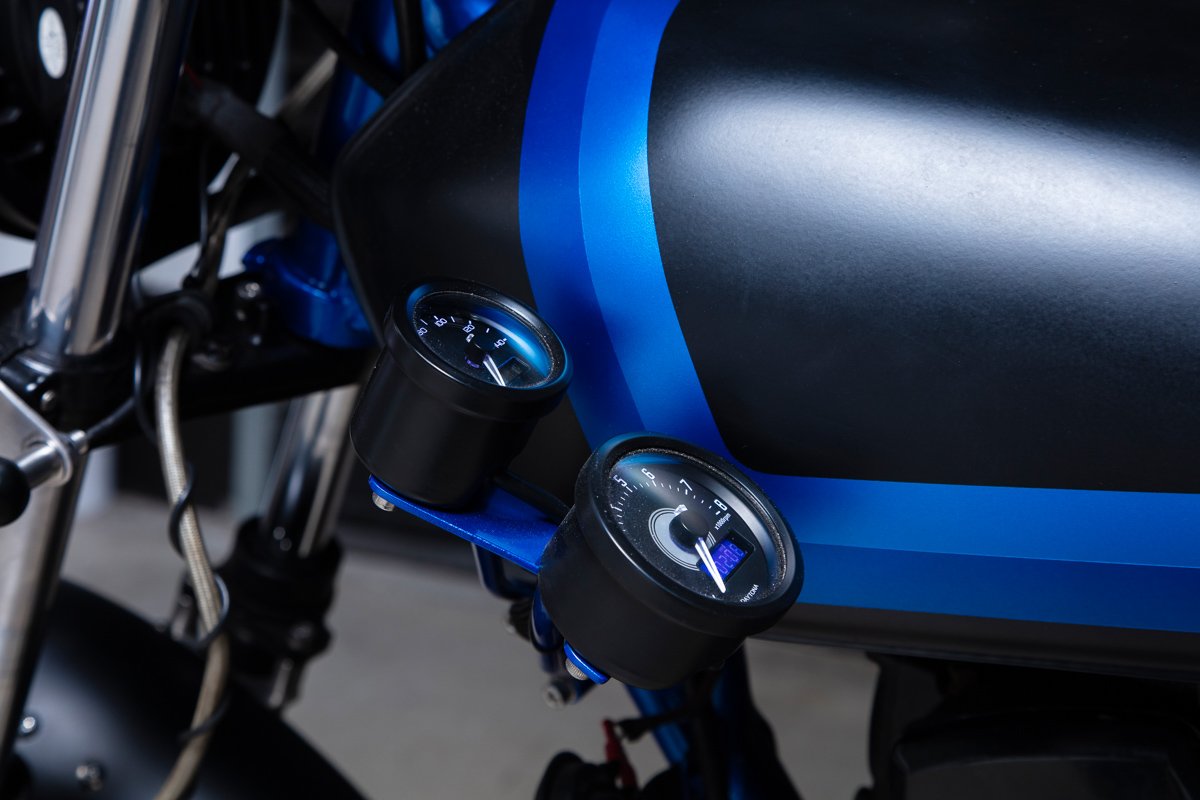 Shane had taken the bike to Dynomite moto for a host of engine mods to try and milk a bit more juice out of it. The oversize carb was now jamming on the rear shock. To fix the issue, I removed the shock, rebuilt it and fabricated new mounts on the frame. Moving it rearward to allow more room for the FCR carb that had been bolted on.

The silhouette of the bike was starting to make sense, even with that ridiculously long swingarm. The TW still wanted something more, it sort of looked like a half-assed farm bike with street tyres and it took me a little while to figure out why. While I was working on the Ducati GT1000 project I looked across and it hit me. Those fucking wheels….

The Yamaha TW200 runs a 19” upfront and a 15” in the rear and that was the problem. As well as hugely limiting your tyre selection the wheels took away all its street appeal. It needed a change.
My solution was to run a set of Motard size rims. 17” x 3.00 on the front and 17” x 5.00 excel rims on the rear and fit them up with a set of Shinko Hook-up Drag tyres. 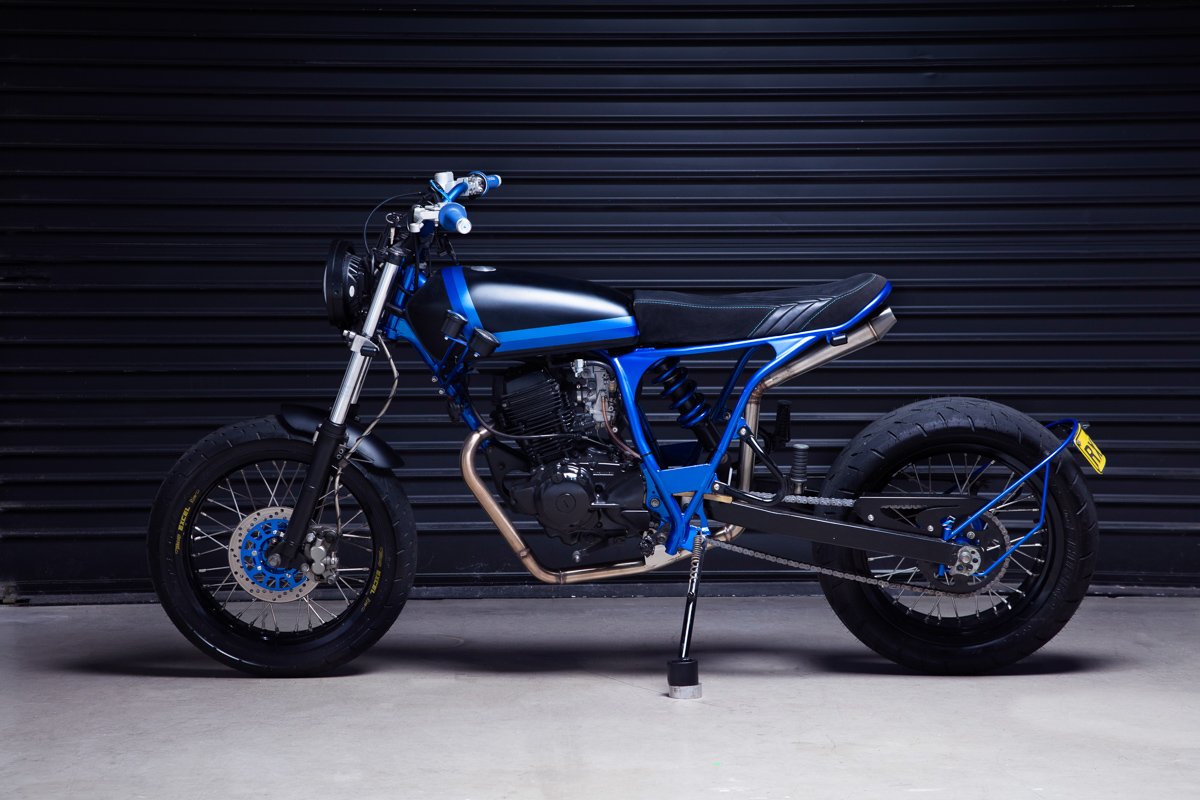 This dropped the front end a touch too which works wonders on the stance of the Yamaha on the road.

My last big fabrication job on the TW200 Street Tracker was the custom exhaust. With the extended swingarm, we were left with almost enough room to fit a second engine in there. But instead, we opted to route the exhaust central rising up the rear and fitted a 38mm/1.5” Torpedo muffler under the seat at the back. Filling a bit of room and adding to the “why the hell not” design characteristics of the TW. To finish the tail end we used our minimal all in one Brake/Tail/turn lights, with a swing arm mounted plate holder. All of the electrics are run by a PBM Black box module hidden neatly under the seat. 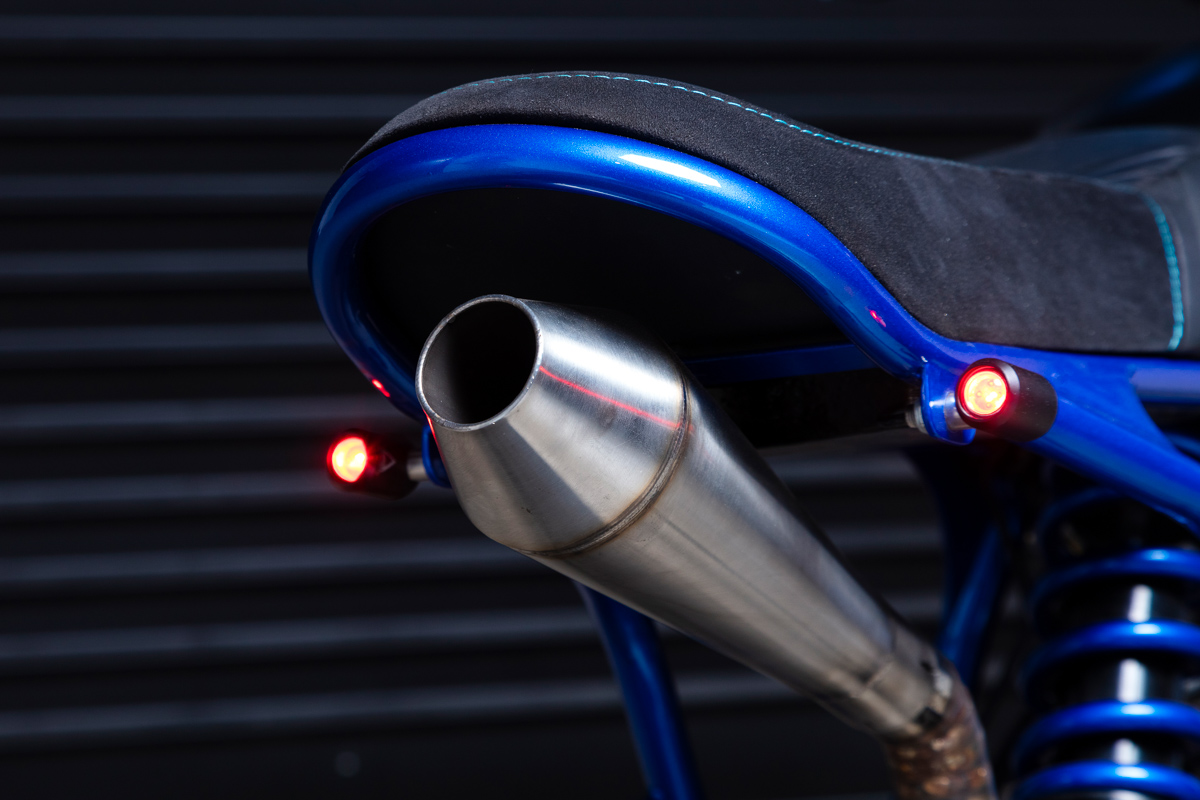 The bike was shaped up, now time to finish dressing it with all the trick touches. We fitted a set of high rise Renthal handlebars in an anodised blue, this matched in with the electric blue colour scheme of the frame and tank. PBM 3 button switches, Ariete blue grips and ISR levers dress the handlebars. Rounding out the front end is a 7” flashpoint headlight, and a set of black dome LED indicators. Utilising the aluminium front fender and some fabrication slugs the stock fender mounts were used and the fender lowered onto the new 17” front wheel. 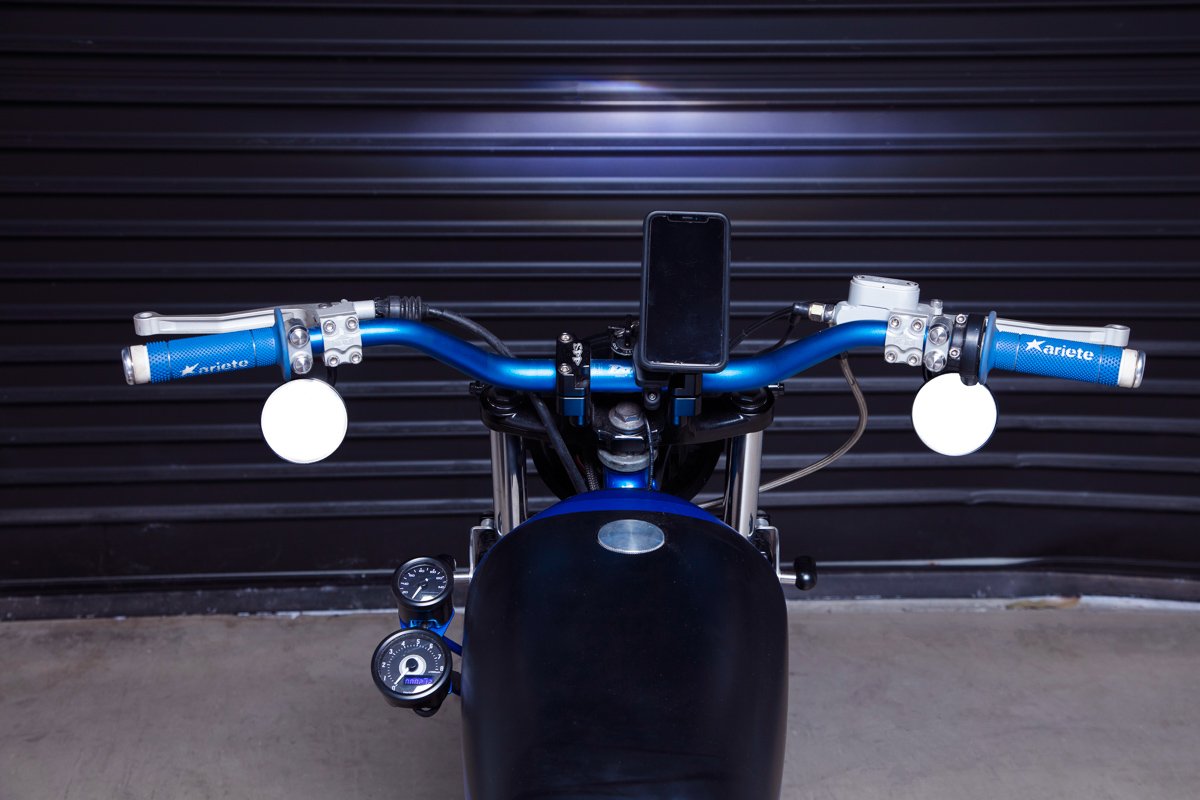 My favourite modification of all on this bike is the side-mounted gauges, they’re odd-sized, ridiculous and totally impractical. that’s a list of reasons why I like it by the way. Using a 48mm and 60mm Daytona Velona gauge. Such a simple thing but every time I look at it I smile. 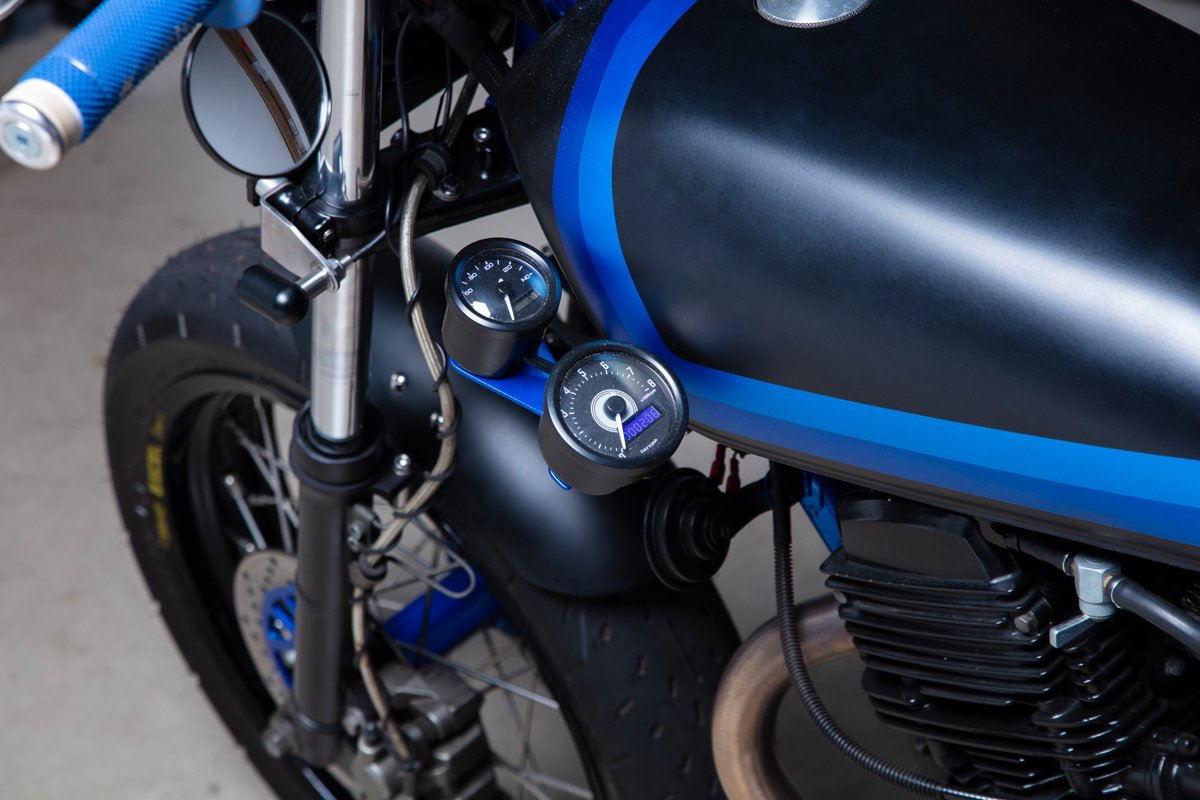 Shane had a lot of different ideas when it came to the colour scheme of this bike, not all of them conducive to the street reaper vibe I was hunting for. The underlying theme though was a retro throwback, so with that in mind and keeping with the Tron style black/blue idea, I went to Popbang Classics with a huge box of parts for paint.
The frame, brackets, hubs and front disc were to be an electric blue, with the tank getting a retro stripe design in satin black and faded blue’s to top it all off.

To finish off the weird and wonderful TW200 Street Tracker vibe, we had Timeless Autotrim trim the seat out in an A-symmetrical stitch pattern of black leather and Alcantara with blue stitching. Jamason hates a-symmetry, but after some pleading and a little tantrum I got my way and he ended up liking the result too. a minor bonus. 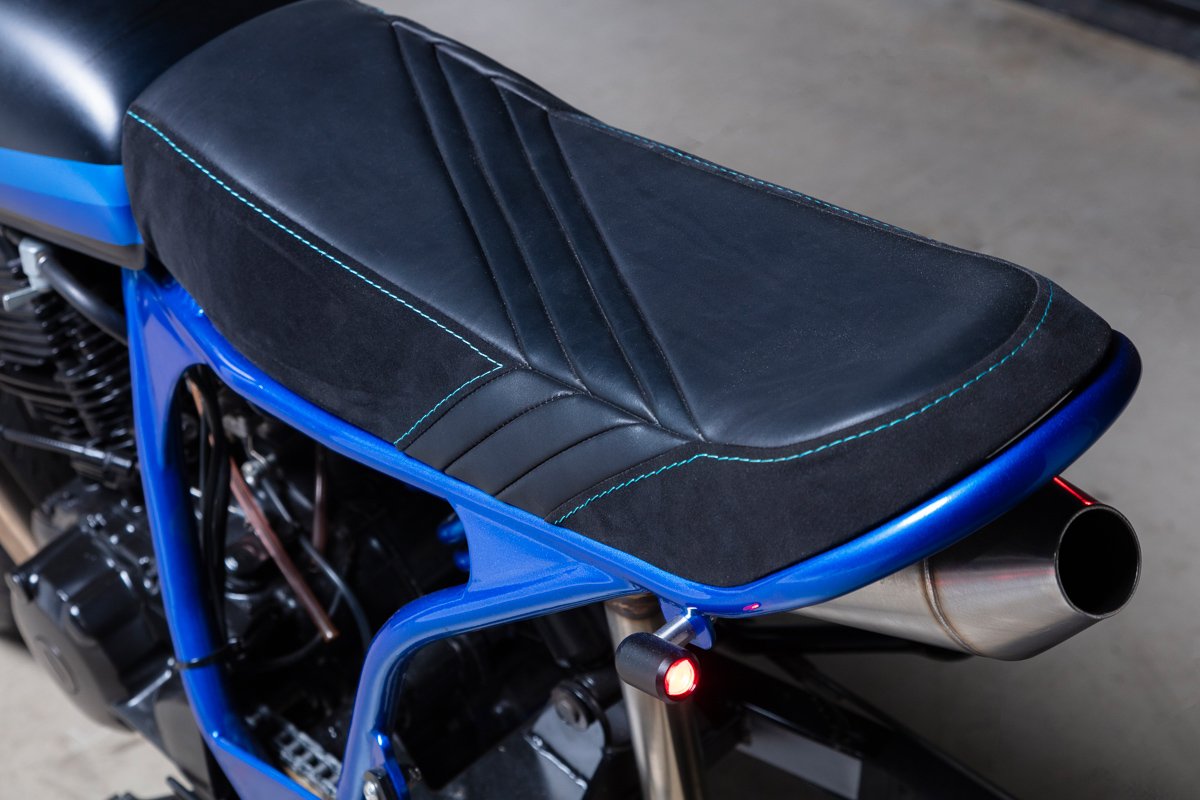 The TW200 Tracker is never going to be an absolute performance machine. But for what it is this bike delivers so much fun ripping through any suburban streets. Making any ride, at any speed a ride to look forward to. The long wheel-base and big fat tyres add an undeniable feeling of novelty to this Urban assault weapon.

Most bikes you need to take on a long ride down a nice road to be enjoyed, this TW200 however, can make any destination sure to put a huge smile on your face. Mission completed, on to the next! 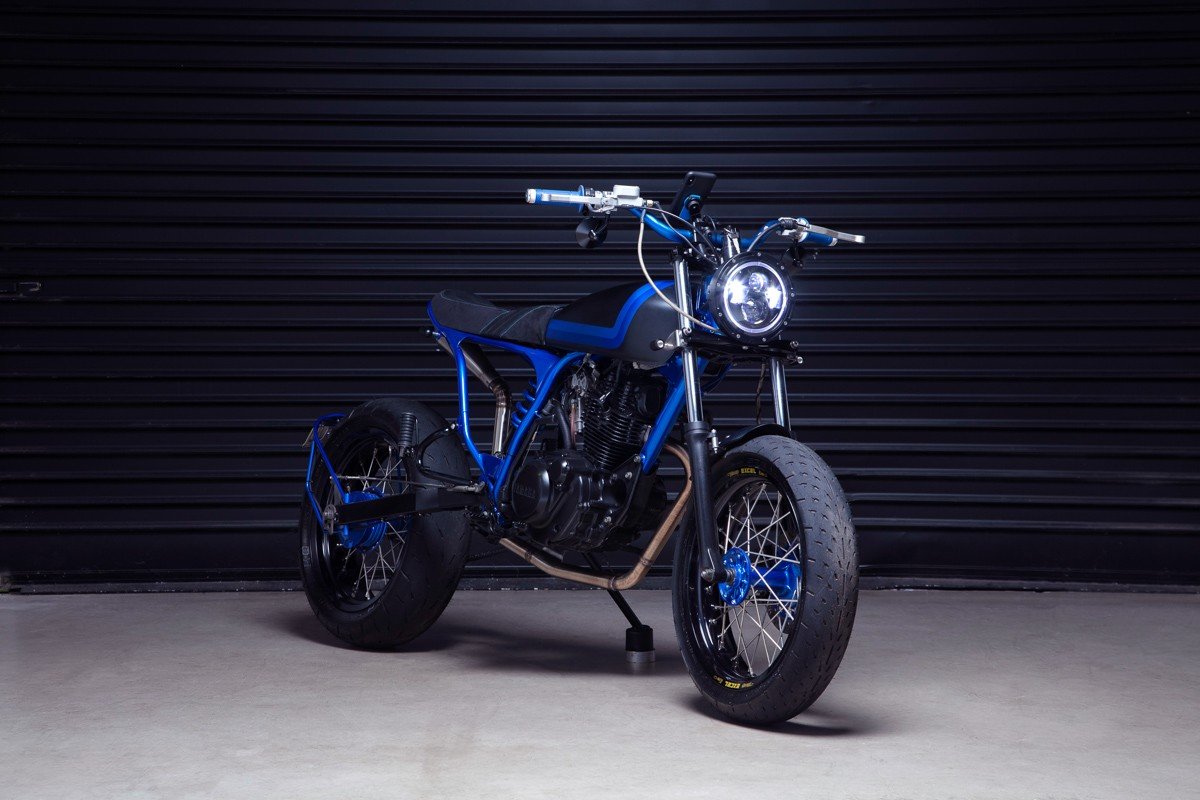