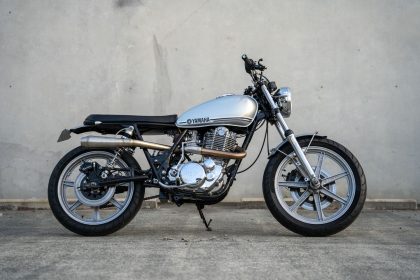 We took on an heirloom Yamaha SR500 Scrambler to give it a timeless rebuild.

Looking at this SR500 Scrambler project build, it’s easy to sum it up in a few words. 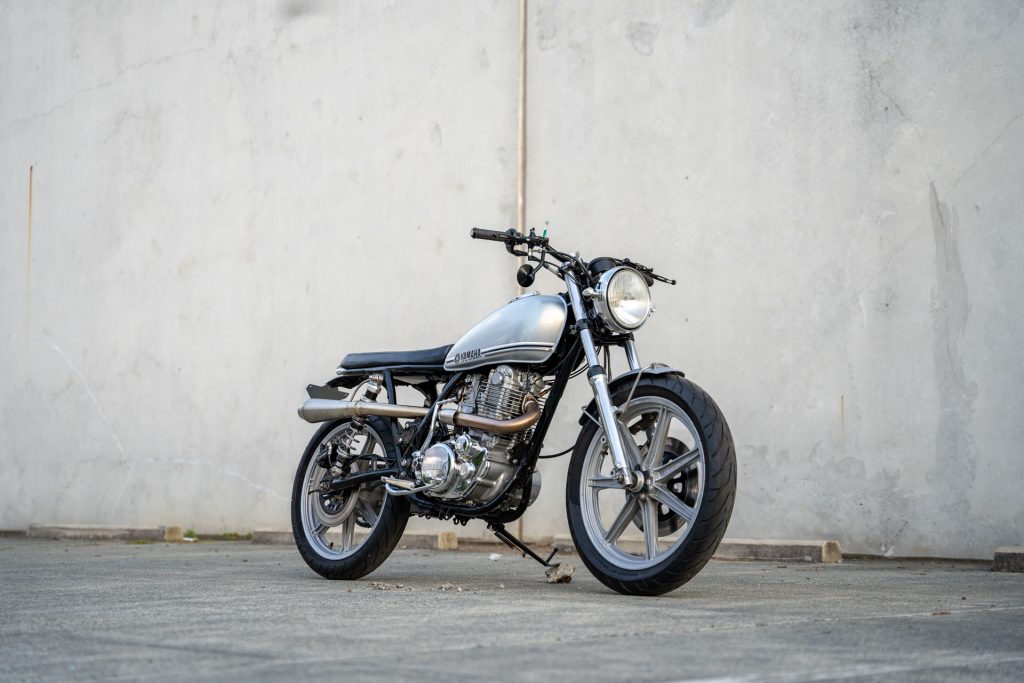 The bike’s owners, Mark and Jon (father and son) and I had been discussing the bike for a few months  during a period where we were booked solid and couldn’t take any more work. Once we had time to meet in person and get started the guys let me know a bit about the bike.

The SR500 Scrambler had been purchased near new in 1983 by the Mitchell family and had been ridden and passed down until one day it stopped and didn’t get going again. With 80,000 kms on the clock and a few battle scars, the bike was beaten up, but not defeated. The Yamaha was to be rebuilt with a lean outlook, taking the scrambler riding style, and applying it to a street bike. For our client that meant, street tyres, high and wide bars, forgiving suspension and a nice upright ride.

There was still plenty of life in there, we just had to coax it out of this tired old Yamaha. We started with the engine. PBM has recently expanded into building our own motors in house, so we pulled the motor for some testing to see what we were looking at. To our surprise for the amount of KMs on the engine it looked great inside. Obviously well maintained and not ridden too hard, but a 40 year old bearing, is a 40 year old bearing. So we went ahead and refreshed the whole thing inside and out. 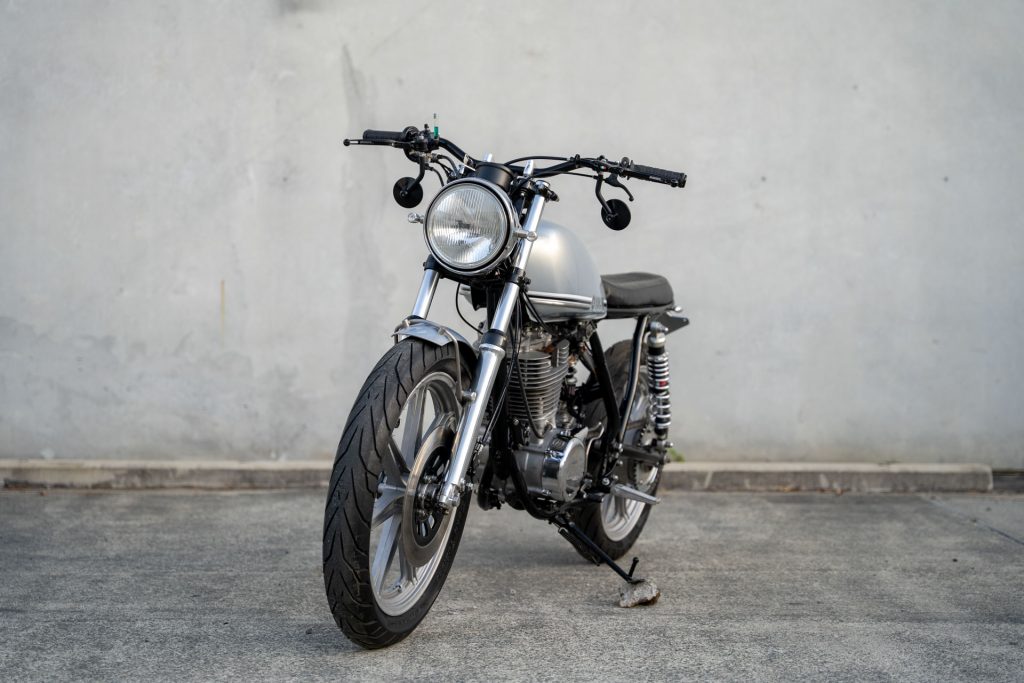 Alongside the SR500 Scrambler’s complete rebuild it’s now kitted with a high compression piston, performance valve springs and clutch, a new Mikuni Flatslide pumper upgraded coil and ported head. You’ll see what I’m talking about in the test ride video, but this thing has to be the best performing SR I’ve ever ridden. I’ve been on SR’s or XT’s with a little more top end power, but this bike does everything well. Usually I don’t enjoy these bikes quite as much as I enjoyed riding this one – which is a testament to the great work done by our inhouse mechanic Jesse.

While the engine was out being spruced up and hydro-blasted, we stripped the mag wheels down and started the fabrication. The Mag wheels are one part of the bike Mark didn’t want changed, usually I love my spoke wheels on classic bikes, but PBM prides itself on versatility and customer experience so we worked with Mark here to set out a plan.

The bike would be very monochrome and rely on a lot of raw metal finishes, adding to that would be the Impeccably finished wheels. The mags were stripped, and hydro-blasted to a smooth finish, with the outer lip sanded to a fine finish before being clear coated. This leaves the mag wheels with a steely blue finish, and won’t have the aluminium oxidizing as its living its best life in the Gold Coast’s salty atmosphere. The finished wheels are wrapped in a Pirelli Angel GT tyre, a great sport option for when you have those skinny classic tyre sizes. 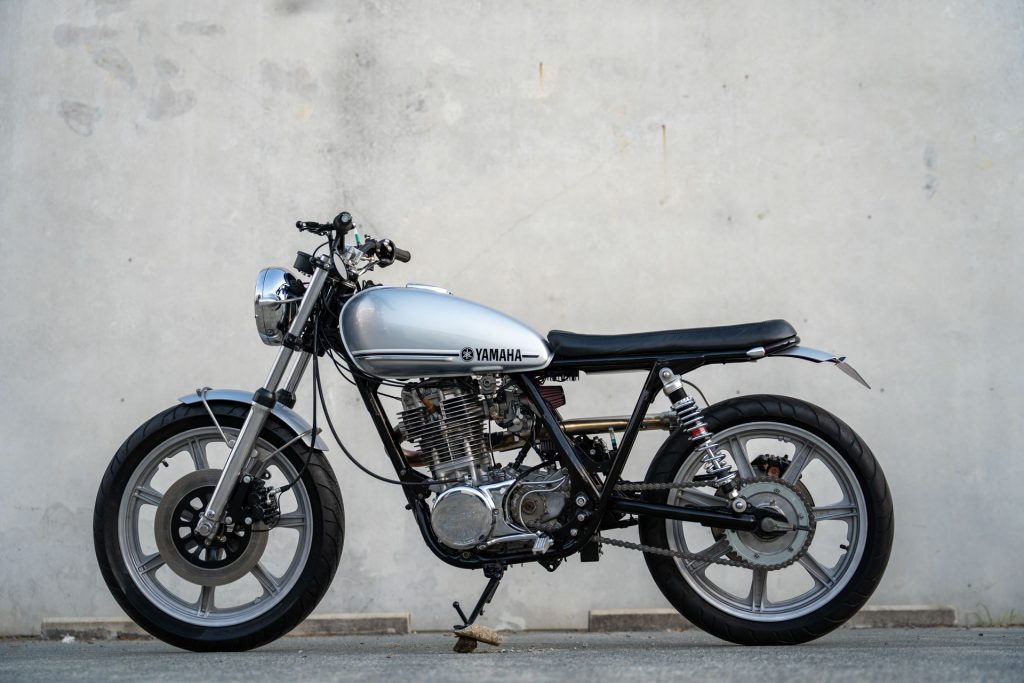 Dylan got busy in the fab lab cleaning the frame down and hooping the tail to allow for our new Brat style seat to be built. Hiding the battery under the swing arm, and the Black Box v3 module under the seat allowed a lot of room where the old side covers were removed. Giving the bike a much lighter look through the middle. The tail has been kitted out with our aluminium rear fender kit, tail tidy and had the tail lights frenched into the frame for that ultra crispy finish.

We’ve rebuilt the front suspension, and slightly stiffened it up. It’s still a very plush ride, we’ve just taken away some of the doughy characteristics these SR’s were born with. The rear suspension has been lifted slightly with some custom YSS shocks with chrome springs.

Once the freshly rebuilt engine was back in the frame we started the exhaust. Originally we were working on a low-slung header and muffler and with the bike taking shape as it was, I didn’t really like that idea, here’s why. Single cylinders can be very hard to make sound nice. From experience, putting a short header on these bikes with a performance muffler that finished under the engine cradle sounds horrible. It looks good in photos, but in practice it’s not what I wanted for this bike. 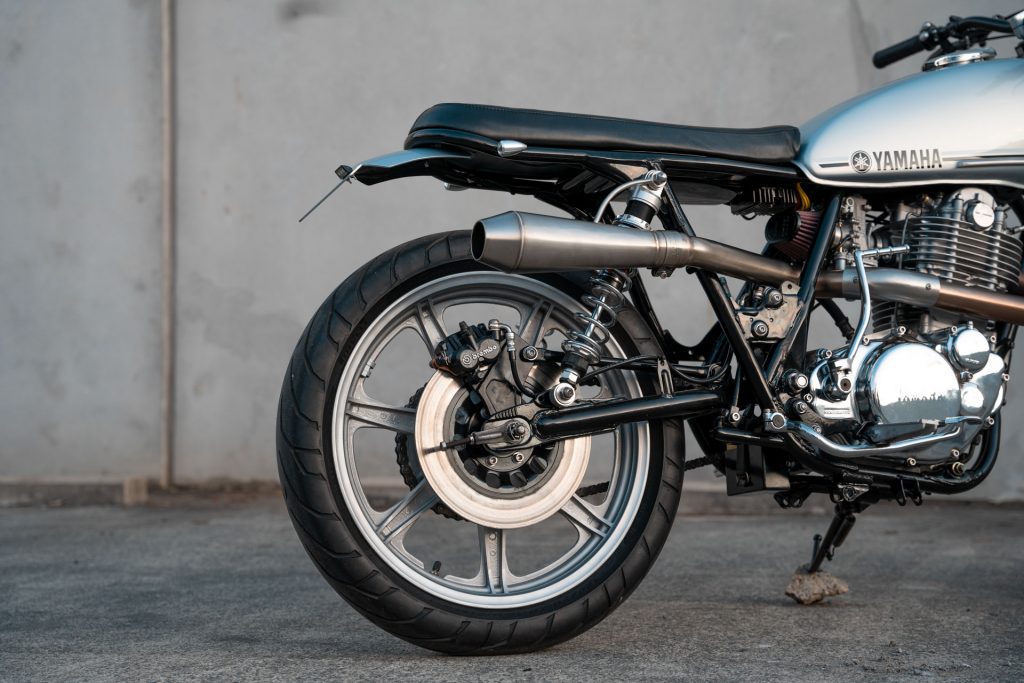 The high sided header, allowed us to elongate the exhaust and would provide a better note. Hollowing out the triangle on the frame worked for us here as well, with the header passing inside the frame to make room for the rider’s leg. We’ve fabricated an extra heat shield for a bit more comfort on those summer arvo rides. On start up, I was stoked with the sound we’ve achieved here, the SR500 Scrambler thumps with a deep note, but hasn’t got that ear piercing crackle so many single cylinder customs have. Job done!

Up front, we’ve fitted a set of Biltwell bars, kitted out with our mini push button switches, Accosato levers, a Domino XM2 throttle and some cushy street grips. The new bar mounts have been refreshed with new rubber bushings so this old girl wont shake your fingers numb! The gauge on the SR500 street scrambler is a Daytona Velona combo gauge, a single face with dual dials for tacho and speedo. You’ll see these on a few upcoming builds for soon as well!

We’ve retained the standard headlight and replaced the internal glass as well as having to hand beat and repair some damage to the bezel and headlight bucket. This and a few other select parts were sent out for chrome before we got busy wiring the bike up and heading for a few test rides. 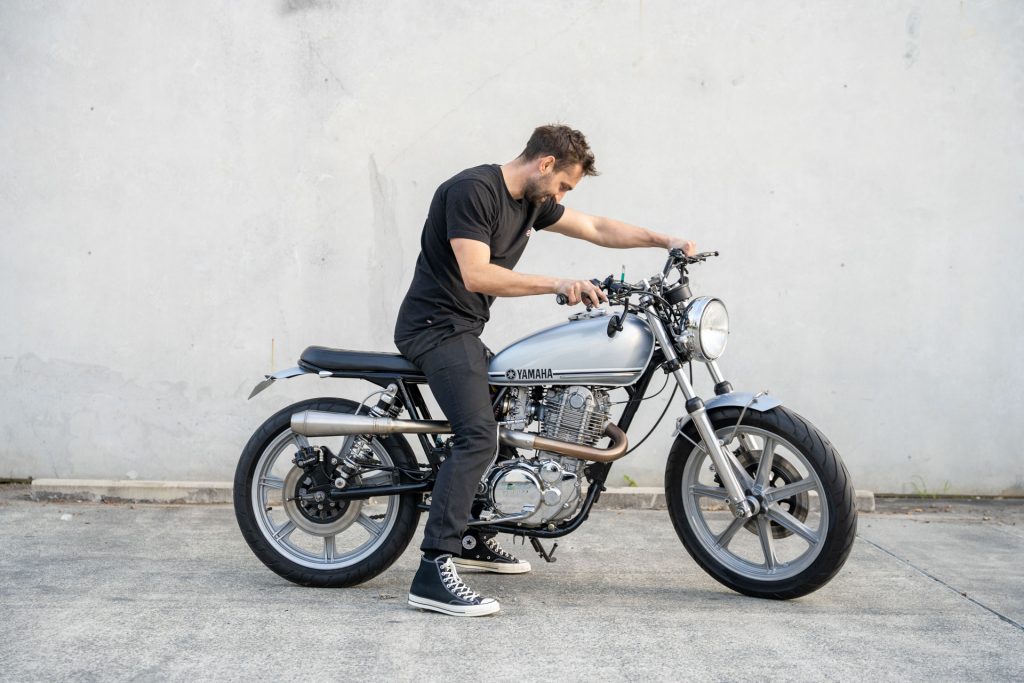 I’ve been teaching Dylan the ropes of wiring a bike and this one was his first at having a crack at the entire system. With our Black Box making it nice and simple for him to manage and keep all of the wiring tidy and most importantly functioning as it should.

One final detail was added just before paint was sent out to Justin at Popbang Classics. While the paint design was kept ultimately simple, I wanted to add a little something more. It’s been a while since we’ve added some moulded tank detail but this bike called for it. A simple round bar detail has been added to the tank, some 12mm stainless rod shaped and welded in place adding some much needed depth to the otherwise simple design.

It’s easy to see why these bikes are so popular, an ultimately simple machine that’s as versatile as it is timeless. In a sea of custom SR500 Scramblers I can comfortably say that I think we’ve done this one justice and given it the care it needs to carry on for another 40 years or more in the Mitchell family.

If you want to see some more of this bike, check out the SR500 Street Scrambler Gallery 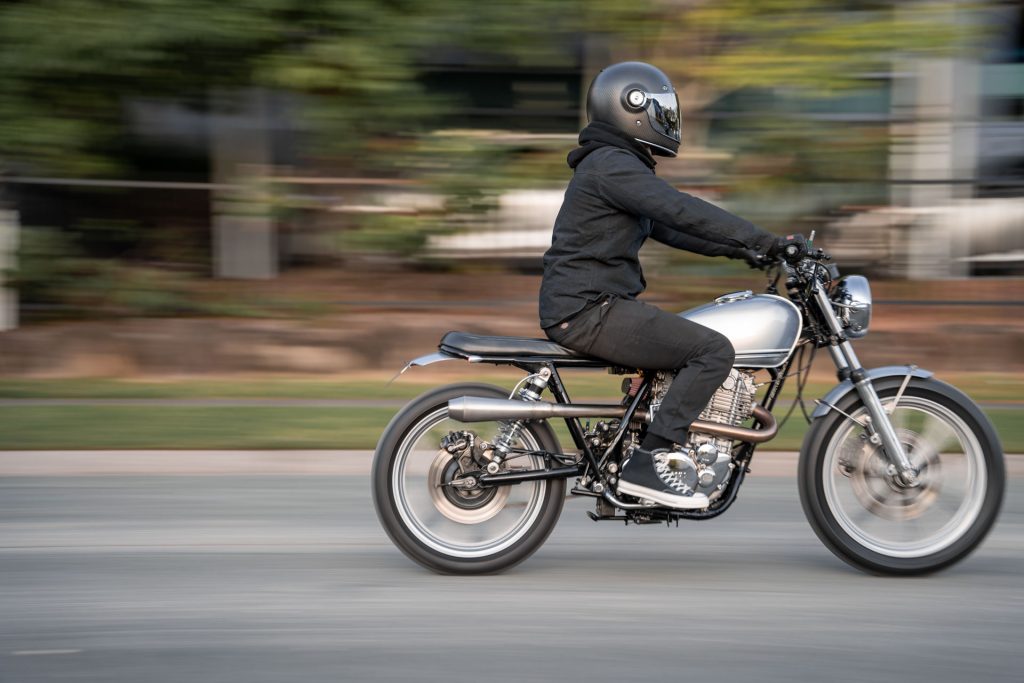