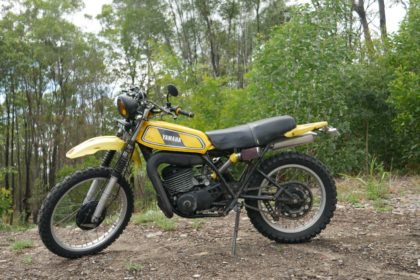 James was referred to me from another customer. He had been riding this DT400 scrambler on the family farm since he was a kid. It had been used and abused until it died then was stored and left to age in a shed out near Dalby QLD.

He one day picked it up and dragged it back to the Gold Coast, dropping it into the garage wanting it fixed up as a surf runner in place of riding his Ducati Diavel to the beach. James has the shiny bikes, the ones with electric starts and 3 riding modes at the push of a button. I wanted to show him what it was like to ride something with a personality and a bit of character. The 1978 DT400 scrambler was just the bike, a loud, smoky, rusted and worn enduro classic. 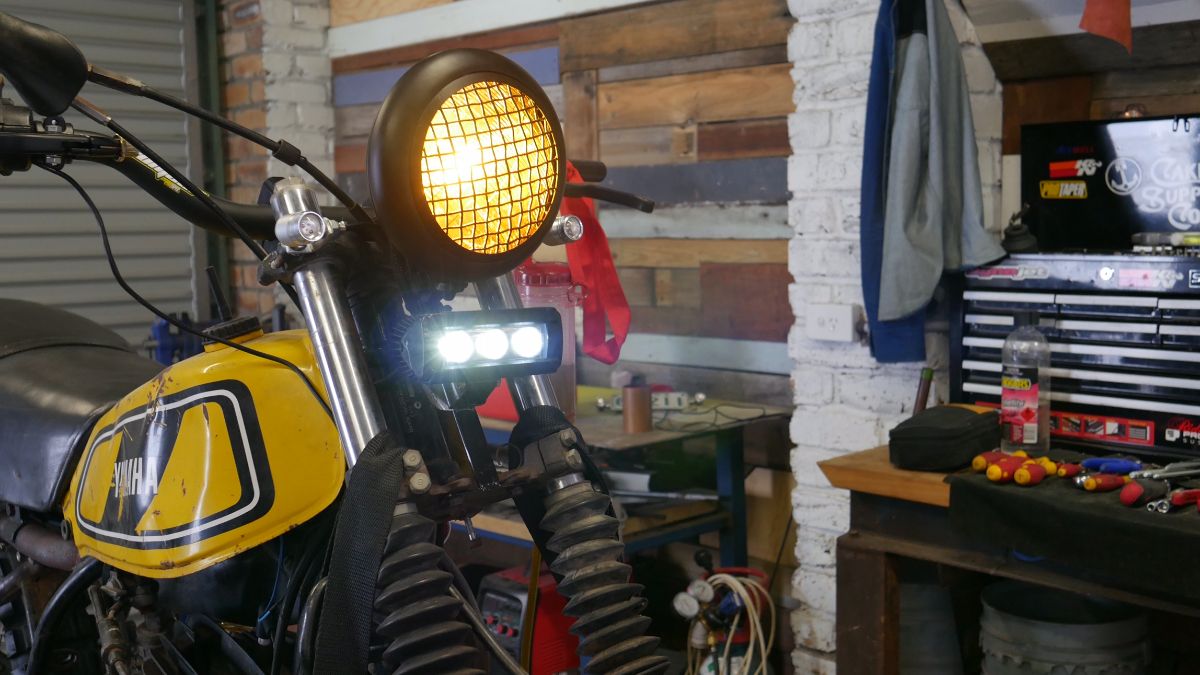 I set out to have it run and ride well but tend to look like it was about to fall apart, in its current state it wasn’t so hard. James had a few requests with the build including removing the air-box and side covers. After our talk, I set out with some points I wanted to hit with the bike.

From the outset I wanted to hand something over that had all the character a VMX bike should, with the added bad-assery of some new generation MX parts but keeping a raw, thrown together style.

As the bike came it hadn’t run in a while, it had the air-box (complete with powdered foam filter), tank and seat. The gauges were cactus, handlebars bent, none of the electrics worked and the oil pump was shot. I started with tearing anything unnecessary off the bike, the airbox and oil tank were gone, and the old lights went out the door. 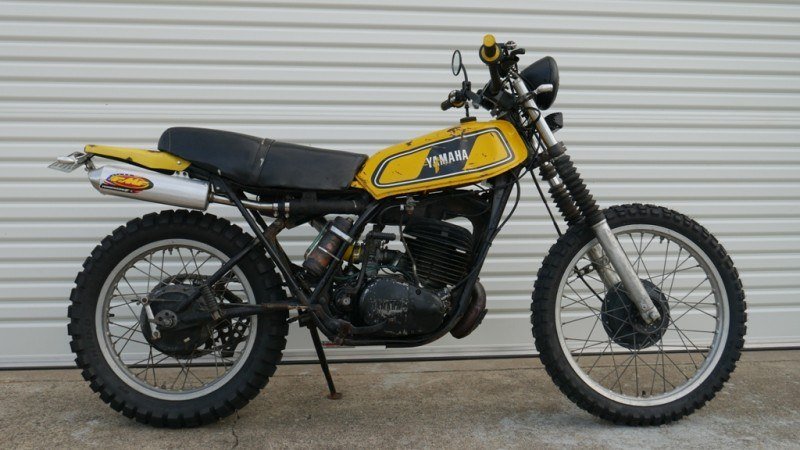 DT400’s ran on a 6V system from stock, in all honesty, you’re almost better off riding with a kerosene lamp hanging off the clutch lever. First order of business was a 12V conversion from Power dynamo in Germany. I was thoroughly impressed with the kit which comes with everything you need for the install (minus a TDC gauge) and will run the bike without a battery when it’s complete. Next was mounting the new dual headlights, making the electrics tray and fibre glassing the MX inspired rear guard with flush mount custom dynamics tail light. The new guard was finished in Yellow with some rust added to suit the tank.

Next was the new Pro-taper contour handlebars and RHK risers. The DT had a strange raked back top triple clamp. With the added height of the RHK risers it sat too far over the tank, I shaved the triple clamp and risers to have them sit a lot further down which gave a good riding position. The bars were finished off with some Pro Grip grips, Purpose Built Moto Slim push buttons and a miniature speedo. I had a delivery rock up from Shinko Tyres with a set of their E805 Big Block Tyres for the DT. 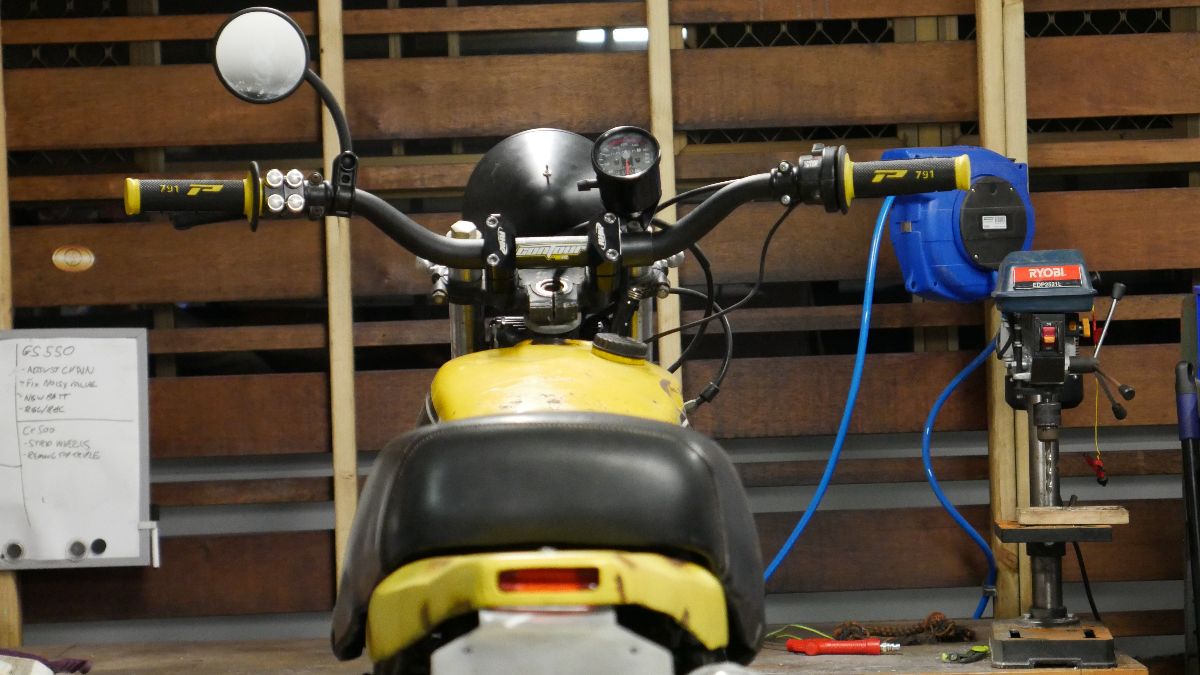 You may have seen the oil tank Locky made for his Yamaha R5, I liked it so much I asked him for another on the DT Build, He came through in epic fashion with a burnt and battered copper 2 stroke oil tank emblazoned with the bikes new name “Gnar Lord”. During the build the DT went through a couple Nicknames, the first Being “Dirt Turtle” Which stemmed from my childhood growing up riding Motocross bikes and making fun of my one mate who poked around with us on his DT100, earning the name Dirt Turtle for him and the bike. The next came from a conversation I had with Locky one arvo. It wasn’t until I dug James up on Instagram to tag him in a progress shot of his bike, I saw an Instagram feed full of epic surf photography in exotic destinations, Jimmy was a shredder.

I slung Locky a txt that read something like

“Hows Jimmy on Instagram? Never realized he was a Gnar lord, green roomer…” (disclaimer- I’m not a surfer)

Locky thought it was hilarious and so the name stuck, James didn’t know until he picked up the bike either….. 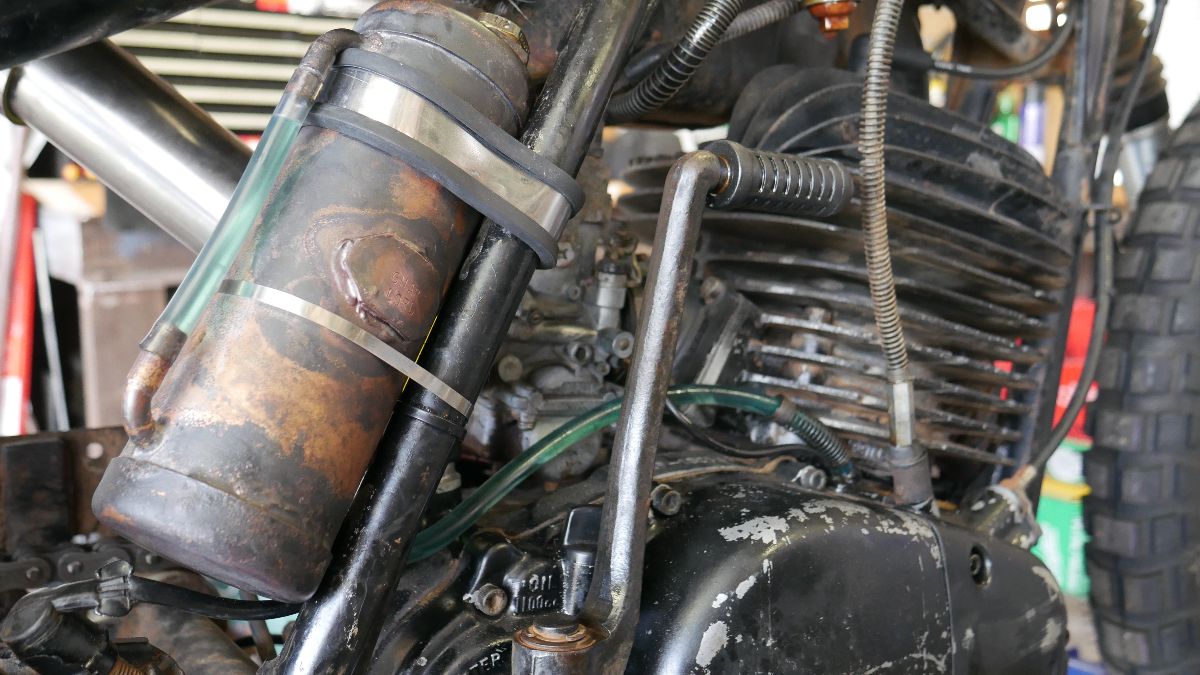 The last pieces of the puzzle were the exhaust and new intake. After a little digging I found some info on the standard mufflers. Being unable to remove or replace the baffles they tend to get clogged up over time and choke the bike, I took this as an invitation to upgrade the muffler. I found an FMF Powercore 2 to suit a KTM 300EXC modified the pipe, and slighty re-routed the expansion chamber to run the muffler inside the frame instead of being a leg toaster on the outside. 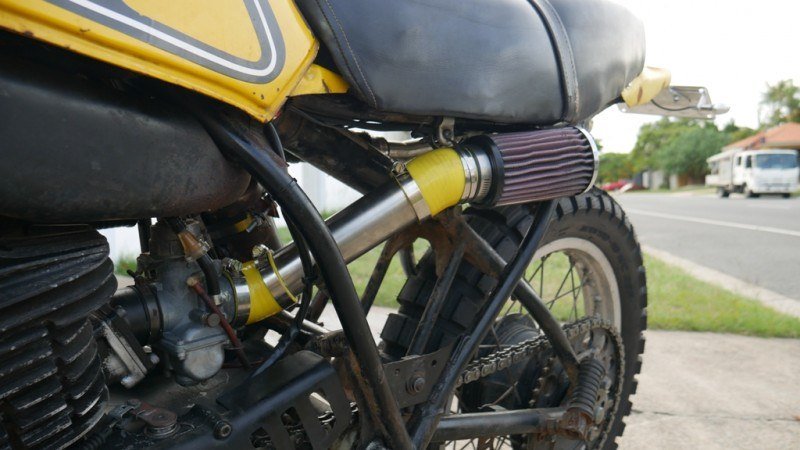 This DT400 scrambler was being built to be capable on and off road, and after removing the air-box I found the carb to be pretty low set and in direct line of any dirt/mud thrown off the rear wheel. Some intercooler rubbers were sourced along with stainless pipe, and built into a snorkel of sorts. Piping the K&N flat track filter up away from the line of the rear wheel, it turned out to be my favourite feature of the build and definitely something a little different.

The 1978 DT400 scrambler has been registered for the first time in its life! It’s now screaming around the Gold Coast and will hopefully be back in the garage for a few more touches and a surfboard rack before too long.

If you’re thinking about diving into your own scrambler build check out our “how to” on the ins and outs of building a Scrambler. We’ve had a few scramblers come through the Purpose Built Moto garage now so check out our Scrambler gallery if you love these bikes as much as I do.

Thanks for taking the time 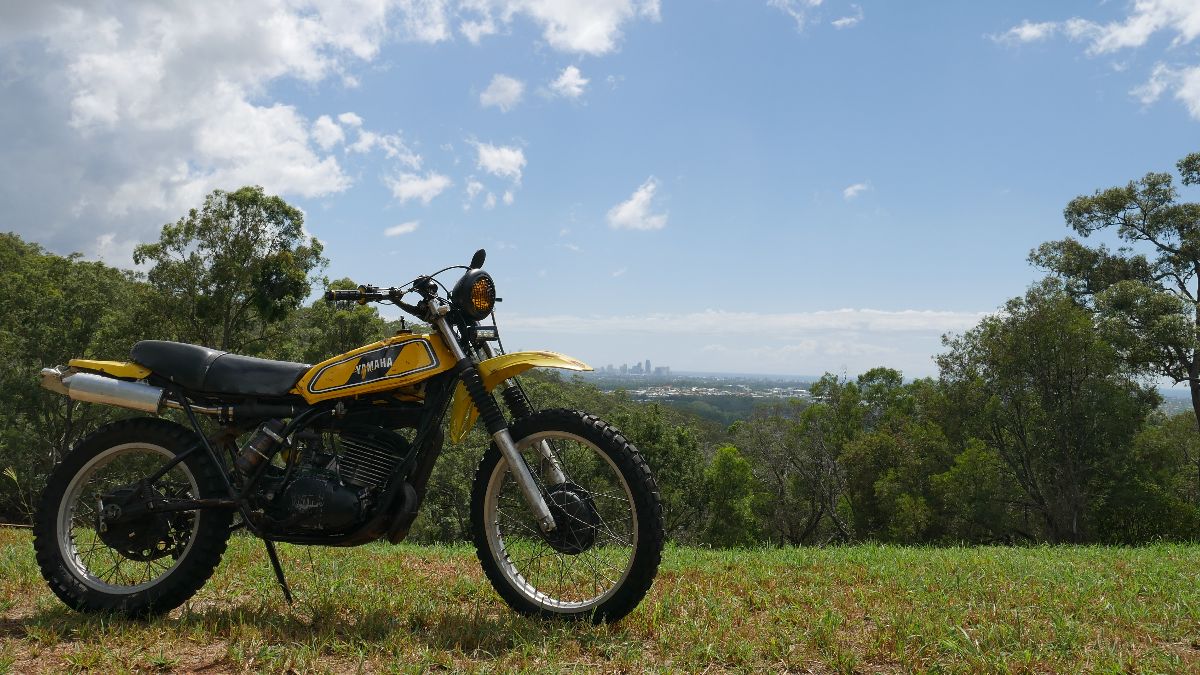