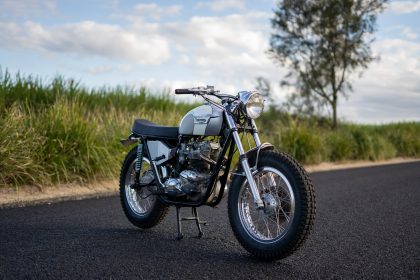 A quick note before we get into the Triumph Bonneville Desert Sled build, if you have a nice old bike, and you want to keep it that way. Make sure you use it! This Desert Sled project I’m about to run you through came to us because it had been neglected so long it was no longer running, everything had seized up and without some serious attention, it was going to slowly fade away and crumble. 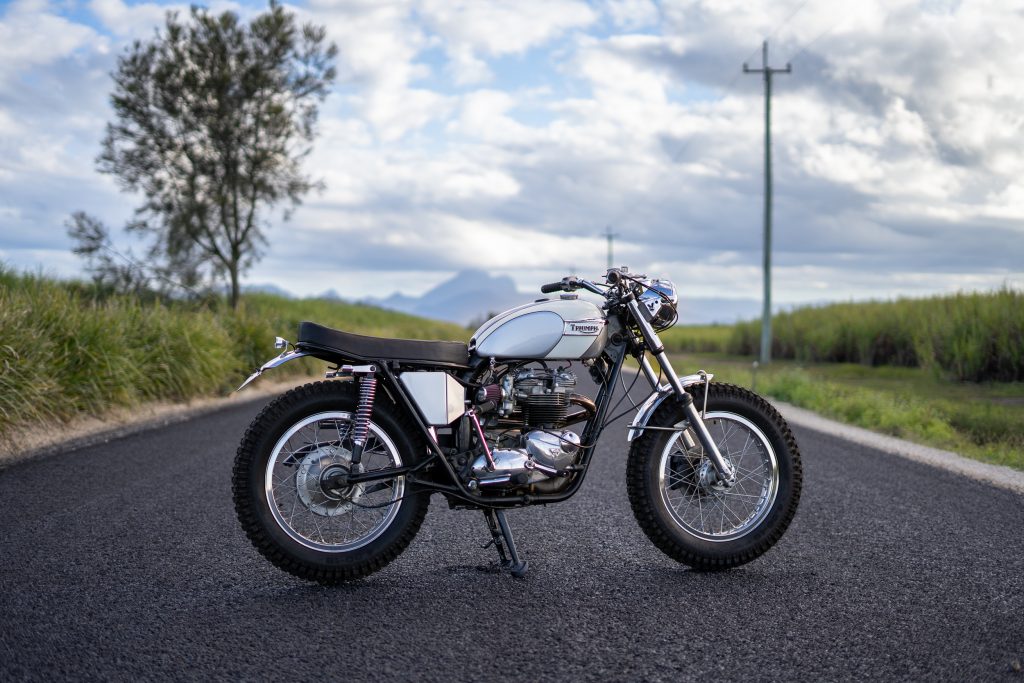 Luckily for the bike, and its rider Azad, we got our hands on it and gave it one hell of a re-birth. Purpose Built Moto hasn’t ever received the call up on a vintage triumph build, but we’ll never say no to something fresh and exciting to learn on. Azad came into the shop, we worked out a rough plan of the style he was after and we broke out the tools shortly after.

Starting with the wheels, brakes and suspension we needed to get the bike rolling properly again.
The rotors were stripped, machined, painted and the callipers had a similar treatment. Made new from the inside out. The rear shocks have been swapped out for a new set of upgraded shocks, lifted 20mm and the front suspension was completely rebuilt after the legs were chromed and the fork lowers polished. 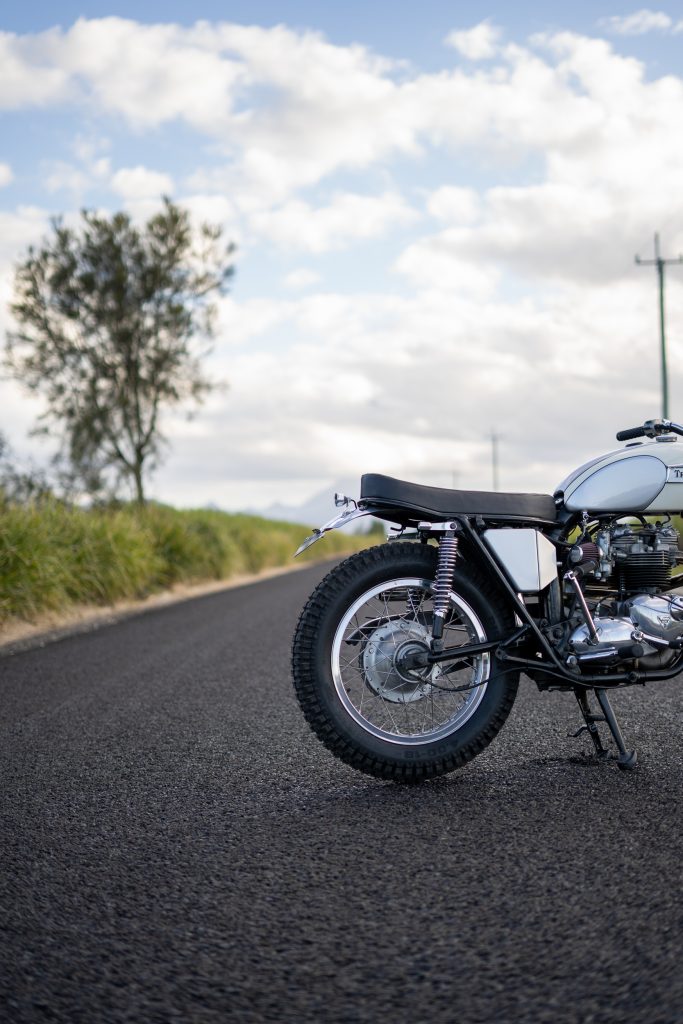 The wheels are a real standout piece  for the Triumph Bonneville Desert Sled. Running a new set of 18” ‘mud catchers’ or valanced rims as the more fancy among us know them. The aluminium rims were polished up and relaced to the original hubs that received a restoration aswell. Lately I’ve really been loving this style rim on the classically styled custom bikes we build. They add a nice touch of depth and detail over the standard pattern chrome or polished rim, as well as being a good bit stronger with the high lipped wall on them. 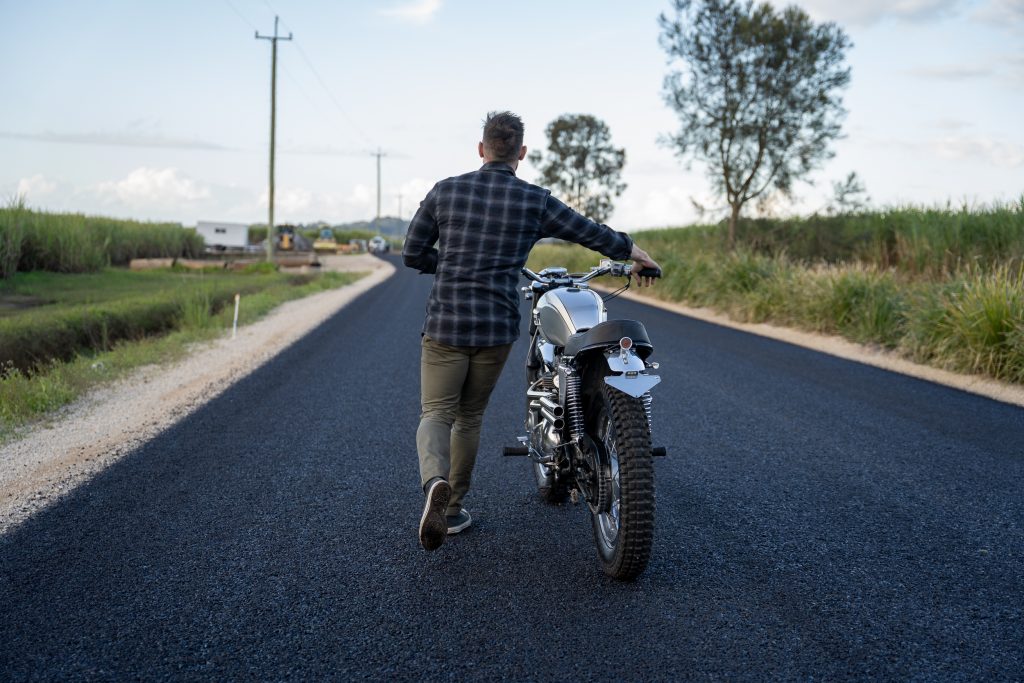 Wrapping the gleaming new rims is a set of Pirelli Trials tyres. After a bit of research these seem to be the best tyre in this style for longevity on the road, and they look killer on this bike. Couldn’t be happier with how they suit this desert sled style. Next up was the fender fabrication.

Using our brand new rear fender kit on this bike, to cleanly finish the tail of the bike, with a seamless plate mount and welded and polished back bracket for the Orbit Tail Light on the rear. Up front we’ve fabricated a looped over style fender bracket and aluminium fender. Both polished up nicely to tie in with the clean chrome work we’ve done on the front end. 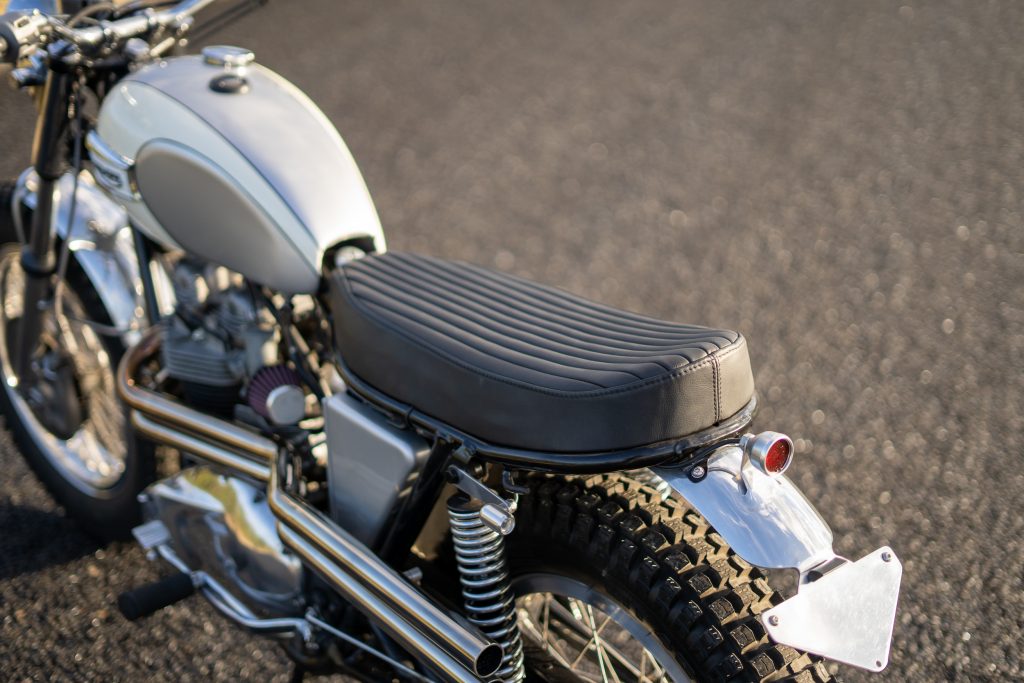 I wanted to retain the classic Triumph Bonneville Desert Sled Lucas headlight, and the nice low-profile handlebars too. The challenge was decluttering the whole set up whilst I was at it. Usually with our LED headlights and aftermarket gauges everything is a lot smaller, and easier to tuck in nice and tight how I like it. The solution here however was a little more complex. 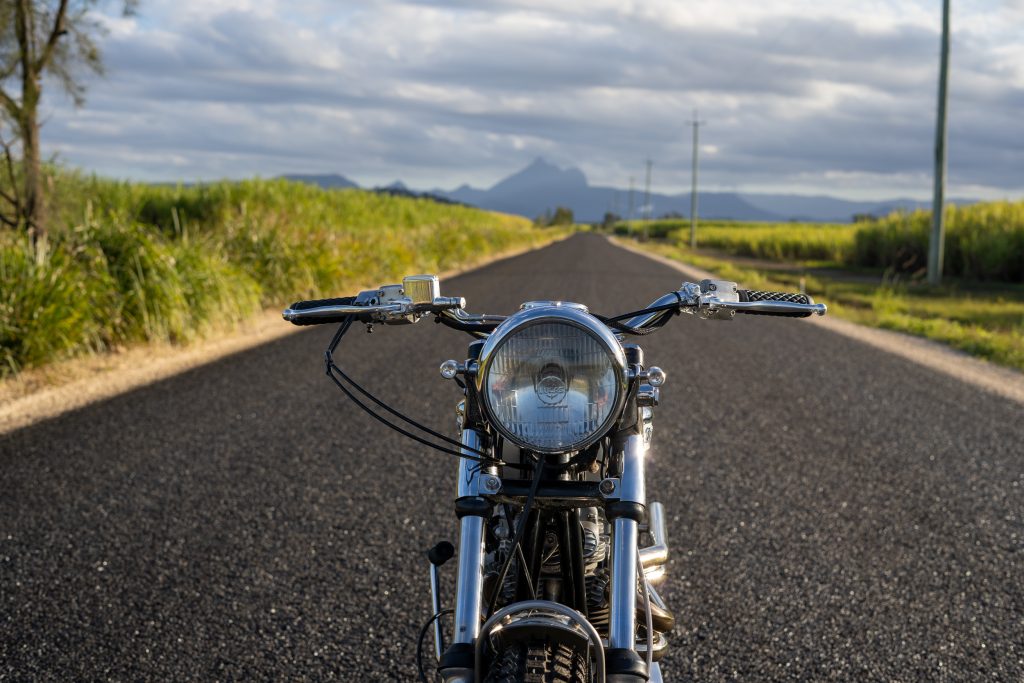 Retaining the factory headlight mounting ears, that house the key and lighting switch was a must, and so was the nice headlight. The Tacho was ditched but we’ve custom fabricated a cup for the original speedo that’s been frenched into the headlight housing. The mod here creates a smooth silhouette from the side, and a de-cluttered cockpit. We’ve also included some new dash signal lights on the headlight and used a set of Purpose Built Moto Chrome LED turn signals that double as the headlight bolts. This set up along with the bars and a tonne of original parts from the bike were cleaned and re-chromed to a mirror finish.

The Triumph Bonneville Desert Sled bars are dressed up with some re-conditioned original switches, and a set of Kustom Tech levers. Again using some modern touches but keeping that vintage charm.

A big ticket item on this build for Azad was to get that classic Desert sled Exhaust, running high down the left side of the bike. It’s always a bit of fun when you’re tasked with a super nice exhaust build you can take your time on and make perfect. Fabricated in stainless steel, finished back and brought up to a high polish. After the test ride they’ve turned a super nice straw gold. 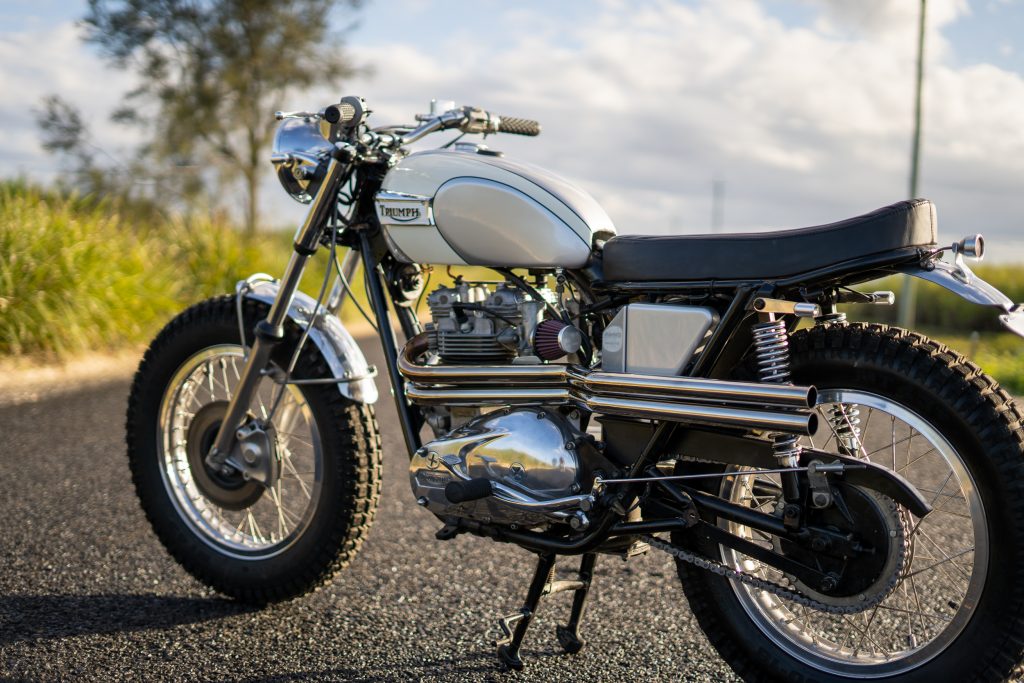 We’ve oversized the headers here so we could keep the straight pipe look, but included some muffler cores and packing in the very end of the pipes. This method takes the tinny ping out of the exhaust, smoothing the note out a bit but still allowing the old girl to scream out the pipes!

Last bit of fab work was the custom seat pan. Retaining the high foam, long bench style seat of the era, but with none of the messy frame gap. Once shaped with foam, Jamason from Timeless stitched us up a simple and elegant leather cover. 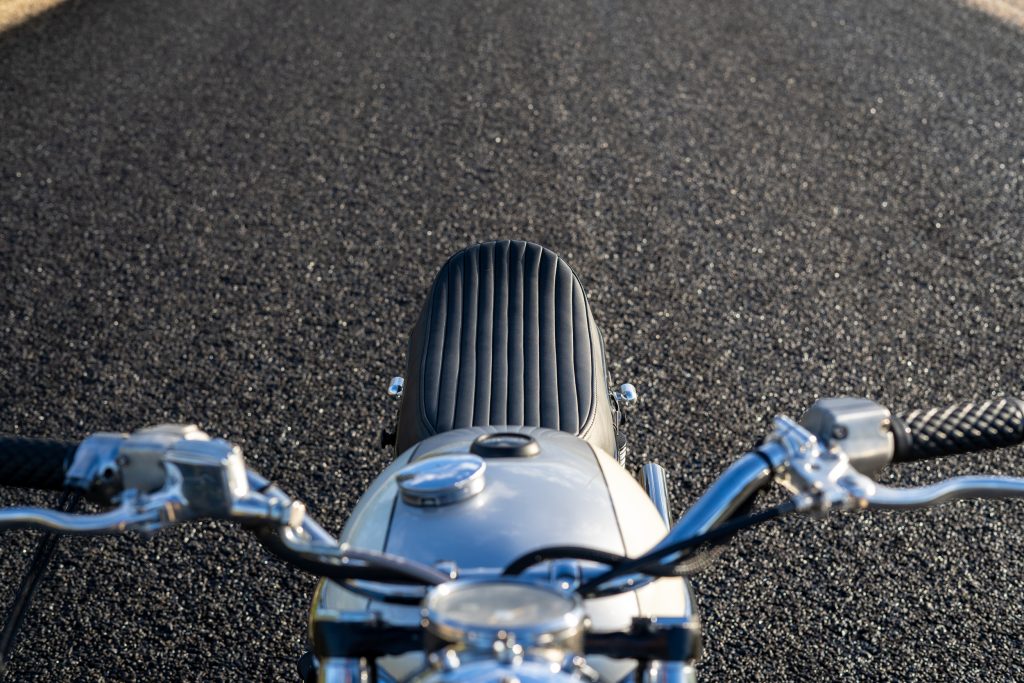 Engine wise the triumph has been given a spruce up with a rebuilt set of carbs, including all needles and jets, a boyer ignition and was given a once over of the top end. According to the owner it used to run strong and he was actually on the money. The motor was in great condition inside, so we polished up the outside to match, replaced the leaky gaskets and kicked her over a second time on start up.

There wasn’t much to do paint wise with all the chrome and polished alloy on the bike, but no matter how small the job, Justin at Popbang Paint never does the job by halves. He’s laid down a stunning silver and off white detail.

Being our first vintage triumph, I’d never actually ridden one of the old triumph twins. About 3.5 seconds into my test ride I fully understood why these bikes were just so damn popular. The sound from the exhaust and rattle of the engine is what draws you in, then you rip back the throttle and the dinosaur can move! Surprisingly fast and with the suspension brought into line it’s a killer bike to get around on. 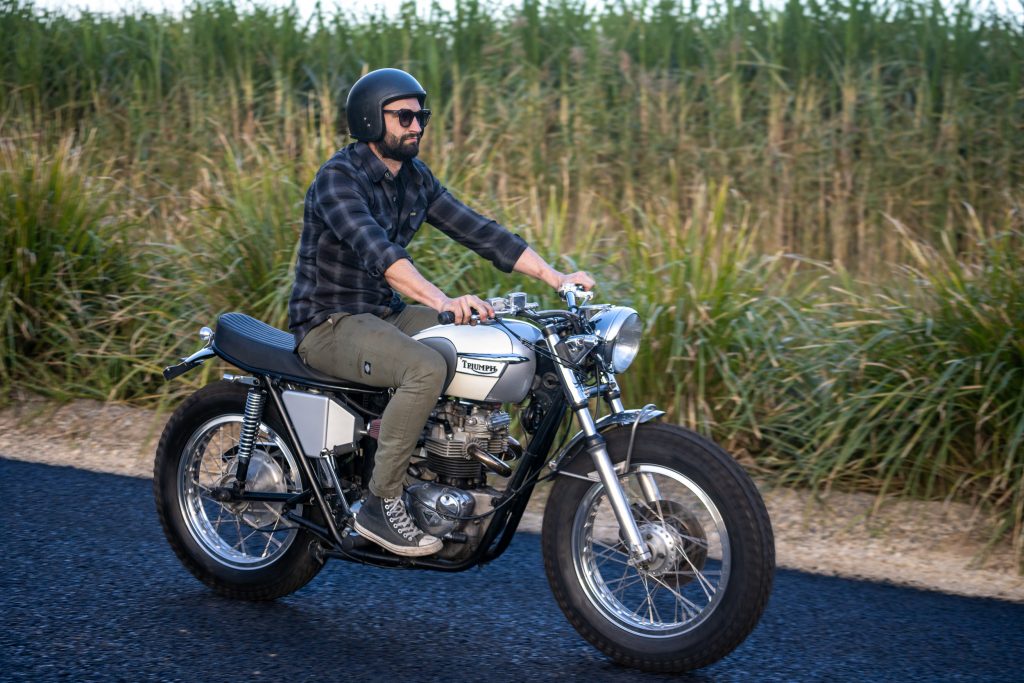 Seeing as I had to hand it back over to Azad to enjoy for many years to come, I might have to add an old Triumph Bonneville Desert Sled to my ever growing list of bikes to own.

What do you think of this Triumph Bonneville Desert Sled? I’d love to hear your comments and questions about the build so let me know if you have any using the comments section below.