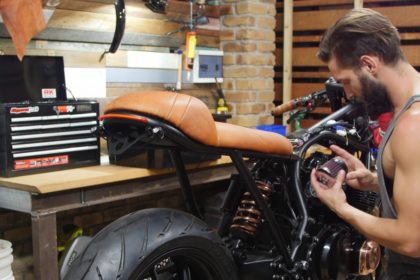 It’s a dangerous thing when I get bored. Previous outcomes of my boredom over the past few years have resulted in taking a second job, quitting a job and heading overseas, tearing out rooms in my house to renovate, and starting a degree in engineering on the side. This particular attempt to further fill my time was one of my all time favorites to date, and came out of some rather odd circumstances. I was stuck out in the Pilbara desert, a beautiful part of Western Australia for what seemed like an eternity lived three weeks at a time.

Between work and study I would browse various classified sites looking for the right cafe racer parts or a cafe racer project when I stumbled on what seemed like a nice blank canvas. I had seen a few pictures through social media of bikes that guys had resurrected into a café racer and thought, with every ounce of arrogance I had,

“I can do better than that.”

I placed a bid on a 1981 GS550E Katana that I just so happened to win. My starting point was set. 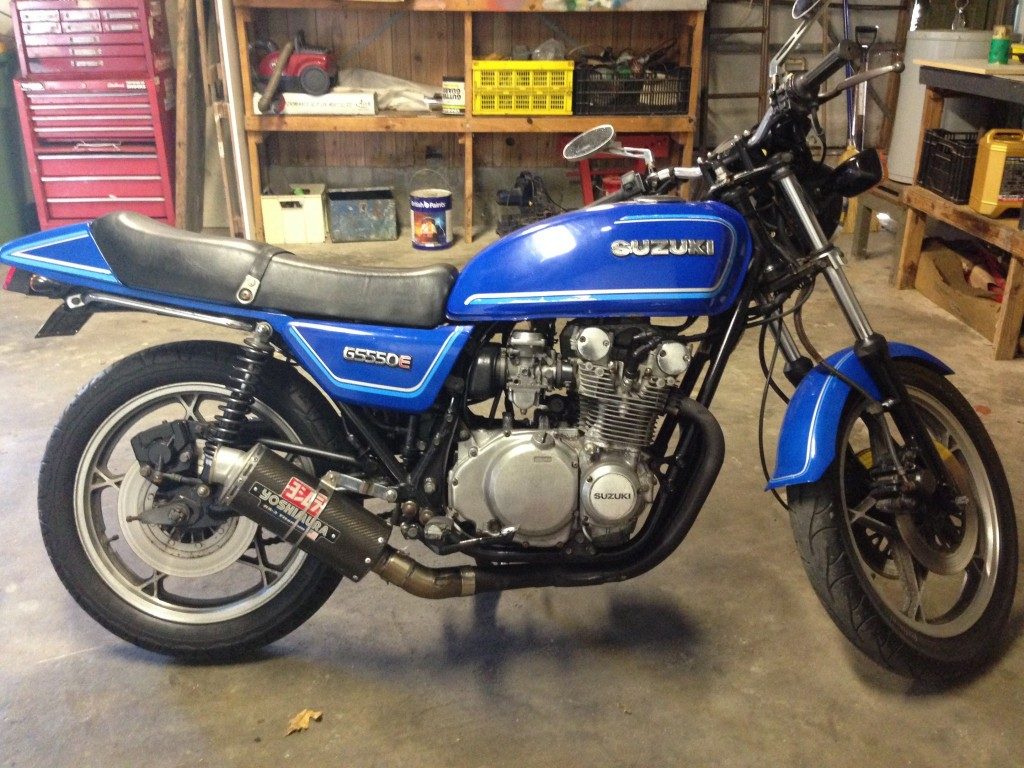 I picked up the bike in Brisbane and chatted to the owner; a postie/ bike mechanic that had plans to fit it with a turbo but just never got around to it. He even offered me the turbo he had… I declined respectfully, not having that much faith in my abilities at this point.

While loading the bike on the trailer I asked about the two huge dents in the top and side of the tank.

“So what happened here?”

He chuckled then replied, “I was fixing the electrics!”

I had a puzzled look on my face. He continued with “It can be a frustrating job on these old things”.

Turns out the dents were part of his functional problem solving, if step 5 doesn’t work, punch the tank and start again.

I got it back to the garage, got it running, rode it, checked the engine over and started with 3 points in my build book. 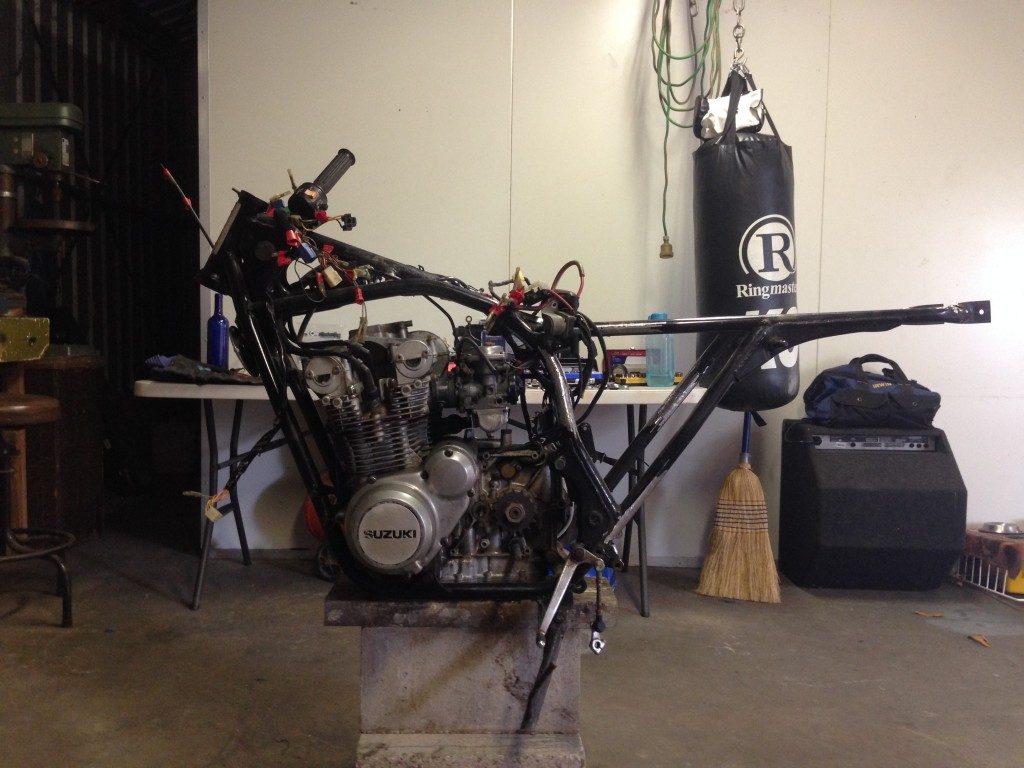 I wanted this bike to be my weekend rider, built to ride out over the Gold Coast Hinterland and down over the border on day trips. Having a unique modern look but giving a nod to the classic café racer style customs that influenced me to get the bike.

The Suzuki was stripped bare, all tabs cut off and the tail section removed. Pulling the front and rear ends off, I realized just how heavy early cast wheels are so I sourced a complete Suzuki GSXR front end, a Ducati Single sided rear and matching Marchesini wheel, both wrapped in Metzeler Rubber. The frame was widened and braced in the back to suit the new mono-shock setup and the standard Sachs spring was rebuilt to suit the removal of the linkage. 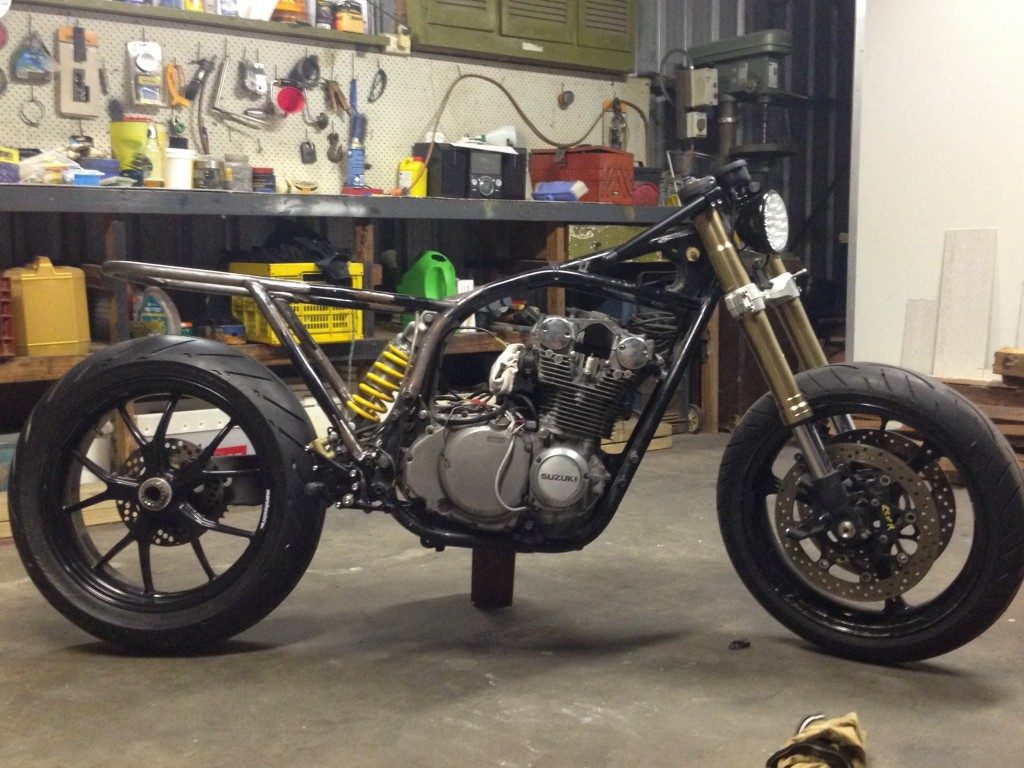 The front guard and brace was fabricated to keep things legal and I actually really enjoy the bulk in the fork brace style bracket. The rear subframe was built with simplicity in mind, nothing special, it just had to work and give that cafe racer tank/seat line. The tank was modified to add some detail with cafe racer style knee dents and seat fiber-glassed, foamed, then covered in a copper tone buckskin. I utilized some Aprilia RSV4 rear sets to accommodate the Brembo Master cylinder and fabricated new mounts on the existing frame. 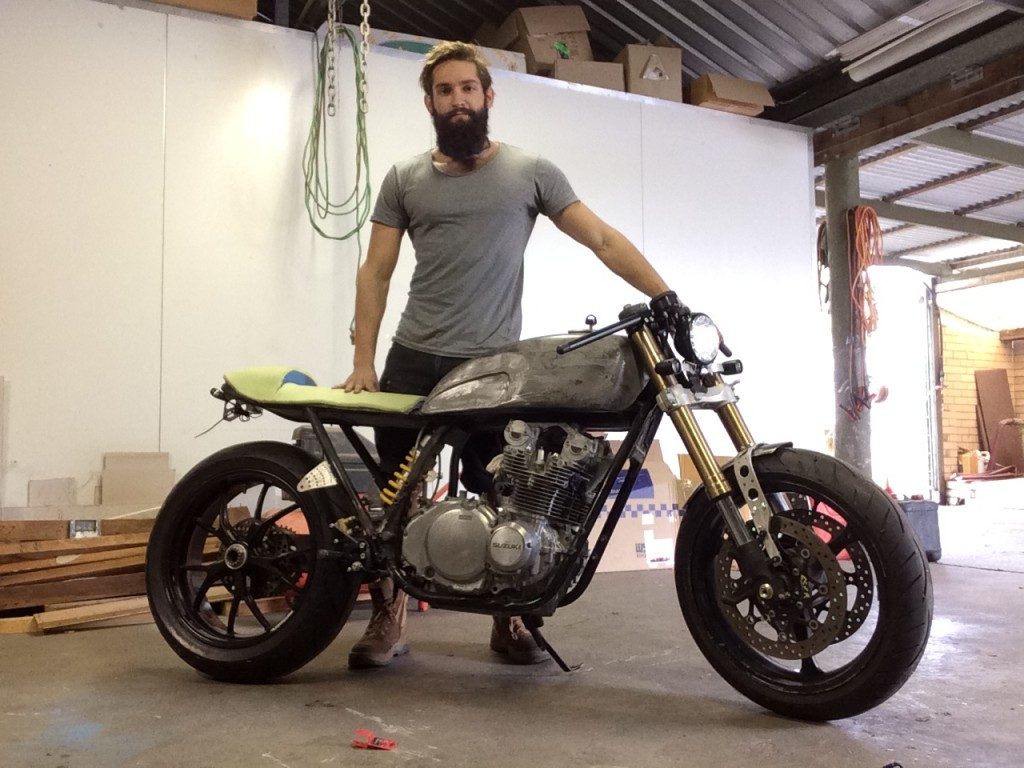 The Mikuni Carbs were stripped and given a DynoJet Stage 3 kit and a set of K&N pod filters, the head was checked over by Palm Beach Racer and the engine given a coat of Gloss Black. Other mods included Custom Built Full Stainless steel 4-2-1 exhaust and Purpose Built Moto Shorty Missile muffler (will be on sale soon), hidden battery box and electrics hung under the swing arm, a nice LED headlight I got a hold of and copper coated with the rest of the parts, a complete re-wire utilizing A Motogadget M-unit at the heart of the electrical system and some CAD Designed Purpose Built Moto Slim Push button switches and LED indicators with hidden wiring. A gloss black paint job on the tins against matte black frame and wheels from Jason at The Panel Shop Mermaid finishing off the bike nicely. 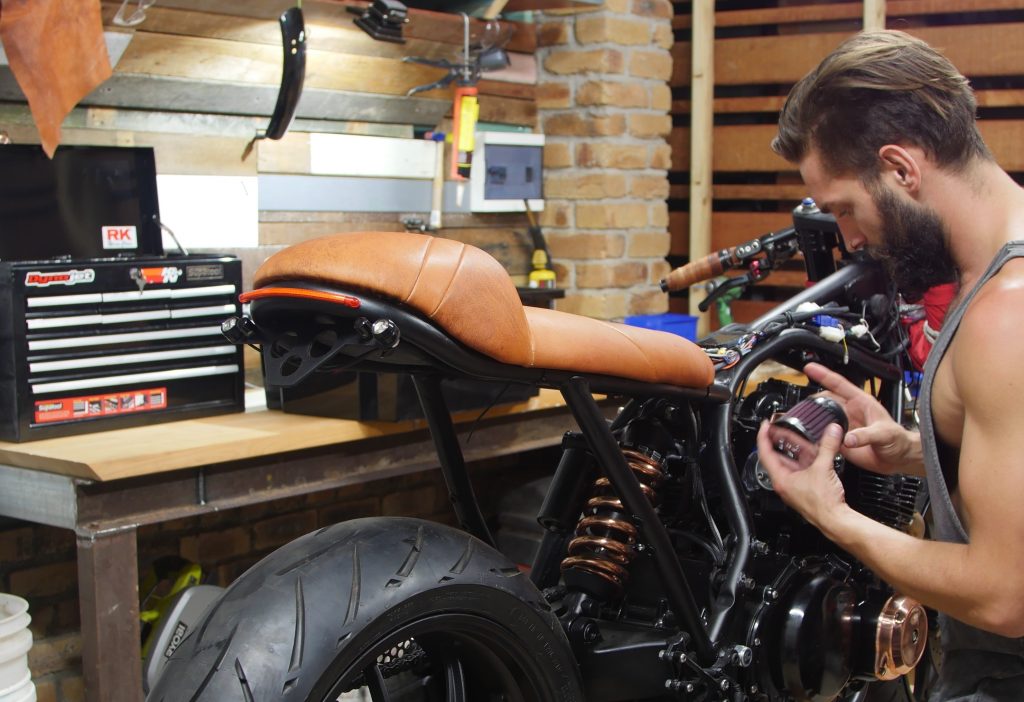 After getting the bike off the dyno properly tuned and balanced it runs like a dream, with the engine only having 20,000km from new it was, for the most part, left alone. The exhaust system helps deliver a nice smooth power curve right through the range while the muffler keeps your ears from ringing and delivers a great note from a smaller capacity engine. Due to the suspension change out, it’s been given a more aggressive forward stance. Moving the pegs back and up slightly, and not shaving the seat too much gives a feeling of great control when you ride.  Seated over the bike it feels like you’re grabbing it by the neck and telling it exactly what to do. There’s no guesswork while riding. 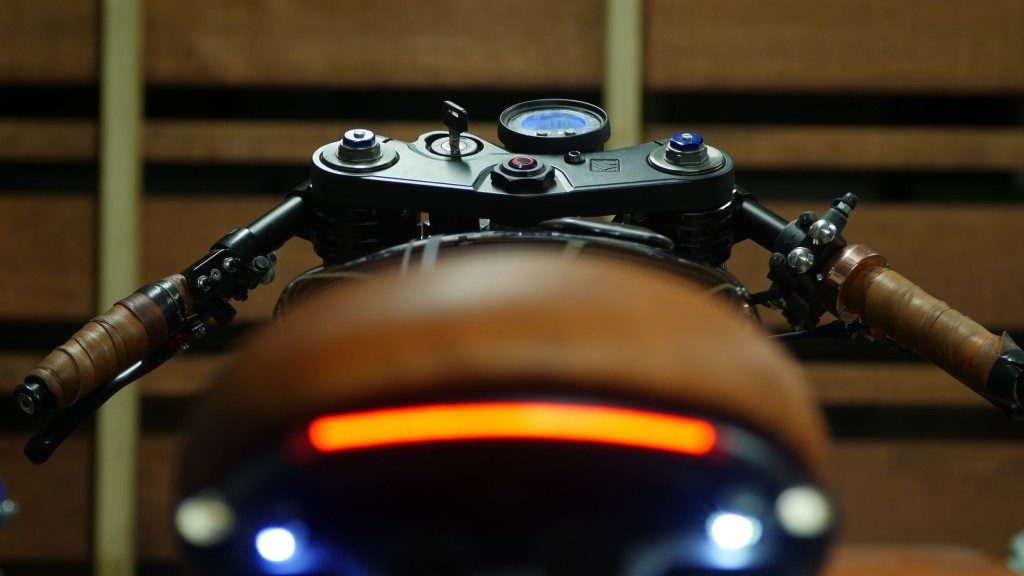 Taking the leap from dirt bikes to a street custom was a steep learning curve that resulted in a lot of lessons learned and the full product line up you can view in our online store. Each piece was designed and built out of a necessity for use on my GS550 cafe racer, with more to come as we keep on building!

Check out the full gallery of the GS550 Border Run completed 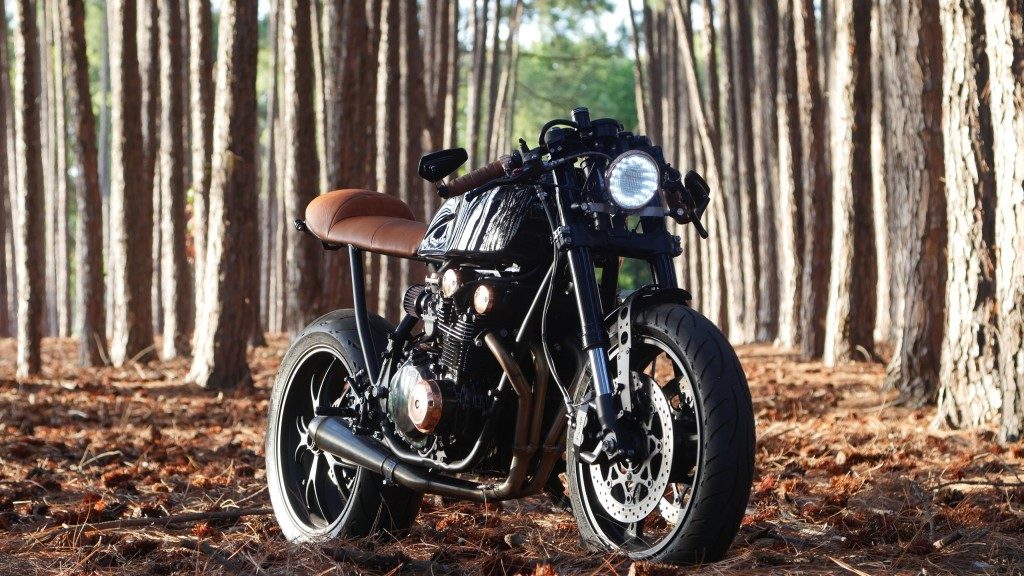