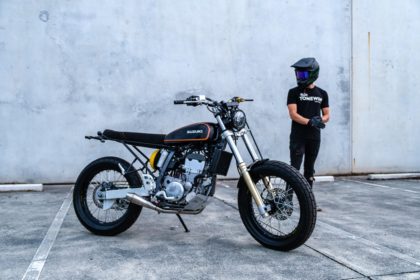 It’s not often we take on a half project where we agree to help out with the in-between stages of the riders build. Generally Purpose Built Moto builds are done from start to finish in our workshop, at our hands. However, this DRZ400 and its owner had a different path, and anyone that knows the owner Tim knows that you can’t say no to him.

The Bike had initially been bought for some off road trail riding, but after a couple years of that Tim wanted something a bit more fun on the streets, and so started the DRZ400 Street Tracker project. 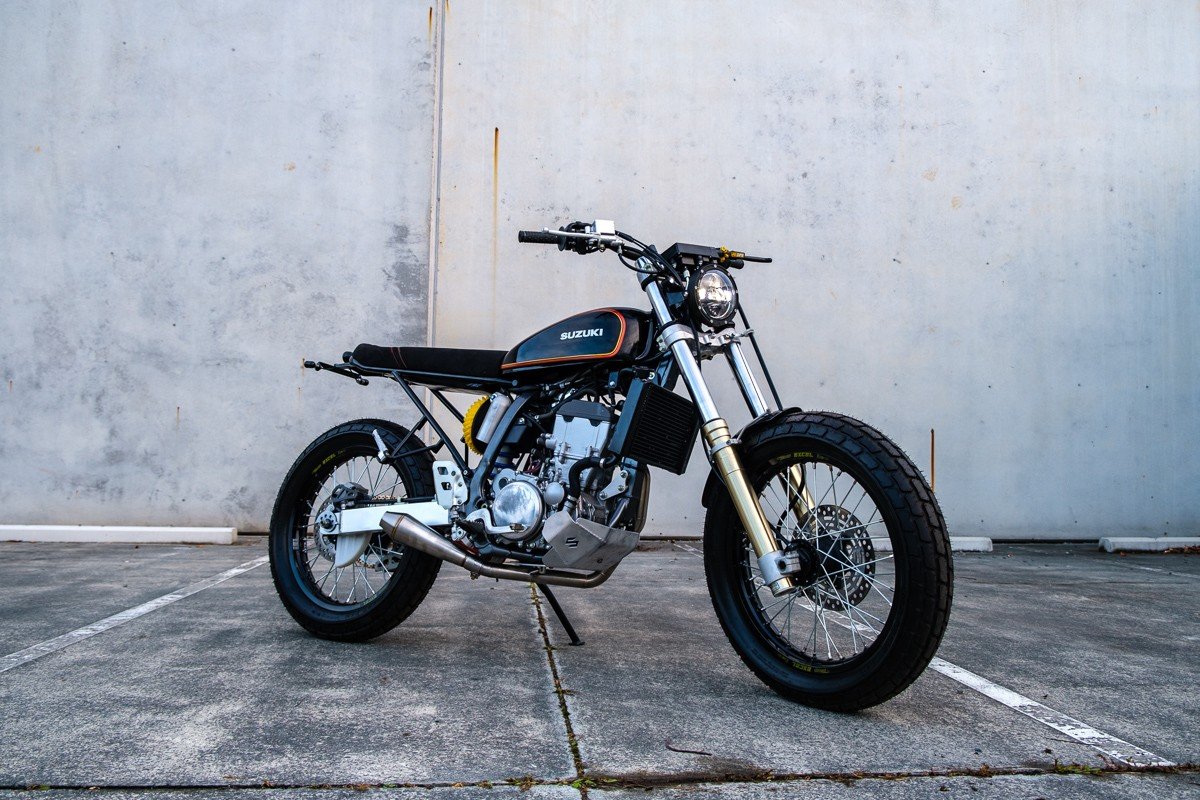 First on the list was ripping off all the plastics and re-building the wheels. Using a set of 19” excel rims, re-laced to the stock hubs then wrapped in a set of Shinko tracker Tyres. That set the mood for the project and next steps were fitting a new classic style tank, and a radiator conversion.

I had a tank at the shop that happened to work perfectly, So I gave that to Tim for mock up in his home garage while he played with the radiator conversion. The DRZ uses an ATV radiator mounted to the frame, with a few custom fabricated brackets welded on and a set of new hoses the job was done. With all the plastics removed Tim fitted up a new Honeycomb filter that grips onto the stock intake manifold. 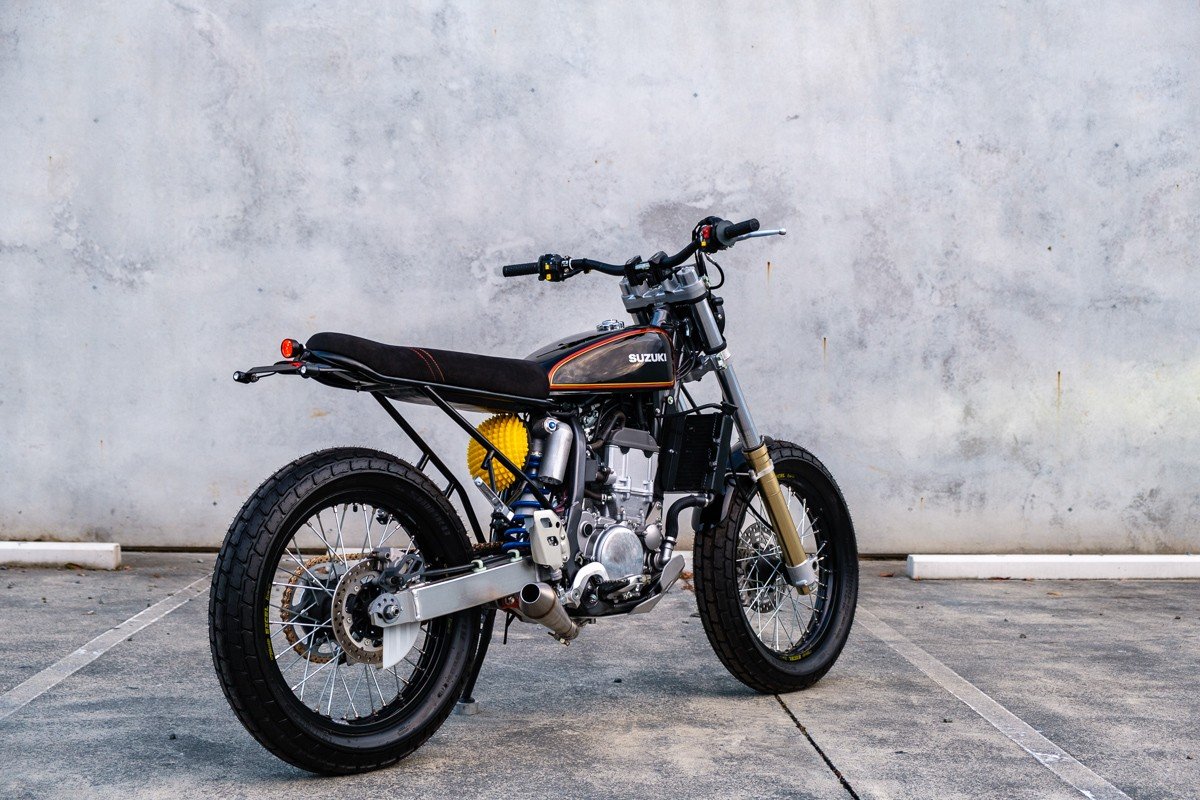 At this stage the DRZ400 was wheeled into the PBM workshop. We had a long list of jobs for this one biggest of all was the Custom subframe and exhaust. Doing away with the entire rear frame meant we had complete freedom on the seat section. The most difficult part was dealing with the a symmetrical lower mounting points on the Suzuki’s frame. With a few carefully placed bends and some specially fabricated mounting lugs, if I didn’t mention the subframe wasn’t symmetrical you probably wouldn’t notice. 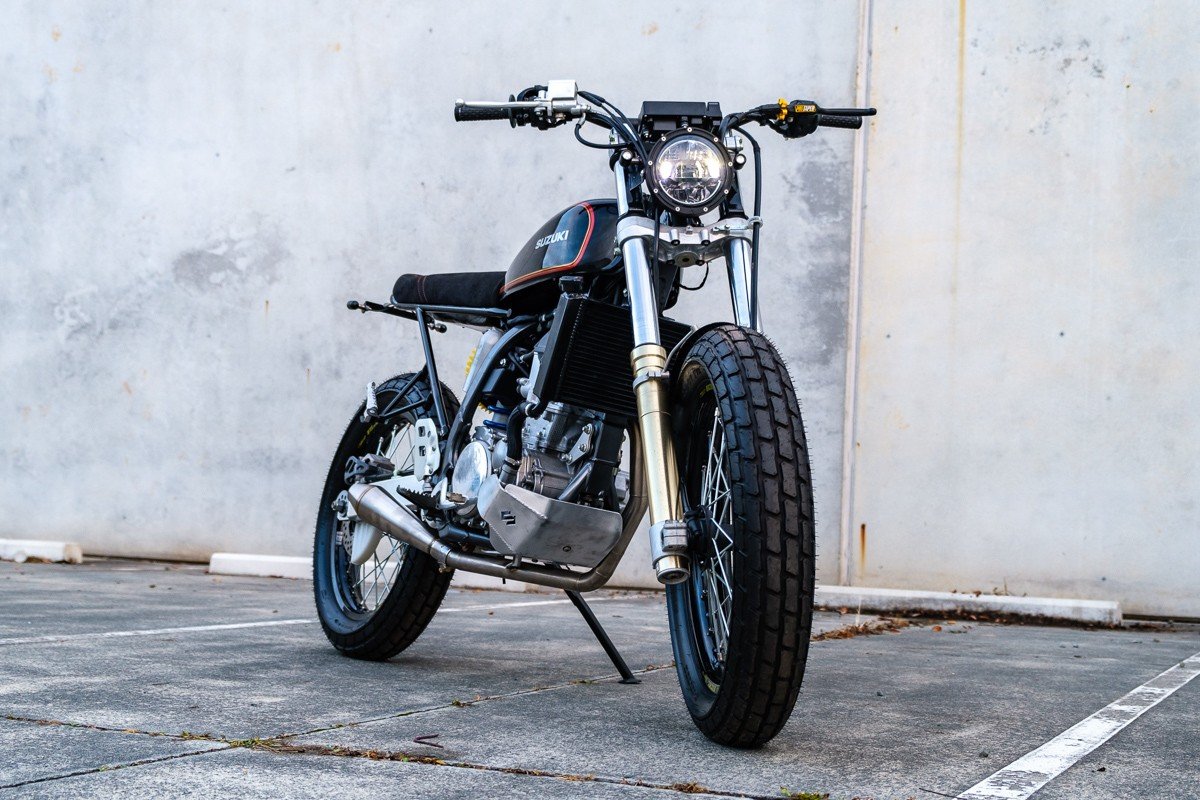 Built from 19mm Chromoly tubing and including some removable pillion peg mounts simplicity was the key to this one, and having enough seat room that Timmy could throw a chick on the back and go for a run up the beach if the mood striked.

On the seat section a flat brat seat was the request, with a simple tail light, fender and tail tidy set up. Using a small cut from a universal aluminium fender, our Orbit LED tail light and a set of E-marked Dome LED turn signals. The DRZ tail is minimal, functional and suits the bike perfectly.
Jamason from Timeless kept with this theme and turned out an all alcantara seat with some subtle red and yellow details. 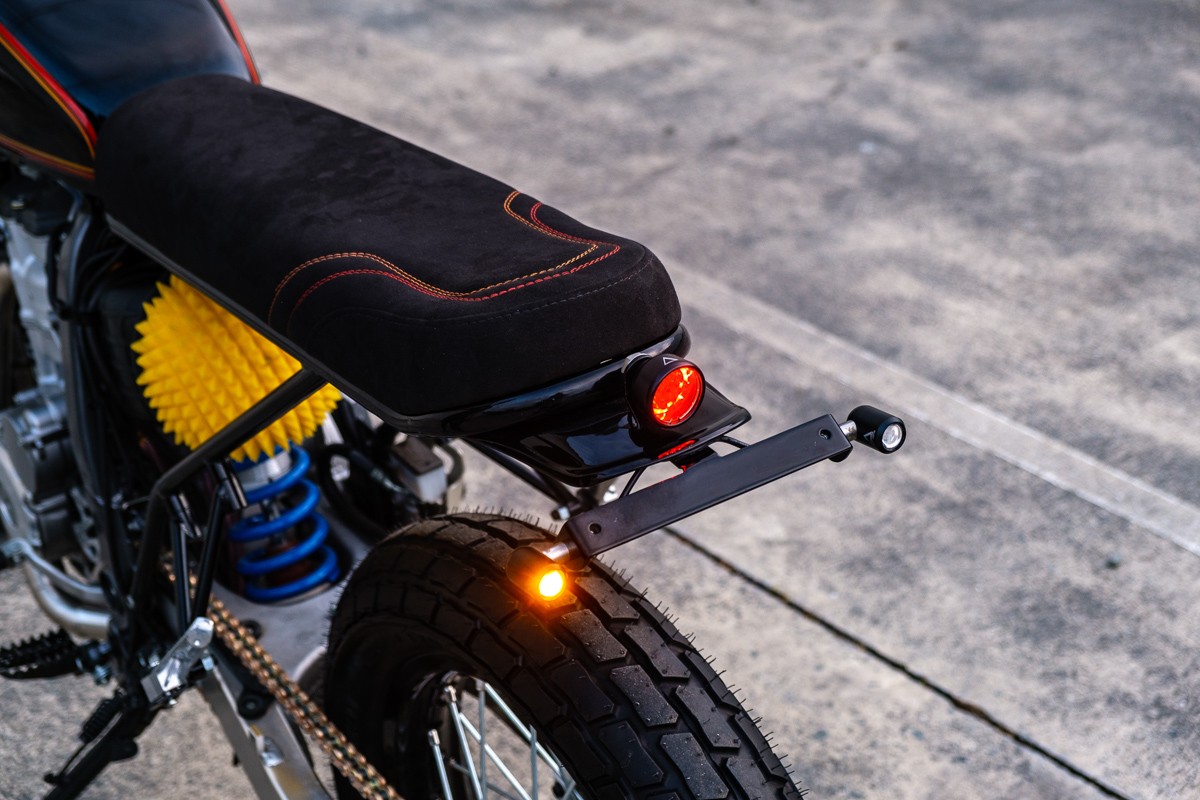 With that done the suspension was lowered, and stiffened for a better ride on the street. The DRZ doesn’t sit as low as most Street Tracker type builds, but this was a choice from Tim to keep the bike enjoyable and comfortable to ride.

Mounting of the tank was simple, a few custom fabricated brackets, linked to the frame via some rubber insulating mounts. Using a similar method to our Signature series Ducati build to make sure the vibration from this big single wont worry the new steel tank. Finished in a gloss black with candy fade red/yellow pinstriping and a bold silver Suzuki logo all painted in by Justin at Popbang classics. 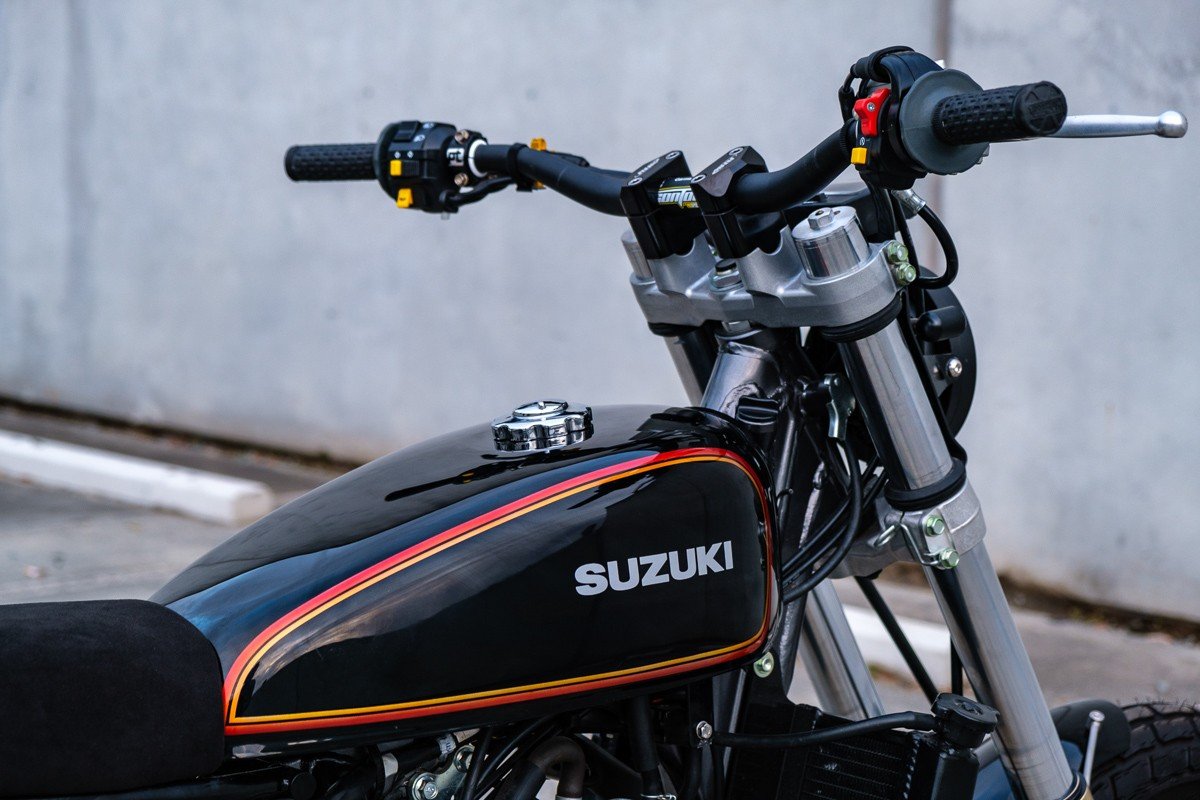 The MX pro-taper bars have been retained from the DRZ400 trackers dirt days, and tidied up with new grips. Lighting on the front end is a 5.75” Flashpoint X-type headlight, a new release from the PBM lighting range complimented with Dome LED turn signals.

Finishing the front end was a little bit of tricky fab work. As with all dirt bikes, the DRZ was born with a high mounted plastic front fender. This meant there was no provision for a low mounted fender. Using a pair of steering damper fork clamps, and our very own Purpose Built Moto Universal fender mounting kit. We were able to fabricate up a super clean front fender, neatly fitted onto the new 19” wheels with a minimal of fuss. 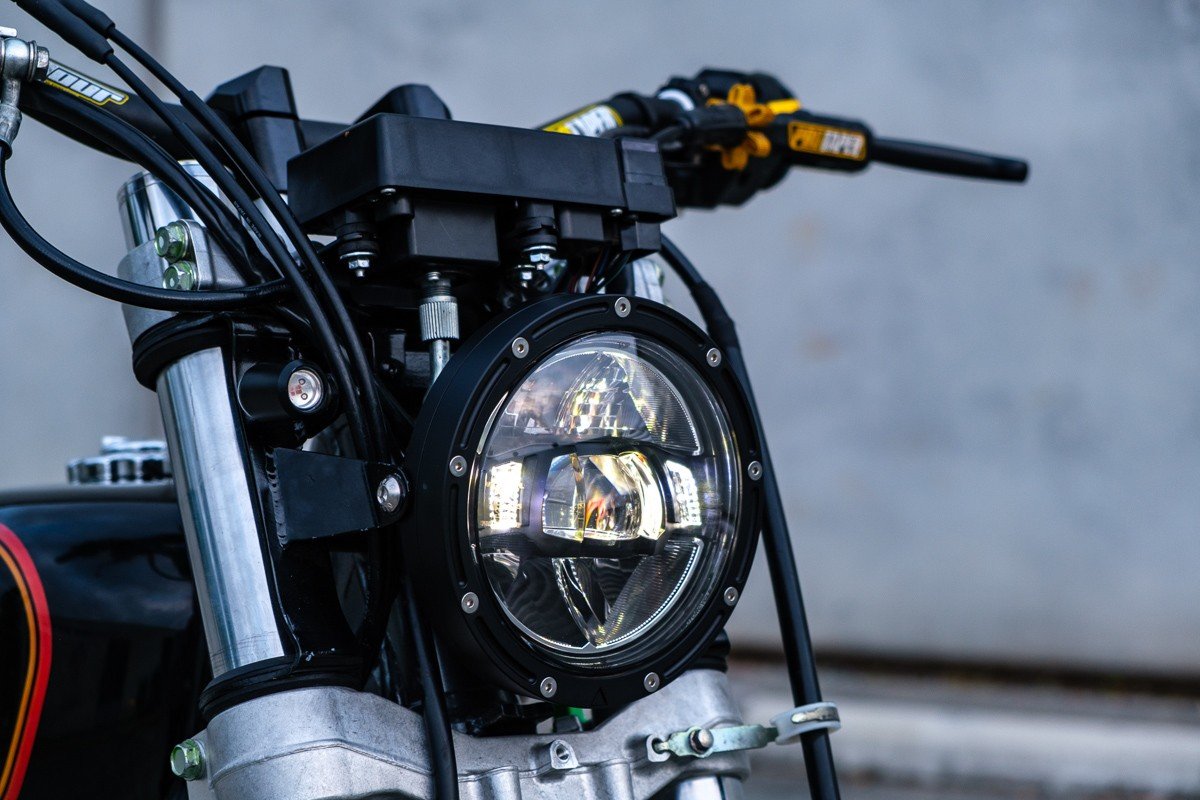 Our final touch on the bike was the custom exhaust, a painfully simple underslung stainless steel header linked to our 41mm or 1 5/8” torpedo muffler and the job was done. The DRZ400 street tracker barks a smooth and deep note. 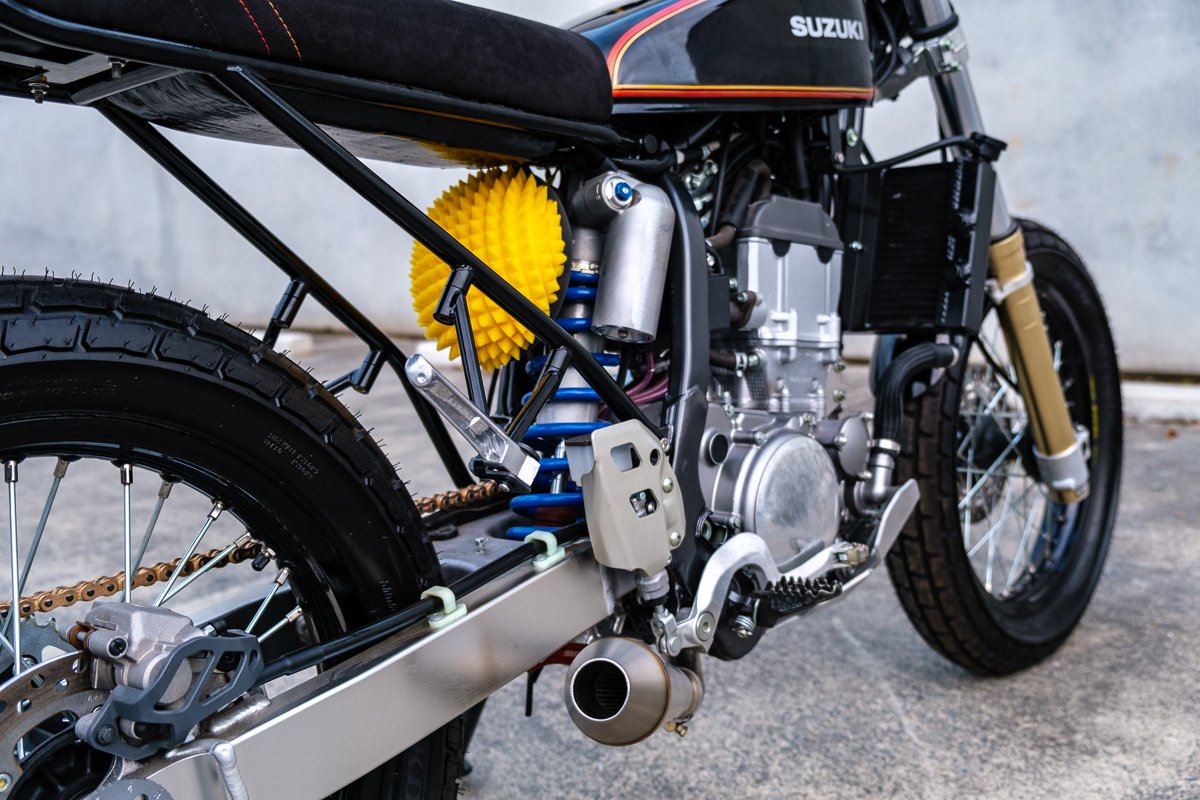 Its been a quick paced project for us, and with Tim’s help made it happen pretty smoothly. Make sure you jump on and check out the Youtube video complete with a test ride on the build.

Check our Online Store for custom motorcycle parts for your build! 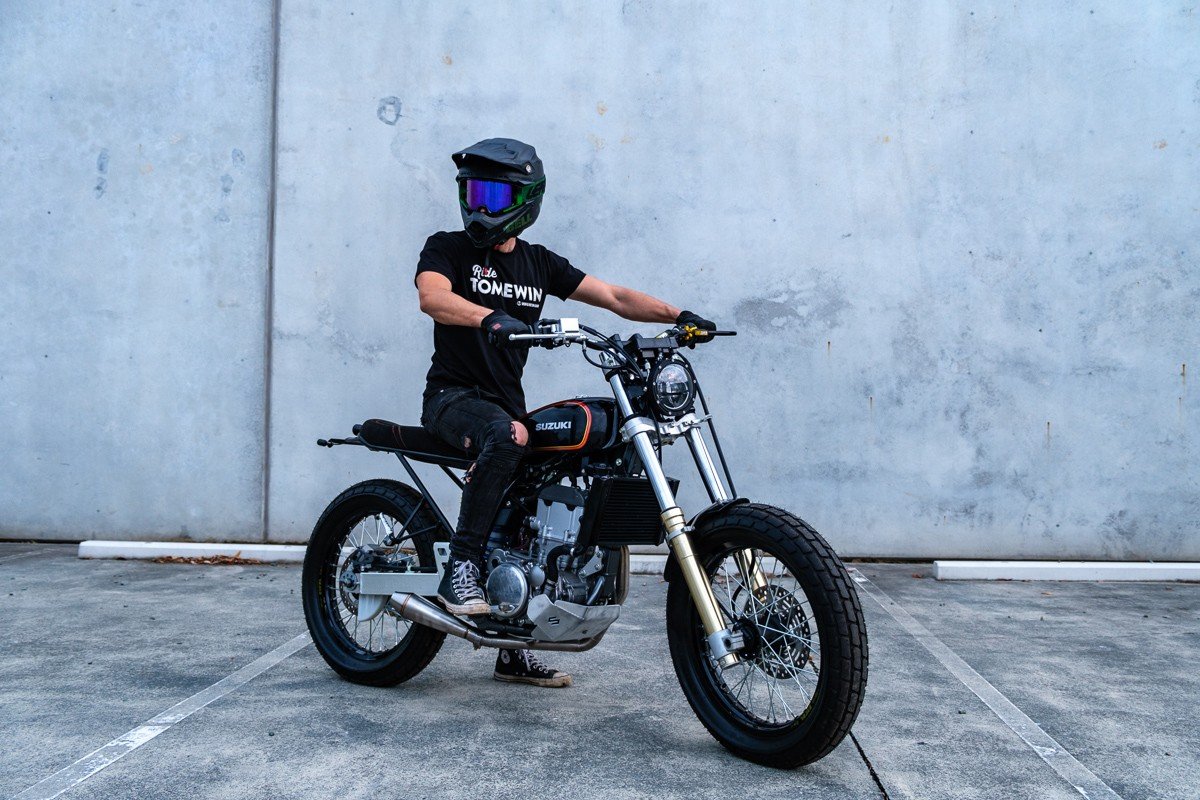