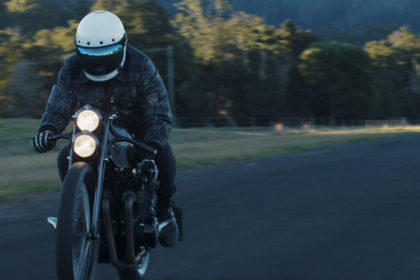 While I was in the throws of building my first bike, the 1981 GS550 that you’re all familiar with, I had a notification pop up on my Instagram. Some guy called Popbang Classics liked the picture of my bike before it was stripped for paint… so I checked this guy out and was blown away. Someone on the Gold Coast, not 20 minutes from my house was making some of the most incredible and out there bikes I had ever seen. The info was light on this enigma but over the next 12 months we would touch base now and then, swap parts and I’d get in touch if ever I got stuck.

While he probably laughed to himself about my troubles and questions, I was never left feeling stupid. It was such a help to have someone so experienced and talented be so humble and willing to take time. Having a community of like minded people is really important, and in the past 2 years Justin has become a regular bloke to drop in on, have a beer and laugh over the testing circumstances of building custom bikes. Having PopBang Classics as part of the Handcrafted film was a no brainer, while I wouldn’t say I’ve been influenced by Justin, the help I’ve received has been instrumental in keeping me going when shit really hit the fan.

My take on the Bikes that come out of the PopBang Classics lab is hard to put into words. I feel like you could pick a PopBang Classics bike without anyone saying a thing. They have a certain style to them that seems to string all his bikes together even though they range from Choppers, Classically inspired Japanese customs to the more recent Supercharged Café Racers. They All scream PopBang Classics. While the engineering is incredible and he has a habit of making things hard for himself just to learn something new, my favourite thing about everything PopBang Classics is that it never takes itself too seriously. As awe inspiring as the end product can be they’re always fun, and if they are a little ridiculous that’s totally fine. It’s a custom bike, that’s what they’re for.

Seeing the projects take shape in Justin’s shed is inspiring, consistently searching for something different to do and pushing his own boundaries. I’ve learned a lot from hanging out in the shed but the thing that has really stuck is the patience in his craft. It’s not about getting it out the door on time here, it’s about taking the time that it needs and deserves to make something truly special. Whether any one notices it is secondary to the satisfaction of knowing that “I made it”, and no you can’t buy one.

Watch the HANDCRAFTED MOVIE IN FULL BELOW