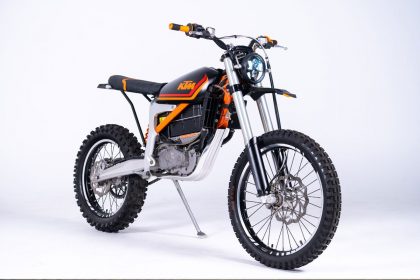 Ask anyone (except salty old blokes) and they’ll tell you electric is the future. Lower maintenance, next to no running cost, and a pretty fun ride experience whats not to love? The long charge times…. But for a lot of riders, a run around on a Saturday morning is about all they need. 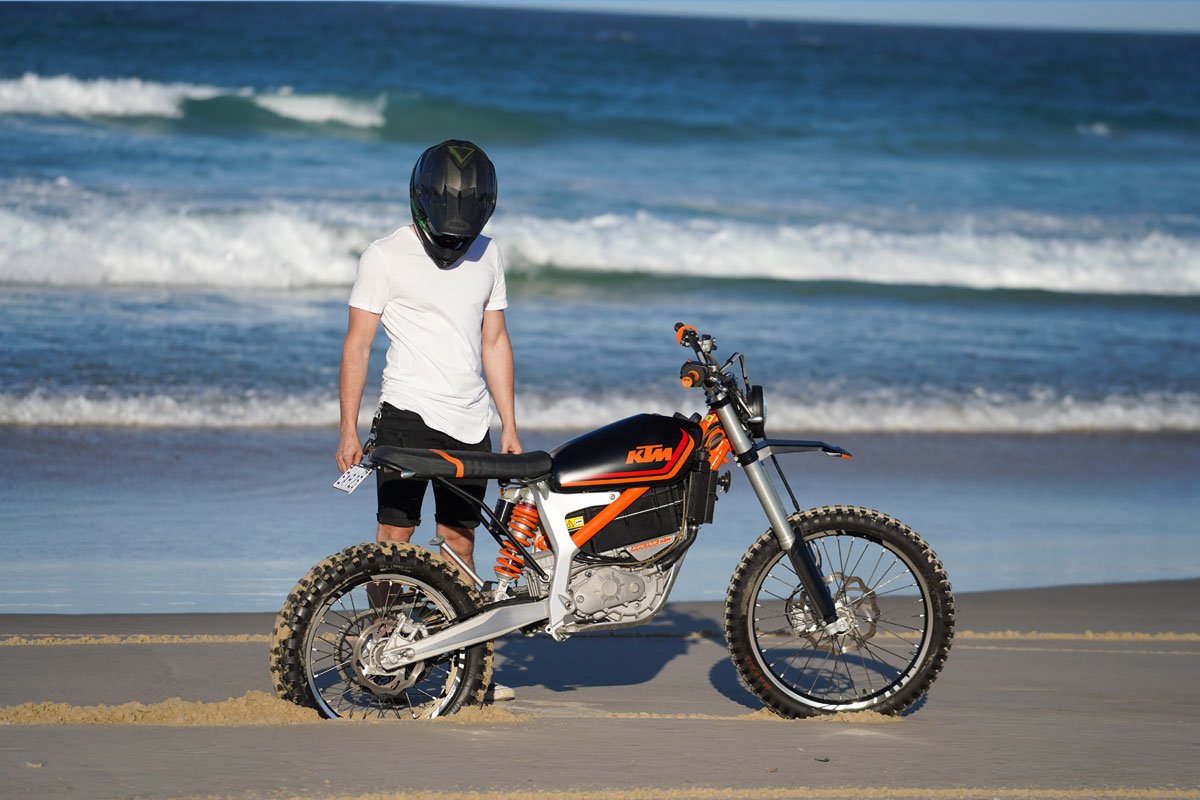 Personally I’m super intrigued to see what happens over the next few years in the Electric Motorcycle space. I know I’m not alone there either. When given the opportunity to try my hand at styling out an electric bike, it was something I jumped at.
The first, a KTM Freeride E-XC, this bike was purely for off road, no lighting was hooked up, no plate mount and draped in plastics.

I was excited to have a ride of this thing, what I wasn’t excited about was the way it looked. Like most E-motorcycles, it had a sharp appearance void of any shred of nostalgia. I think that’s a holding point for a lot of riders to convert to Electric Bikes. Across the board they’re predominantly sports naked bikes. Pointy fairings, high tails, plastic, plastic, plastic…..That’s why we’ve dreamed up GRID CYCLES 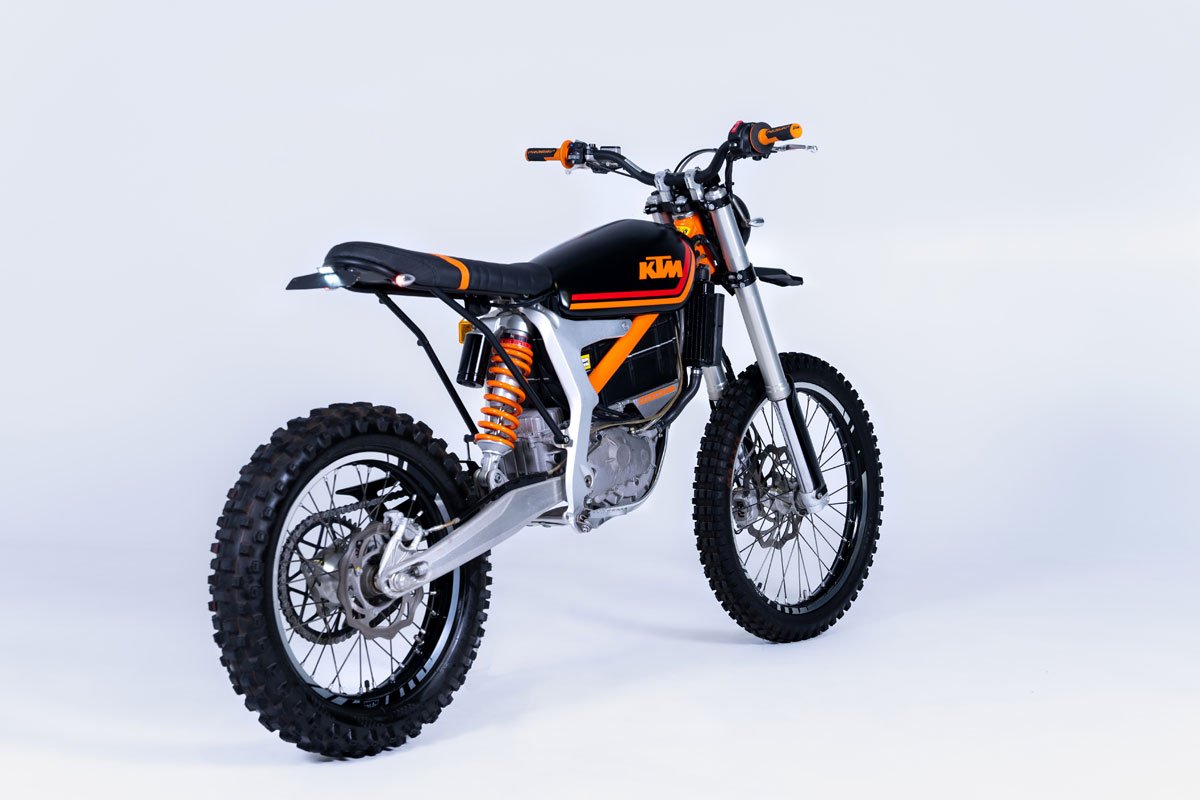 My bet was if I can inject a touch of class, a little nostalgia and jam in a bit of PBM styling, I might just get a few people off the fence and onto Electric bikes. SO with this KTM Scrambler conversion and the Zero Electric Street Tracker project I gave it my absolute best to get a few more people excited about electric motorcycles. With this in mind, we’ve partnered up with another driven E-bike fan to create Grid Cycles. This will be our vehicle to bring bespoke electric motorcycles to the people. Bridging the gap between the cutting edge technology we need, and the old world charm we all love. 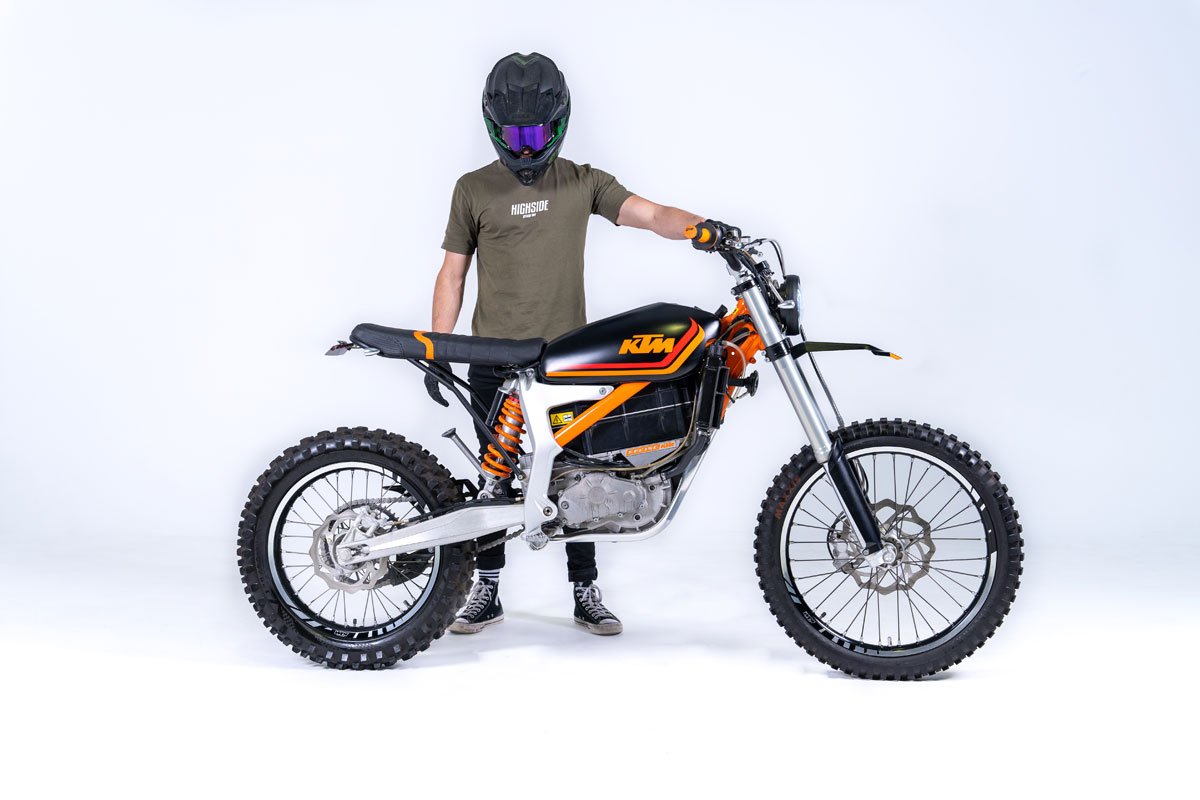 The tear down was simple, being a motocrosser, its build to be pulled down in 5 minutes track side. Plastics off, power pack out, subframe gone. I had bought a few tanks to retro fit over the battery pack, so the measuring started. The Idea was to hollow out the tank by cutting out the bottom, and build a hinge mechanism that would allow the tank to be lifted to access the battery and charge port.

As it happened the perfect for for this machine was a replica XT500 tank from the late 70’s, nostalgic enough for you? With the bottom chopped out, a few mods to smooth it out and locate a button latch then a hinge section fabricated for the rear the tank took time, but went on relatively painlessly. The mechanism under it is assisted with a gas strut, once you pop the button, and lift the tank hinges up nicely to reveal the powerplant, and Auxiliary electronics below. 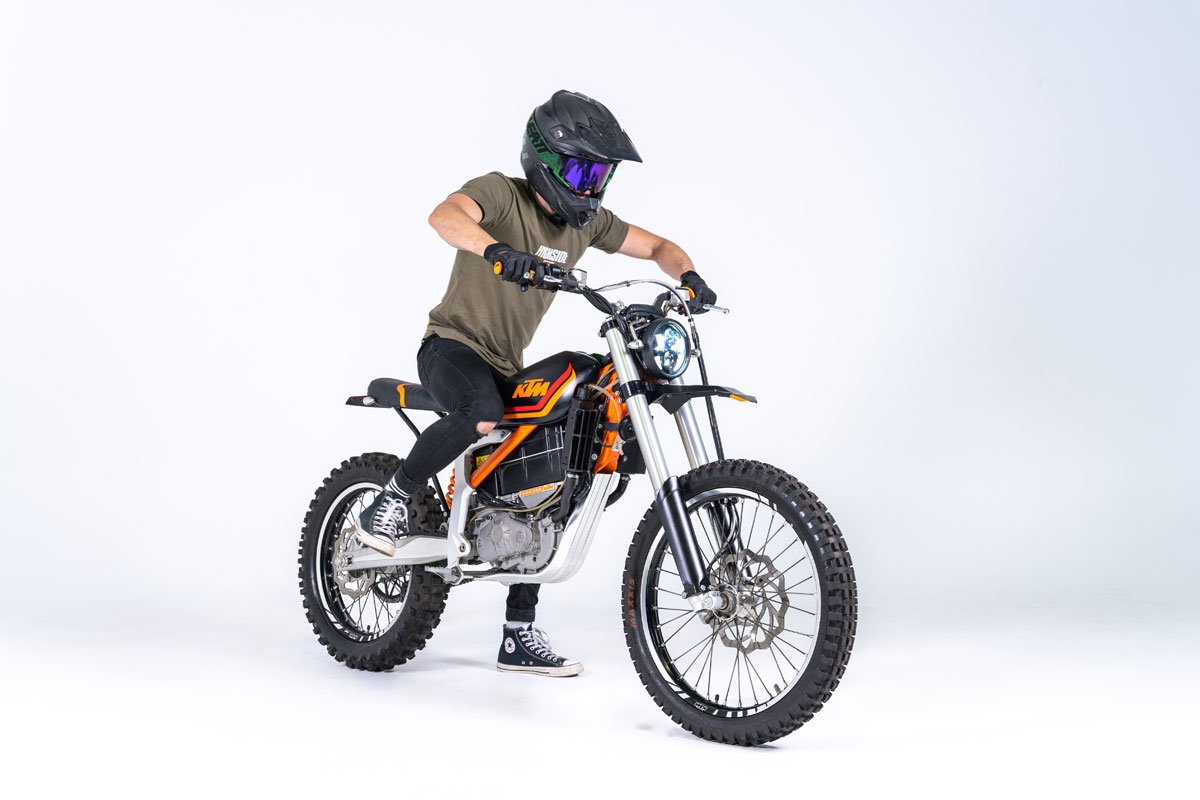 The Idea was to work with the KTM by just modifying the external bodywork. That way we could more easily replicate this bike. The wheels will stay, the frame wont be re-painted, and the running gear would remain untouched.

The seat and subframe was to be kept light and simple. Using the factory mounts we fabricated a 16mm chromoly tube subframe and seat base. The Hinge on the tank was in an odd spot due to the existing frame mount points. That means the seat pan is 2 part and the very front section moves with the tank when its lifted.

To round out the tail we’ve fitted up a set of Hollowtip 3 in 1 LED tail lights, and fabricated a nice easy tail tidy. 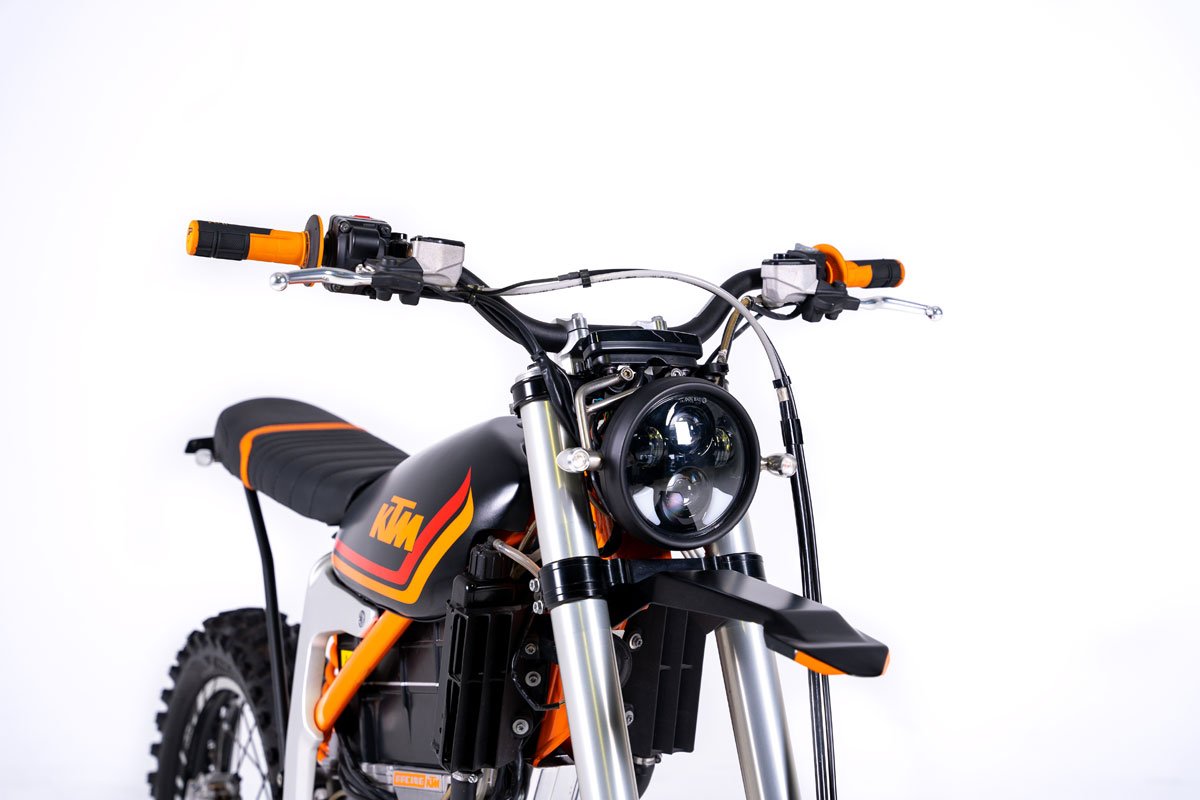 The front end was a bit of fun fabrication. Some tidy bar work to mount up the 5.75” Flashpoint classic and LED turn signals. The Front fender was hand shaped from aluminium sheet, similar to our Harley sportster scrambler fender just lengthened out to cover the 21” front wheel.

The finishing touches came from the colour scheme, I sketched out some retro stripes, placed the KTM logo and kept it simple, Black, Orange, Red. The seat was trimmed to match in a gripper material. I’ve grown to like that stuff, its easy to work with, available in a tonne of colours, worms well and adds a nice bit of texture to your seat.

The KTM is bucket loads of fun, but is speed limited to 80KM/h and with the latest battery pack will get you up to 2.5 hrs of ride time. The bike is super light, handles well and while the top speed isn’t anything wild, it makes getting there a lot of fun. 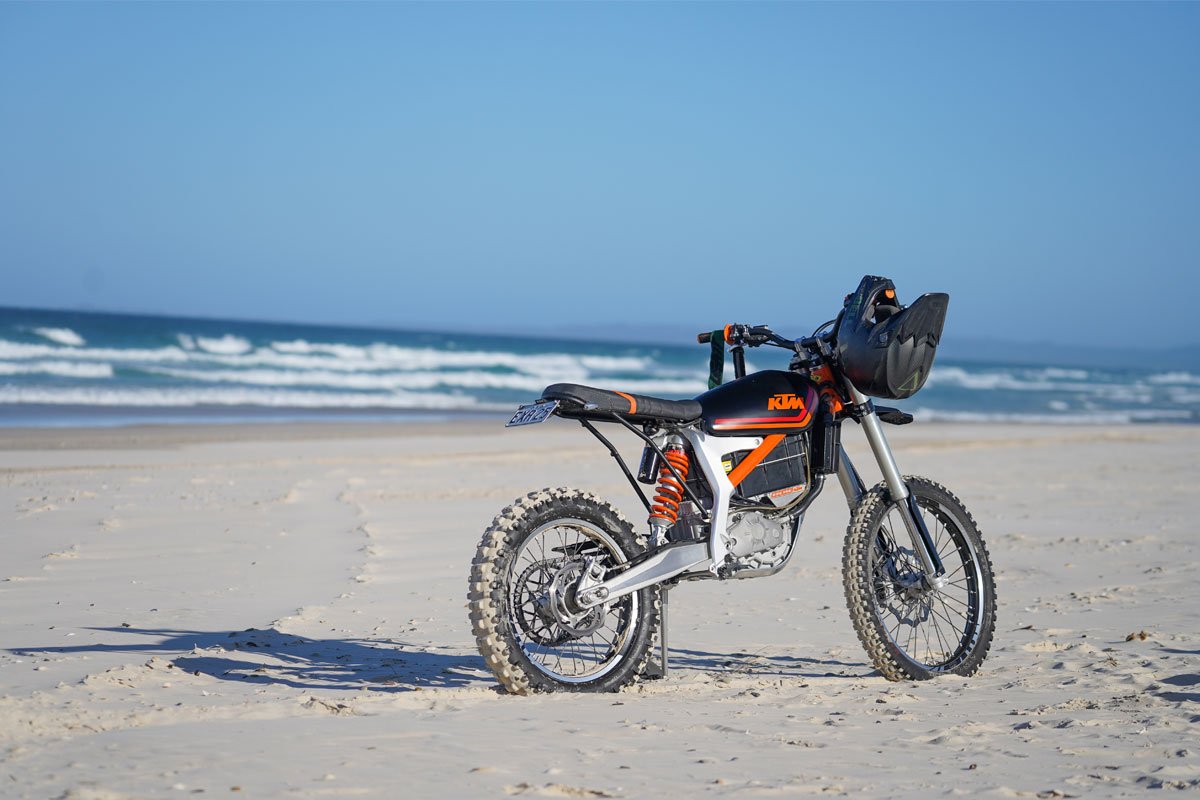 The classic glow up of the KTM Freeride E-XC has worked wonders for its visual appeal. Its no longer your run of the mill plastic draped dual sport, but a cleanly laid out scrambler with an electric twist. 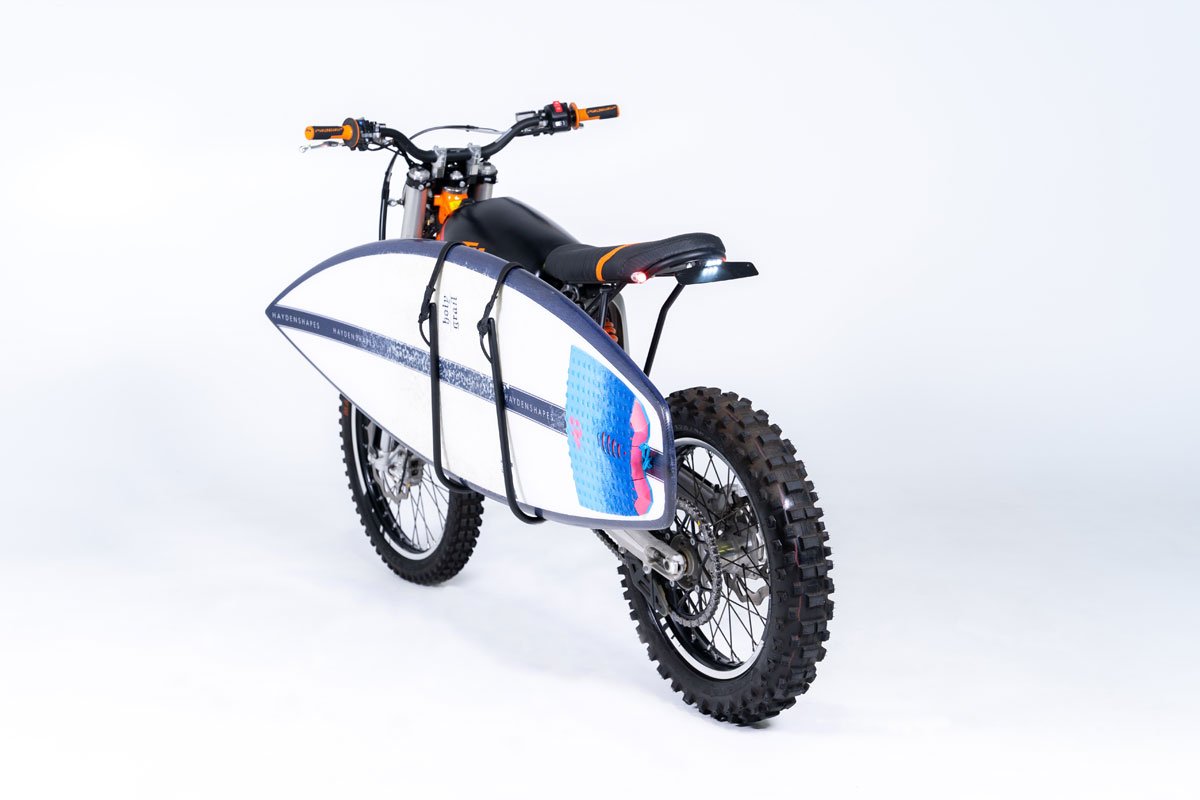 If you want to learn more about our deep dive into electric motorcycles, visit the Gridcycles.com website and keep up with what we’re up to.