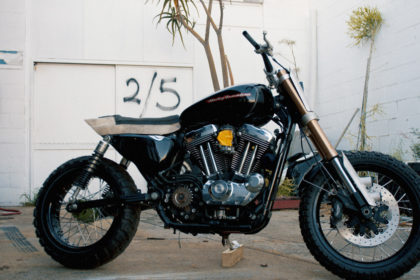 Harley Sportster 1200 Scrambler in the build

In this Instalment of the Harley Davidson Sportster Scrambler – In the Build series you’re going to see:

Each of our builds recently have come along with a photoset and a complete build break down video released on the Purpose Built Moto YouTube Channel and supported by Pipeburn.com .  These build break downs have been really well received however we’re often asked for more details. That Lead me to the end to end build series.

I’m currently in the build on a number of projects, 2 of which I’m going to be walking you through step by step and producing a build series on each of them. A 2006 Harley Davidson Sportster 1200C and a Sol Invictus Nemesis 400. These 2 bikes will be used on new film project we have coming up with some of Australia’s most exciting motorcycle personalities. For now though I’m focusing my energy on preparing and building these bikes to be taken to hell and back. 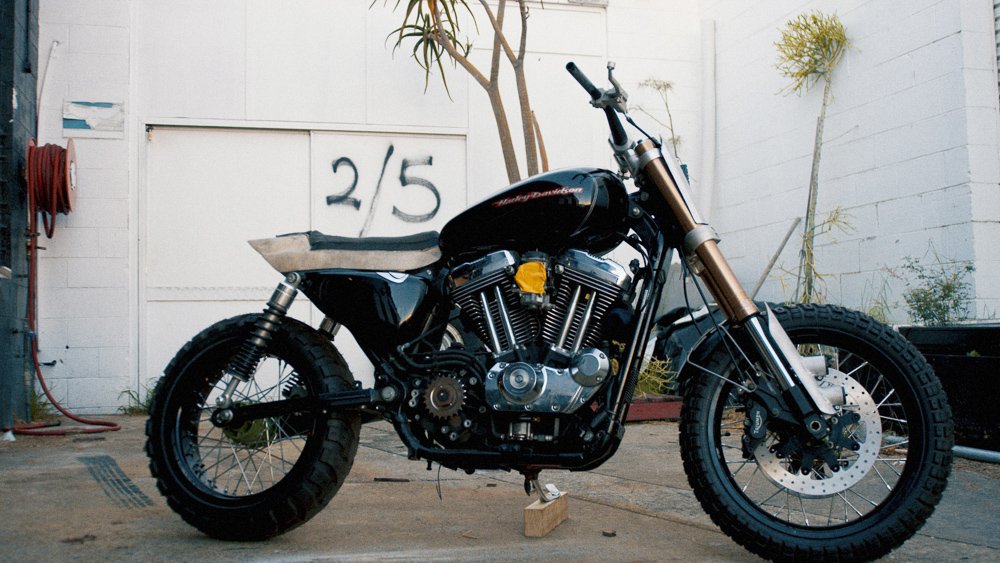 The Sportster is a personal project, something I will test new ideas on, build out concepts that I’ve had in my head for a while and really experiment with just how you turn a 1200cc highway puppy into a dirt fighting dog. Stripping weight, improving handling and allowing the bike to put its torquey motor to good use off road.

It’s going to take a lot to turn a sportster into an adventure ready off road scrambler, but that’s exactly why I chose it. So let me get into the nitty gritty of exactly what I’ve been up to.

First job was to tear off all the parts I no longer needed. Stripping the rear fender, chopping the fender struts, removing the belt drive sprocket from the motor and taking off the amazingly heavy exhaust and foot pegs.  Moving to the front end the Ingition coil was removed, key barrel and the entire front end has been shelved aswell. Another huge weight I found under the bike was the rear brake master cylinder. I think they must have challenged the engineer to make one as heavy as possible and picked the winner for the production line. 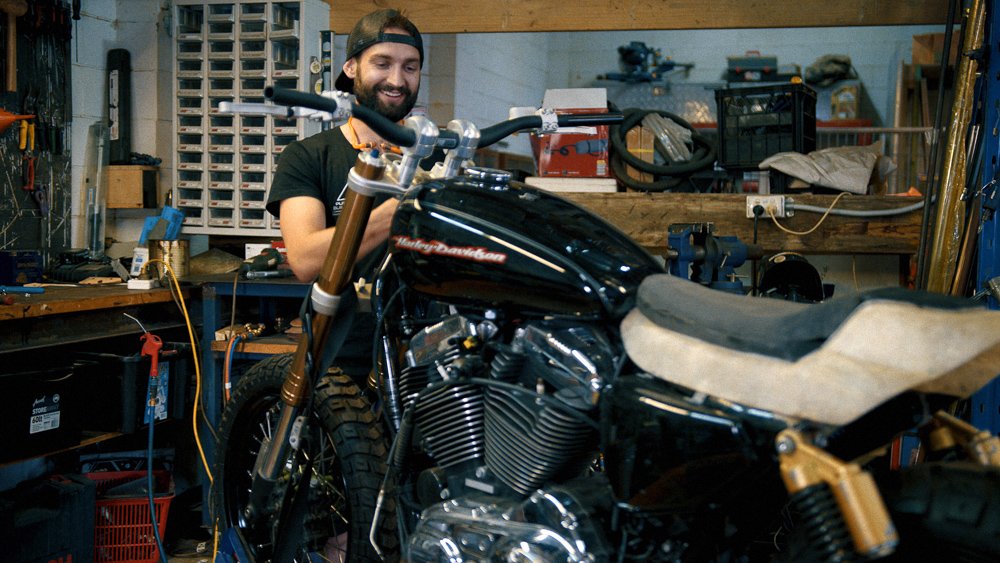 That leaves you with not much more than a frame, swing arm and motor. Perfect.
The rear wheel was stripped, hub painted and re-laced to a 17” x 5.50 aluminium rim wrapped in a heidenau 170 -17 K60 Scout Tyre. Using the stock hub, and alloy rim gives a good weight saving. I also had some 14.5” shocks in the shop that were put on for place savers on the Sportster scrambler while I continued on the fabrication of the front end USD conversion.

The front end I’d chosen for this bike is off a low mileage Triumph Tiger 1200, 2015. A fully adjustable adventure bike front end, with a twin disc brake set up and around 140mm of travel. Absolutely perfect for what I needed. A suspension and braking upgrade in one package.
I also used the Lightweight triumph Tiger basket hub to lace to a 19” x 3.00 rim on the front wearing a Heidenau 120- 19 K60 Scout Tyre. 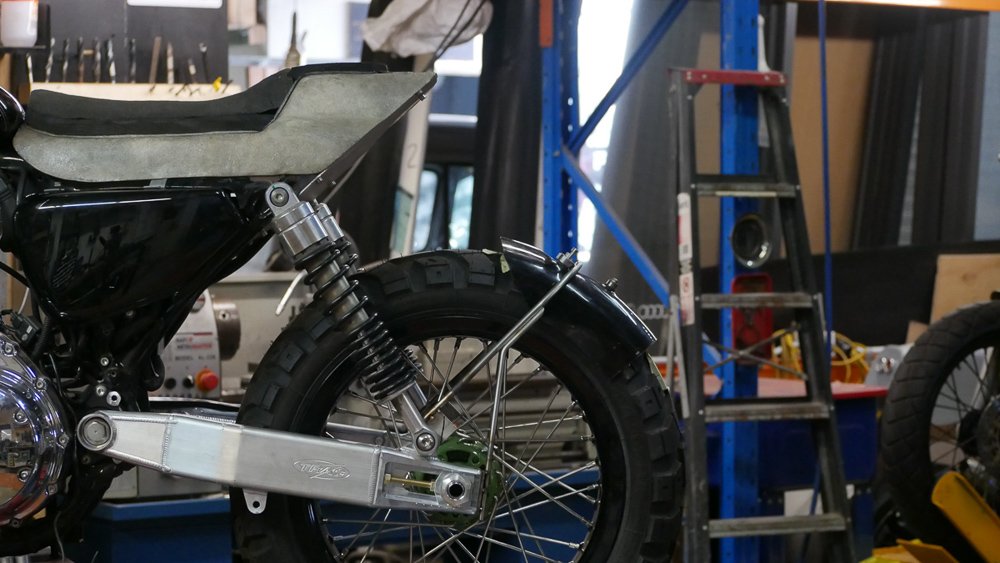 I’ll often see scramblers built with sport bike front end’s, to me that makes little sense. I’m building an adventure scrambler, so the obvious option is an adventure bike front end right? It will give me the ride height I want and the suspension capability I need once valved correctly for the bike. 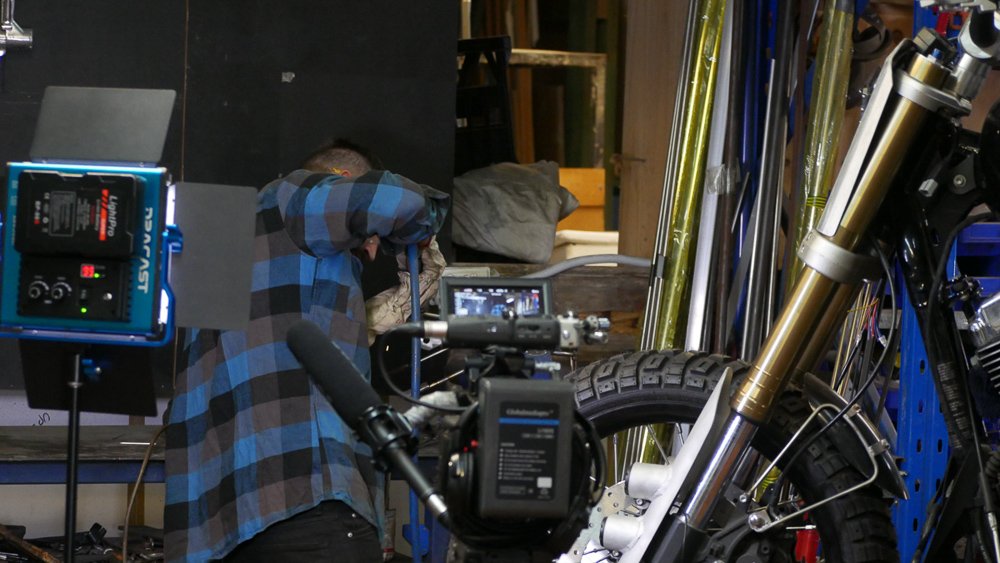 It wasn’t without complication though, the usable area that the triple clamps fix to was a lot wider than the HD sportster head stem. To make the Triumph Tiger front end work, I had to press out the original head stem, and modify the Sportster headstem to fit into the triumph forks. The headstem also had to be extended 40mm to suit.

After that some spacers were turned up and all fitted quite well. These challenges often come up on front end swaps. The important thing I feel is to take it step by step, working with what you cant change, and modifying what you can to make it work. That’s pretty much a summary of my life in the garage. 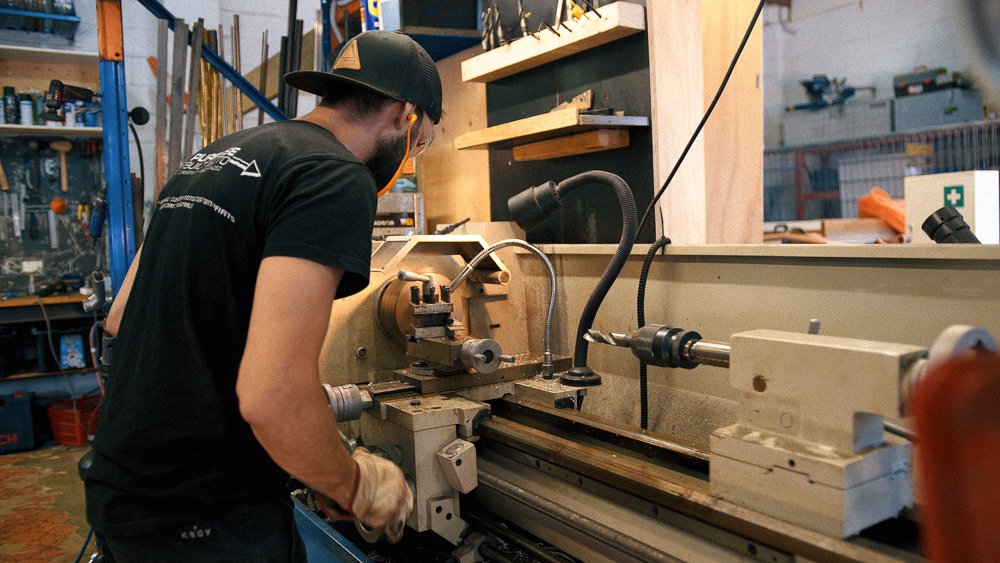 As I mention in the YouTube clip, whenever you’re doing things like this, I always recommend to make a few sketches and jot down measurements. If ever anything goes wrong, or you need to repeat the process this is going to be a lot more reliable than your shotty beer soaked memory. 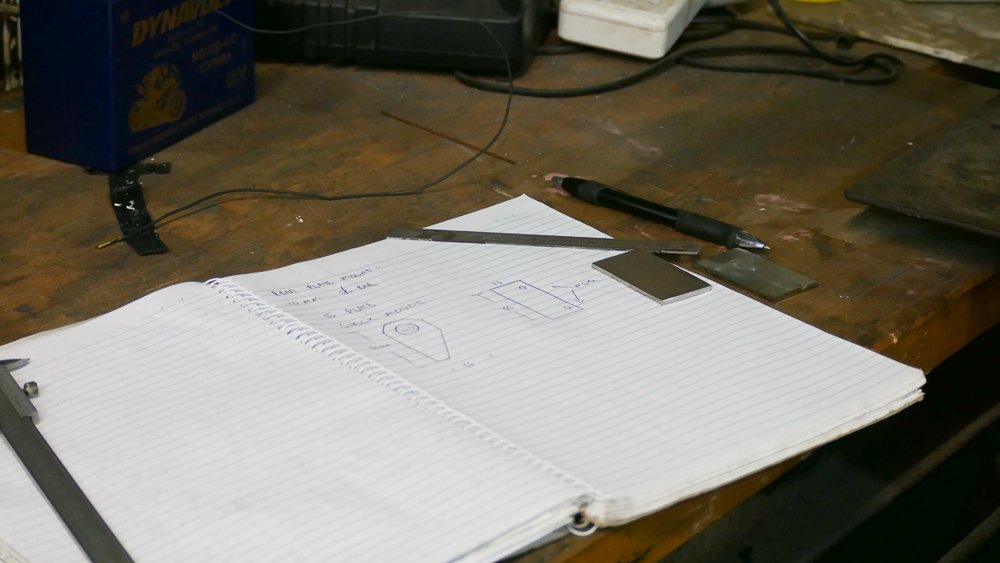 At this point the Handlebar risers went on as well as the bar clamps.
I’ve custom made a set of risers 35mm high that also convert from the triumph Tiger mount into a more universal Harley single bolt bar clamp. I’m using a set of Pro-taper Outlaw tracker bars. 1.5” at the clamp, and supposedly strong as anything! Although I’m yet to put that theory to the test.

Moving onto the tail end, this always helps to get a clear idea on the shape of the overall bike, so it’s often something I’ll do very early on in the build. You can check out our How to build a tail blog here. I slapped a lump of foam seat area, and started shaving away at it. Eventually carving out a shape I was happy with, it’s a sharply styled tracker tail, and with a good bit of height under the seat area to allow a bit of storage. Once the shape was done and about as symmetrical as I could get it, the form was fibre glassed. Popped off trimmed up and I set to work on the mounts. Under the tail there’s a mount point directly behind the tank, one in the center under the seat and one at the very back. This will support the rear of the tail as well as be a fixing point for the baggage rack I’ll build later on. 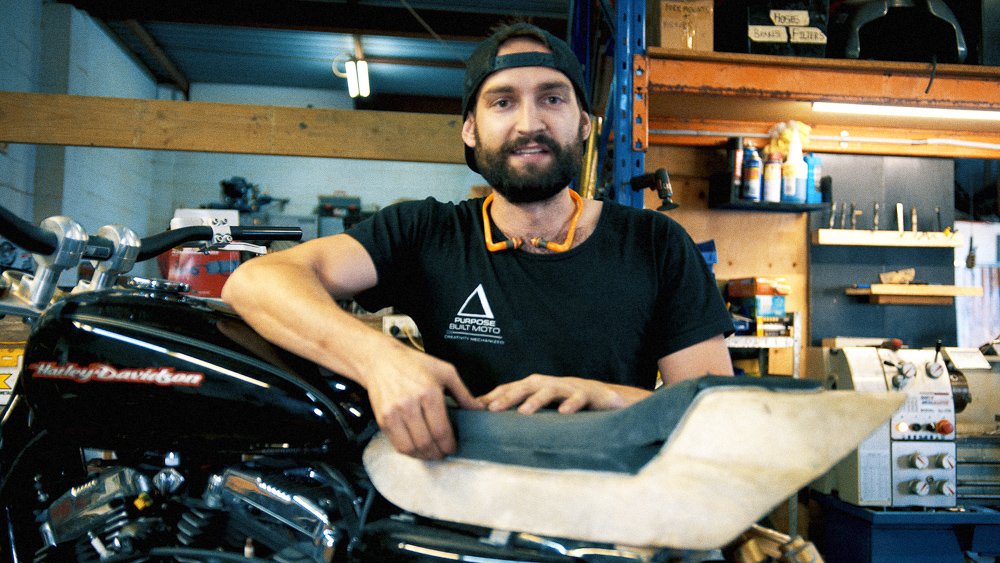 The seat pan was then fabricated to sit over the tail section, this will lift up to reveal a storage area under the tail. A bit of glue and some foam and it was ready to shape. I’ve probably built and shaped well over 100 seats by now, and Jamason has had a hand in a lot of that aswell. That’s taught us a few things including that a slim seat can be comfortable if you layer it right. We use 2 sets of different density foam on our seats. A base layer of mid density foam and a top layer of soft-med density foam. Using these 2 types allows you to have the comfort when you first sit down and the base layer makes sure you’re never sitting directly on the seat pan. Tools used for cutting and shaping are an electric carving knife and a small disc sander with a scotch brite wheel for fine tuning smoothing out.

Right now, we’re looking at the bottom of a very steep mountain that needs climbing. I’m going to do my best at bringing you every gritty detail that goes into creating one of our custom bikes, so will you come along for the ride? 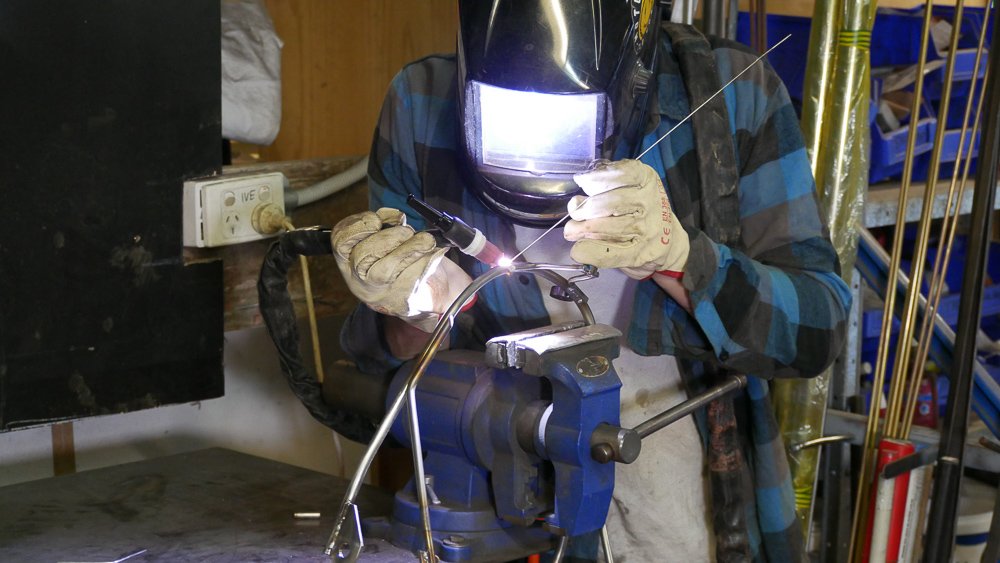 That will wrap up our first installment of the Sportster Scrambler – in the build series.

Make sure you check out the build video here:

There’s a metric shit tonne of work to come on this one and next time we’ll be getting into some heavy fabrication work. Fabricating some MX style fork guards, fitting the shroud and mounting the digital speedometer. Make sure you get and subscribe to out YouTube Channel so you don’t miss a thing!
you can also get on our e-newsletter for updates on everything PBM.