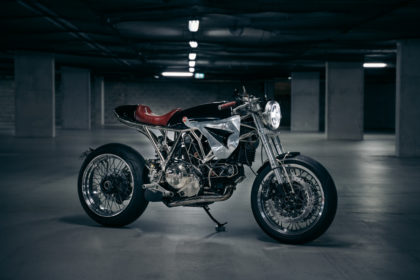 The story of this bike is a long one, not only because of the extensive modification we’ve done to this Ducati GT1000 Café racer but because for a long time, I delayed even starting this build. The bike wasn’t sat in my shop dormant but I held off taking the bike in until I was sure I could deliver on the ideas I had for the Ducati.  In the end we’ve created an extremely unique motorcycle that performs amazingly well. We’ve dropped 25kg off the stock weight with the bike at 175kg ringing wet and delivering 92hp. 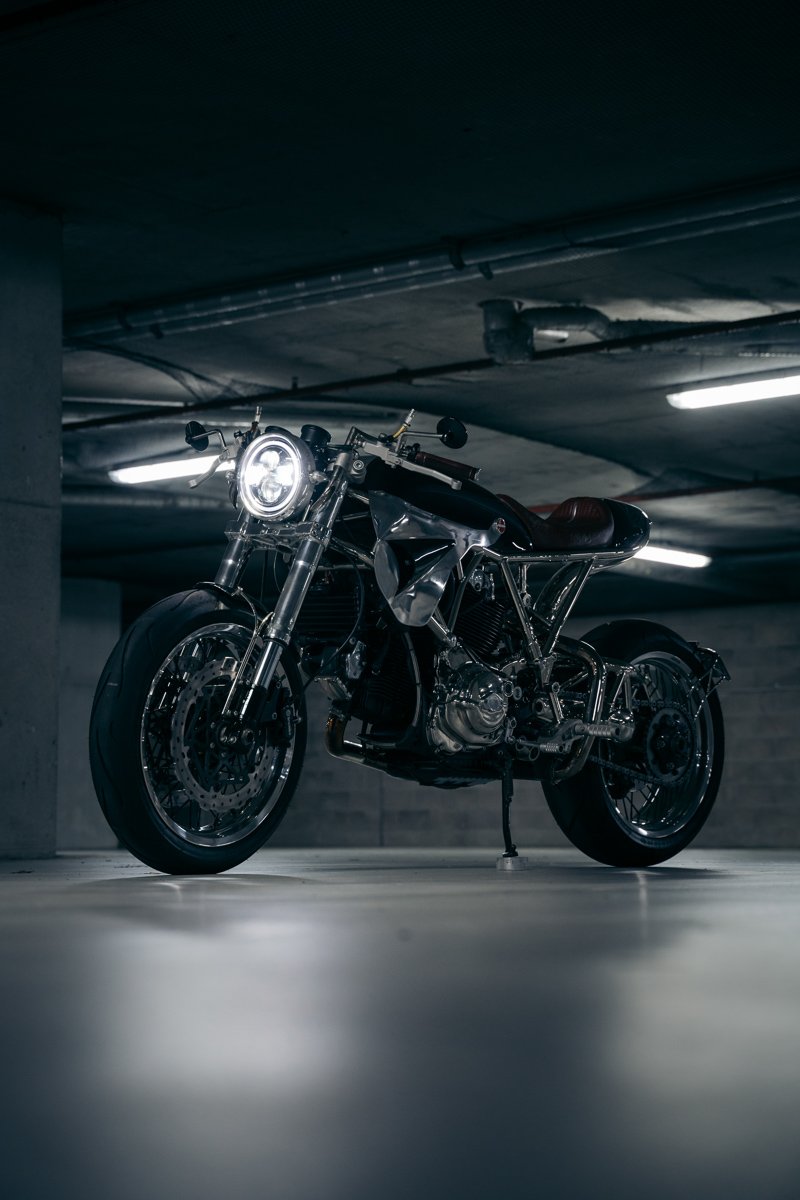 Paolo the owner is a discerning gent, he likes nice things and appreciates objects of beauty. In our early conversations he described his appreciation for both very beautiful classically styled bikes and more brutal modern customs. During these conversations I thought I may be able to seamlessly blend these styles. Whether I pulled it off or not he can decide, but let me walk you through my head space as I designed and executed on this custom Ducati GT1000 racer. I’ll also link the YouTube video with test ride for you to watch at the end. 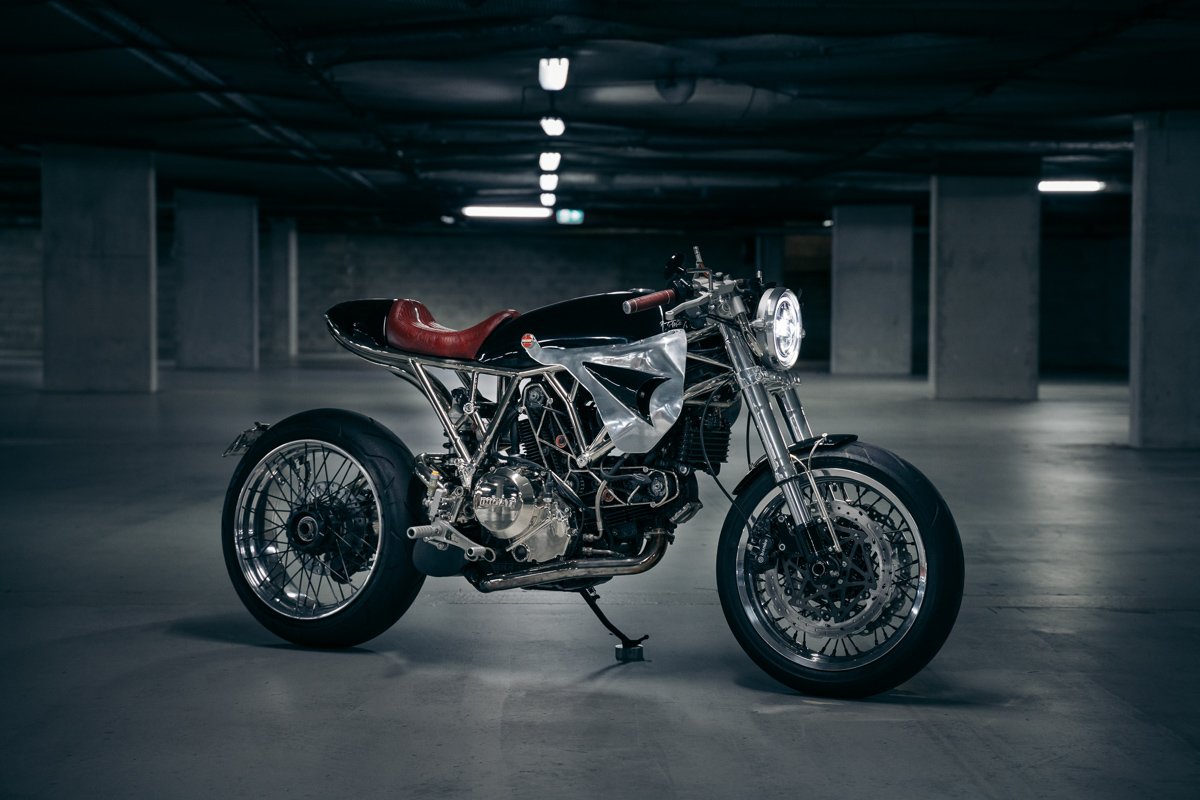 Stripping the bike down to a frame and wheels, something drastic needed to happen to draw people away from labelling this bike a Ducati sport classic. I decided to fit a single sided swing arm, and central mounted monoshock suspension. Using a Ducati Monster S4R swingarm, the shock and linkage was fabricated to fit inside the GT1000 frame. Using a true to form frame trellis design that ties the modification seamlessly to the bike. The crown jewel on the swing arm comes in the form of a Jonich 40 spoke rear wheel. Black spokes, black hub, and a polished rim. 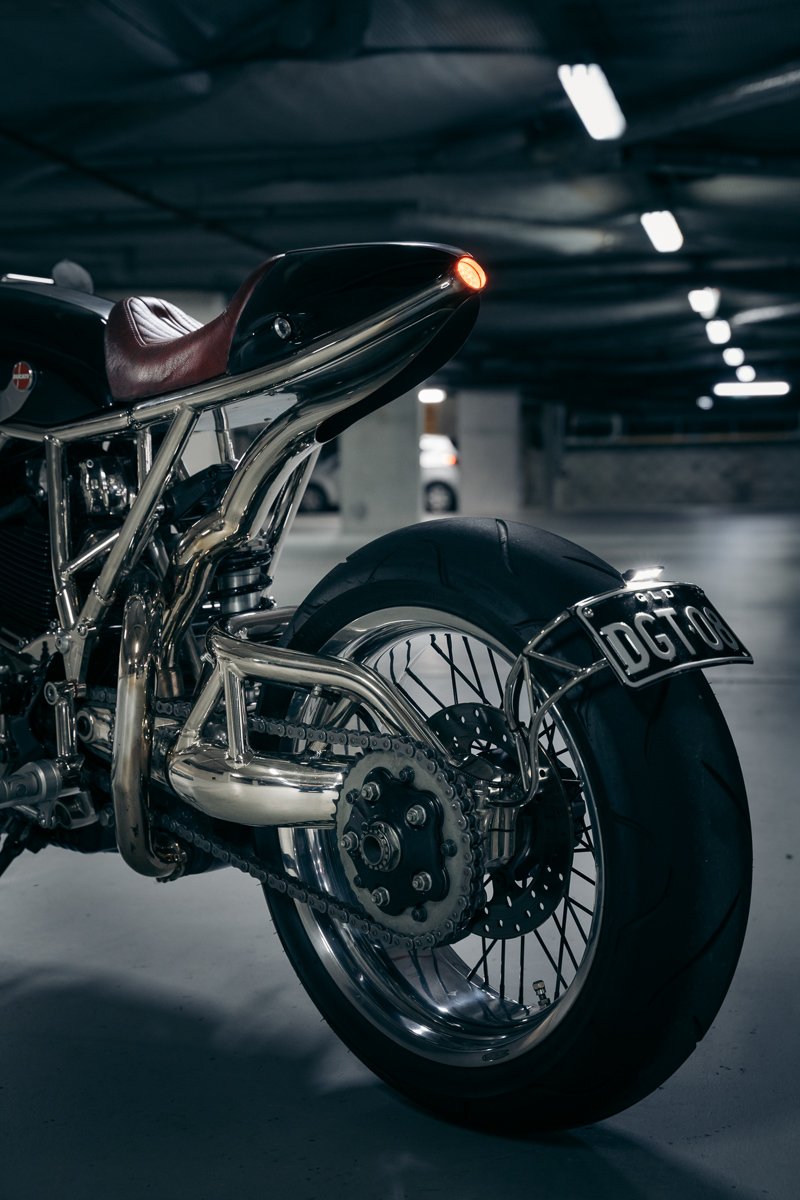 A fun piece to fabricate on this bike was the rear plate mount. Using the pinch bolts on the swing arm I shaped a sweeping trellised plate mount that hugs around the rear tyre. Making a number plate mount that is usually a hidden after thought a real stand out detail on the Ducati café racer.

The structural subframe of the dual shock Ducati GT1000 was no longer needed. Taking some chromoly and sand bending some sweeping bends, I was able to fabricate an integrated tail light in the new slimline subframe. This tail was to set the bar for the rest of the bike. In that I would try to slim this bike out as much as possible, making it a dream to grip on tight with your knees and shoot it through some traversing corners.

Next on the list was working out how I was going to remove the airbox, not limit the air flow and allow enough room to build the custom aluminium tank. Slapping a set of 40mm pod filters tends to choke these high revving twins, so the solution was for me to machine a set of velocity stacks for the EFI system that would allow the Ducati to breathe easy through a set of larger 75mm DNA pod filters with a far larger surface area. 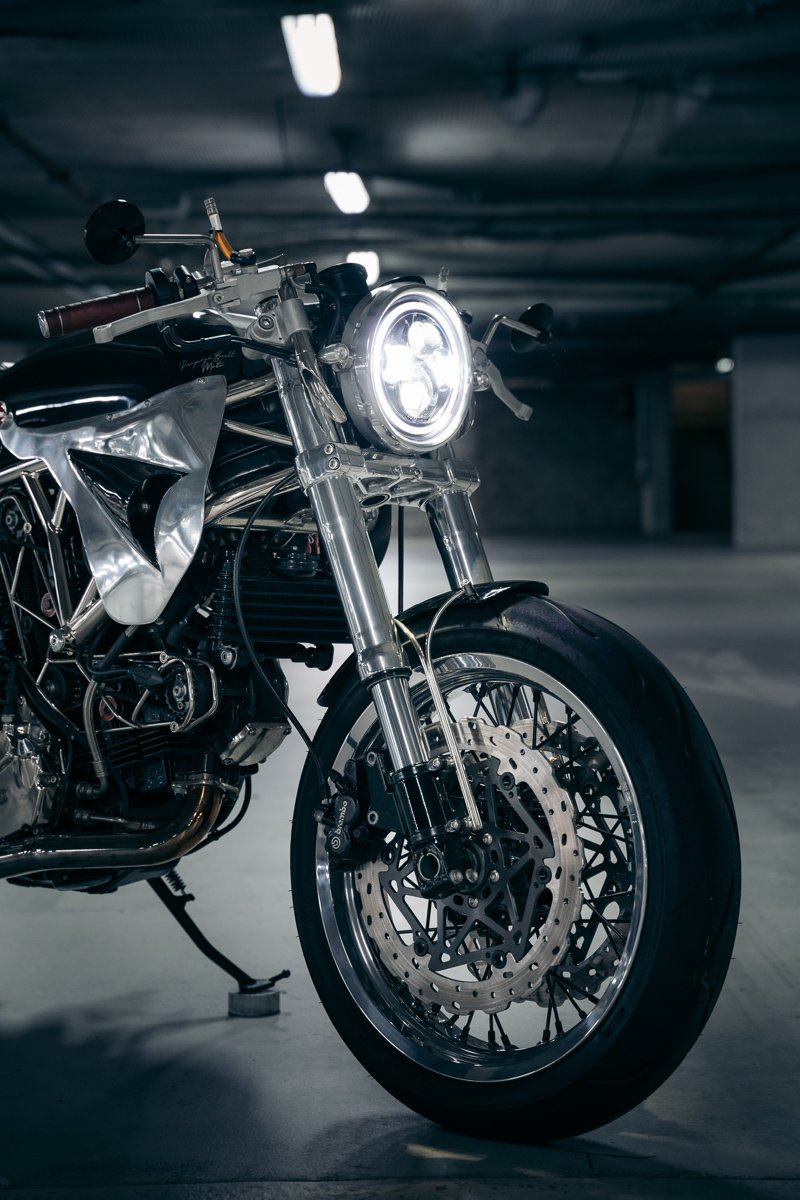 With that done I set about patterning in cardboard the first aluminium gas tank I would ever make for a bike. The tank was to sit inside the frame rails, taking up the room left over from the airbox removal and being shrouded in some fibreglass side covers that would hide wiring and electronics on the front of the bike. The tank is rubber mounted from the bottom and has the fuel pump located in the front over the forward cylinder.

Working with the newly finished tank, I shaped up a tail cowl that would mirror the style. An aluminium strip running over the centre and gloss black panels on the side. Meeting at a central point over the orbit brake light. Integrated into the tail is a set of chrome hollowtip turn signals. 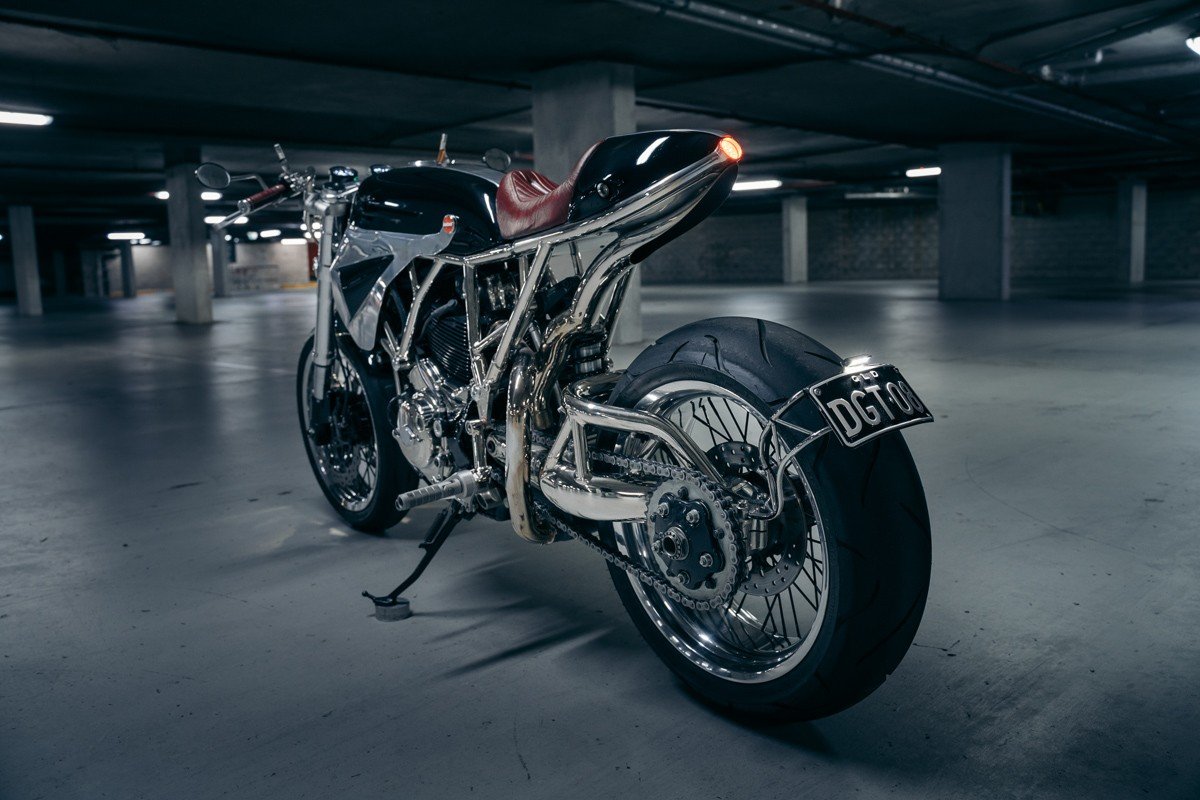 As the Ducati GT1000 sat it was slim, sharp and exciting to cast an eye over, but the brutal element was lacking a little, it just looked like a nice café racer. The Ducati frame is slightly Vee’d where the tank stops and the seat starts, this up-hill frame rail on the front removed any sense of speed sitting still.

with the sharp up-turned tail the ducati needed something to carry your eye from the tip of the tail all the way forward on the bike. I started cutting out mock up sheets to land on a design for some side shrouds. Something that would add a little weight to the front end give a bit more depth to the idea. The side shrouds were hand beaten from aluminium and an air scoop added on each side. Finishing abruptly on the side of the tank with a set of 1 off ducati badges I designed and had made. 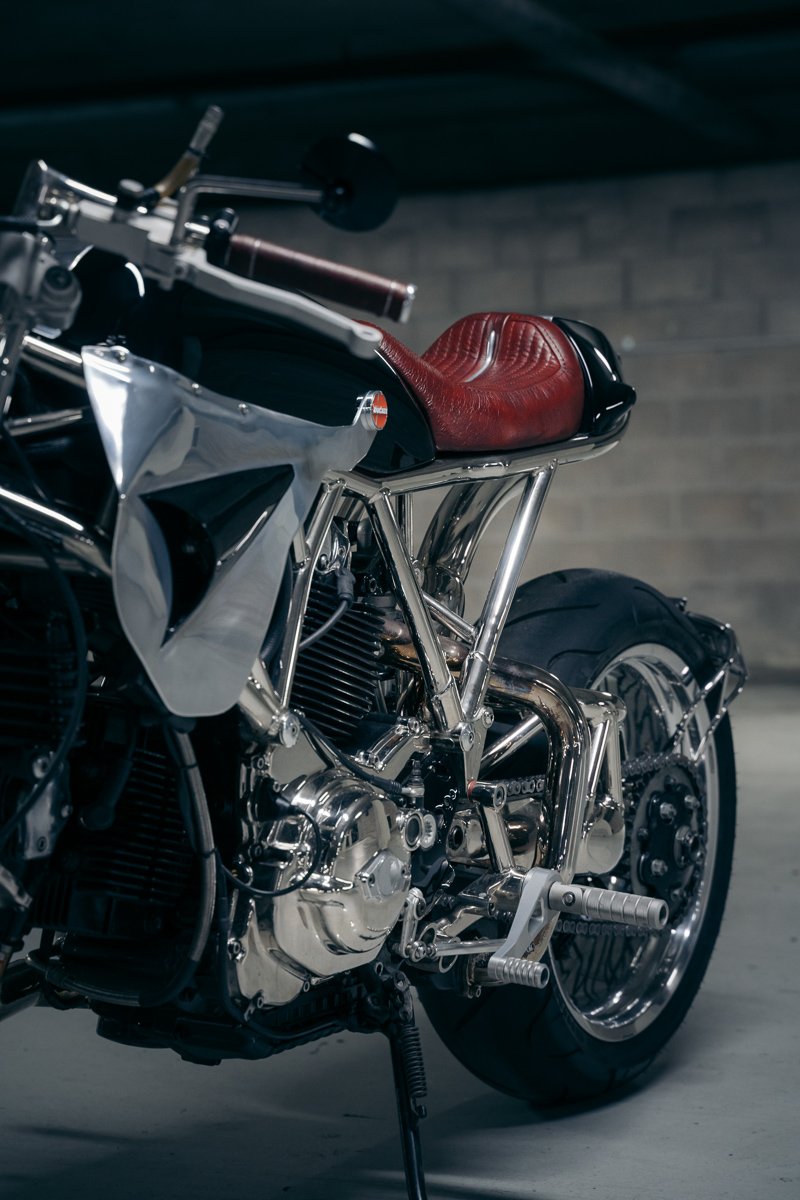 The purpose of these shrouds was to carry your eye from the point of the tail through the front of the bike. modern super sports do this extremely well, and this was my hand made, garage built way of putting the PBM spin on that. Again attempting to walk the line between classic styling and a modern café fighter edge. You can see what I’m talking about with this photo of the 2019 Ducati v4R. 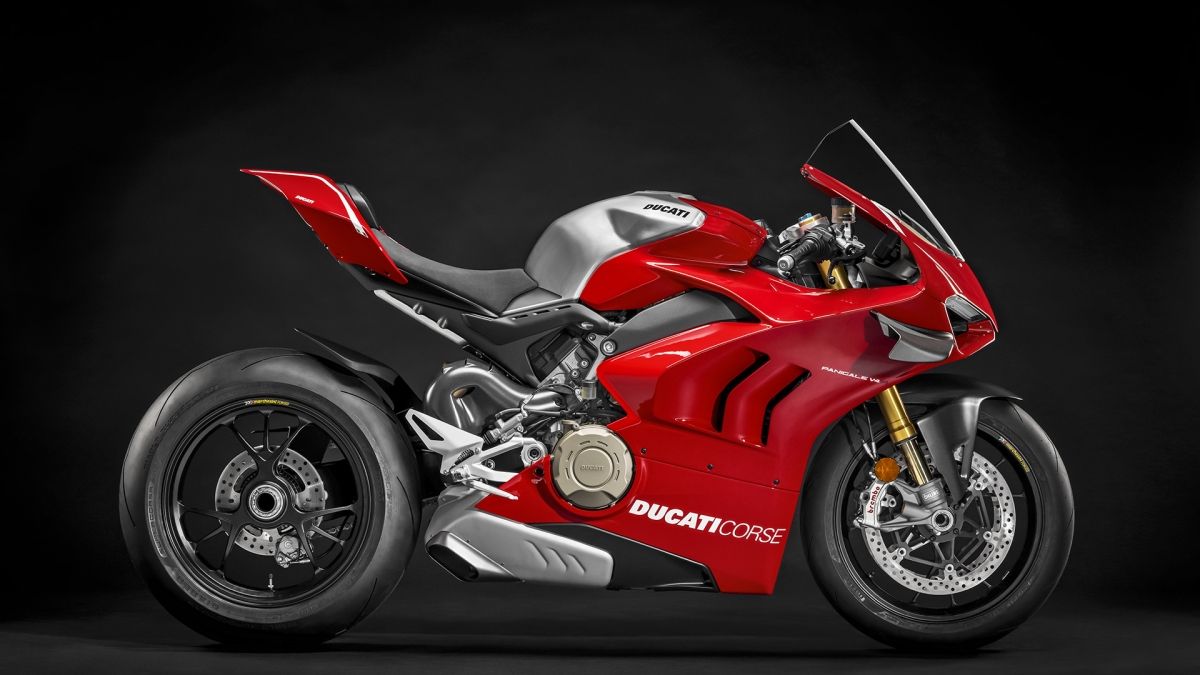 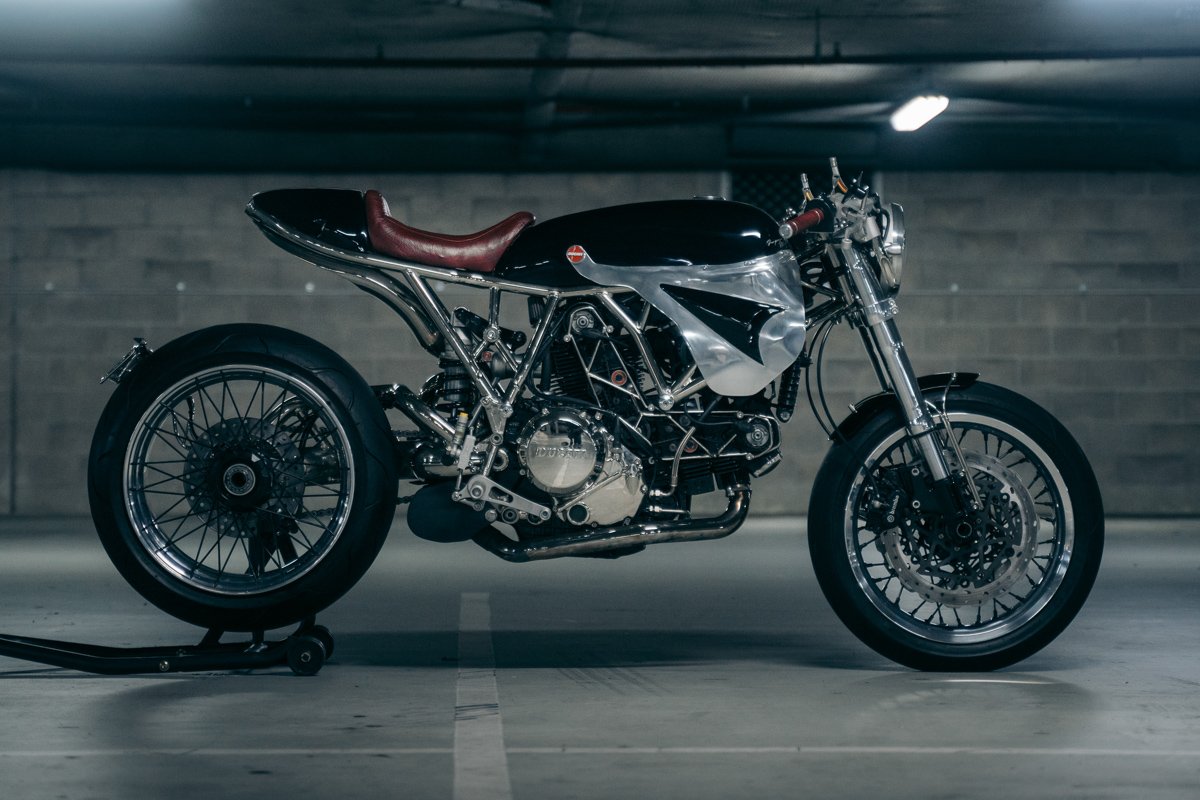 With my silhouette completed, we shaped the seat, and began on the front end. The forks were stripped, rebuilt and polished, with a set of upgraded rotors dressing up the aluminium front rim. 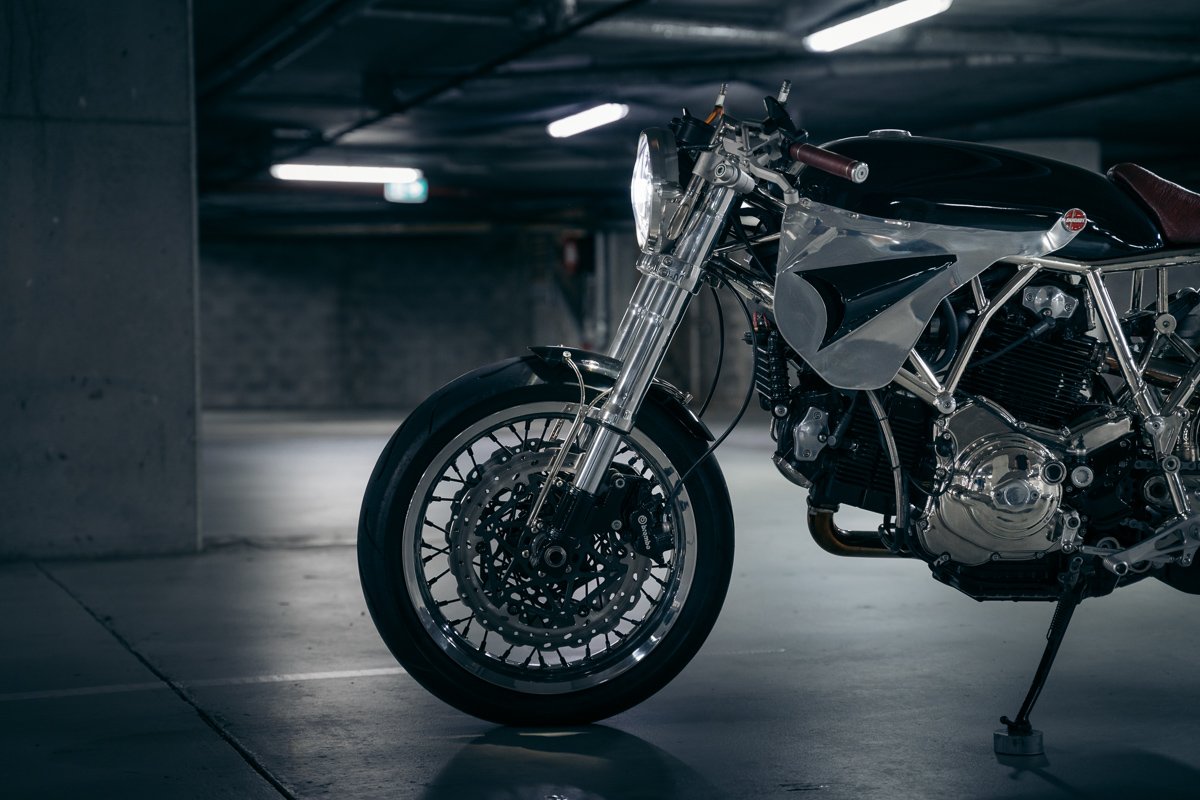 The exhaust design was a very early idea and something I knew had to be a real stand out. Using clever design to hide a muffler box under the swing arm allowed the stainless 2-1 system to finish by snaking up through the swing arm and sweeping its way out under the tail. Matching perfectly to the lines of the rear subframe. You’ll hear in our YouTube build video the lumpy and snarling note the Ducati puts out. Just adding another element of enjoyment to the ride. 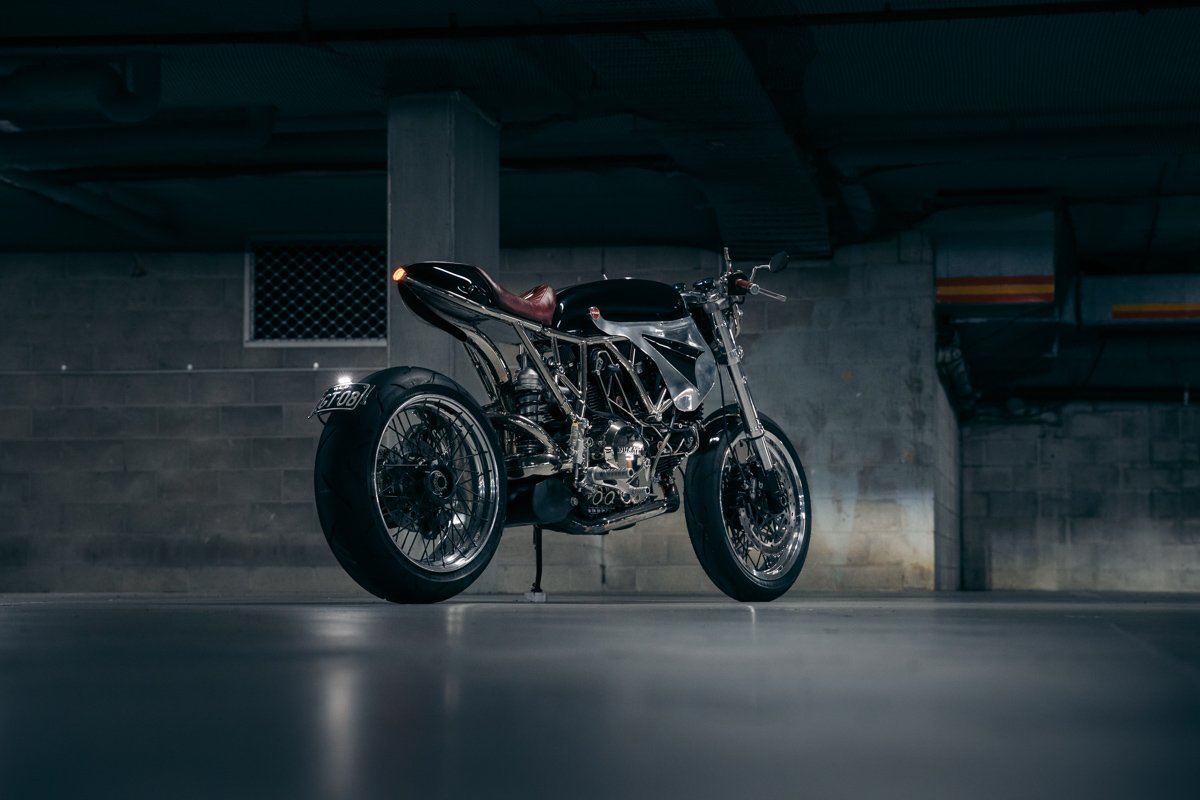 Removing the stock headlight, and riser bars a set of modified tarozzi clip ons were used that allow the rider to adjust the bars up and down 70mm depending on what fits him best.

Having these bars set to be adjustable left us with an issue of the bar end being visible behind the headlight. That meant we got creative with some bar end caps. A few slash cut sections of tube were heated and bent up and fixed to the bottom of the bars. They follow the contour of the 7” headlight and provide a nice touch of detail on a very minimal front end. 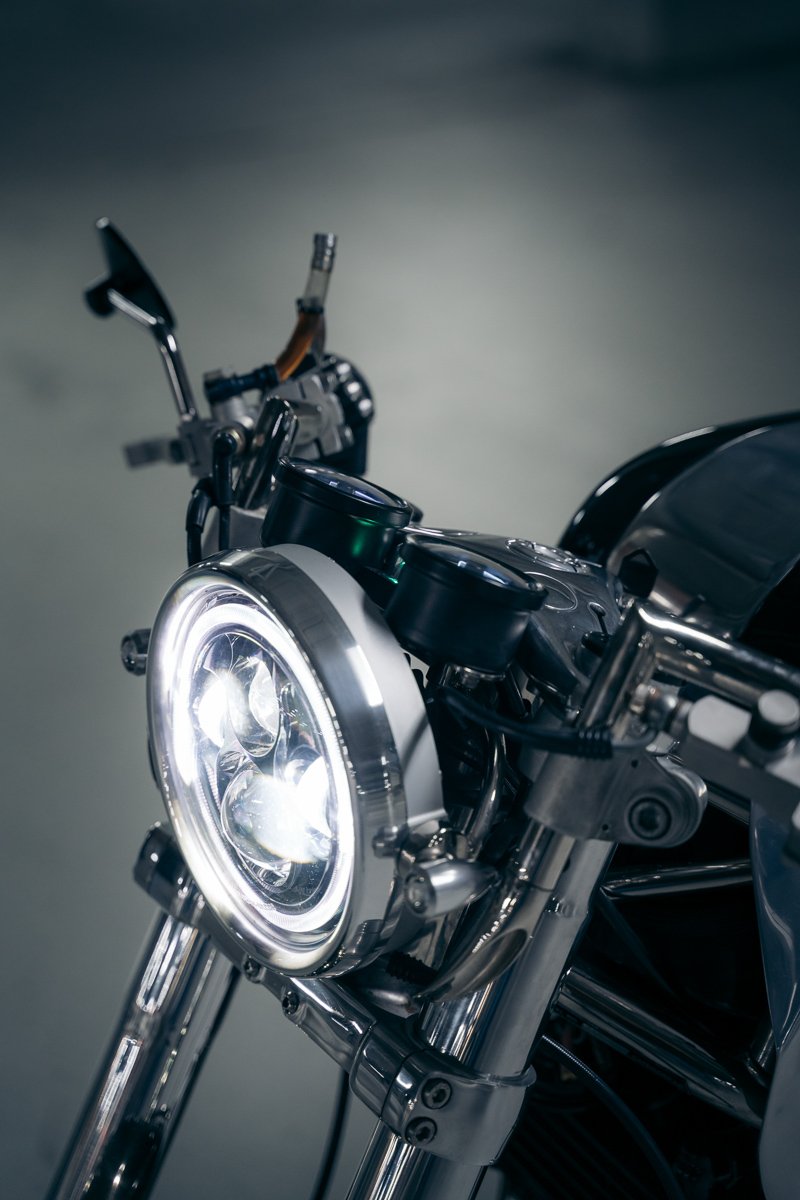 The front fender uses our new Aluminium fender blank and a set of fabrication slugs. Lovingly massaged into a 3 point mounting bracket that speaks to the sharp tail on the GT1000. Nickel plated brackets on a Gloss black fender, it doesn’t get much better than that.

Accessories up front are a 7” flashpoint classic, hollowtip turn signals used as headlight mounts and a pair of velona gauges all mounted on a single stainless bar work bracket that fastens under the top triple clamp.

With the standard riser bars removed it left the bar mount holes exposed. The factory top clamp on these bikes are a great looking piece so the solution was to turn a few blanks for the holes, fasten them in place and sand/polish them in situ, this made the finish almost seamless and we were able to maintain the rolling shape of the top clamp. 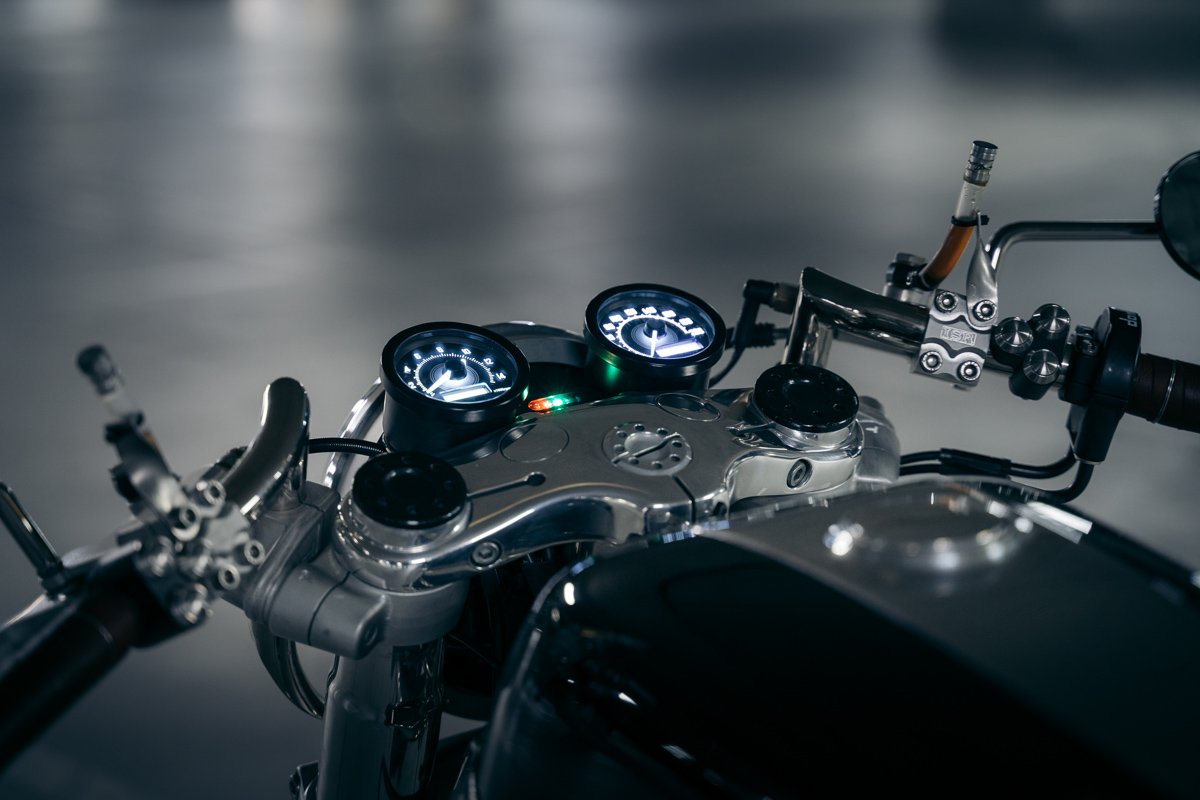 At this stage the bike was completely stripped, sent for nickel plating, paint and the engine went for a ground up rebuild at Cube Performance. Receiving a set of high comp pistons, performance cams and a new performance clutch.

When we started receiving parts back I could see the sea of ideas finally tying into a conducive design. The engine was given a thorough clean and a coat of gloss black. Detailed with nickel plated cases and cam covers then slotted into the freshly nickel plated frame. Adding a custom timing belt guard fabricated from stainless round bar to dress the bike up a little. Because it wasn’t quite shiny enough.

The final piece to fall into place in terms of aesthetics was the seat, mid way on the build I decided on a shiraz red seat, and wanted to include a polished aluminium insert to carry the top line of the bike. Timeless Autotrim and myself worked the design out, and a way to fix the polished insert in and he set out stitching up the cherry on top of this entire build. 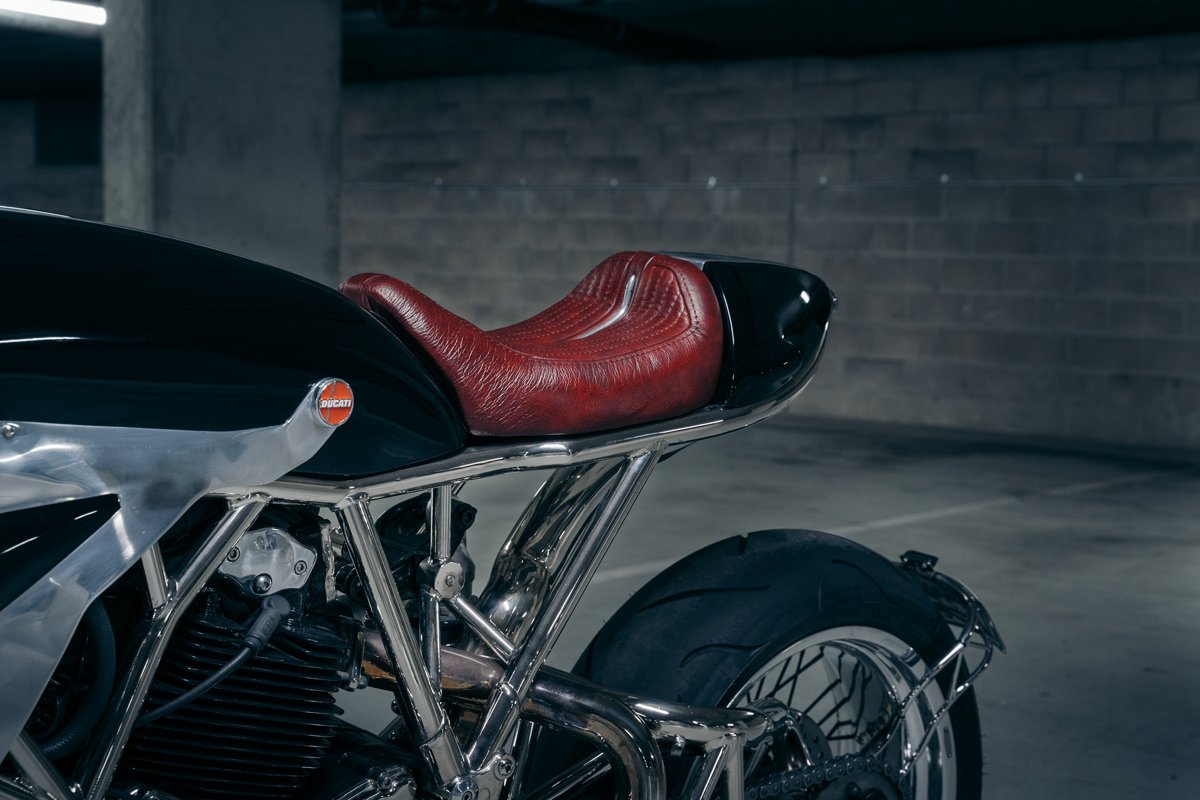 The following weeks saw countless hours spent assembling, polishing and getting the Ducati ECU to work with the new PBM push button control system and Black Box module. I was nervous at first key turn but with the testing completed the key turned, I had everything functioning and there was spark! Cube Ducati completed the run in and tune on the fresh motor and I headed for a test ride.

The Ducati GT1000 café racer ended up being 175kg, with fluids and fuel. I’ve built SR400’s that weigh more than that. So you can imagine the ultimate throttle response and sharp handling this bike provides with custom suspension. The Ducati GT1000 is an experience to ride. Never have I felt so at home on a motorcycle so quickly.

The seat, although slim comfortably cradles the rider and inspires confidence to rip that throttle open and tip it through some tight corners. Lightened Jonich wheels have the Ducati switching from peg to peg with minimal effort and the slimmed body of the 1000cc twin allows you to squeeze in tight and enjoy every moment in the saddle. 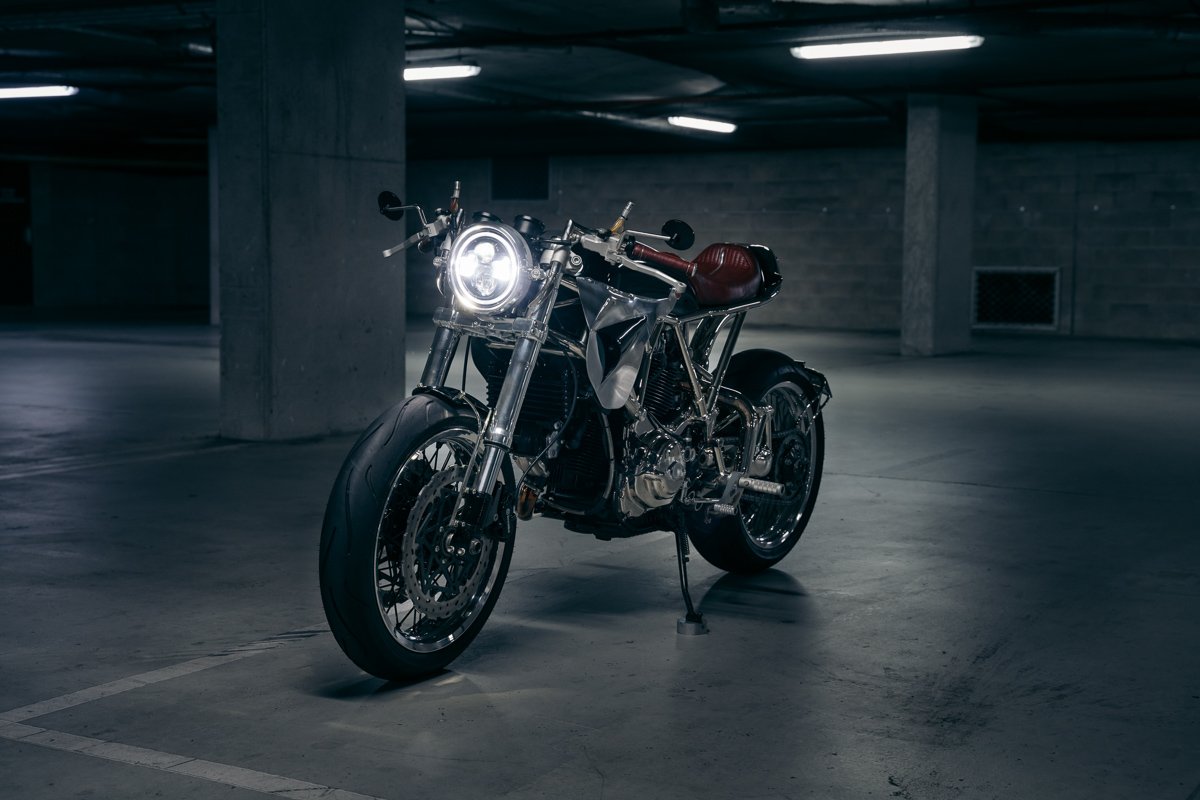 The Ducati GT1000 looks like it should be stuffed in a gallery somewhere, but it begs to be enjoyed. I can’t thank Paolo enough for sticking with us through the extensive build time and I wish him 1000’s of kilometres of pure adrenaline fuelled enjoyment on this bike. I hope he can enjoy it as much as I have building it.

What you can read next 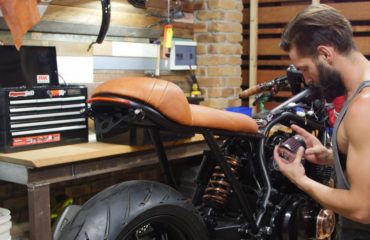 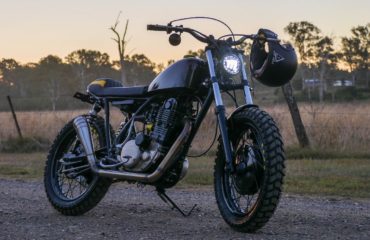 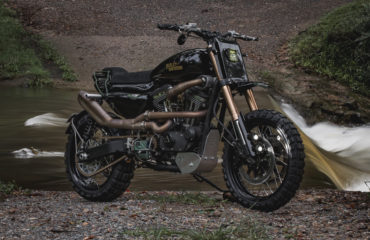