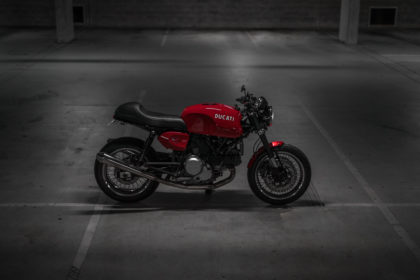 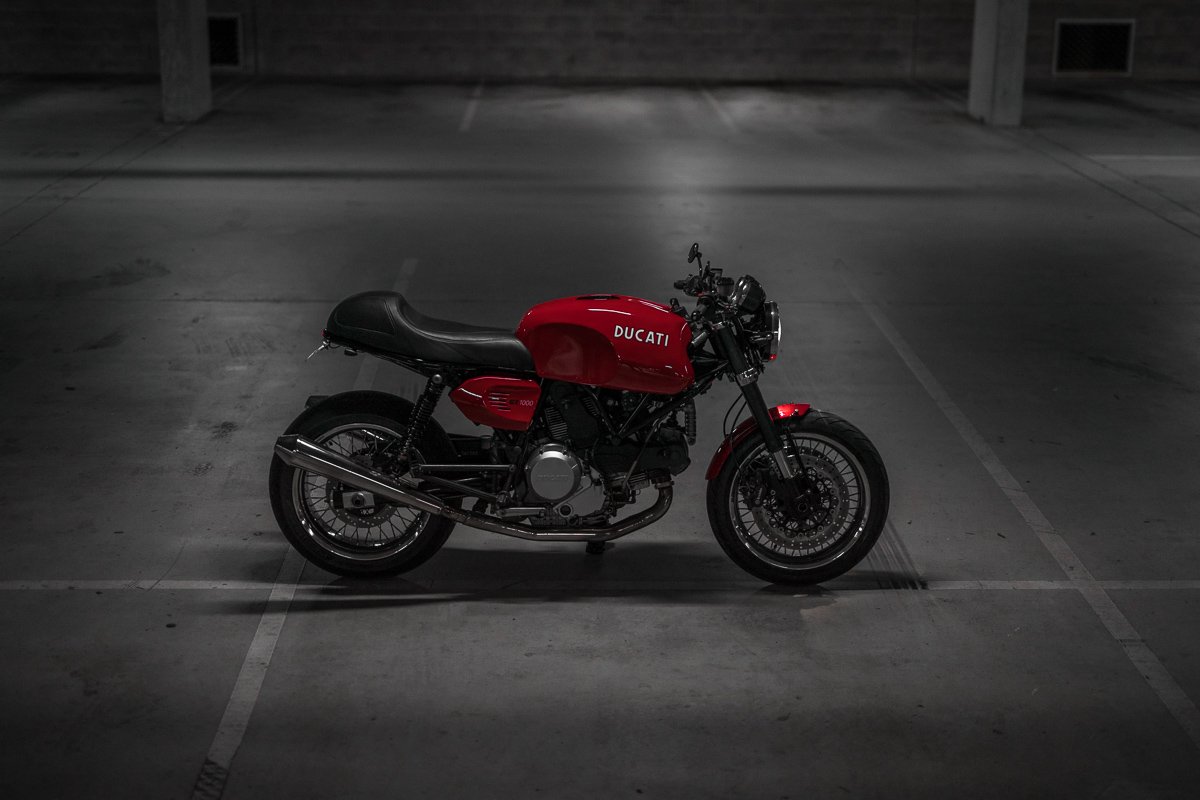 The GT1000 was released before its time, had it been a few years later the market would have lapped up these beefy 1000cc modern classics. But they didn’t, and Ducati stopped making them which means some models are getting to be in high demand.

Some of us we’re however, ahead of the curve so to speak and pounced on the Ducati GT1000’s when they came out. Those guys have now put some good miles on their bikes and are starting to grow a little tired of the cumbersome tails and less than exciting handling. That’s where Purpose Built Moto comes in. 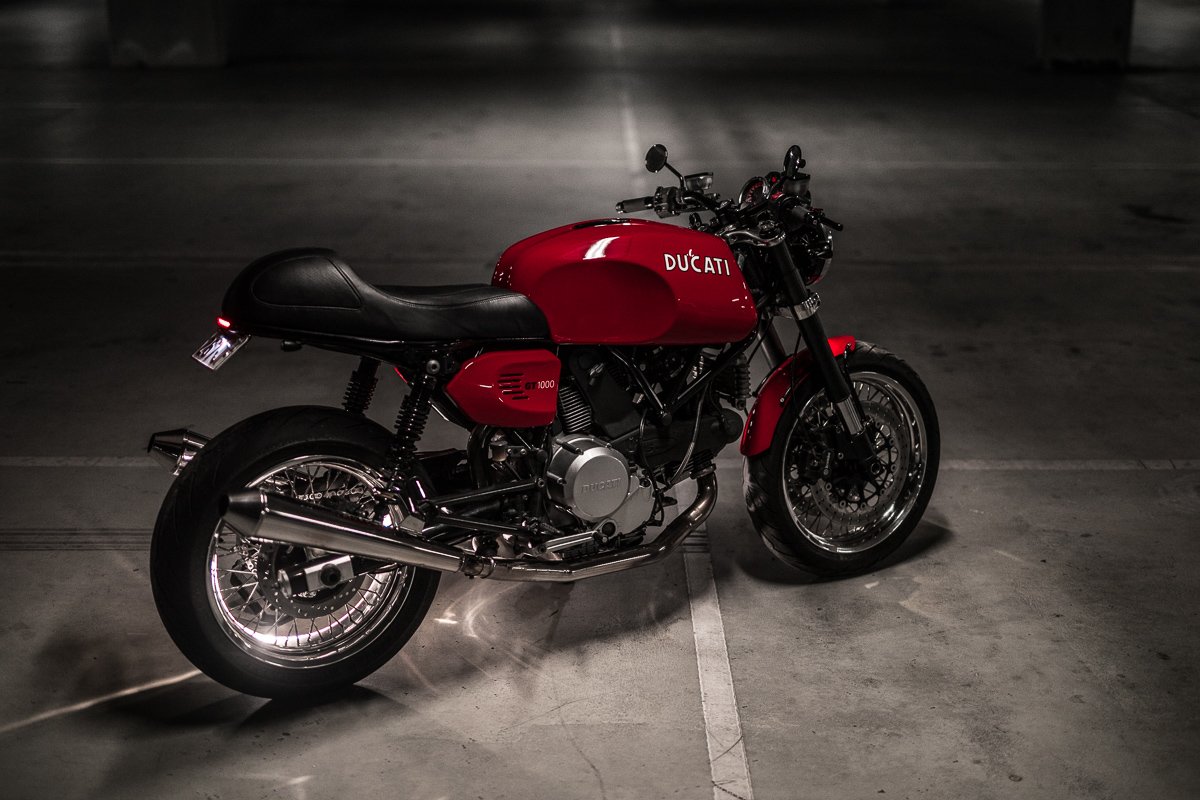 I’ve worked on a few of these bikes before, doing minor upgrades and re-styling work. However this Ducati that was rolled into the shop on its 50,000 Km birthday needed a little more than just a touch up. So as we always do in my Gold Coast Workshop, I went deep. Chopping, changing and streamlining this ducat GT1000 café racer into a sleek, well proportioned street bike that is still quintessentially a Ducati Sport Classic. 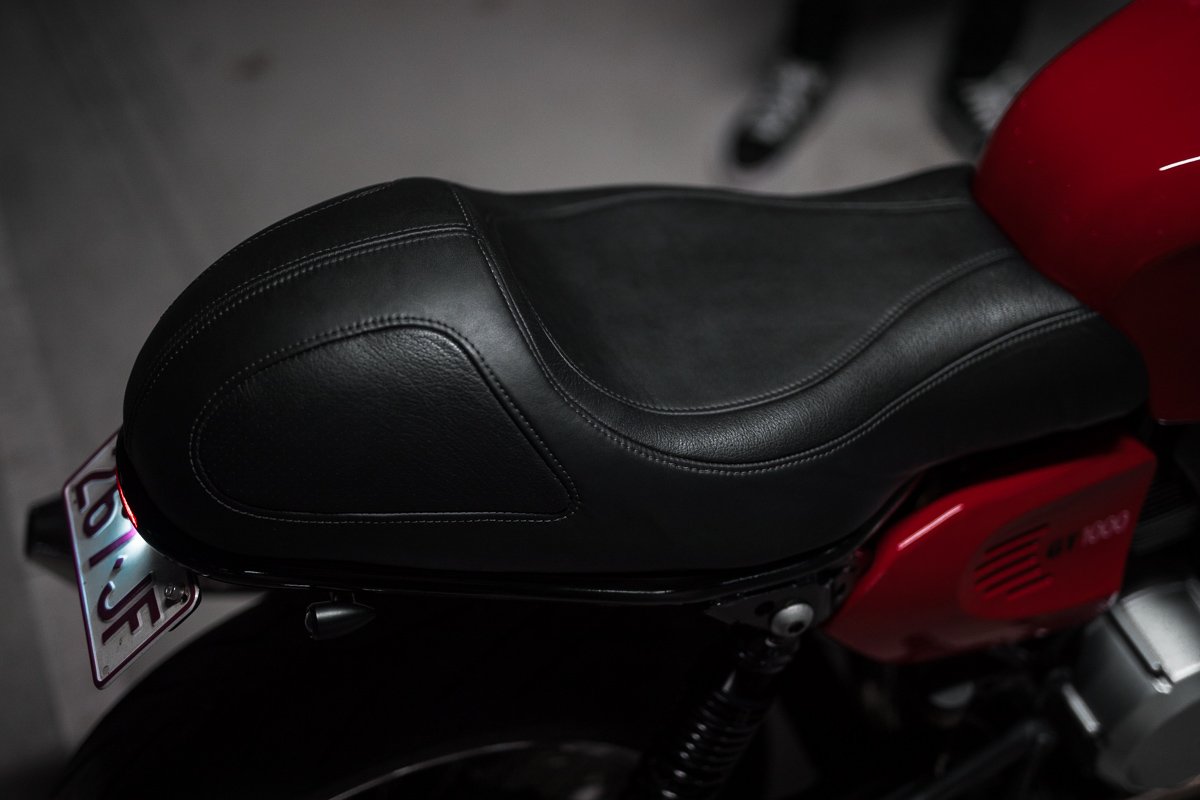 It started with a seat. We offer an “off the shelf” hand made seat for the Ducati Sport classic. The owner found PBM through that and as they often do, the job turned from a simple seat upgrade into a top to tail facelift on this Italian Beauty. I set the seat out and drafted a design, then our in house Upholsterer Jamason – Timeless Autotrim waved his magic needle at it and turned out a Black leather masterpiece, accented with perforated leather.  To completely tidy the tail, an LED strip brake light was recessed into the GT1000 frame, The rear also received a hand made tail tidy, and a set of Hollowtip LED indicators. 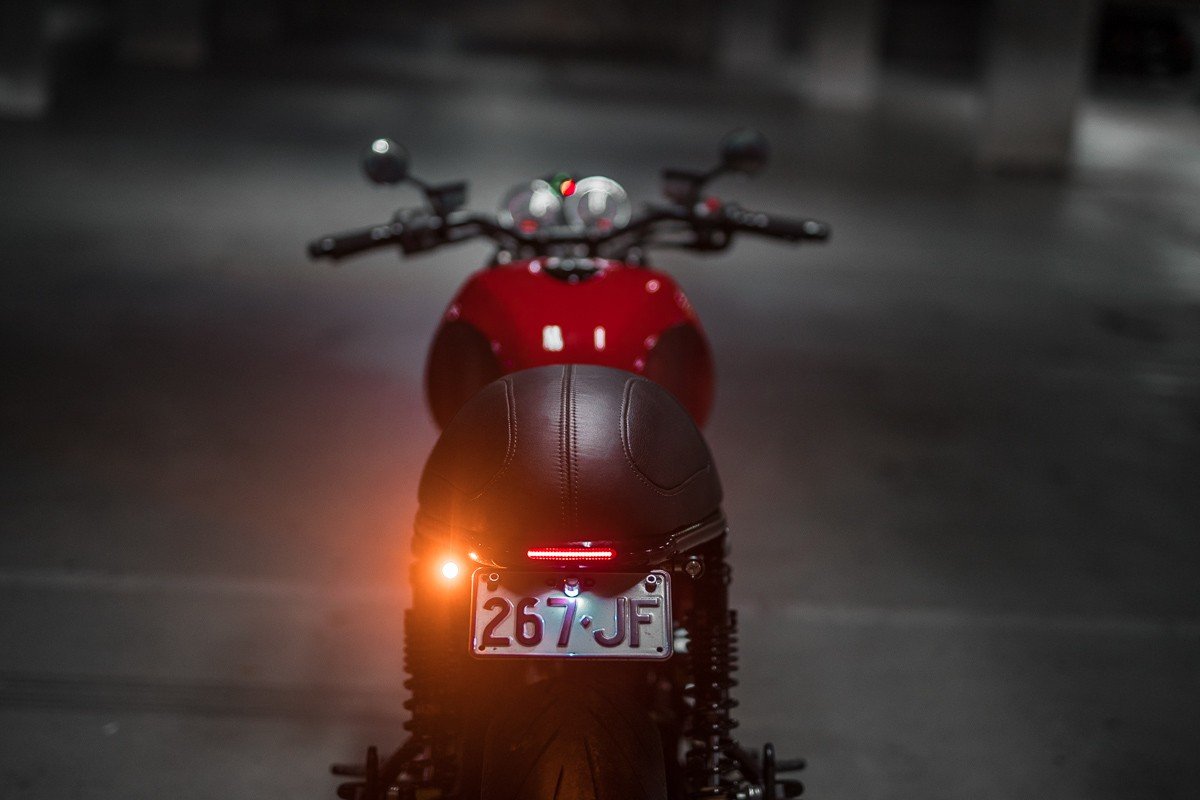 Having 50,000 k’s on a bike will always show a bit of wear and tear. The tank had been scratched and needed attention and the owner James was under the impression that the colour needed to change. But there’s something undeniably natural about a red Italian machine, so with my powers of persuasion and a refusal to do anything else, the bike was to stay red. The panels of the Ducati Sport Classic received a full re-spray in line with the factory design. overall colour scheme would be sharpened with some select parts blacked out, and the use of high polish over a dull brush finish. 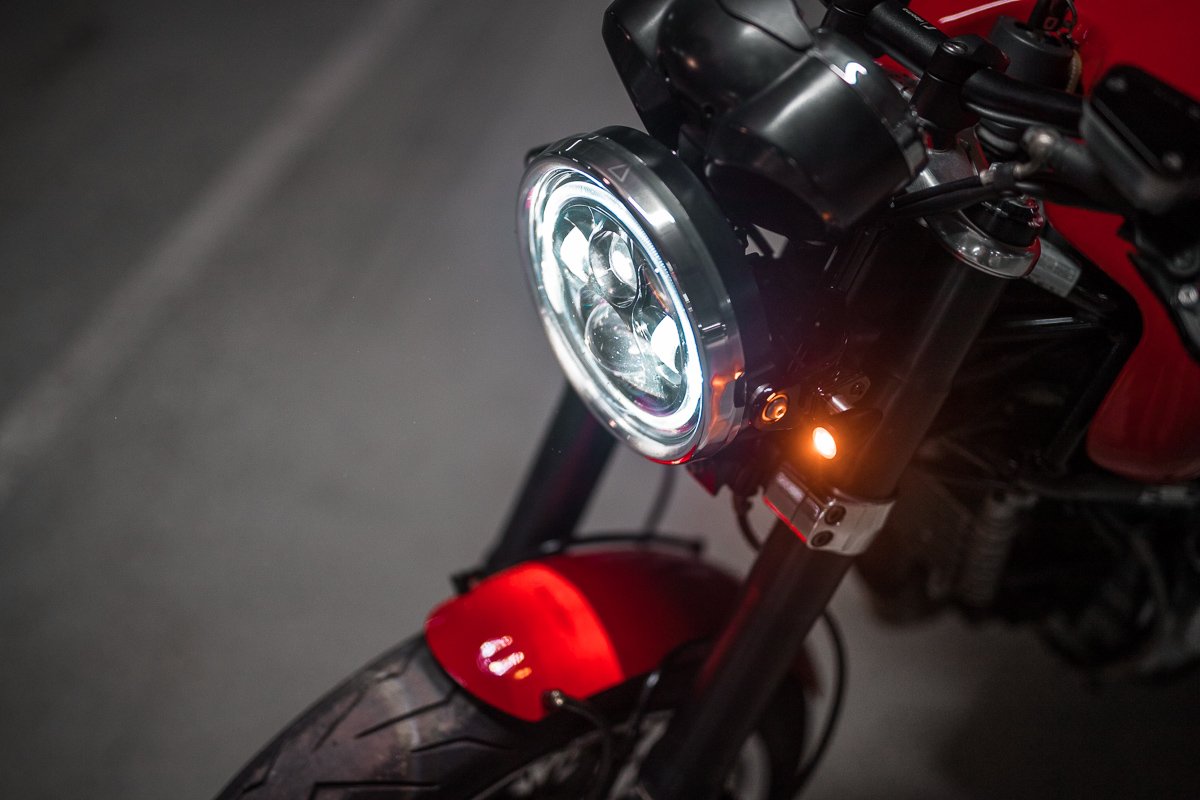 On the front end the lighting was completely replaced with the Purpose Built Moto product range. Receiving a 7” Flashpoint classic finished to a high polish, and a set of the LED turn signals all mounted on the factory brackets that were cleaned up and blacked out. The Front fender was fabricated and included some minimal Round bar mounts utilising the M5 Countersunk bungs. The brackets are hand made in house and shaped to follow the aluminium front fender. 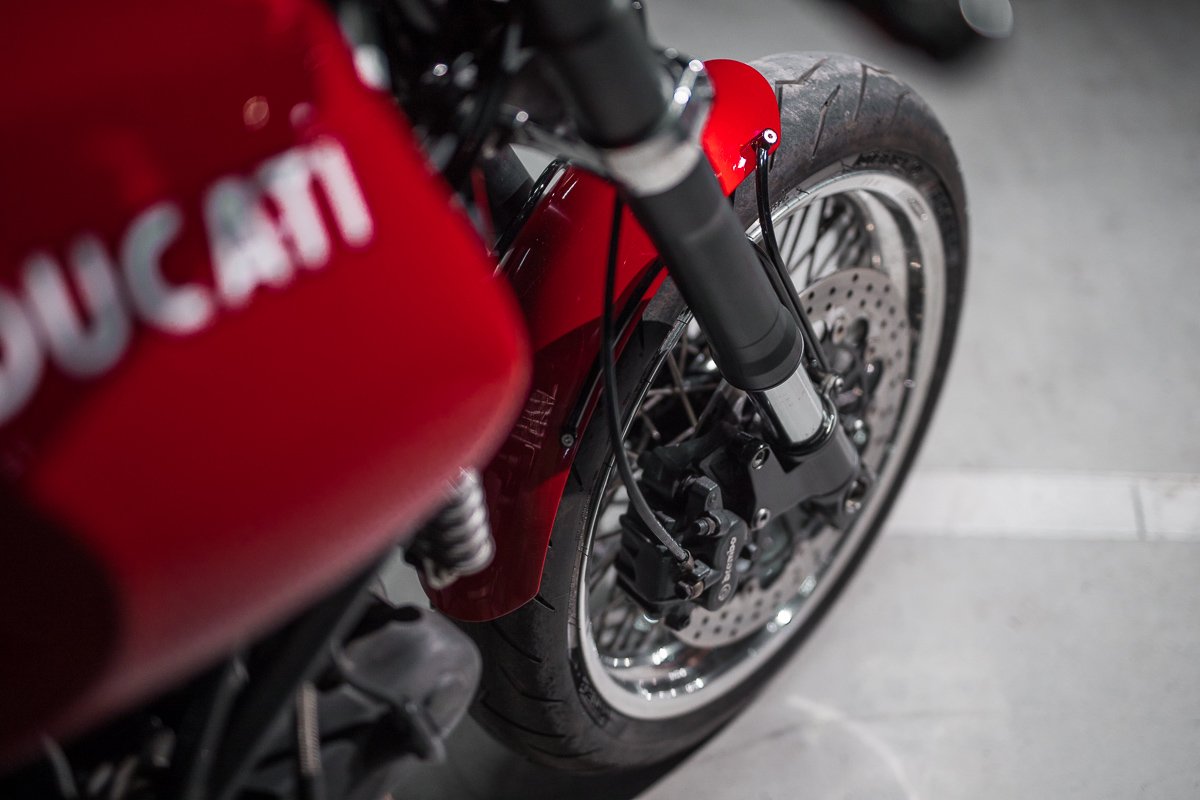 The use of the Slim Purpose Built Moto LED headlight allowed for the stock gauges to be lowered 25mm, this is always a point of friction for most GT1000 owners, where due to the electronics system the bulky factory gauges are difficult to swap out. This solution however draws the eye away from the large gauges by tucking them down a little further and having them sit more in line with the bikes natural curve over the tank. 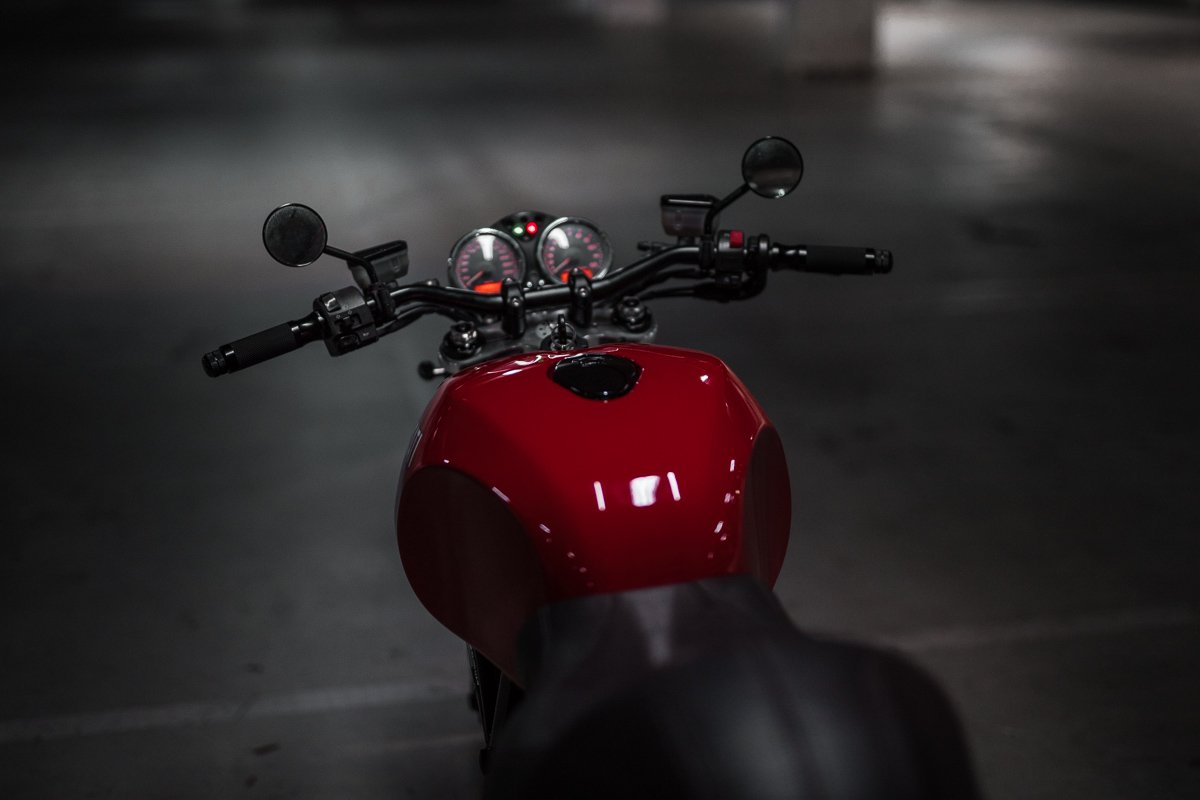 The bars and levers have also been replaced, lowering the riders hands and delivering a sportier riding position that begs to be tested through twisty corners. The new seat shaped and upholstered in house also lowers the rider position further into the bike.

The engine had been recently gone over, however as it came to me the suspension was a little sad. The rear shocks have been swapped out for some incredible k-tech Razor shocks. The front forks were stripped, anodised and rebuilt with fully adjustable cartridges. The suspension work done on the Ducati has really livened up the handling. 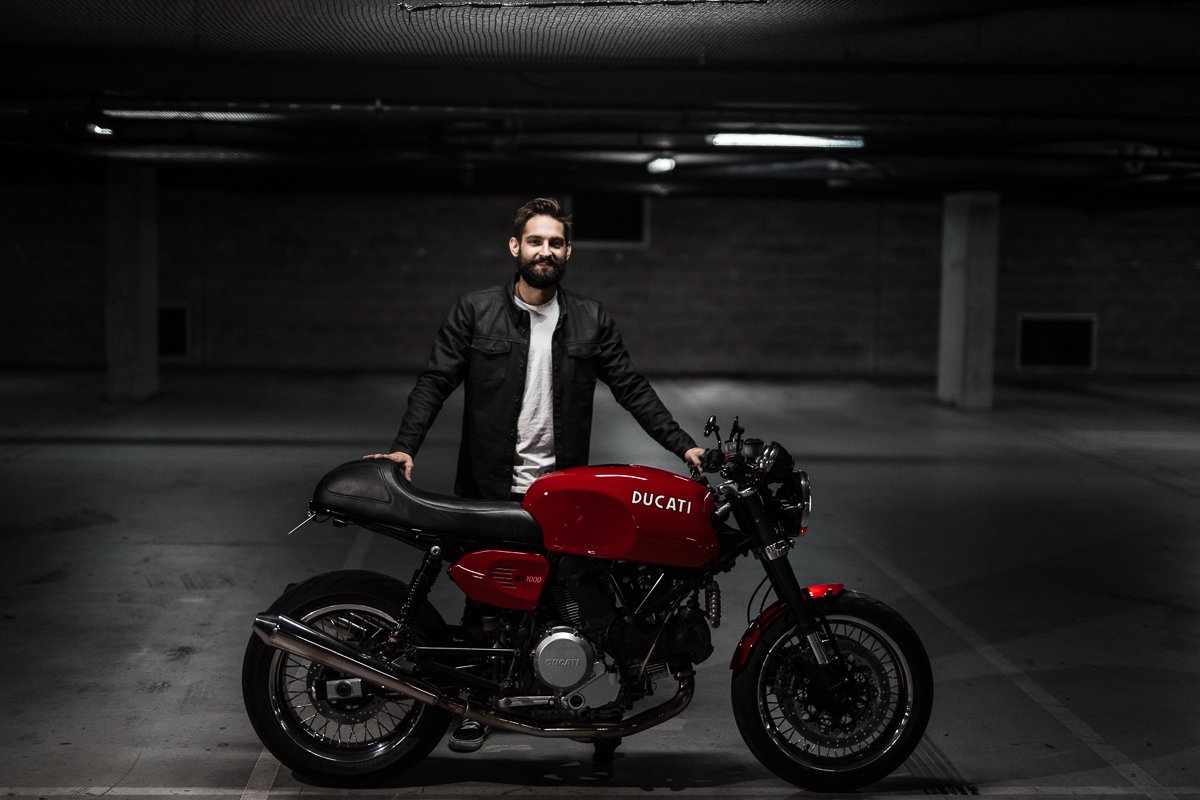 Ride Dynamics advice is always well received on any suspension work, that coupled with a lighter set of wheels has made a great deal of difference to how this Ducati performs through the corners. Once these modifications had been completed, my list was all but ticked off and I was about to hand the bike over to its owner who was foaming at the mouth to ride it….. but there was a complication.

The tweaks and touches we’d done to the bike had made it so damn good looking, that it made a small section of the bike that wasn’t up to scratch, glaringly obvious. The wheels. Ducati’s factory chrome wheels were pitted and the spokes had dulled out. The only thing that would suit the class of the rest of this project was a set of Italian made Jonich Wheels. 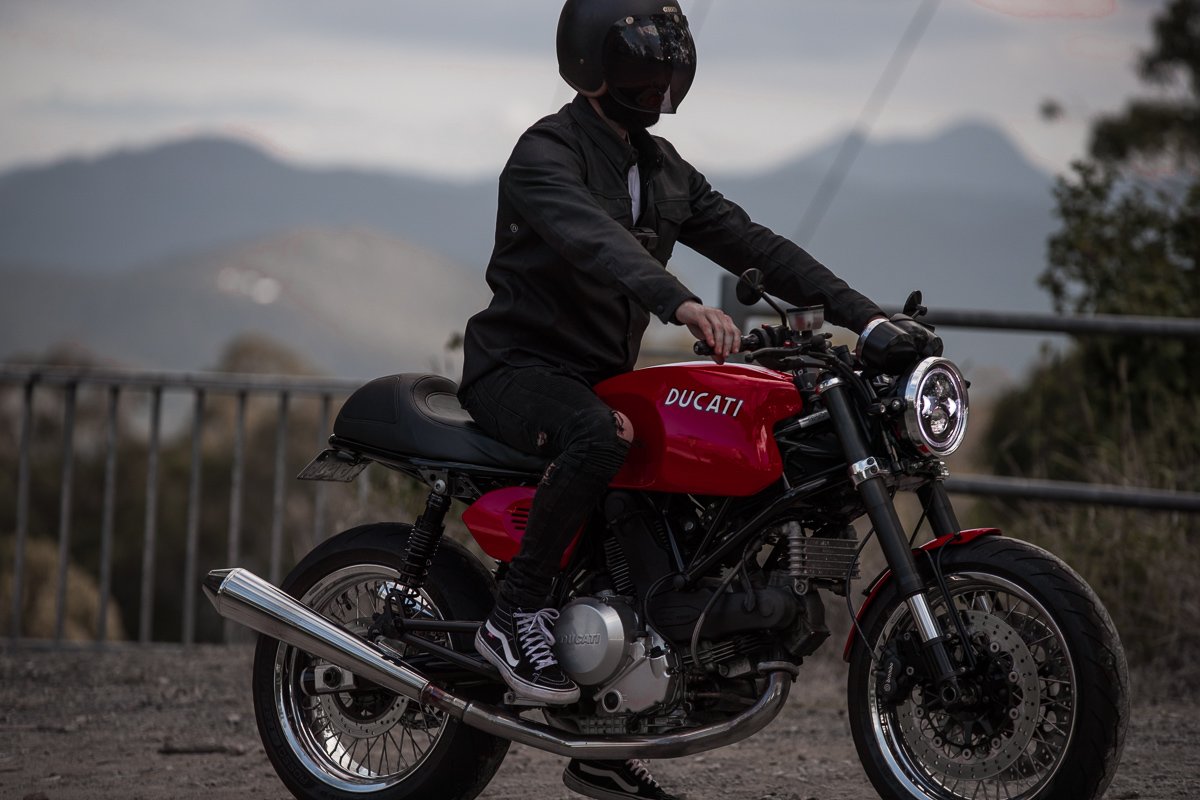 If you’re unfamiliar, Jonich wheels blend art and engineering seamlessly into some of the most beautifully made wheels on the market. After a conversation on colour and finish, we settled on the 48 spoke, black hub, black spoke,  with high polished tubeless alloy rims from Jonich Italy. The lead time is worth the wait for these beauties. I can’t event describe how great these wheels look. They really take this bike to another level.

Purpose Built Moto is now distributing these amazing wheels to the custom motorcycle community in Australia, if you want a set please check out the catalog here and get in touch. 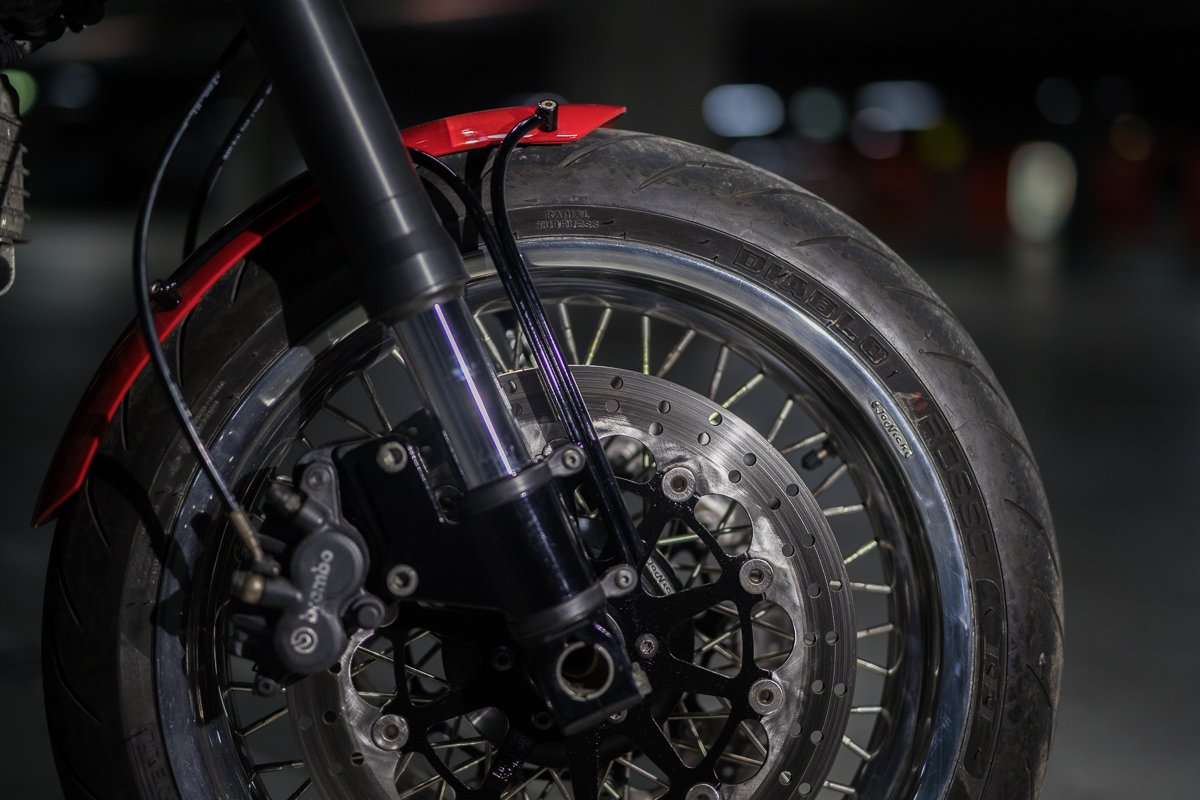 After a bit of installation time, and fitting a specially made Moto Products 525 sprocket, the bike was dropped off the lift and now complete. From the ground up the aesthetics of the Ducati GT1000 had been refined, polished and tightened up. Revealing an extremely well balanced custom motorcycle that strays just far enough from the factory styling to let you know this bike was hand crafted to be 1 of 1. As far as I go with other projects, it’s nice to be remonded of just how far some subtlety and restraint can go on a motorcycle. Building a bike like this is a whole other game in a lot of ways, and something that I truly enjoy seeing the end product of.

Make sure you check out the full build video and some extra footage of  the GT1000 Ducati being put through its paces up a beautiful mountain road. 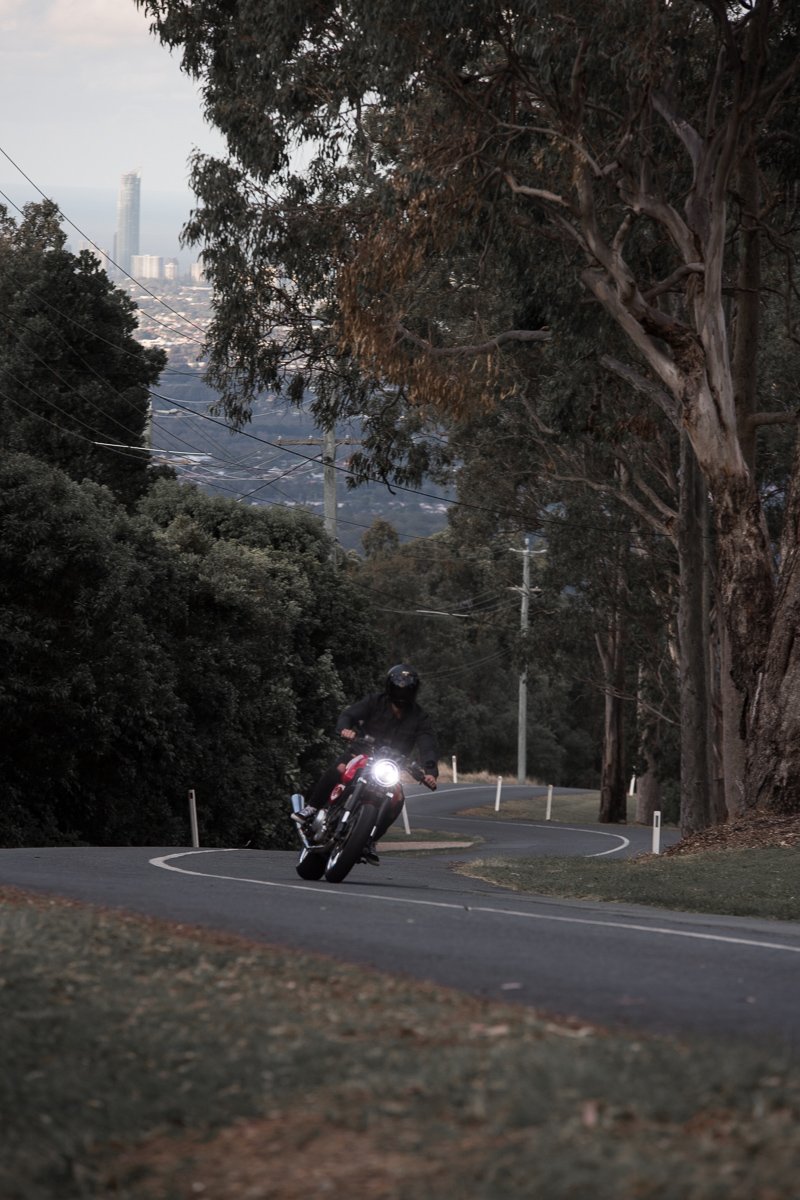 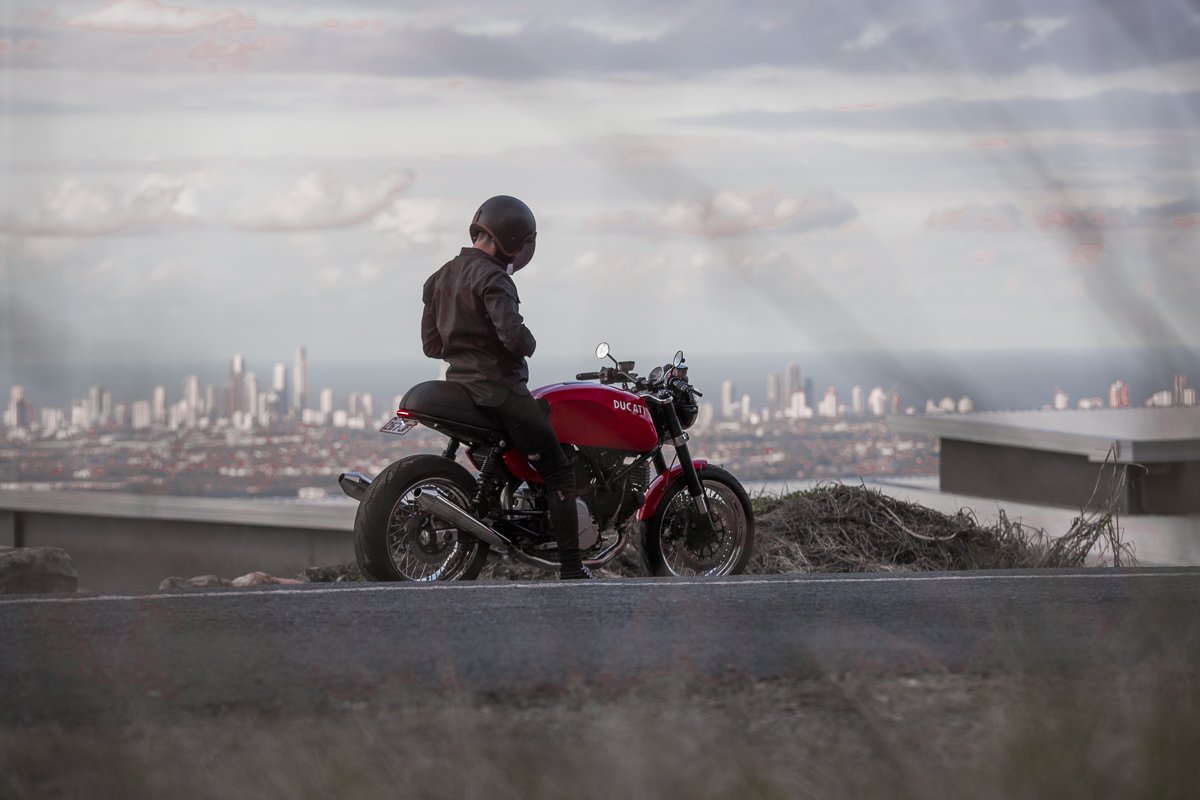 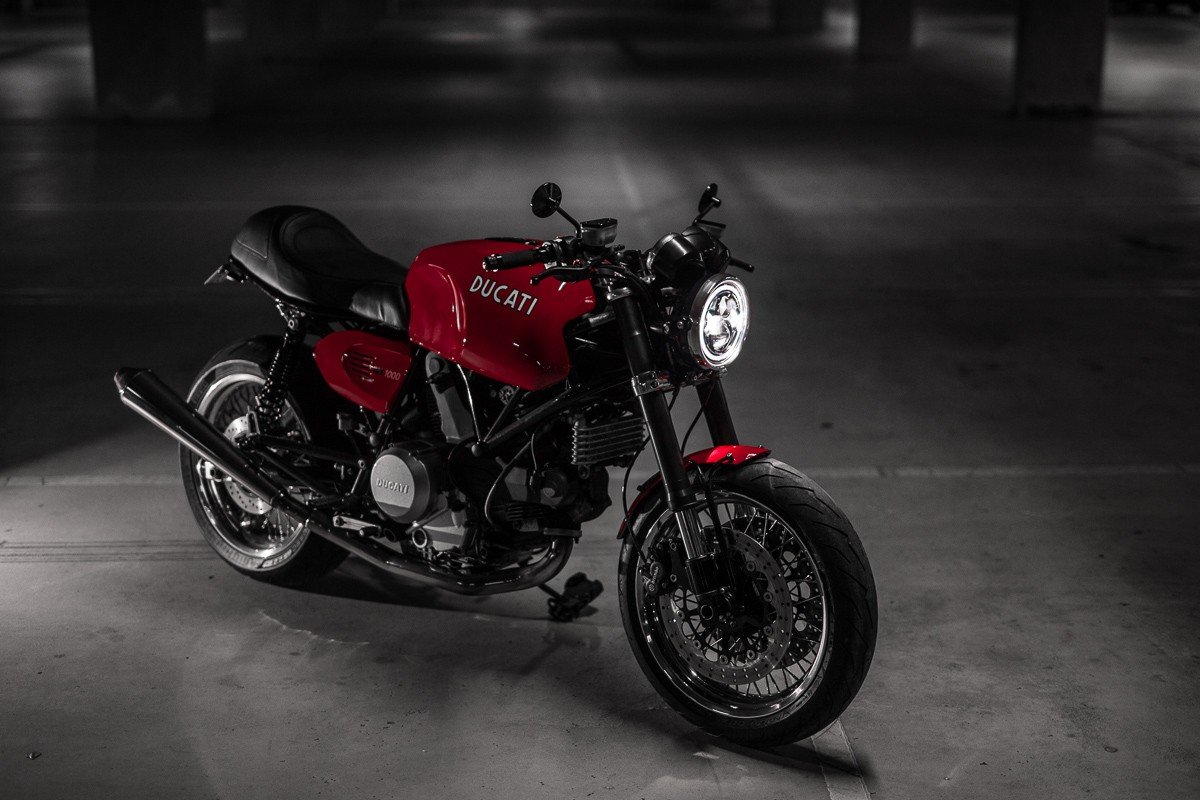