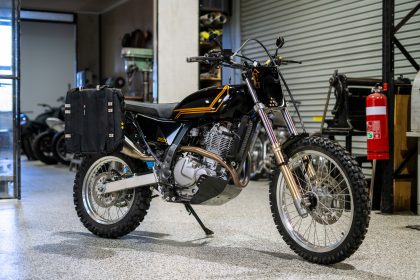 We customised a DR650 that can be switched from a Suzuki scrambler to a street tracker in just 20 minutes.

Often when you buy a tool to do two jobs, you end up with what we call a “shammer” sure you CAN use it as a shovel, and you CAN use it as a hammer, but it does both of those jobs pretty poorly. Same goes whenever I multi-task, instead of doing one job well and seeing it through to the end, I do two jobs poorly. A lot of people are the same. What the fuck does this have to do with a DR650 scrambler? Well that’s pretty much exactly what we were asked to do with this Suzuki scrambler.

Our rider and repeat PBM offender Tobin wanted a light weight adventure bike, but he wanted it to look like a leaned out street tracker, and be super fun on the street as well as capable on long distance off road rides. He wanted it built off of a DR650. 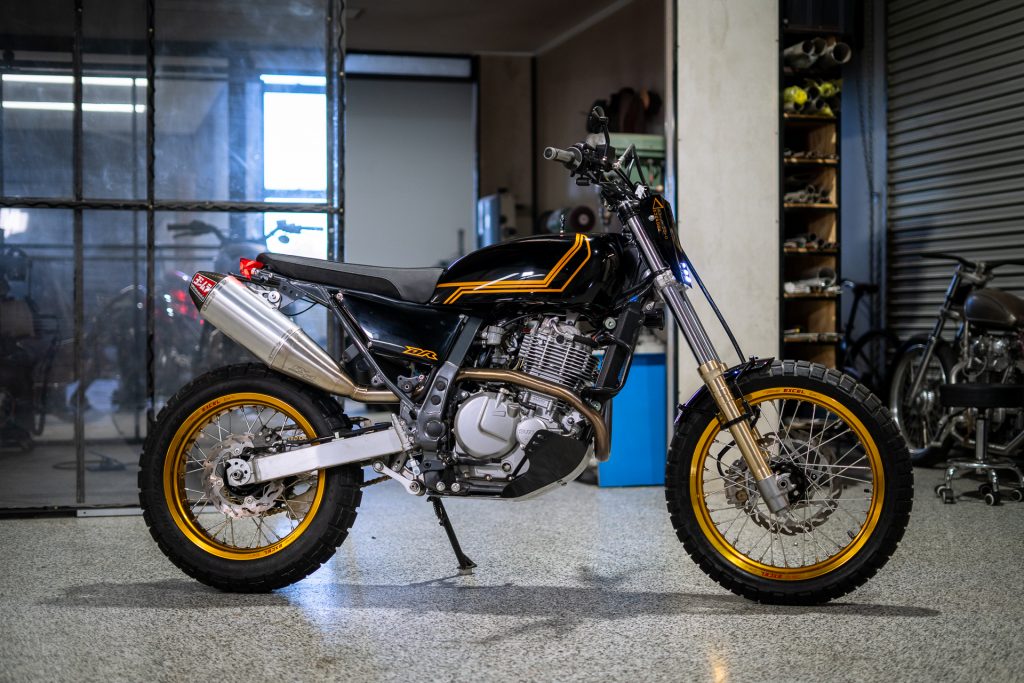 Now while the build brief was no easy task, the DR650 Suzuki scrambler would be the bike to do it with, if it could be done, and done properly. So we start with the parts that won’t change between street and off road riding. First the tank, then the seat, front fender and front lighting.

I had a reasonable condition CB550 super sport tank at the shop with a rusted out top. We cut out the top, rust treated the tank and re-fabricated the top to house a moto gadget Scope mini. We  fabricated mounts to accommodate the front rubber mounts and a new rear mount. Usually, we would use a smaller tank for a job like this, but the off road adventuring was always looming in the background, I knew we needed something bigger. So with the new tank mounted, we trimmed the rear of the frame, and fabricated a new seat and side covers. 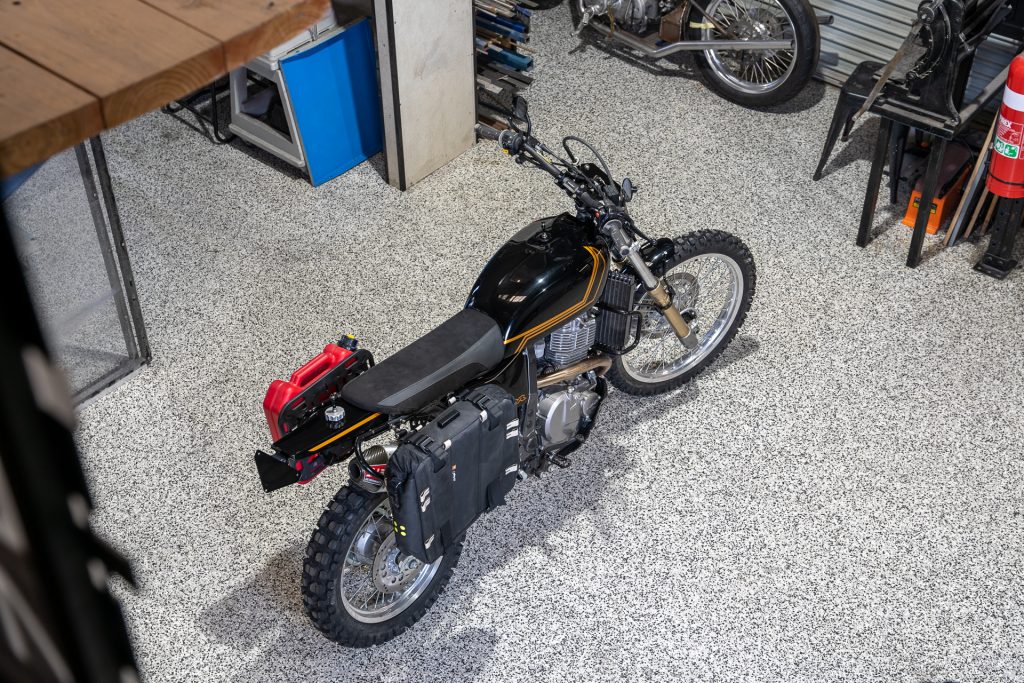 Next on the fabrication list for the Suzuki scrambler was the new fender and lighting set up on the front. We’ve fabricated a number plate style headlight shroud. Slim and tight fitting, this houses the running light with the Projector headlight mounted under the bottom triple clamp. The front fender is a necessary multipurpose bit of fabrication, fabricated off a set of fork clamps that allow the fender to be slid up and down on the fork lowers to adjust clearance over your tyre, and switch between wheel sets easily.

You may have guessed that yes, this bike comes with 2 x sets of wheels. We’ve added a set of aftermarket wheels, with Gold excel rims, wave disc rotors and another sprocket. The Gold Street wheels are a 17” x 4.25 on the rear and 19” x 2.50 on the front wrapped in a set of Pirelli Rally STR tyres. The stock wheels have been retained with the standard running gear with a set of Pirelli MT21 Enduro tyres.

Another addition for the swap between street and dirt riding is the tail accessories, these include an auxiliary rear tank, and 2x bag racks that house Kreiga bags and additional fuel cell if needed. 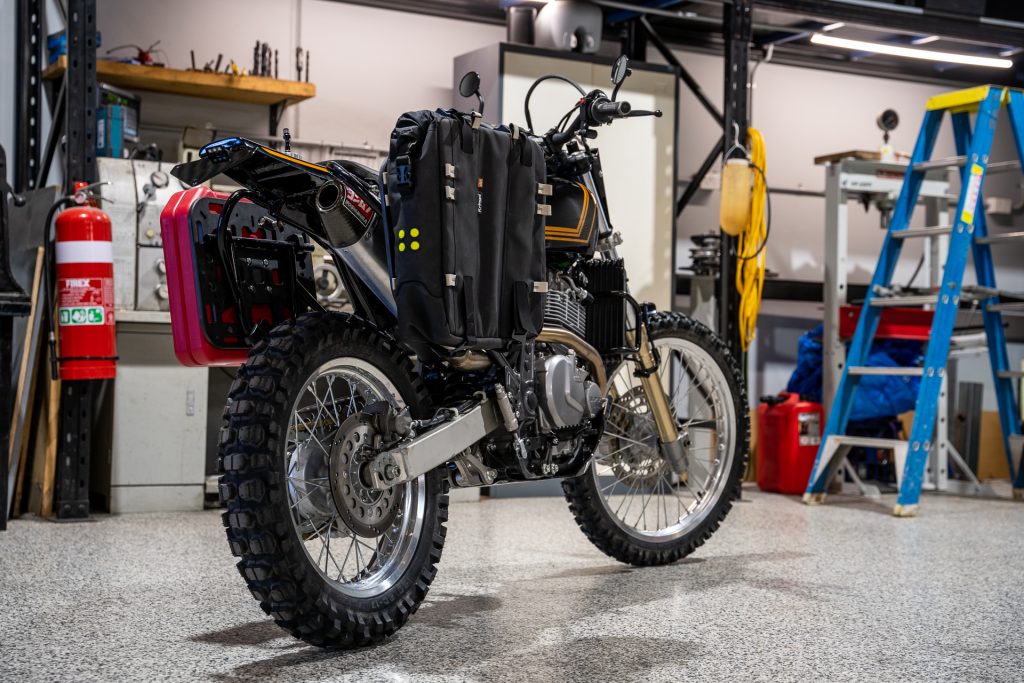 For the 6L rear auxiliary tank swap, four bolts hold on the rubber mounts, and a quick disconnect fuel line was used hidden under the left side cover. We’ve shaped this to act as a rear fender to properly shield the rider off road as the street tail set up is pretty short.

Next on the adventure conversion of the Suzuki scrambler will be your bag racks. With 2x screws on each side, the frame slugs are released and the bag racks slide inside the frame tube, the mounts are triangulated on the rear frame rail with a bolted mount.

Once these are on, your last job will be the swap the number plate over and switch your wheels out. Your DR650 street tracker is now ready for anything!

The exhaust received an upgrade using a Yoshimura RS-4 retro fitted from another big bore thumper, a simple swap over with a custom bracket and link pipe, the bike sounds amazing at full noise, and nice and quiet at idle, the perfect balance. 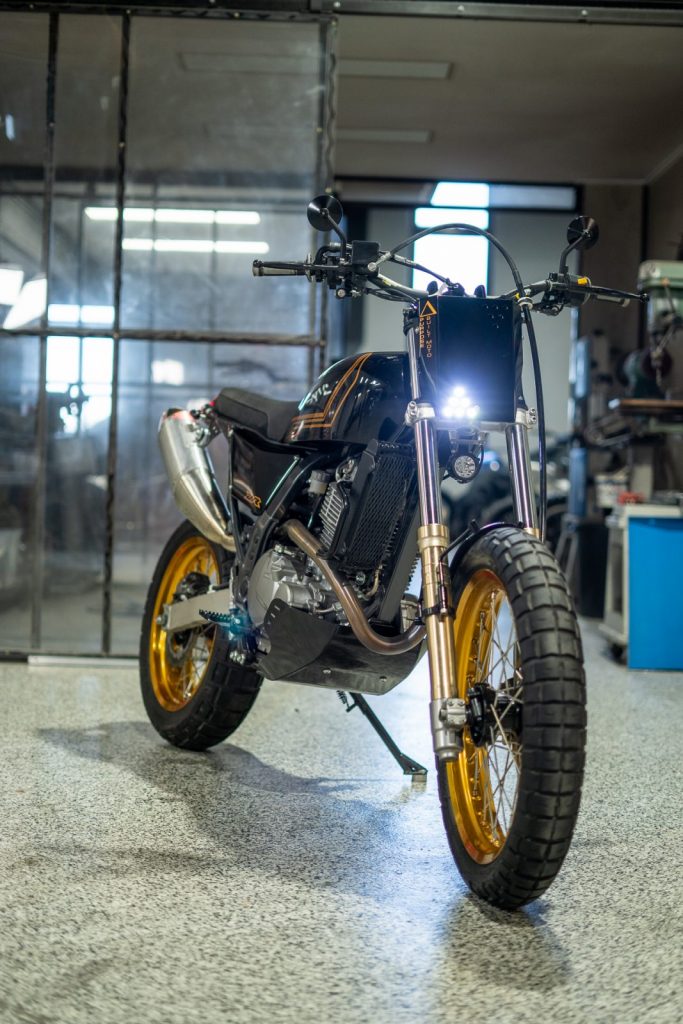 With the new exhaust the DR650 Suzuki scrambler needed the carb looked at to balance out the lean condition due to the exhaust mod. We’ve fitted up a stage 2 performance kit to the standard carb and worked out the kinks with a bit of testing.

This new DR650 was taken from the alleged last run of the iconic dual sport Suzuki, after the test rides on this bike I can say I really hope they bring these back! The simple air/oil cooled motor, steel frame and ergonomics for long range riding make these a builders dream to work with. Allowing us to craft a ride that’s capable of nearly anything and looks good doing it.

With a conversion time of around 20 minutes the DR650 Scrambler is our rider Tobin’s weapon of choice no matter where he’s heading. 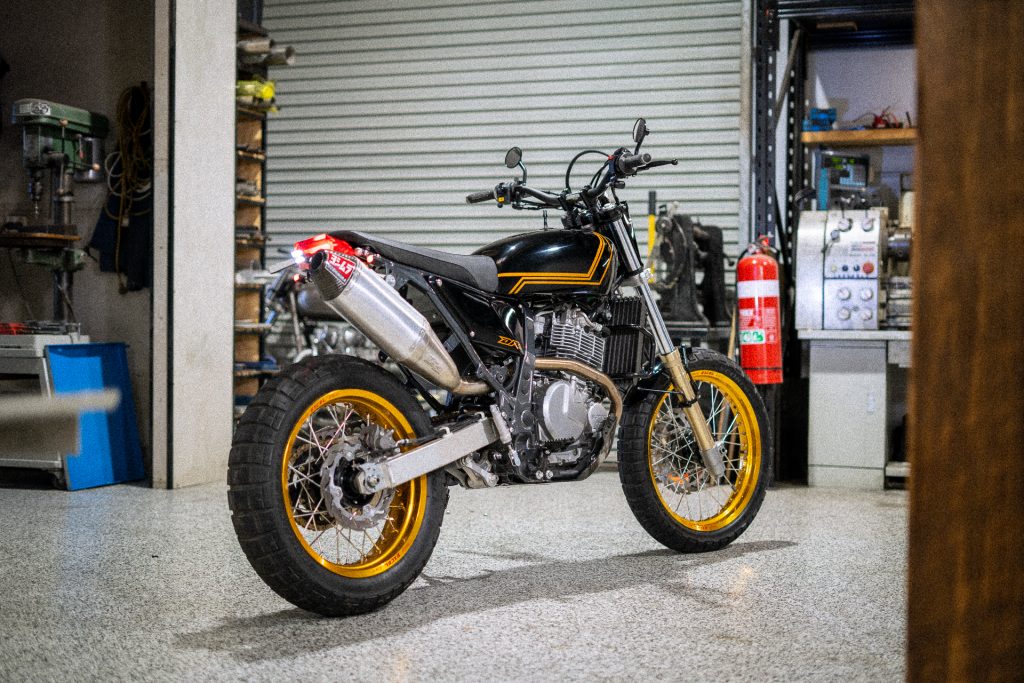