Check out this epic Yamaha SR400 Bobber that I was so excited to work on that ended up a sad story I never got to finish. 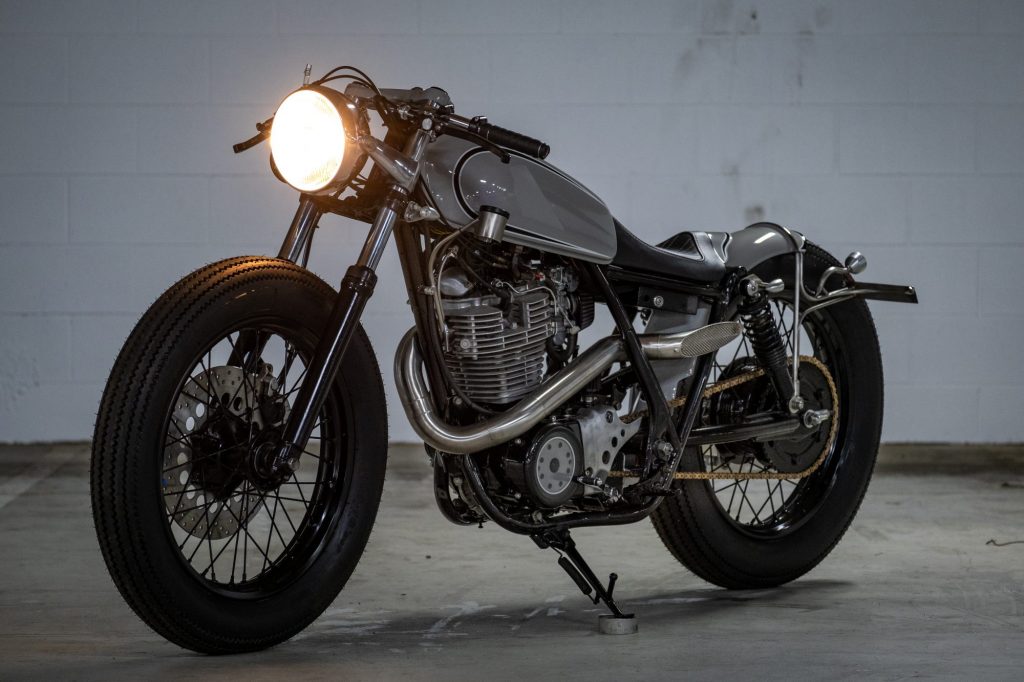 Creating something different is a hard task with a donor bike as prolific as the SR500 or SR400 Bobber. So when the project rolled into our workshop I was excited for the direction it would take. An SR400 Bobber, slammed on its ass, with a low line silhouette. FUN!

As things progressed and COVID started to wreak havoc on our industries supply chain things took a sour turn for this project. Our client became impatient, and frustrated. My hands were tied. I had to let this one go unfinished.

You’ll hear quite often from people lucky enough to have their passion transform into their job, it’s not always easy. A good mate of mine Matt said to me once “There’s nothing worse than one day waking up and realising something you used to love, has become something you hate because of money.” Having been there before I knew he had some perspective on things like this. So when I felt the enjoyment slipping out of this process I decided to cut it loose. With this bike, the juice wasn’t worth the squeeze. 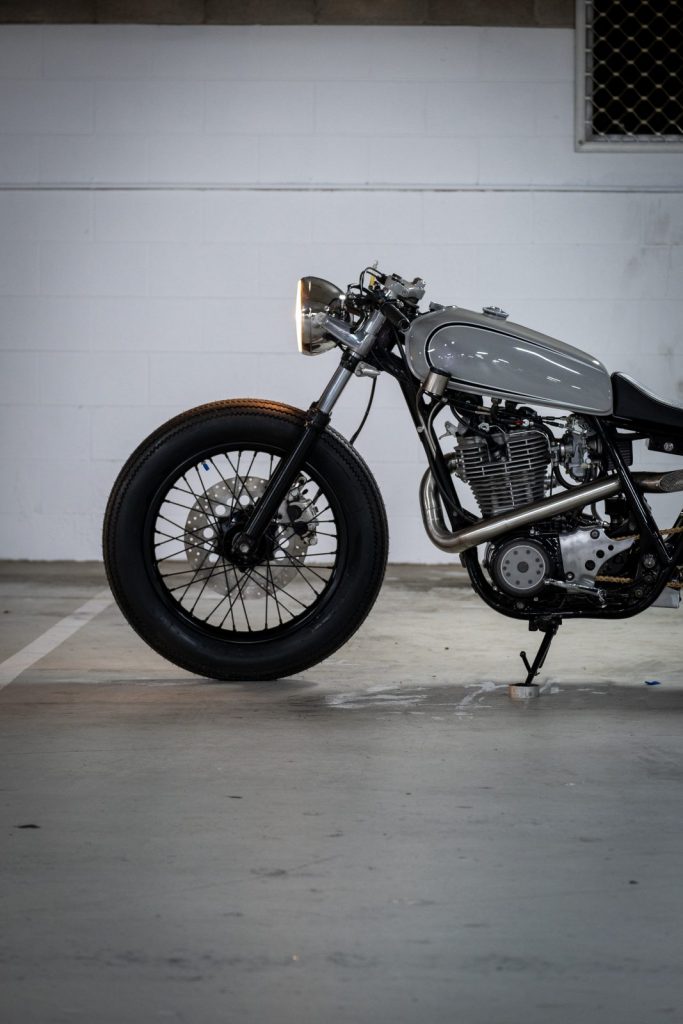 What I can share with you is all the work we did complete on it, shaping it into the sleek and brutal bobber it has become. What I can’t say is how it rode, because we didn’t get that far, so let’s dive in!

Up to the point we received the SR400 it had a few mods done, including a frame chop and an old tank fitted. This started to set the tone. The SR400 was slammed on the rear with a set of shorty shocks, had a 535 big bore kit and a Mikuni Pumper carb fitted up.

Fabricating the rear brake light and fender mount was our first job. Done in stainless steel round-bar with a side mounted plate and brake light. The seamless LED Orbit brake light mount was made from a solid bar, reamed out to allow a cable passage then heated and shaped into the flowing shape you see fixed on the rear of the Yamaha bobber. 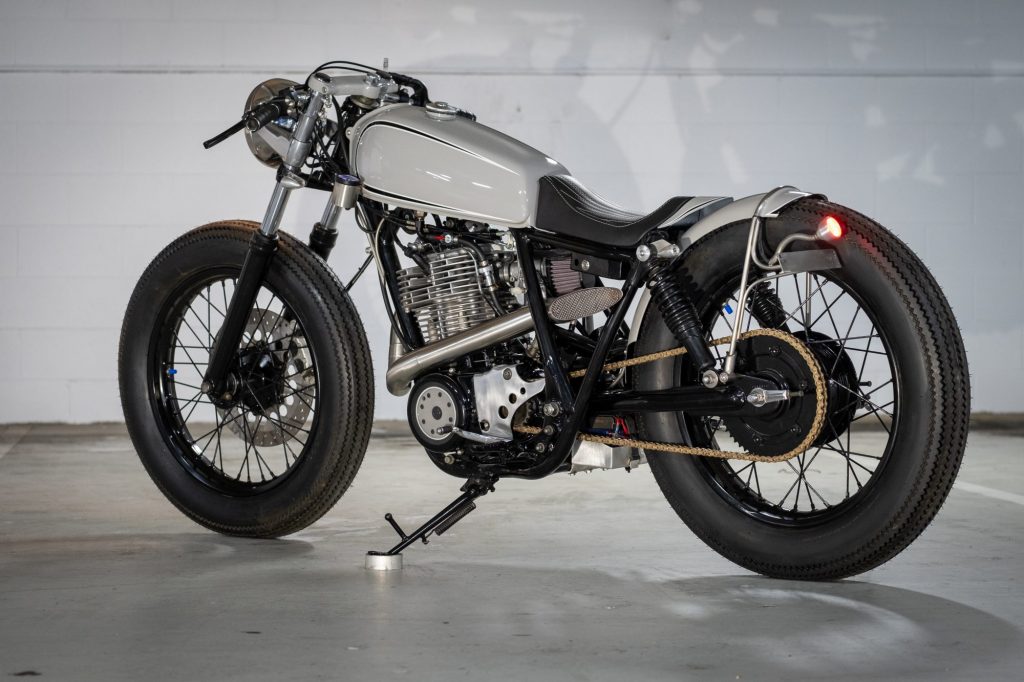 The previous frame mod had not allowed any wheel travel on the rear so a few modifications were made to make sure the small amount of rear suspension travel left was allowed to move freely. With that came a small electrics tray that houses the Electronic brains and switches to keep the handlebars  clean. Last piece was a set of hollow tip LED turn signals mounted on the shock brackets. Our PBM LED’s aren’t the smallest thing on the market, but they look great, so why hide them? That  opened the gate for the seat to be finished off.

An important styling point on this bike is the tail section. Given an odd tank to work with, and the chopper style rear fender mount the seat wasn’t fitting with the bike well at all. We started again and included a short, smooth racer style tail cowl that visually ties the seat to the rear fender. The simple sheet metal cowl allows your eyes to flow front to back with no jarring gaps. It also leans into the Japanese street feel I wanted to draw out of a Yamaha SR400 Bobber.

Arguably the most stand out piece on this Japanese Bobber is the exhaust. We kept it high and tight which looks amazing now it’s done, but wasn’t without its challenges. Deciding to sacrifice a little performance for style here. The Yamaha Bobber received a 2” exhaust straight from the header that snakes around the left side of the bike, finishing just under the seat. The custom stainless exhaust was painstakingly hand crafted to include a hidden internal muffler section, secret mounts and a mesh wire spark arrestor fitted into the slash cut tip. Parts like this always kick your custom up a notch, so it’s often worth the extra time and effort to make it happen. 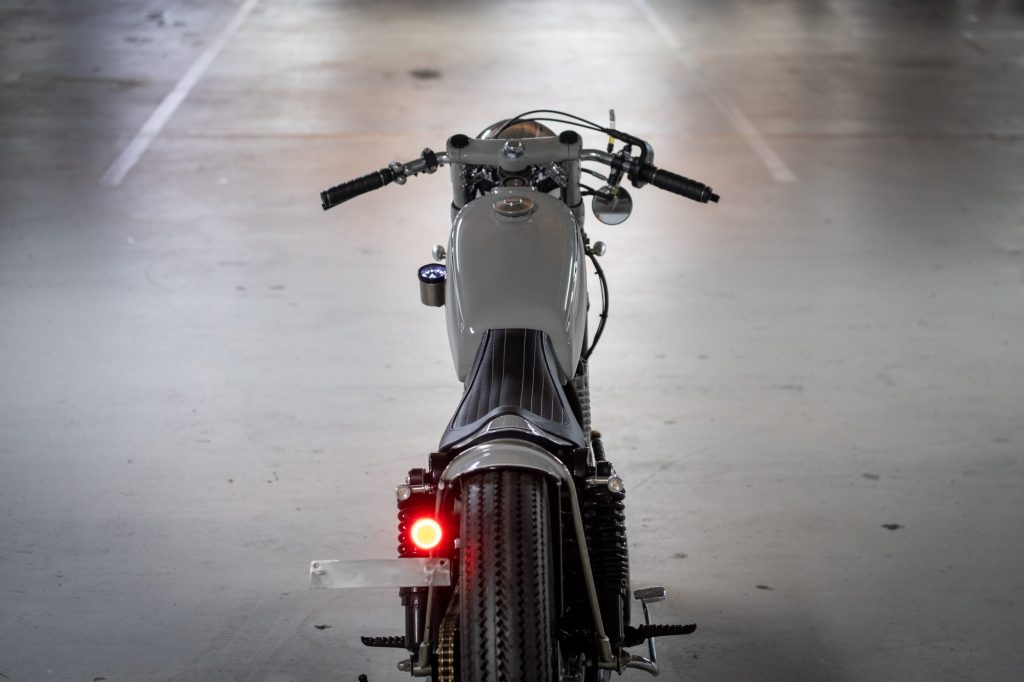 Some more clean detailing came from the side mounted mini speedo. Mounted to the frame by way of a handmade speedo cup and stainless steel brackets. Shaped to compliment the style of bar work on the rear.

The final pieces of the fabrication puzzle were on the front end. Ditching the standard bars and clamp, we talked the client into a set of one off clip-on bars, hand fabricated in house. These flowing chrome pieces keep the low line of the bike in check and with the seating position lowered so much and mid-mount pegs it’s not bad to sit on at all. With the bars moved the top triple clamp was smoothed out, any holes welded up and finished for paint.

The Yamaha SR400 Bobber was to be run without a front fender at the request of the rider, so we moved to sorting the stance out and finalised the front end lighting. The standard shocks were stripped, and rebuilt to be dropped 40mm. As with most things on the bike, it’s more about that style than it is about amazing handling capability. With a bit of tweaking the forks work well, won’t bottom and allow the SR to sit hugging the road. 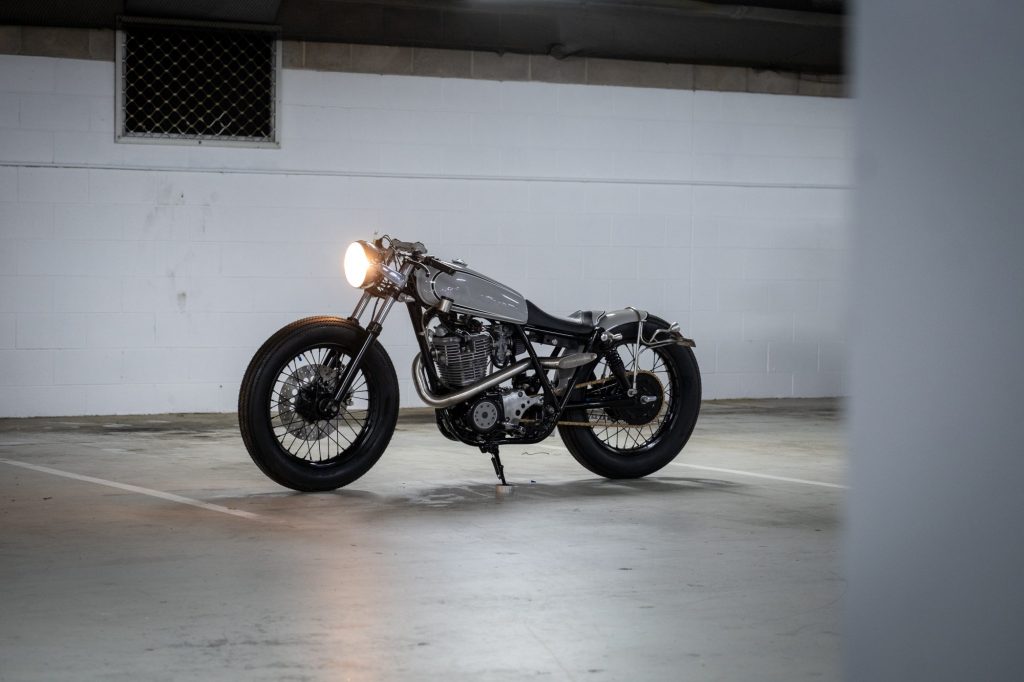 Keeping a classic chrome headlight, and fitting a matching pair of PBM Silver Hollow Tips up front kept things clean and simple. These sentiments are echoed with the colour and paint design. Ultra simple- Porsche bone grey, black and white pin stripes. I sketched out the design and sent it off to PopBang Paint down the road.

During this time I threw my head into the Bobbers re-wire. As I always do, I segregated my ignition, charging and lighting circuits. Linked up all the lighting and switches, with the new Reg/Rec and hidden battery, then moved through the ignition circuit, linked it all up and gave her an almighty kick….. nothing.

Now the troubleshooting started. No spark, where’s the issue? This model Yamaha SR400 Bobber from 2004 was never released in Australia, that meant all the wiring diagrams I could find were in Japanese. Even without being able to fully understand it I noticed something was wrong. This model SR400 came with an immobiliser on the key, the owner had stripped the old loom, and electrics and thrown it all in the bin. Which didn’t help me at all. The Yamaha CDI wouldn’t spark without the gate signal from the immobiliser, it also wouldn’t allow a bypass. 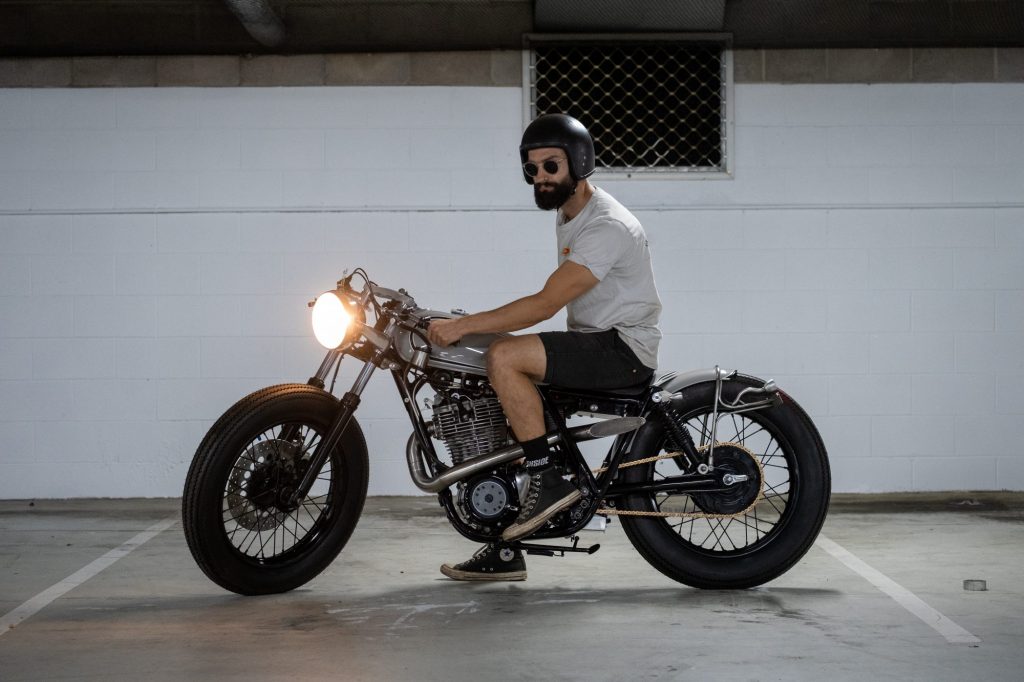 With a few favours called in from Japan a mate had got his hands on the wiring diagram and translated it for me, at the end of the day I was only left with one option, to scrap the OEM CDI and get an aftermarket performance CDI that allowed a bypass of the immobiliser so the bike could run without the stock Yamaha key that was probably 100m deep in landfill by now.

That’s where the issues started. With the owner seeing his bike 95% complete, but unable to move, the patience was wearing out. Then with a 4 month wait on the performance CDI from Japan things boiled over and I pulled the pin on the project. The SR535 bobber was handed back once the CDI arrived and the owner finished it off in his garage. From what I understand the SR is up and running around making way too much noise through that wild exhaust!

There’s no build video on this bike, but no doubt you’ve enjoyed the vibey photos from our mate Brandan at Ninefivers Media that we got too shoot while the project was at a stand still. 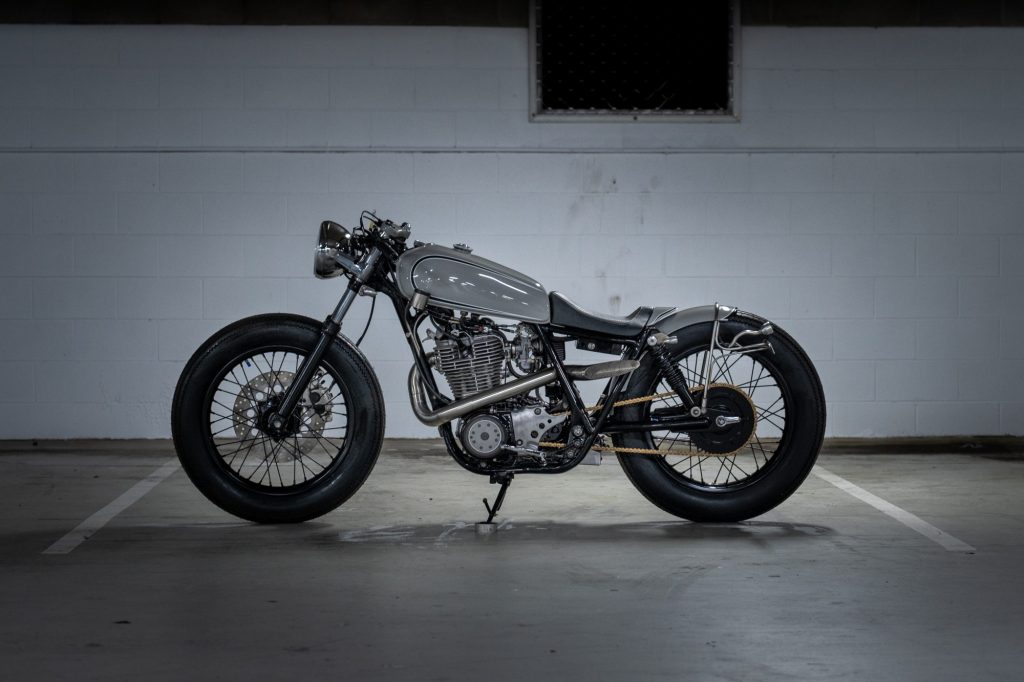