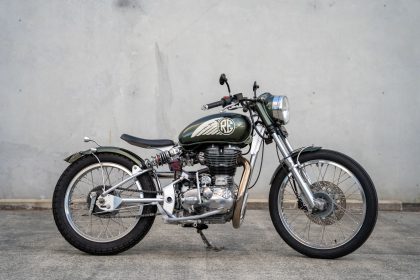 Here’s our complete build run down on this custom Royal Enfield Classic 500 and don’t forget to check out the gallery at the end of the blog!

This Royal Enfield Classic 500 came to us purely by fate. Most often our clients find us online, or at bike shows. This one walked right up to me and said hello on the street outside my house. Dave had just moved to the Gold Coast from Sydney and had a few old bikes he needed roadworthy certs to get on the road. He saw my van, came down and asked and we helped him out there. I started riding with Dave on weekends, he is in the film/tv business so he came along to our Wide Of The Mark premiere and we became mates from there. 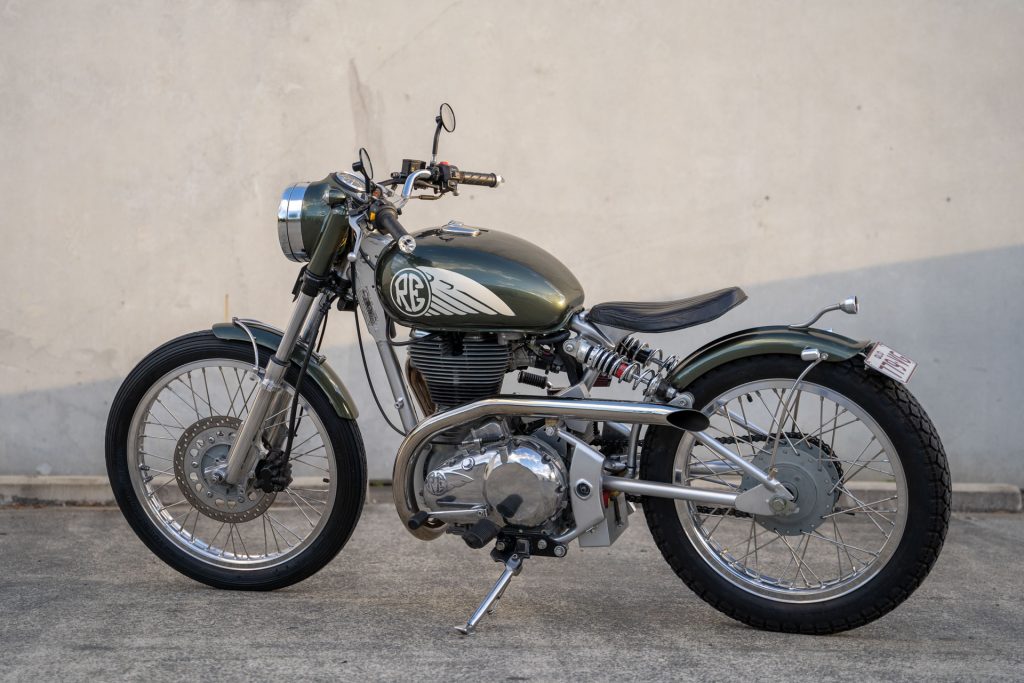 Dave loves his big single cylinder bikes, growing up in PNG his current TT500 is nostalgic of the bikes he grew up riding. His Royal Enfield has much of the same appeal, a big thumping single piston machine that just gets the job done. The bike already had a few bits of previous custom work, but there was a more exciting motorcycle lurking beneath the surface that needed to be let out.

After I took the Royal Enfield Classic 500 for a ride, we spoke over a few key elements that needed to be addressed. The end result wanted to be styled in a way that let its classic roots show through, Lowering the overall stance of the bike to get that bobber seating position right and classing the entire thing up a bit with some fine fab work and more refined finishes. We broke the Makita grinders out and got to it. 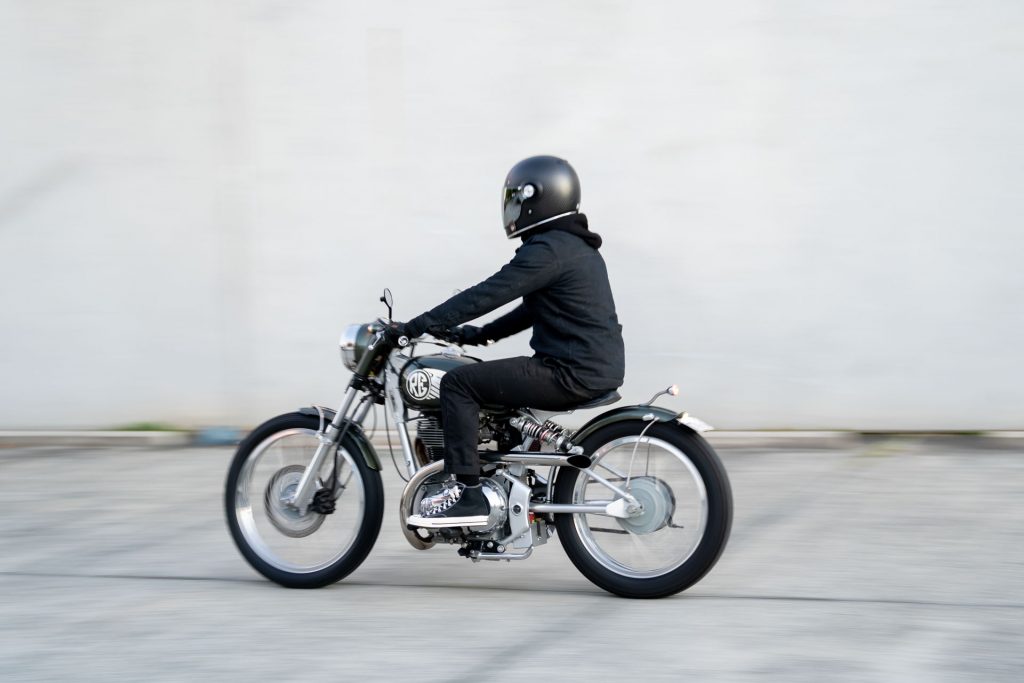 The first order of business was the rear suspension and wheel sizes. Currently running an 18” rear, 19” front with quite a high ride height in the rear. The set up caused a steep steering angle that felt concerning when riding at speed. We’ve rebuilt the rear suspension and lowered the mounts using a 280mm set of twin shocks custom built with YSS Australia to get a correct and comfortable spring rate. Re-lacing the Enfield hubs to a 21” front and 19” rear rim also helped relax the steering angle and set the trail to a point where this bike is most at home on wide open roads .

The larger rear wheel stepped the gearing up a touch which has the Royal Enfield Classic 400 comfortable at low revs on the highway. The previous mods had seen the airbox and side covers removed leaving the electrics stashed in a bag tied up under the throttle body. We’ve worked to fabricate some covers and re-mount a lot of the sensors, relays and other components under the tank or neatly tucked on top of the gearbox. The battery has been relocated under the swing arm. 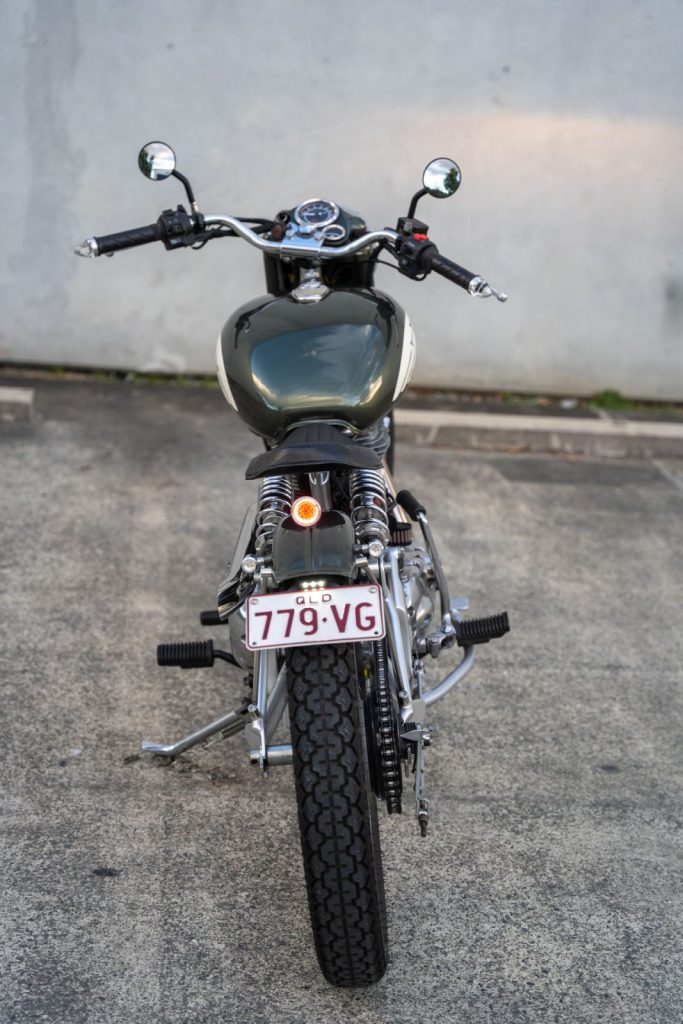 Making sure we got the stance of the bike correct, the seat section was left until the suspension and wheels were finished. Using a solid bracket swung off the single back bone of the Royal Enfield  the seat floats over the rear fender. We shaped up a slim single seat and sent it off to Timeless Autotrim for the leather work. 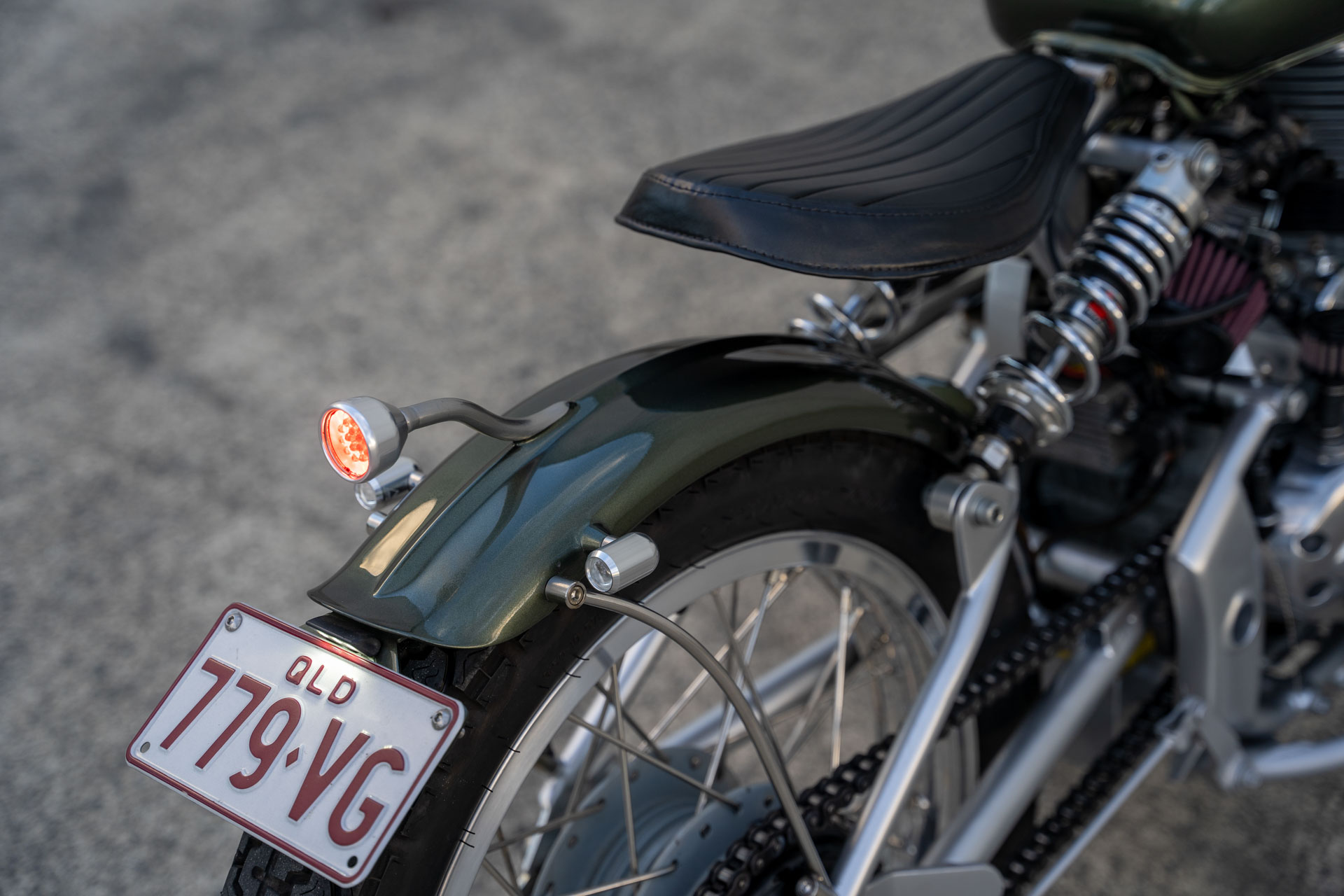 We’ve used a skinny ribbed fender over the rear wheel with some clean polished stainless brackets made up from our universal fender mount kit. The tail lights have been frenched into the rear fender with the brake light being paid some special attention. Mounted on a threaded tube that I turned up and had all the cables discreetly hidden under the fender. The lighting on the rear is a real stand out. The front fender is more of that same exacting fabrication and bracketry our clients have come to expect. Dylan took the lead here and welded up a tricky arrow style mount where we used a pair of steering damper clamps as our mounting points to the forks. 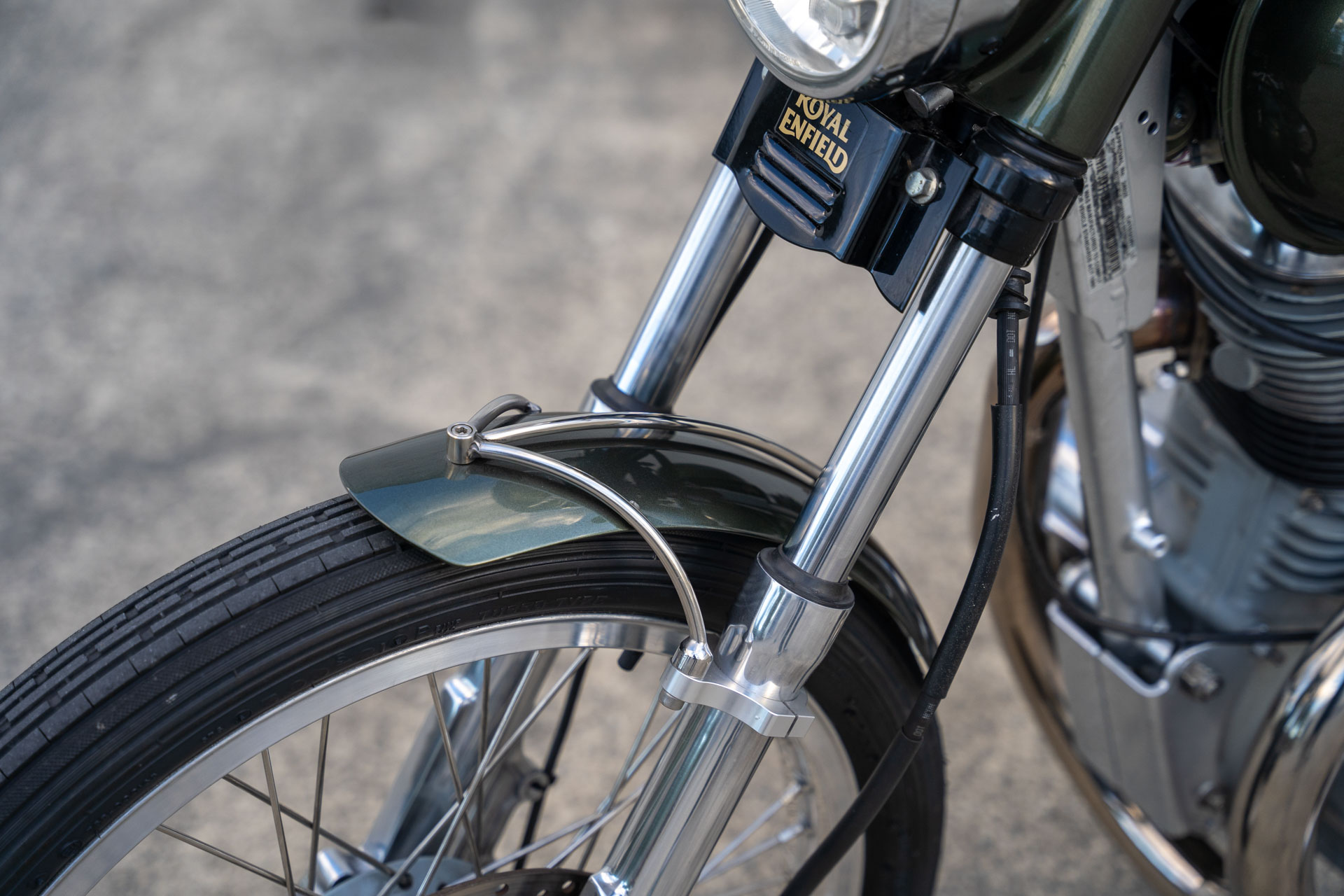 Dave had a very particular vision for his bike, so when it came to the colour and paint design, he was a lot more involved than most of our clients. We flipped through countless colour books searching for the perfect fit until we found this strangely named Citroen colour. A metallic olive green, that was the one. Initially the tank was meant to be dressed with some solid brass badges, a winged Royal Enfield design. Unfortunately the casted brass was a bit too brittle to shape correctly to the contours of the tank so a design needed to be painted on. A mate of mine Max helped out with the graphic design to get the shapes right and Justin from Popbang Classics laid down the paint for the Custom Royal Enfield Classic 500. 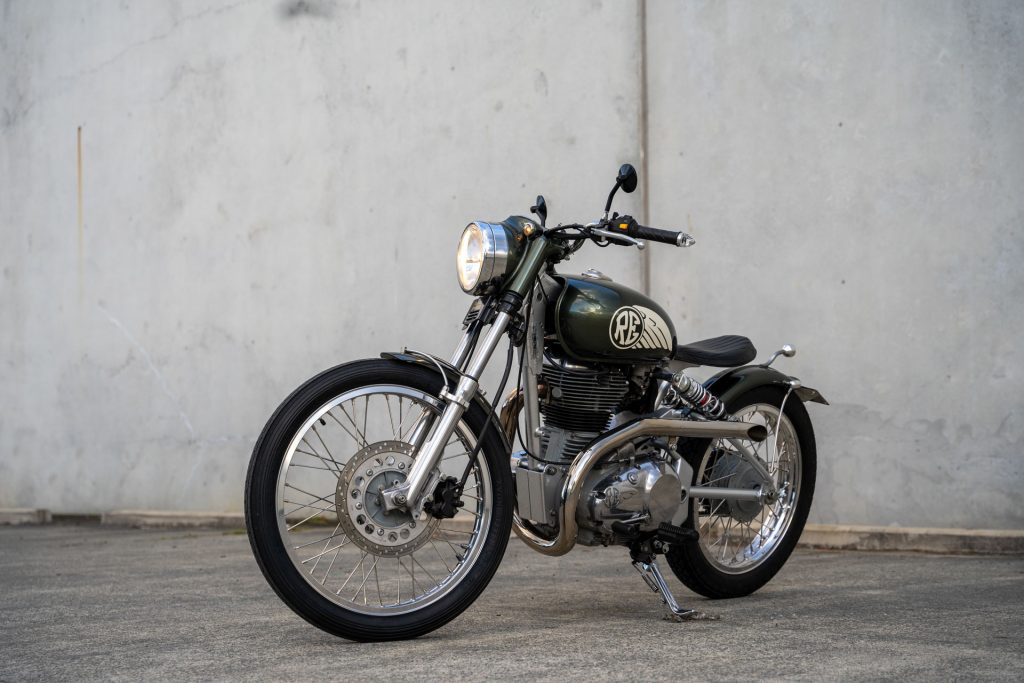 During that time we got busy brightening up the aluminium parts as the bike was re-assembled. Making the surfaces shine. When the bike went back together there was one element missing, with all the work we’d done in getting the Royal Enfield Bobber looking and riding right, the previous exhaust just didn’t look at home anymore. 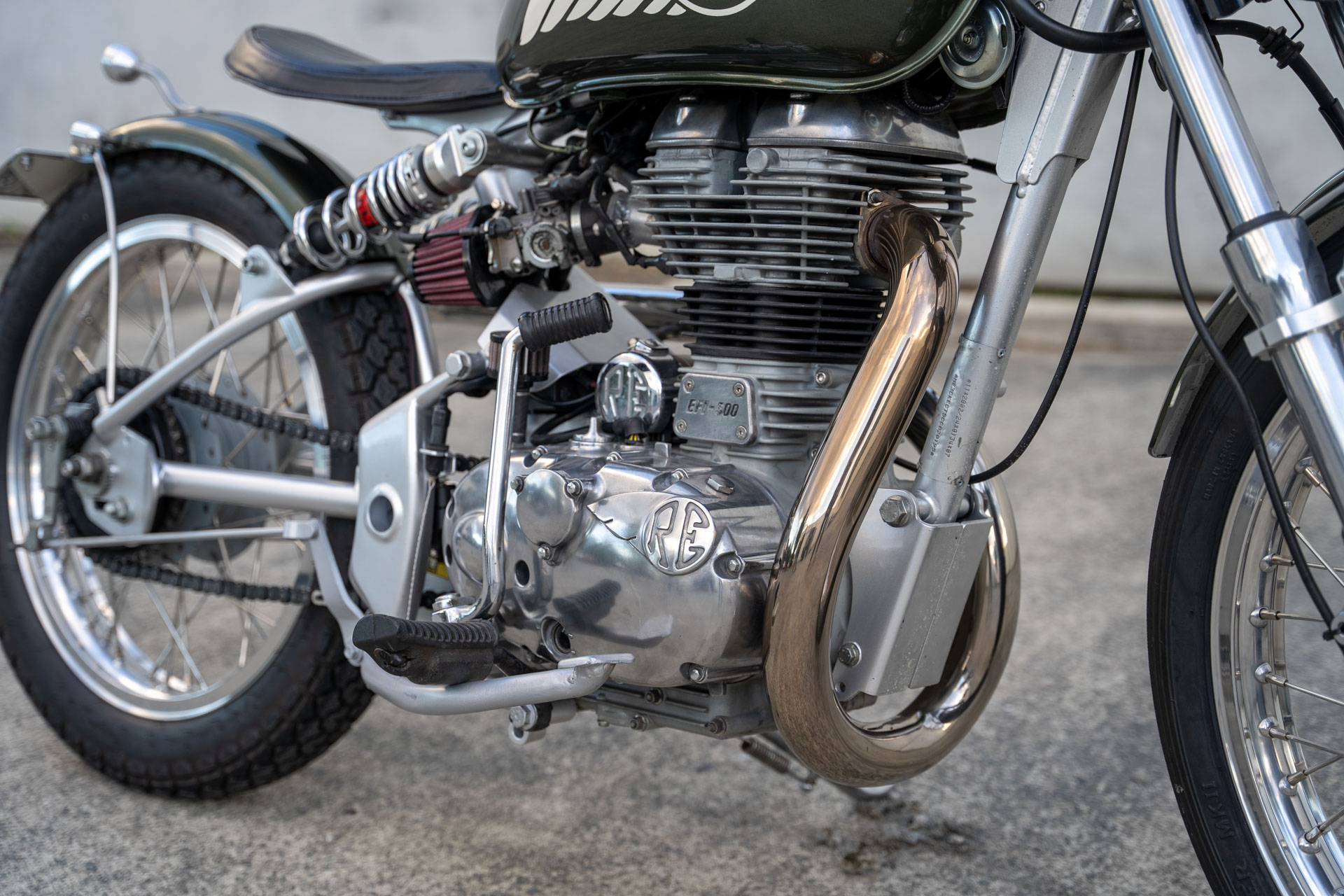 One last meet up with Dave was in order and luckily he came to the same conclusion, we needed to craft something special for the exhaust. From experience we know single cylinders can be some of the hardest bikes to get sounding right. Too short and not enough muffling can have you riding something that sounds reminiscent of a Briggs and Stratton toe cutter mower from the 80’s.
I was determined to not only have this bobber looking great, but sounding good too. 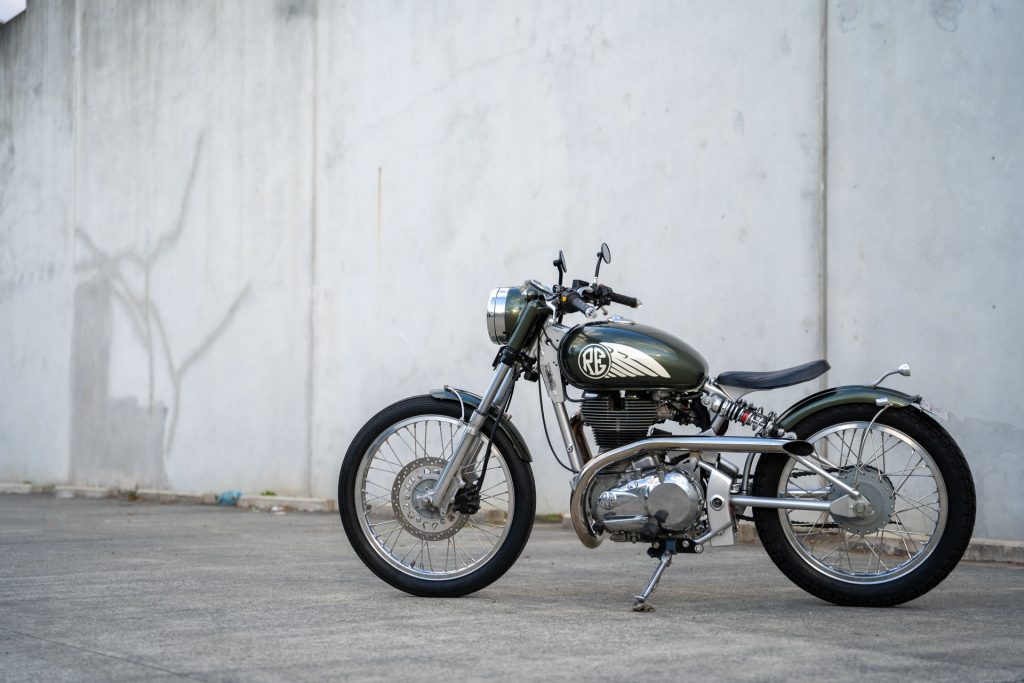 I sat in front of the bike and worked out a design that gave us the best shot of making that happen. The oversized 2” header would curve down and pass under the engine, switching sides before the exhaust would curve up and sweep over the polished clutch case. Not having a straight section until it was stretching towards the rear. That straight section houses the muffler in a 400mm long section before the turn out that exits behind the rider’s leg. The finishing touch was laid out, welded up and polished to a mirror finish.

The first experience riding this 500cc bobber was a leisurely run through the hinterland. At speeds of 80-110 km/hr the Royal Enfield Classic 500 feels at home and stable on the road, with the upright and relaxed riding position on top of the relatively small bike cruising anywhere is a lot of fun.

The bike is no high performance machine, but you don’t really want it for that style of riding. All you need is a quiet road on a sun soaked afternoon to let it all go and enjoy the experience.

Want to see some more? Head to the gallery for the 2015 Royal Enfield 500 Bobber 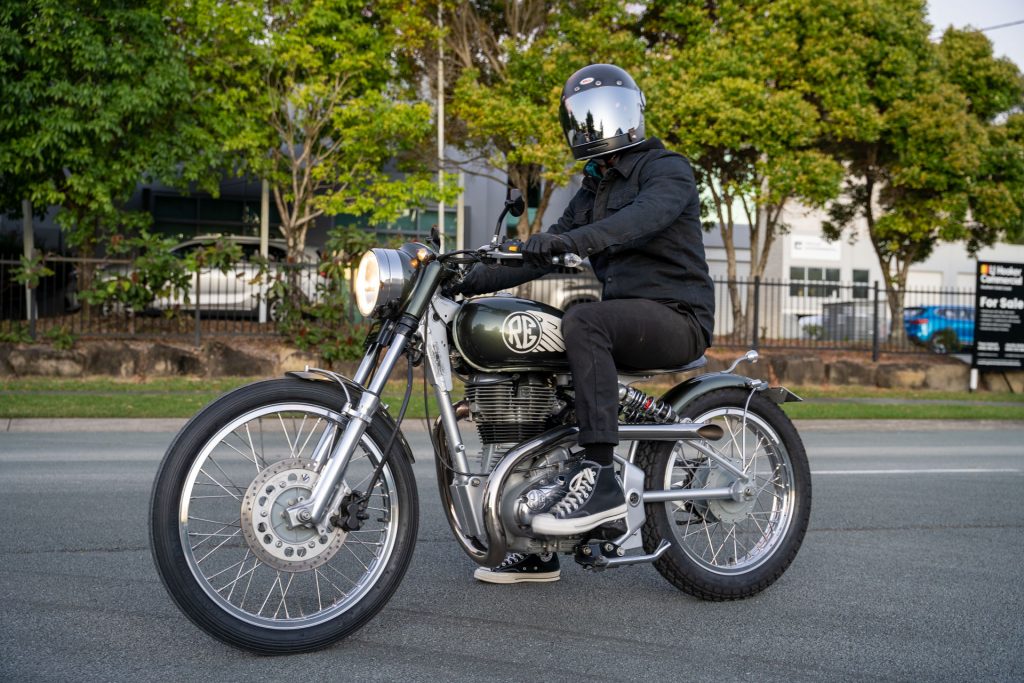