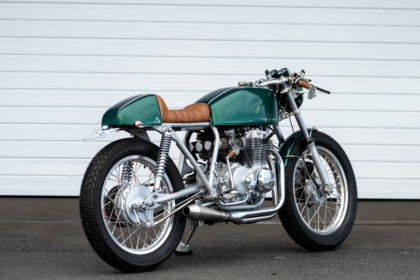 A few years ago I was given the chance to build a great brat styled Honda CB350 four. With its simple layout, and easy to work with styling we were able to create something pretty special for that client. So when Paddy asked me to bring his 1975 CB400F back from the dead I jumped in head first with a host of ideas I had that didn’t get used on our previous project. Essentially the same bike with a different tank, and bigger top end. The project felt familiar right away. The Honda CB400F had been through a crash, and a few drops in its lifetime. 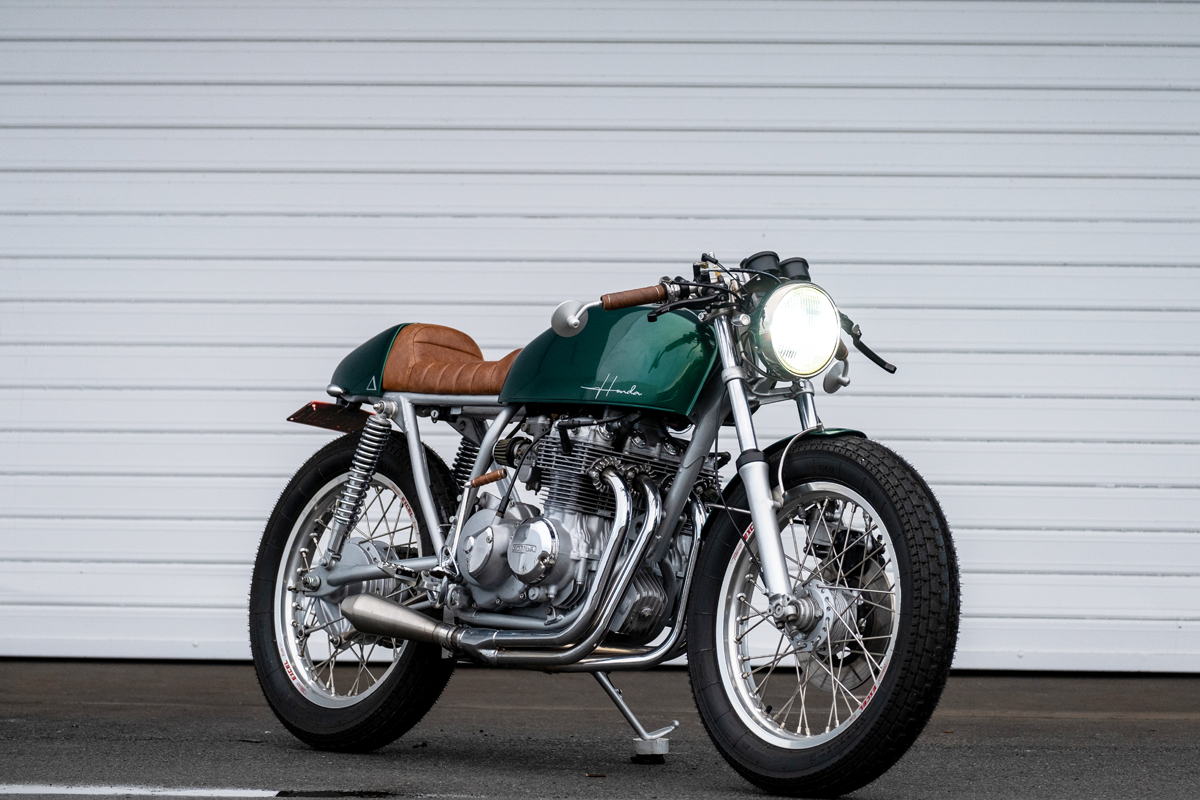 The forks needed to be repaired, triple clamp replaced and the standard bar clamps removed, welded up and finished back to make way for the new clip on bars. The engine and carbs also needed a bit of love. The vintage Honda received a full top end rebuild, carb rebuild and Dyno tune at Dynomite Moto. To make sure it gets the power to the ground properly, we also swapped out the clutch with new plates and heavier springs. With that sorted, the CB400 Super four help up the “Racer” part of its name. Now we had to take care of the styling. 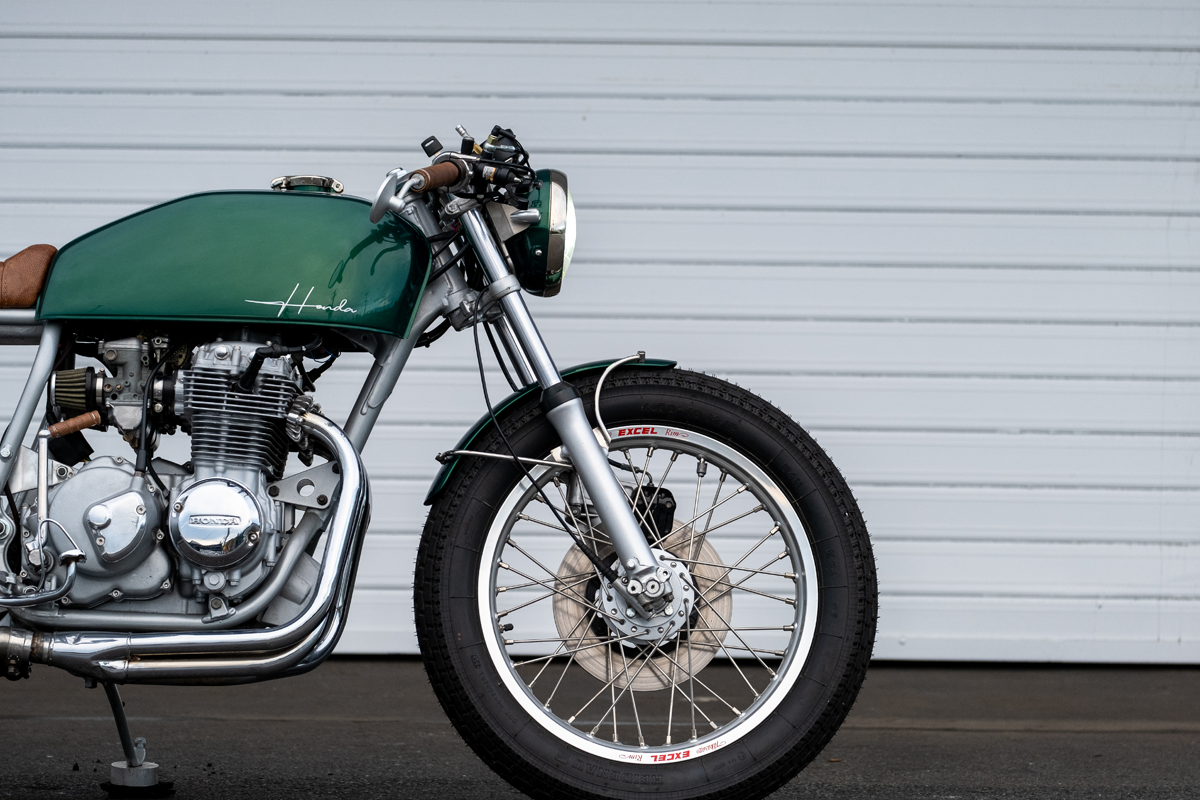 One thing on the bike in great condition were the headers, the old chrome was still great so we gave them a polish and clean up, then slightly modified them to suit our shorty torpedo muffler. The sound out of the small four cylinder is something to enjoy. With the rider getting a mix of the symphony between the exhaust note and induction sounds through the carbs. 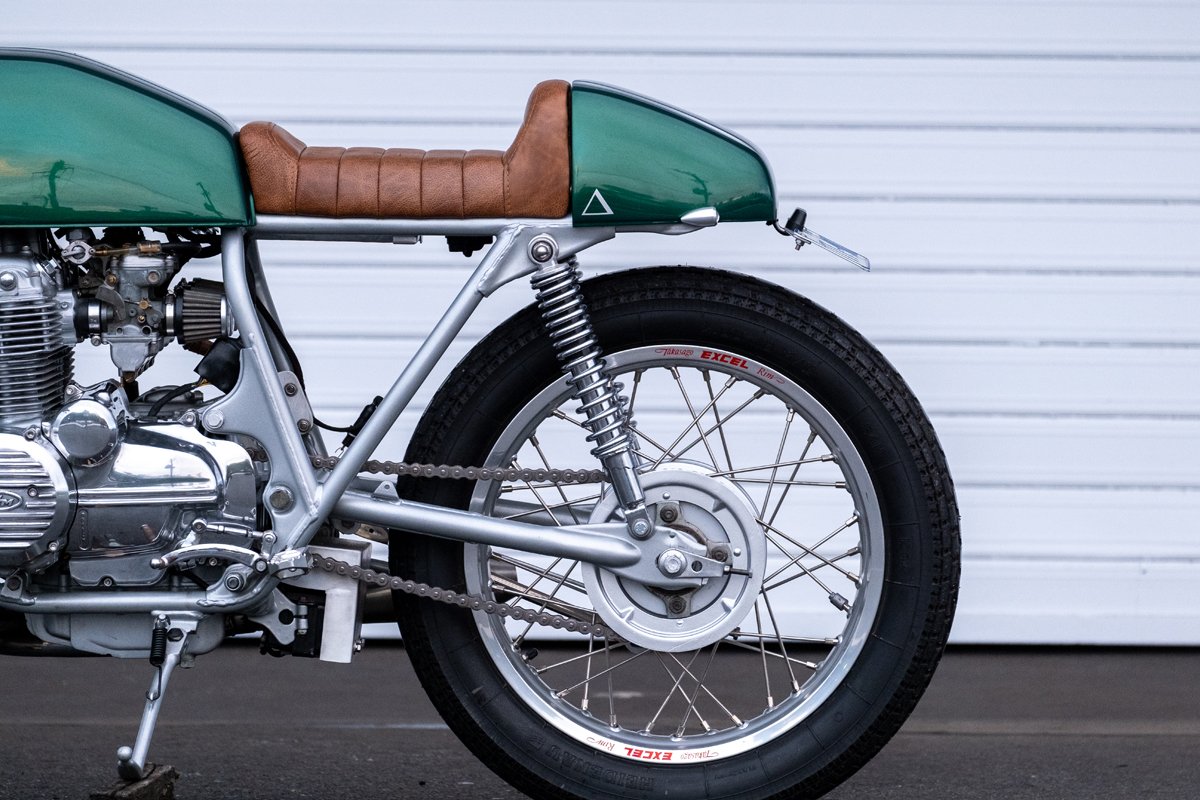 A real stand out on this model Honda, especially in the 70’s was the boxy tank. It makes the CB400 Super Four what it is, so I was determined to keep it. The problem comes with matching a nicely styled tail to it. My mate Justin at Popbang had moulded a CB400 tank section for a tail on one of his projects a few years back. So to save myself some time in trying to recreate it, I just hit him up and bought one. A great call. The pore-fabricated piece was mounted up and we laid in our own electrics tray, and seat pan, using the original keyed seat latch. 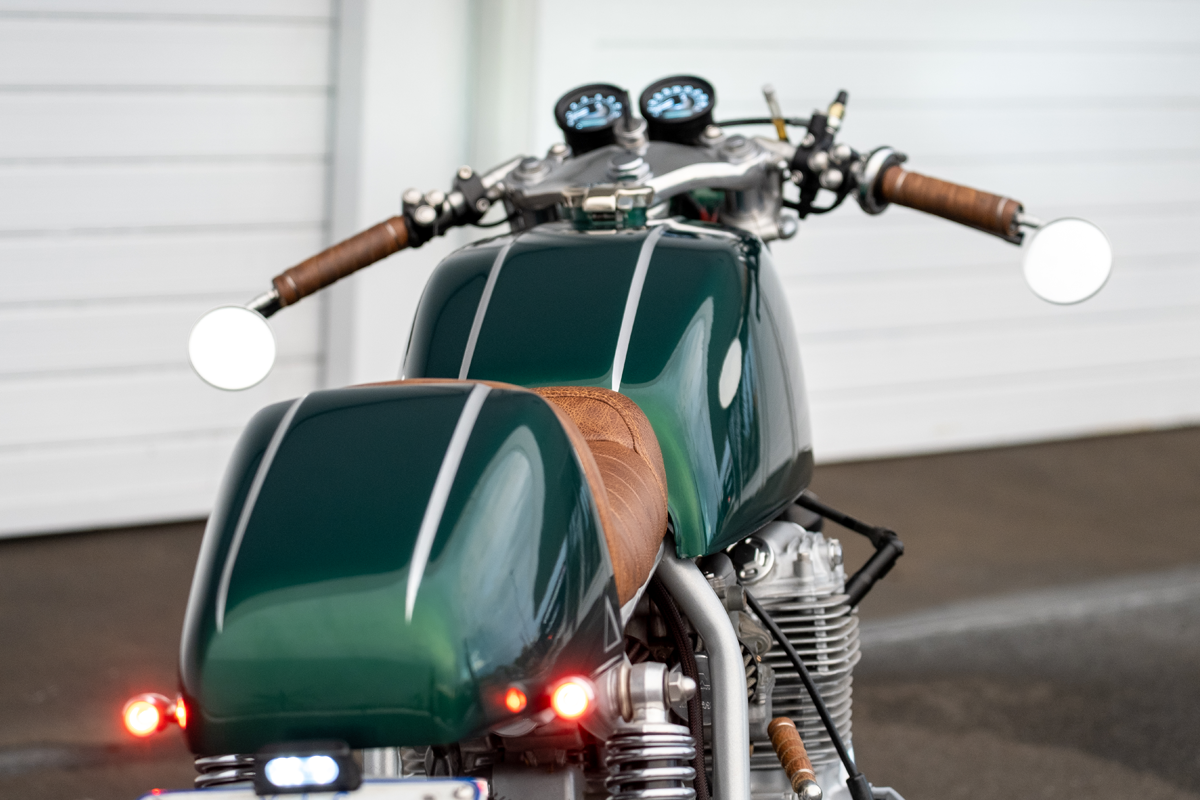 The best part about the tail section is we didn’t have to chop the frame, that’s a first for us. Initially the project was meant to be repaired and dressed up for sale, but when I sent a few photos to the owner he decided it was looking too good to get rid of.
That kicked the project up a gear, so the old tired wheels have been striped, repaired, painted and laced to a new set of polished Excel rims. Widening the front rim to accommodate a bigger tyre. The CB400F sits on a set of Hiedenau classic K34 4.00 18’s front and back. The front fender was fabricated using our Universal fit Aluminium front fender and Mounting kit. A simple, elegant design that carries through the classic styling we wanted on the build. 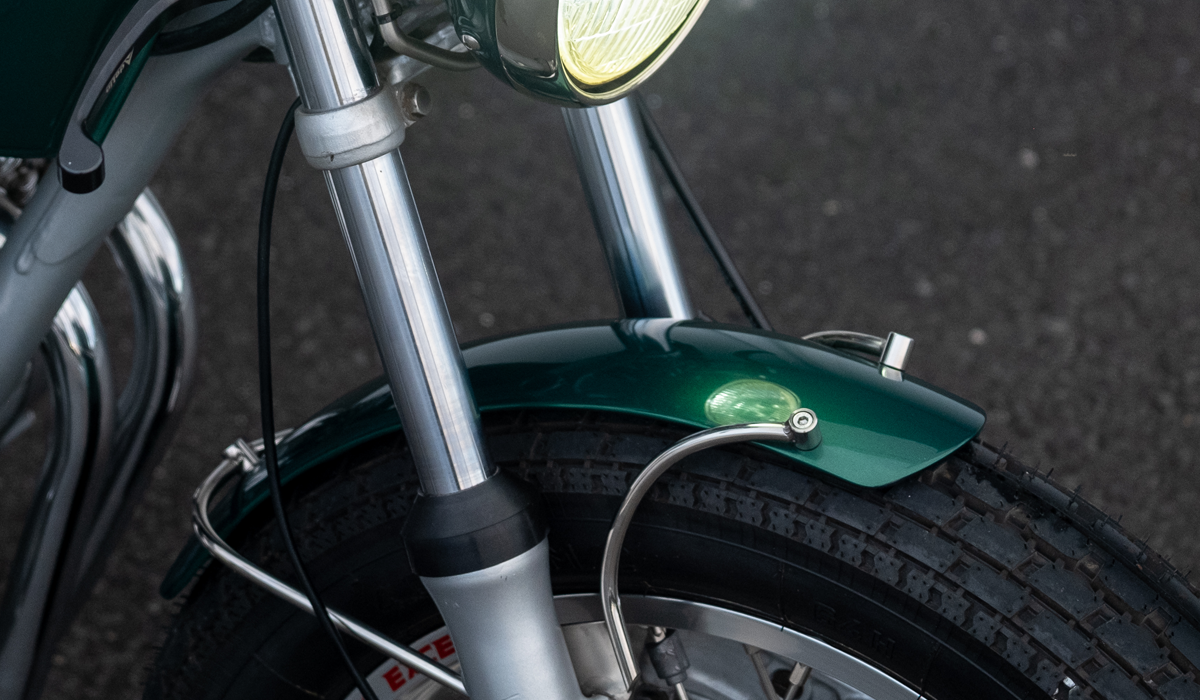 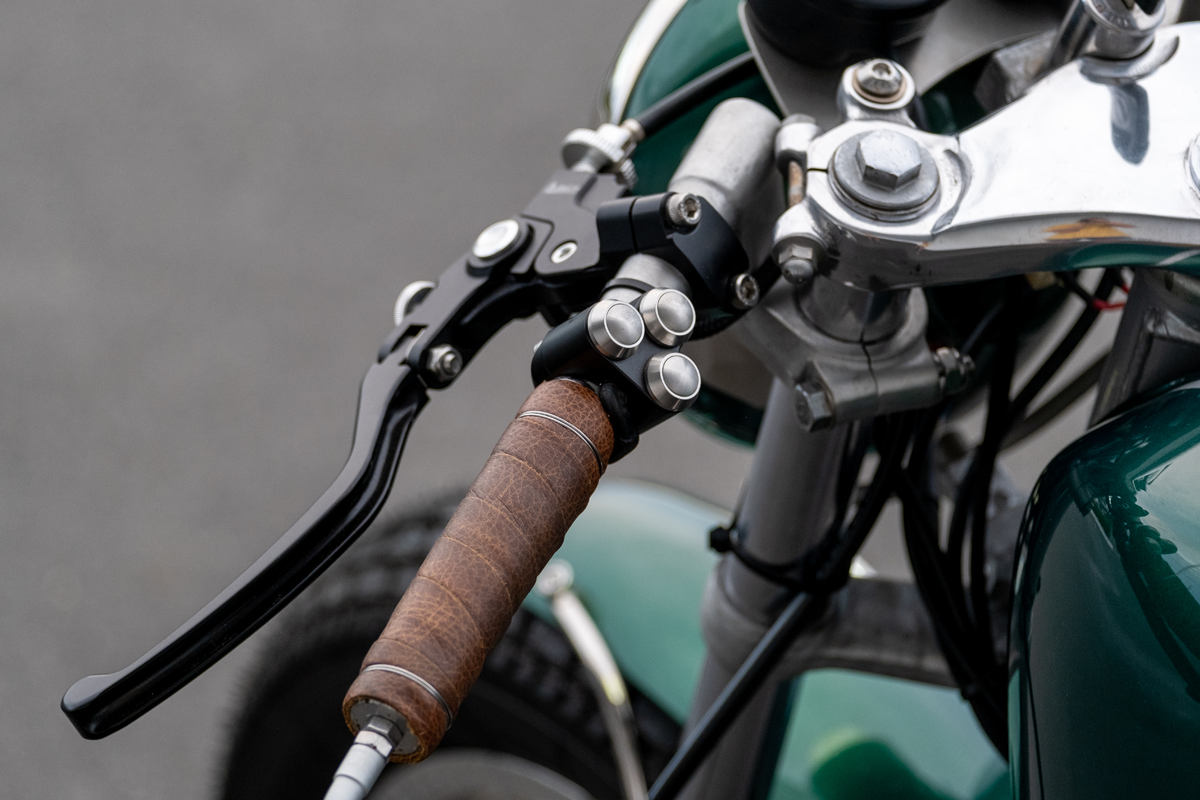 The heavy lifting on the fabrication was all but done, so I turned my attention to the colourway. We maintained the chrome headers and had detailed the engine in a bright silver with a number of polished pieces. The frame I also wanted in a bright silver so I needed to find a colour to compliment that idea. After what seemed like hours, but was probably minutes pouring through colour books I found an emerald green that grabbed me. With hints of blue and gold under daylight the colour looks incredible wherever you put it. 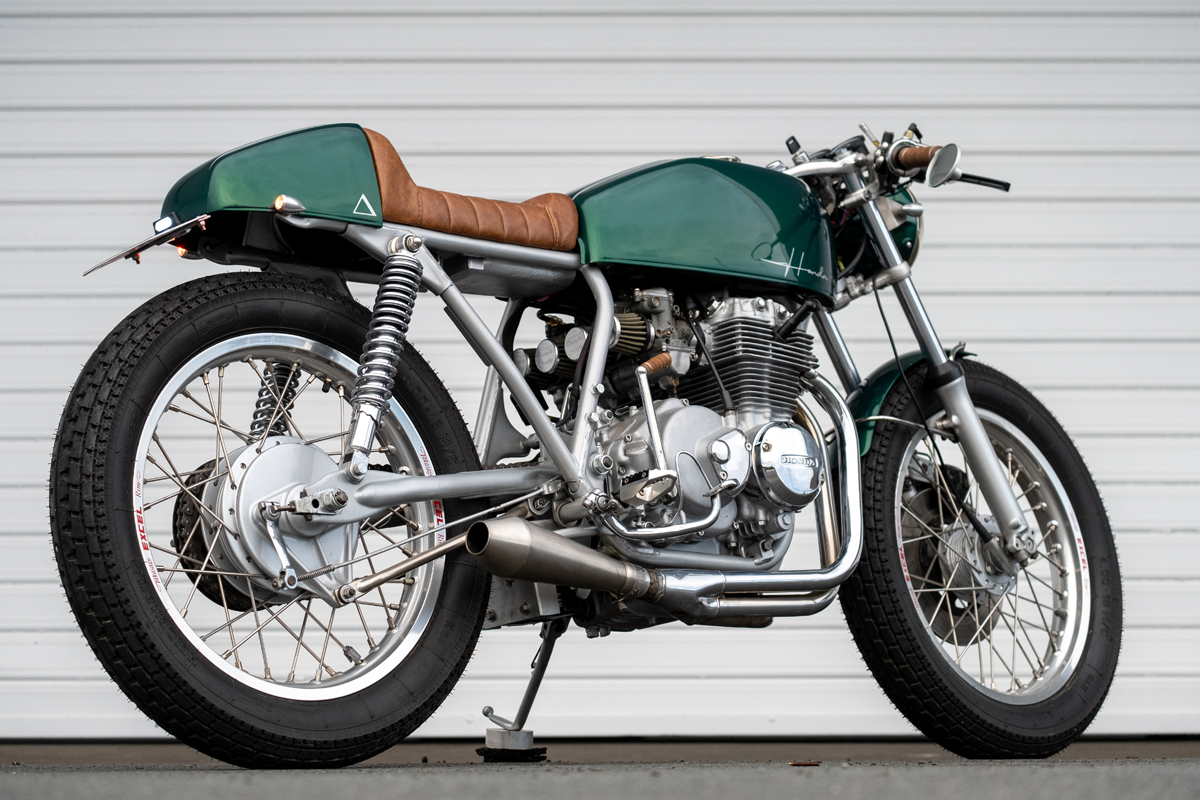 The emerald green would be laid on the front fender, headlight bucket, tank and tail. Everything else would be a raw metal finish or bright silver. Assembling the bike with the freshly coated frame, and new parts was a great process. Simplifying the electrics and including a custom loom for the PBM Black Box module. With everything functioning as it should the tins went on and the bike came alive. Our last stop was at Custom Seat to have the seat trimmed out in an antiqued walnut brown. 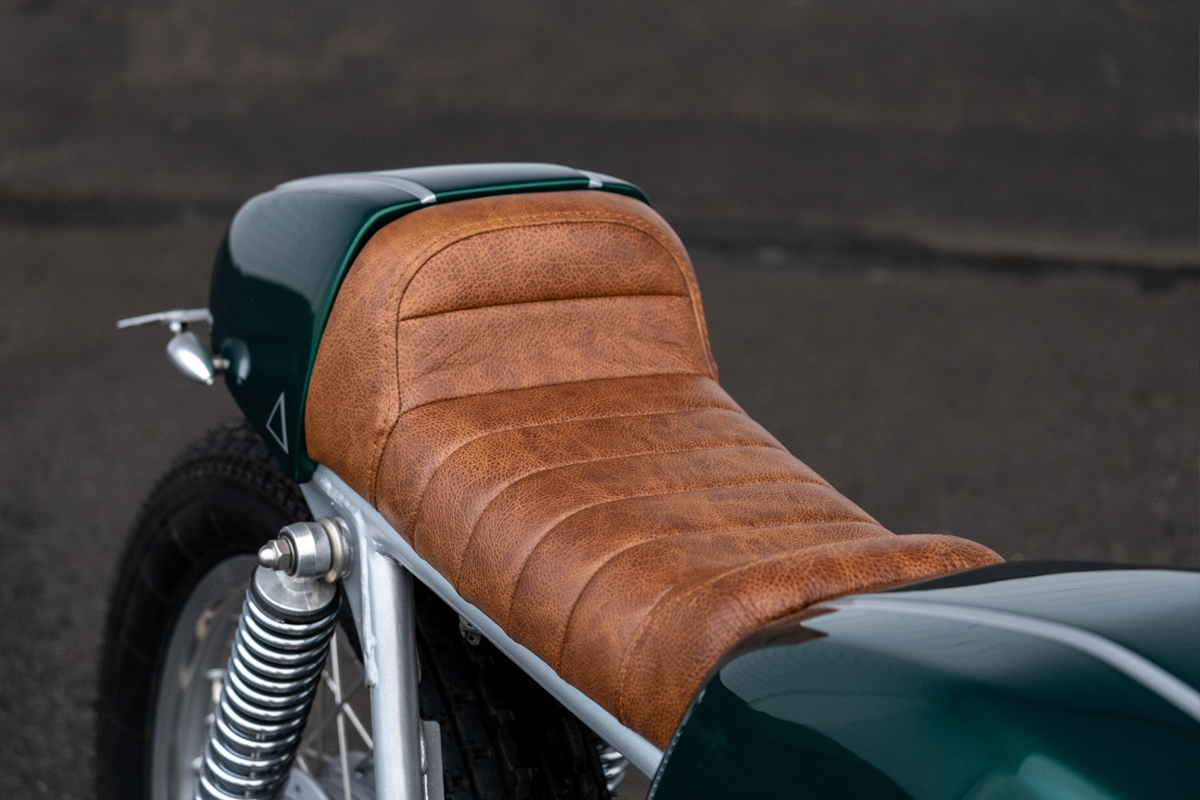 With its fresh motor, new tyres and brakes the CB400F is a real joy to ride. A small carbureted four breathing through a set of DNA pod filters with all its glorious ticks and noises. Around town the Green Honda turns heads on every corner, and once the traffic lights disappear and the roads open up getting the CB400F up past 6000 RPM brings it to life. The engine work done has given the CB400 a great amount of usable power that begs to be twisted out of the throttle. I’ve said it before and I’ll say it again. There’s nothing better than riding a small bike fast.