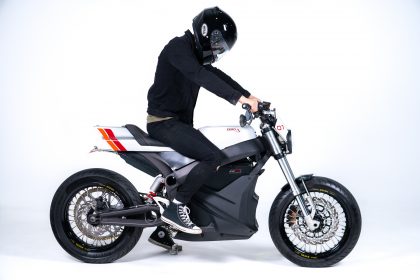 When you mention Electric motorcycles, no brand is as prolific today as Zero. They’ve been a leader in the game for a long time. Producing a range of high performance and commuter E-bikes that suot a range of riding styles. The one that landed in the Purpose Built Moto Garage was the 2016 Zero SR. a sports commuter bike, with a range of 260KM and a blistering 144nm of torque. This thing hit 100km/h in 3.3 seconds. As my first ride ever on an electric bike the experience was pretty dramatic. You’ll see what I mean in the YouTube Video at the bottom of the article No clutch, just turn the key and twist the throttle. After a few back streets and corners, I pointed it down a long straight. Out of a left hand corner, ripped on the throttle and without a thought the bike hit 130km/H before the traffic lights. After that experience I figured Electric motorcycles could be something I’d get used to. Granted, you don’t have the noise or the enjoyment of shifting through the gears, but the effortless and unbelievable acceleration got the blood pumping just the same as any petrol powered machine would.

Then I parked it and pulled it apart. We had a design meeting for Grid Cycles, that ended up getting a little deep. We started talking about what style to make the Zero SR into, tyres, colours, parts….. it was pointless. We stopped that train of thought and changed course. “What do we want to do with Grid Cycles?” was a far more important question. This would inform the build more than any colour spec, or parts list. The answer – “We want to get people excited about electric motorcycles”. I could be told about the benefits and performance specs all day, it wouldn’t get me excited. The thing that excited me about motorcycles is the way they feel, the way they look and the memories I’ve made on them. There’s only a very small percentage that go and buy a bike because it has the absolute highest horsepower, or the faster 0-100 time. That’s not us though is it? Motorcycles are a statement for us, we ride them because that’s our style, and whatever bike we choose has to stir that something inside us, we have more fun that way.

All we have to do is inject a bit of that emotion into our custom electric motorcycles and hopefully people will start to understand what we see in them. So with nothing more than that in mind, we properly started building the Zero SR Street Tracker.

On paper there’s no denying the Zero SR is a great machine, but the styling is a little clinical and commuter-esque. I wanted to simplify the styling, make the bike as functional as it ever was as a commuter and create a little nostalgia. 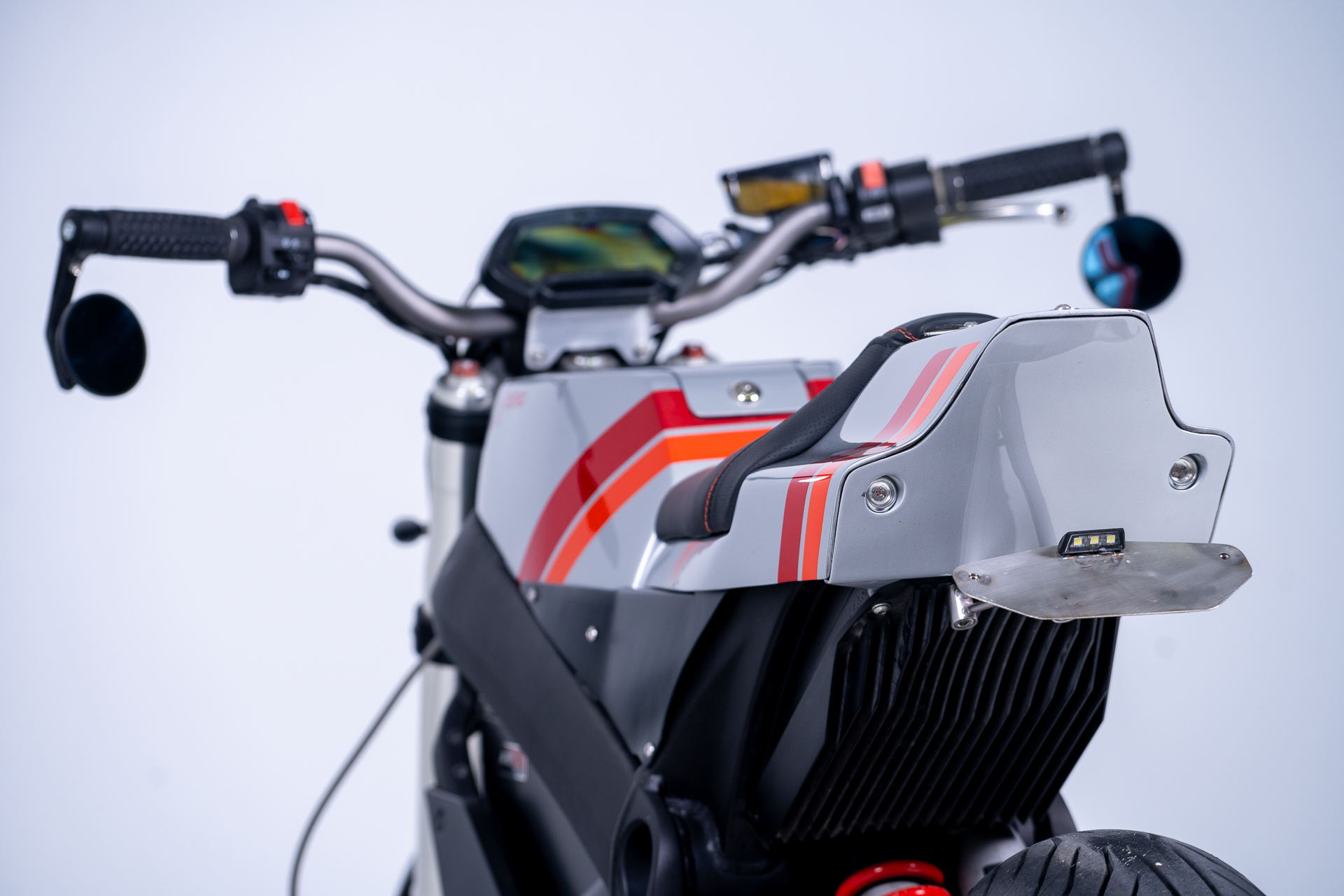 The Zero frames are not the easiest thing to work with. Cast aluminium with a few wild angles that rise from the rear of the power pack to support the factory seat. We had to do a little trimming here and there, but what was left allowed us to start shaping a nice tracker tail for the single seat section. The tail has integrated 3 in 1 LED lighting to keep everything tucked and tidy. The only thing mounted externally on the rear is the tail tidy and plate light.

With the tail shaved out in foam, before we prepped for fibreglass. I started on the “tank” section, or probably better referred to as the glove box section of the Electric tracker. The stock Zero bike had a hollow section with a soft bag mounted in it, that could also be swapped out for the upgraded power tank. I wanted to keep that utility but make it look better. 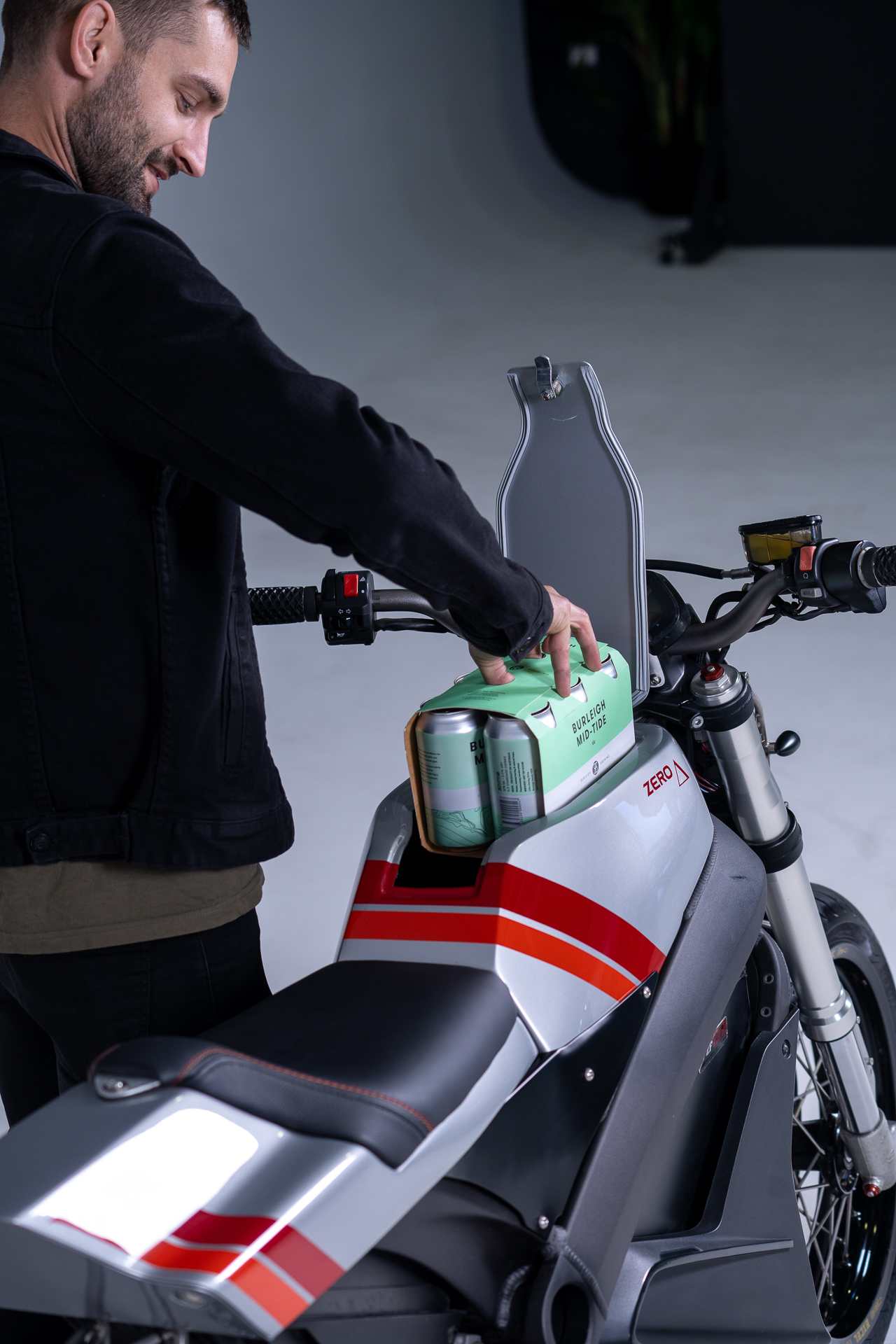 I started carving shapes out and landed with a slim and boxy tank. It spoke the same language as the tracker tail and worked pretty nicely with the rising angle of the twin spar frame.  The tank has a lockable hatch to allow safe storage of whatever you want to thrown in there. To give you an idea you’d probably fit a 6 -pack of bottles and maybe 2 cans of beer in there. A measurement of volume I know you’ll all understand.

On the front end, the Zero electric tracker received a set of titanium grey Pro Taper bars, with a new bracket to mount the Zero Digital dash front and center. The lighting was swapped out for some Purpose Built Moto Hardware. 5.75” flashpoint classic LED headlight, a set of hollowtip turn signals, all mounted up on a custom stainless bracket. The body work was brought into the front section with a sleek aluminium headlight shroud. 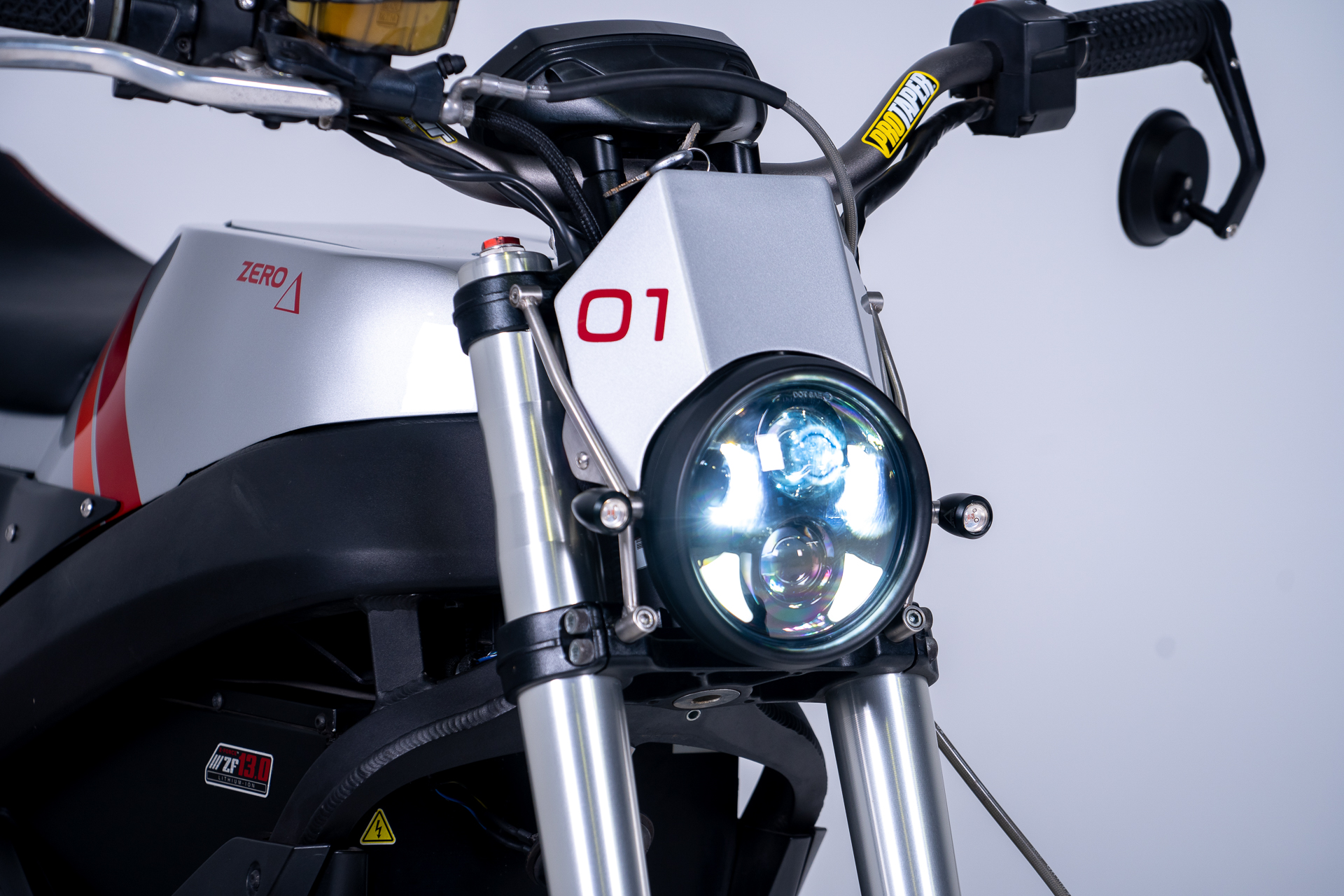 The Zero wheels have been swapped out with a set of lightweight aftermarket hubs, wrapped with Excel rims, motard sizing. 17” x 3.5 front, 17” x 4.25 rear. Along with the trimmed aluminium front fender this was a style choice. The spoke wheel set brings in that tracker element a little more, but sticking with the 17” rims, made sure we could run Pirelli tyres that would fit what this electric power house was putting out.

The Zero Street Tracker also had a chain conversion completed. Not a simple task on this electric bike, but worthwhile for the style I was chasing. I’ve seen a lot of Zero owners doing the same thing as the thin belts used from factory tend to cause issues if you decide to get adventurous down some dirt roads. The huge custom sprocket also looks pretty bad ass!! 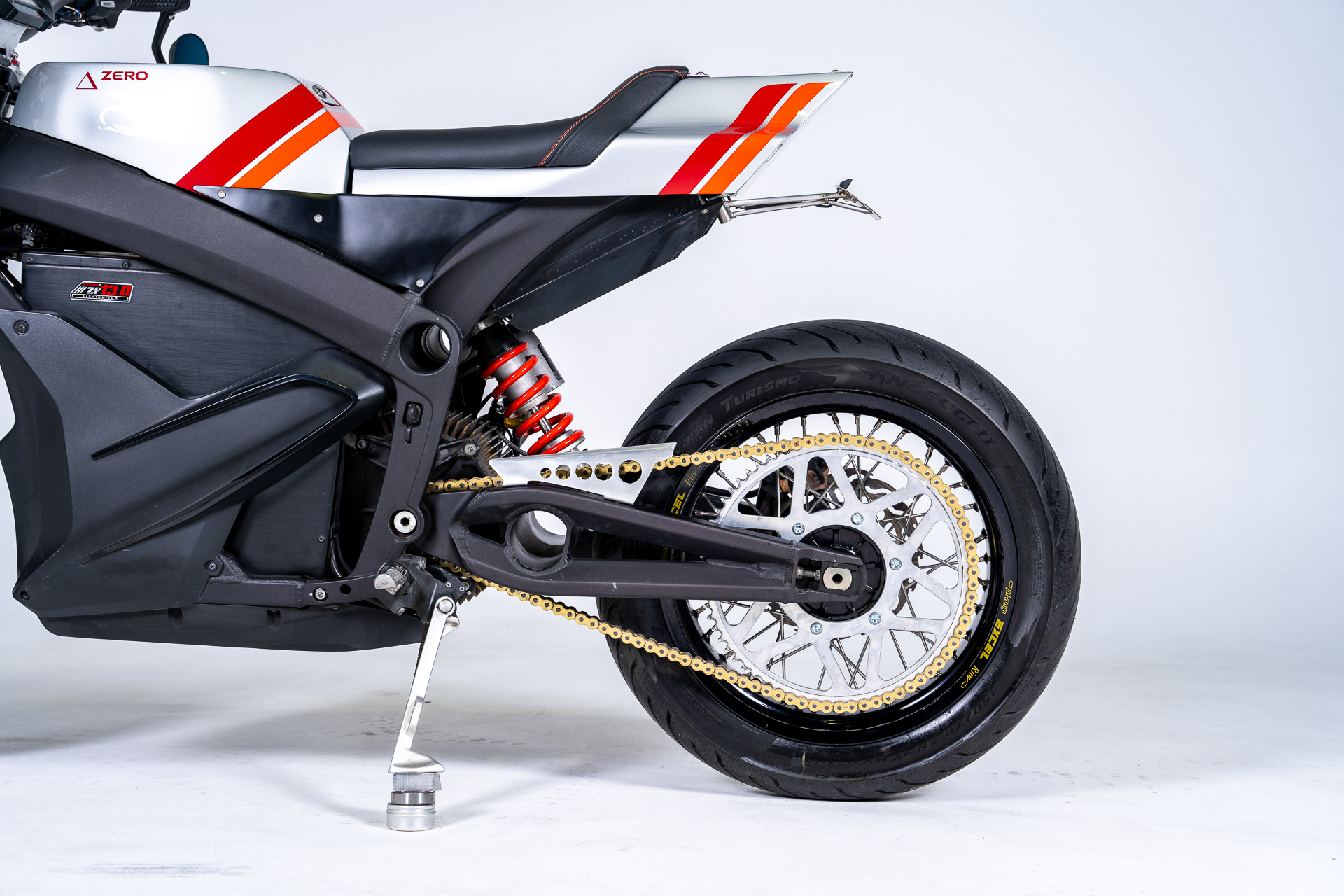 The custom body work is finished in a striking silver detailed with illustrious shades of blood orange and red, some 70’s tracker nostalgia creeping in with the stripe colours for sure. Complimented in a napa leather seat.

Rolling off the bench this bike had a lot less of a checklist than usual. No tuning, clutch adjustment not heat cycles, just a torque check, chain tension, charge, turn the key and go! 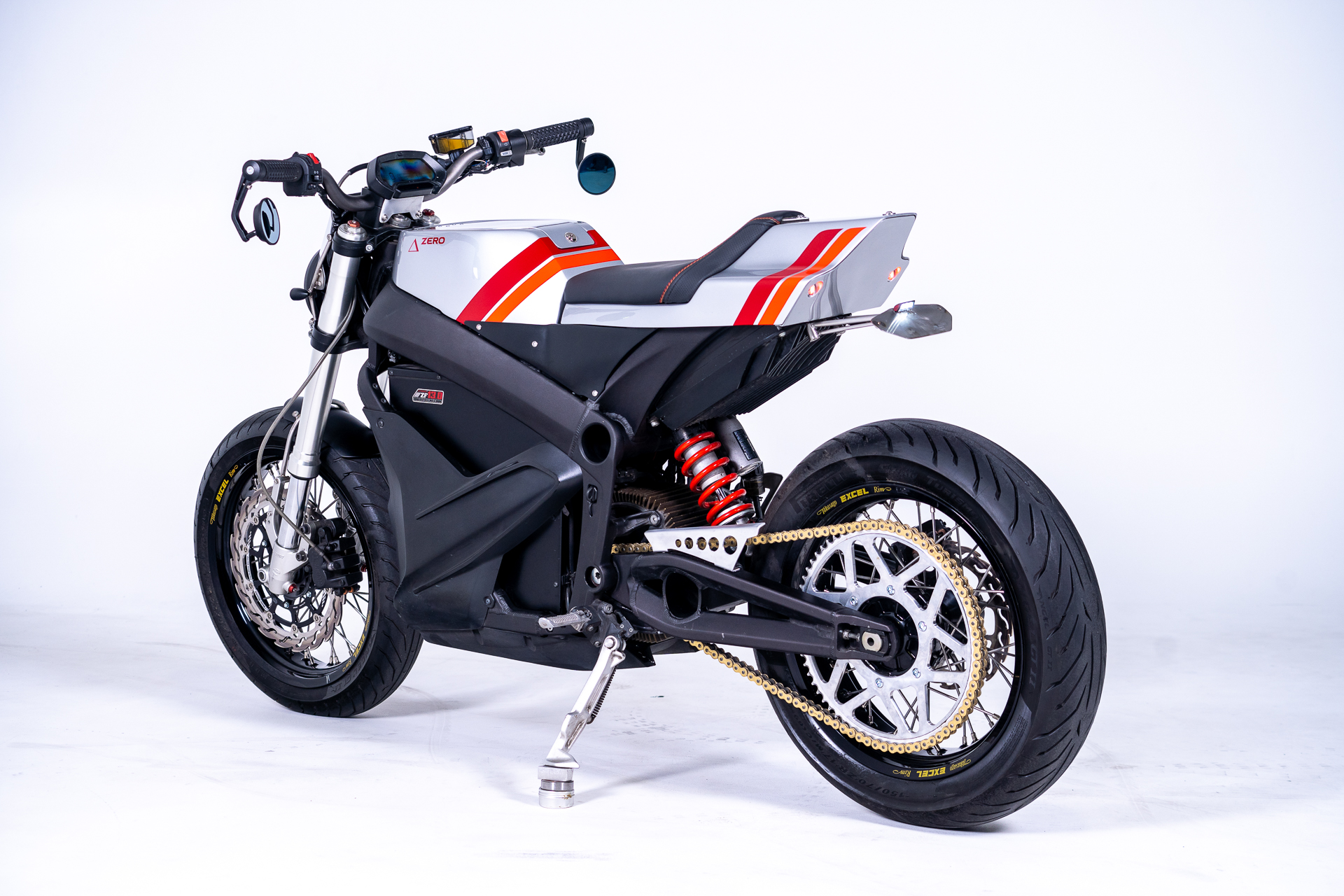 The Zero Electric street tracker always had the performance, but now it has the style to match. with this being the first of our custom zero’s to hit the street I’m looking forward to progressing with Grid cycles to see how we can re-imagine the new models that will be landing in January 2022.

If the electric bikes are peaking your interest, get in touch with us at Grid cycles and lets talk about electrifying your ride!