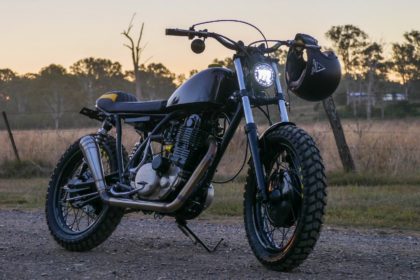 ANOTHER SR400 Scrambler, Fuck me!

These bikes have nearly been done to death, but there’s still new ground to cover here, I’m sure of it. Stick with me as I run you through the process on this SR400 Scrambler that came to me near on falling apart, and now looks like something that could take you through a zombie apocalypse. 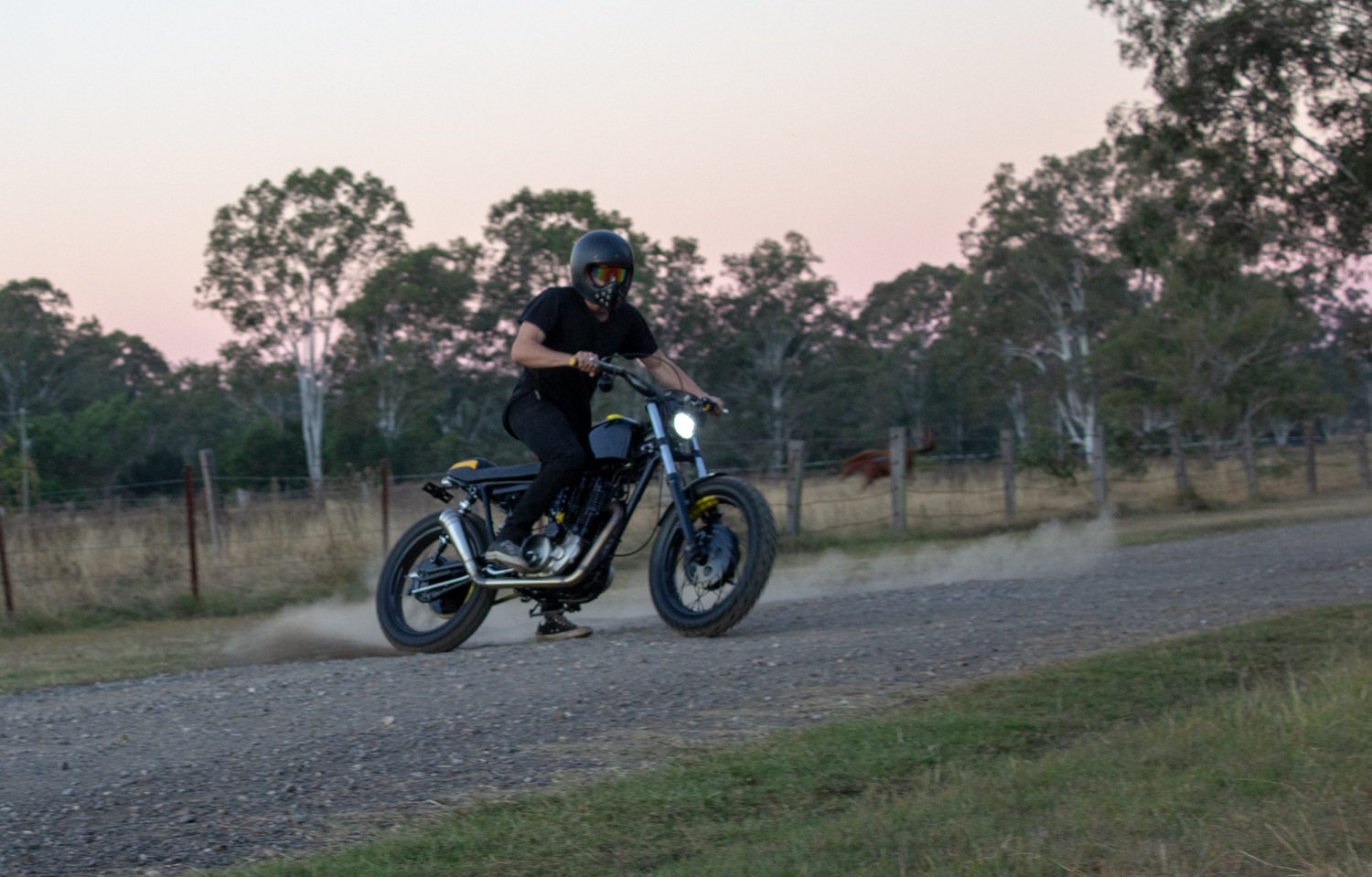 Julian is from Far North QLD, a region not known for its soft men, and tranquil weekend rides. North Queensland is known for some of the Harshest off roading in Australia, and the people can be just as rough! (sit back down I’m kidding)  When I was asked to deliver a Scrambler that was going to be used to “Take a shortcut to work” I figured that shortcut wasn’t going to be through a manicured park land. Most likely a -through the neighbours yard, into the bush through the mud track and up a rocky hill- sort of short cut. So the bike needed to deliver. 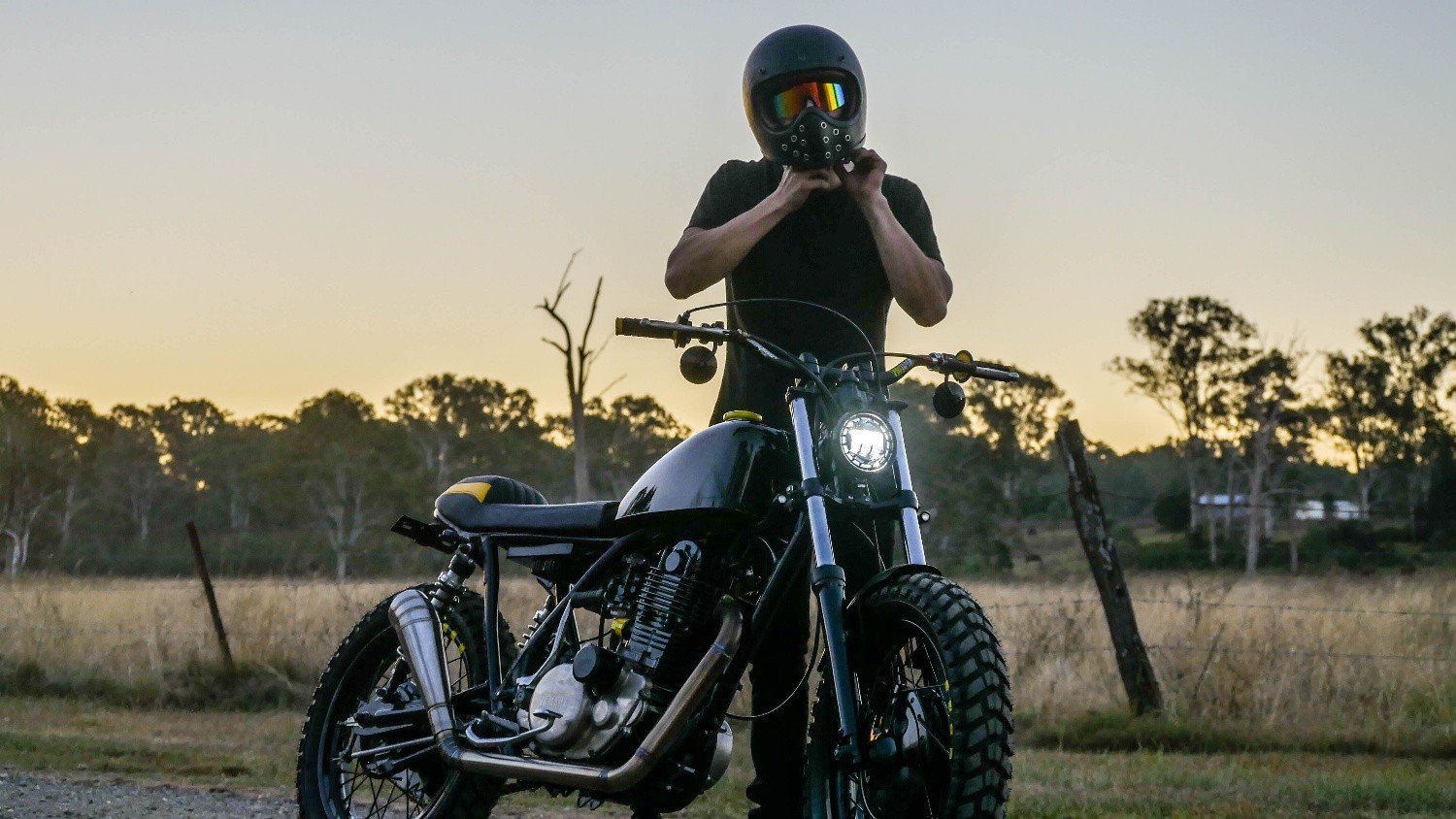 I was left to my devices on the SR400 Scrambler style and wrote my own brief: 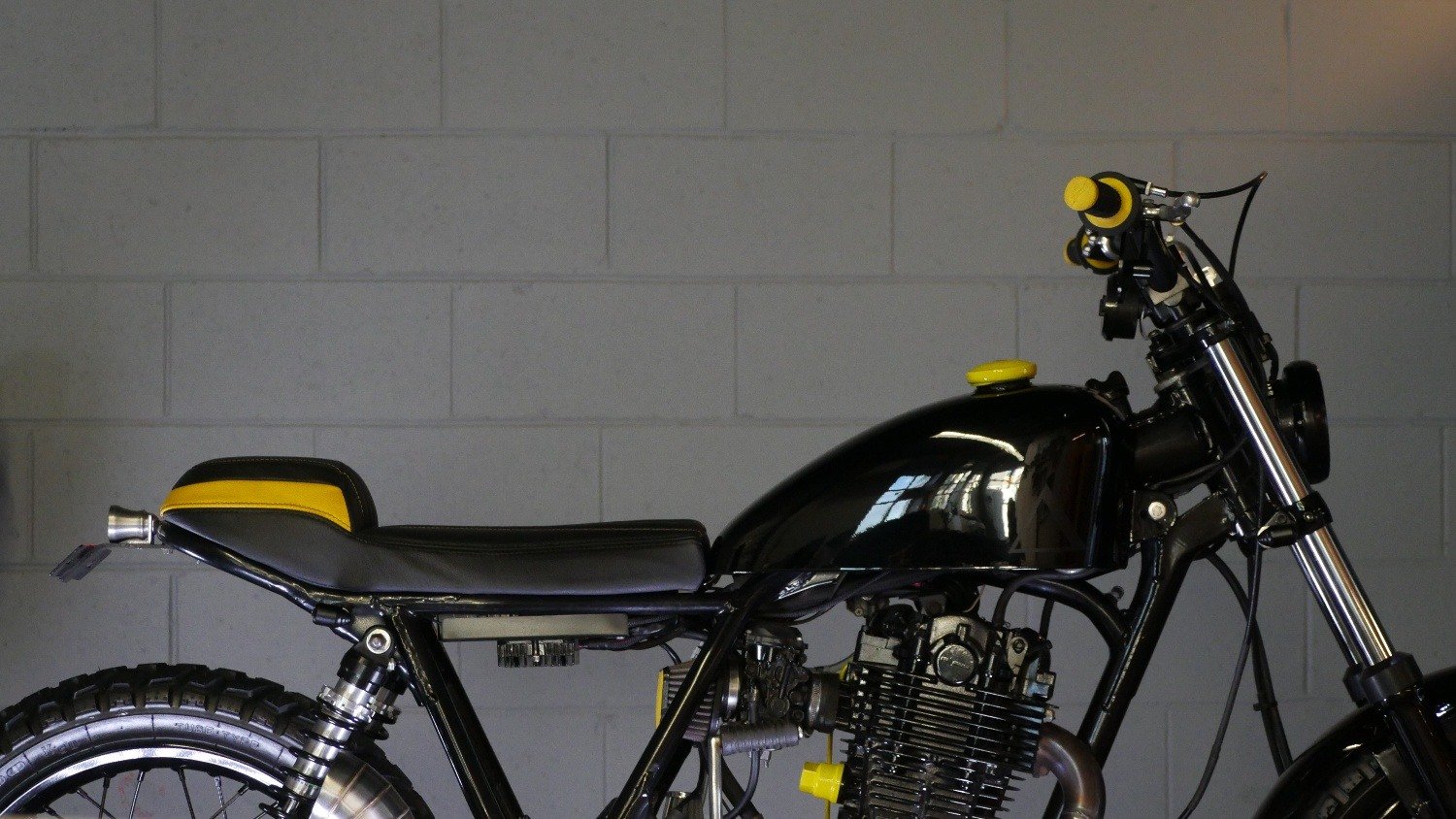 The SR400 was retrofitted with a Sportster peanut tank, At first I wasn’t sure if I could pull it off but I decided to throw it against the wall and see what stuck. Repairing the angled tail hoop and some rust damage, then shaping the seat soon bought the feel of the bike together. Having a soft seat hump in our design but keeping enough room to shift the riders weight if needed was the idea. I then went to Jamason and we sketched out a Black/yellow upholstery pattern and I let him at it.
Finishing off the tail with a minimal plate bracket and tail light set up and fitting the indicators to the subframe. That was the overall silhouette of the bike done, now to dig into the details.
I had an idea for the wheel colours so that was next on the list. The wheels were cleaned, trued up and sent for paint using a 4 stripe Yellow on Black design. 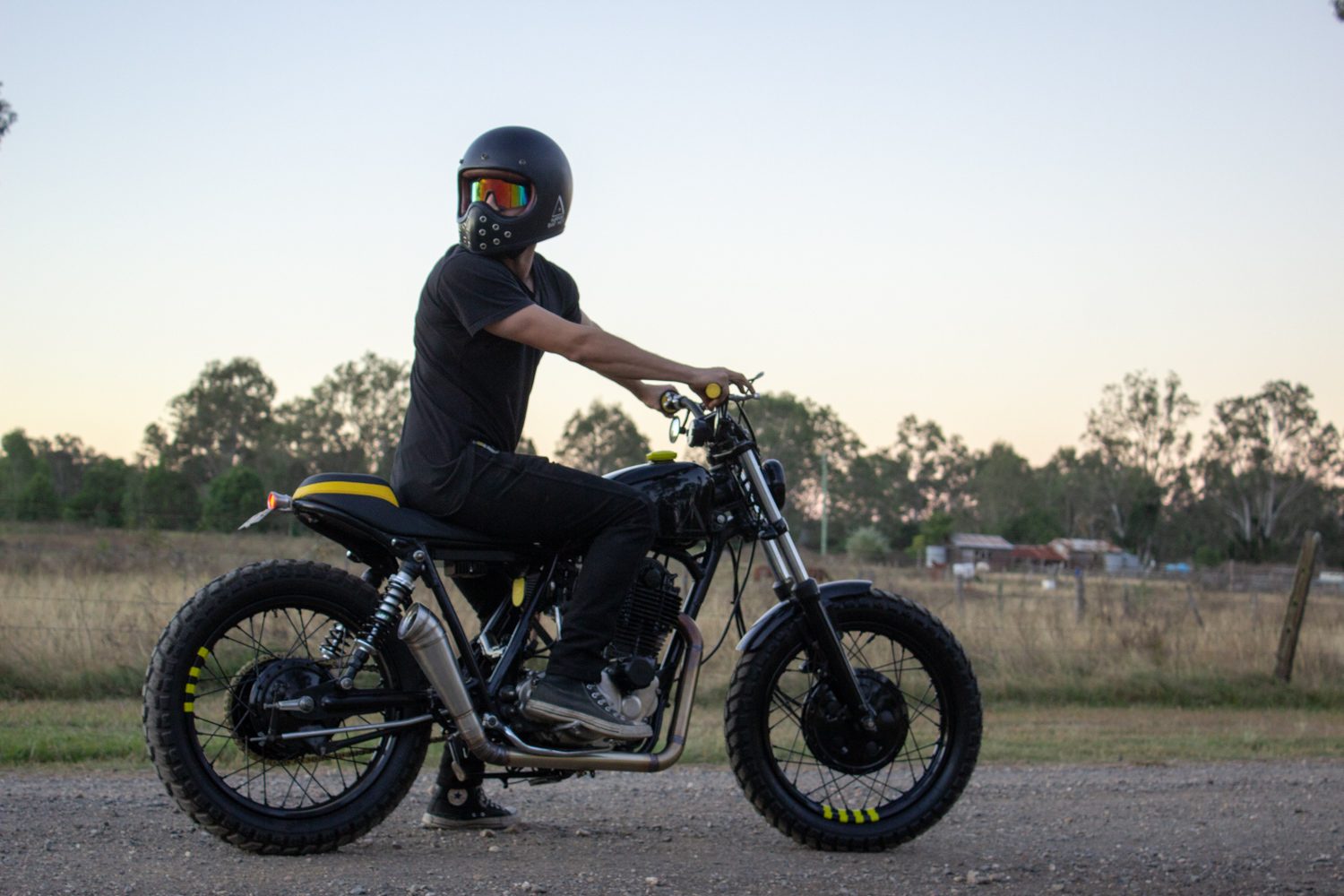 While that was happening, Jamason and I stripped the bike and started painting and polishing. Jamason took care of cleaning and painting the motor while I rebuilt the carb, re-finished the cases and trimmed the sprocket cover up. The forks were also rebuilt and slightly stiffened to suit the raised up Gazi rear shocks.

Wheels came back and time for tyres, you know what I’m going to say here…. Heidenau K60 scouts. I can’t move past them! Grippy off road, corner well on road, and they look fucking amazing. So yeah I used them again, shut up. 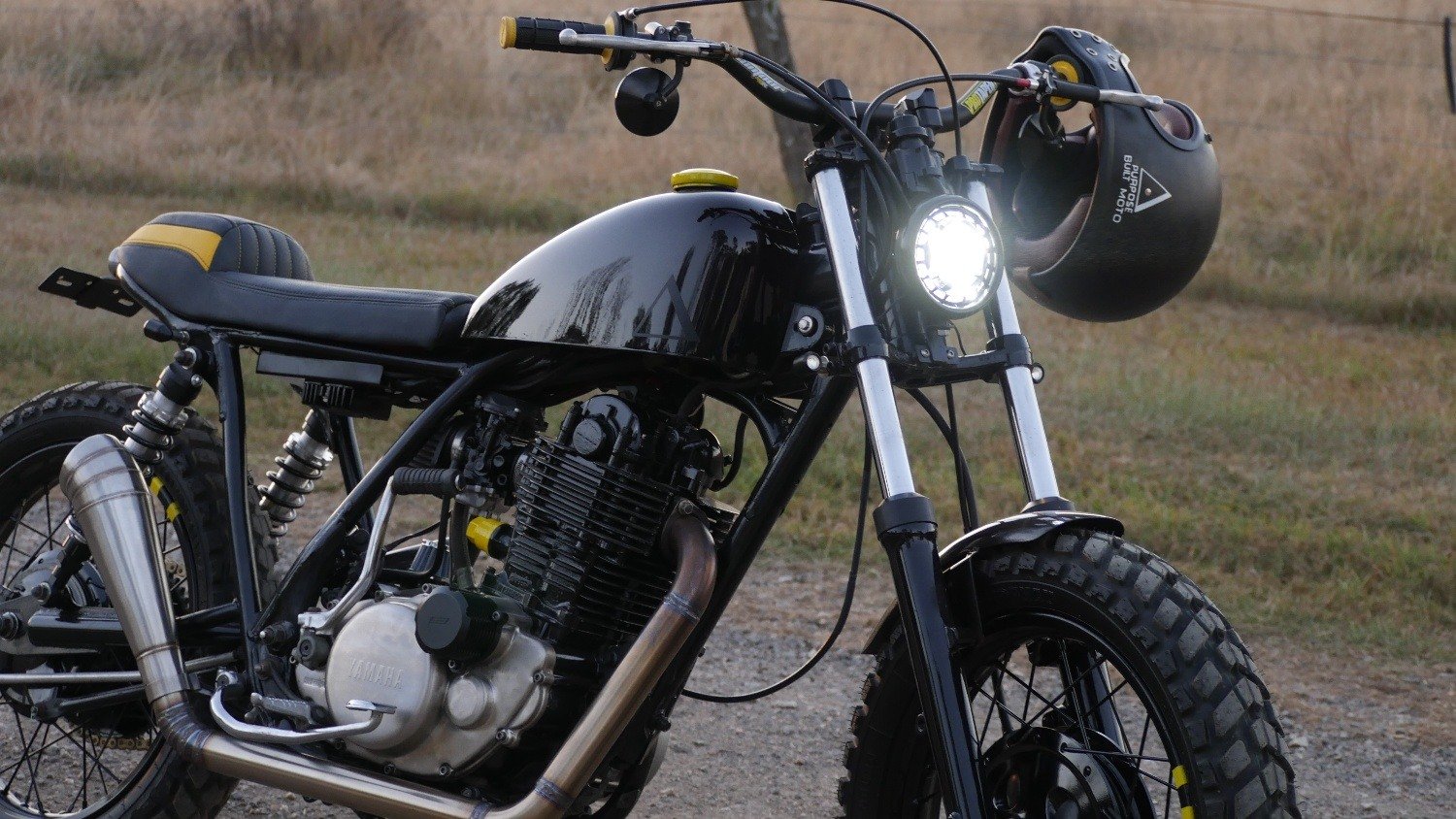 Seat, tank, suspension and pegs were set, the last thing to think about in regards to rider position now was the bars. Usually I’ll use a pro taper MX bar, set at the OEM bar height, it felt a little off here so they were raised up about 50mm with risers which gave it a more “choke that bike” feel. 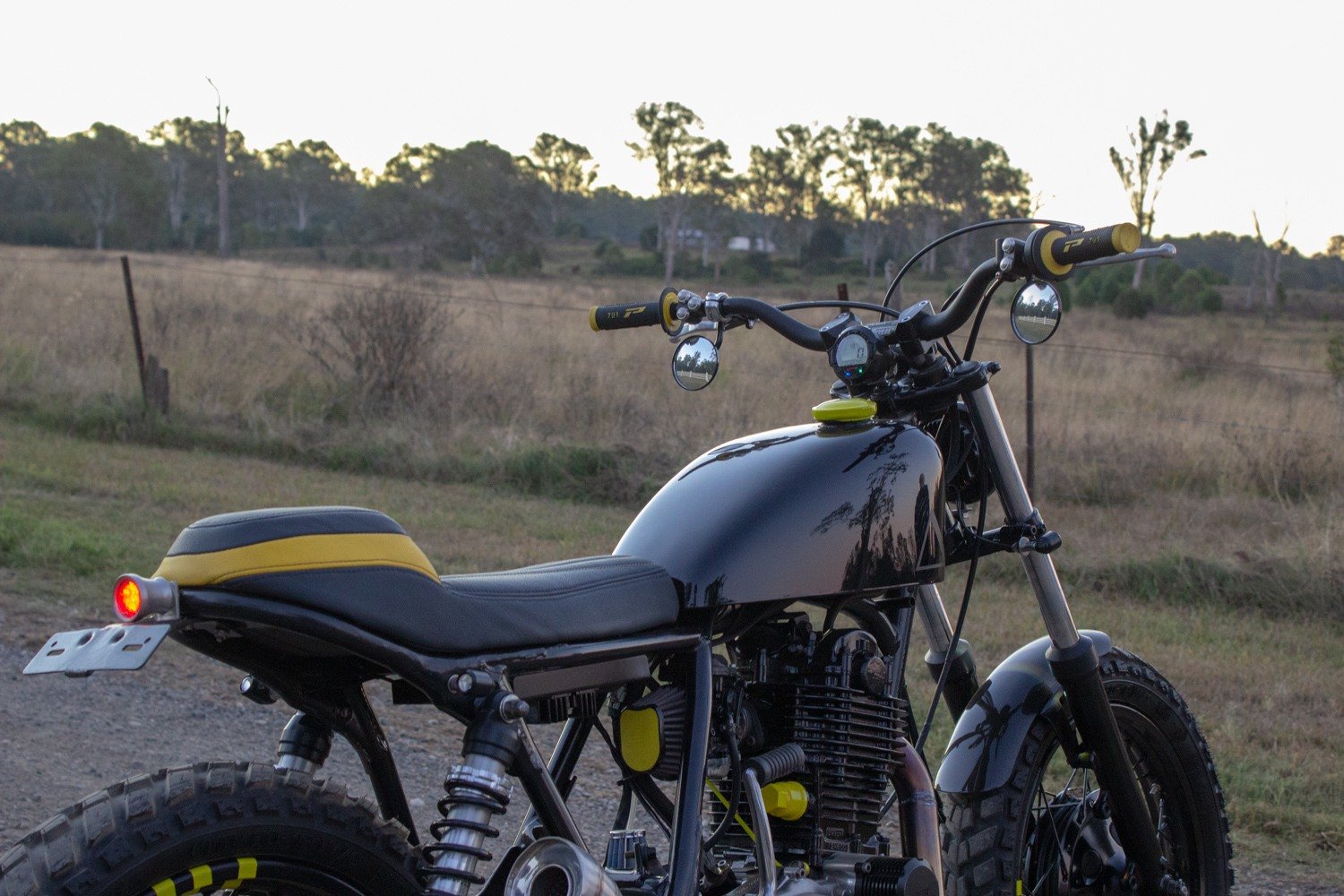 I had intended to use the original header but taking off the old heat wrap quickly changed my mind. Here’s a reminder for those thinking about heat wrap.
** if you cover a shitty set of pipes with heat wrap, they will always get worse. Never better**

If you’re 100% on using it at least remove all the rust first and re-coat the exhaust before choking them in the wrap of death. Anyway, the header had shit the bed, I’d only ever made 1 exhaust before, so I decided to sack up and have another go, stainless tube and elbows were bought, welded, sworn at and thrown against the wall. But after all that you got a handmade exhaust, with some nice raw welds and heat sigs on there that set the bike off! Wide open, elbows tucked gives you shivers on this thing, especially with that big single piston pounding out the Purpose Built Moto Highball muffler. 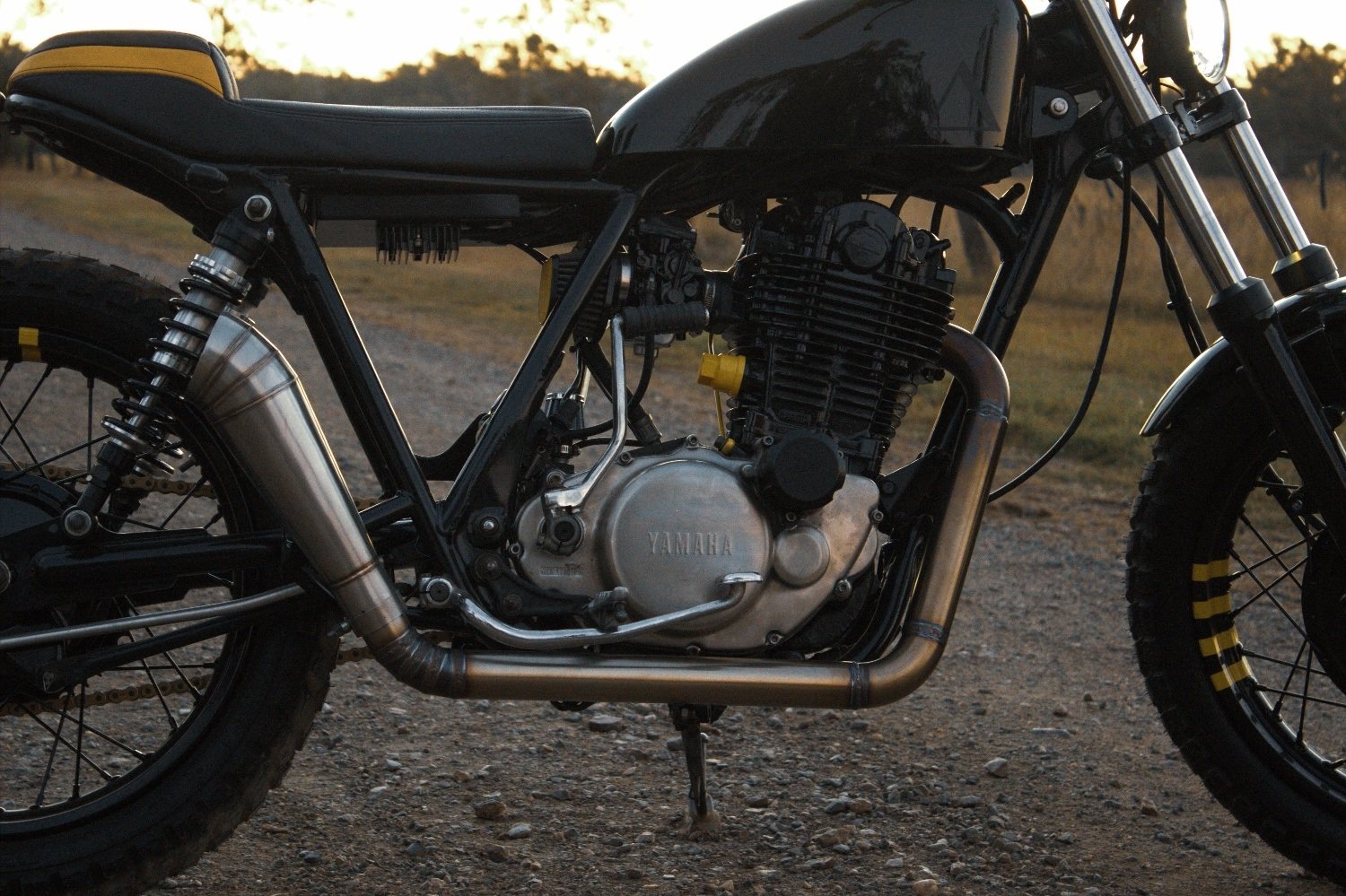 To make sure the intake was keeping up with the new exhaust, the carb was re-jetted to suit that pretty yellow DNA pod filter, and keep that motor humming! 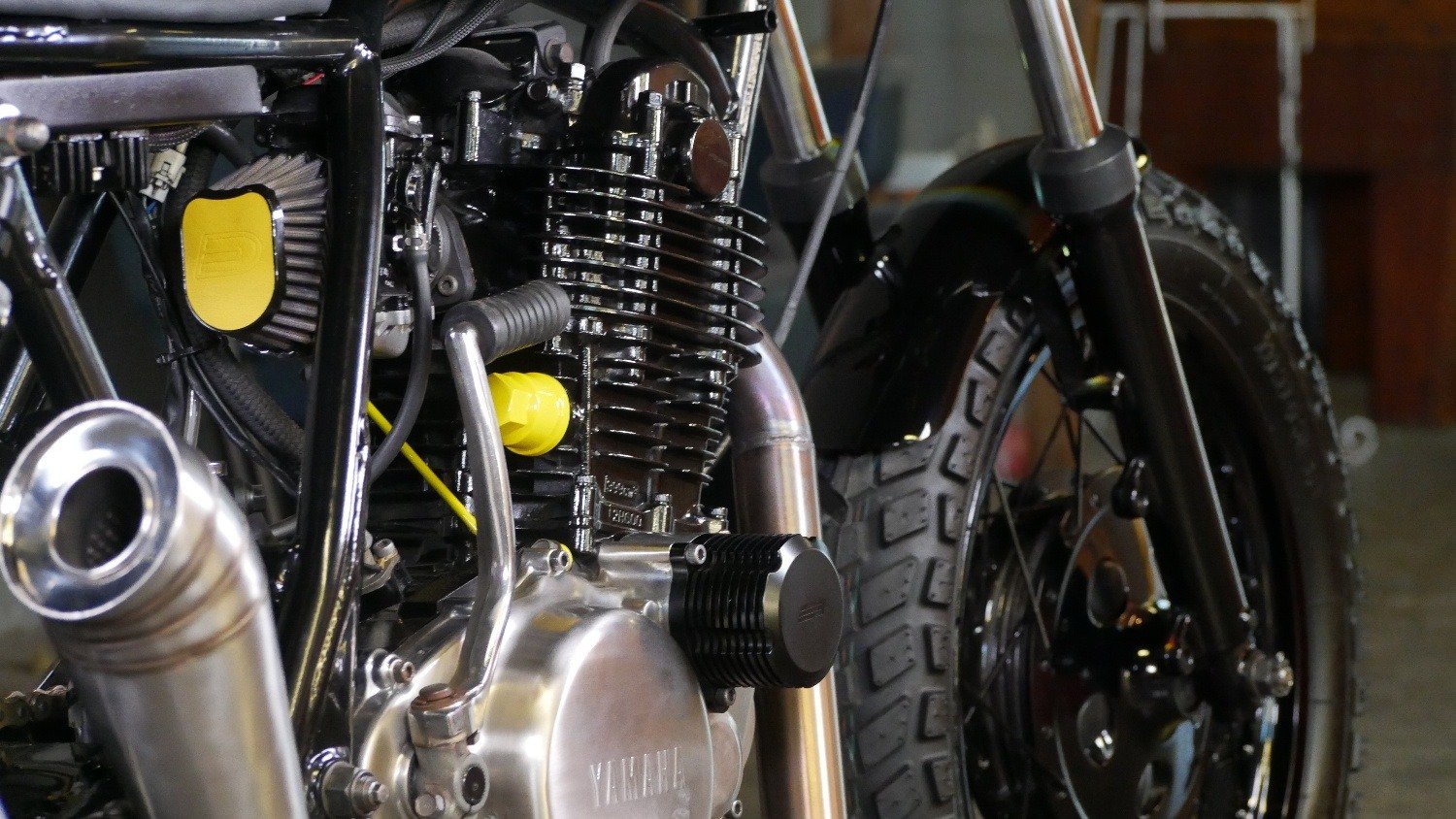 Now I’ve held out on talking about that front end, but here it is… that tidy little unit that’s lighting up your life and sparking your imagination, is the Purpose Built Moto 4.5” Flashpoint Classic.
A more rounded + soft design than you’re used to but you’ll see these available along with the new 7” flashpoint classic in the online store!

The 4.5” headlight is amazingly minimal, and while it doesn’t throw as much light as its bigger brothers it still holds its own in terms of brightness. Complimented with a tiny digital speedo, and our Black beehive LED indicators, without looking closely it almost seems as if that front end is totally bare. 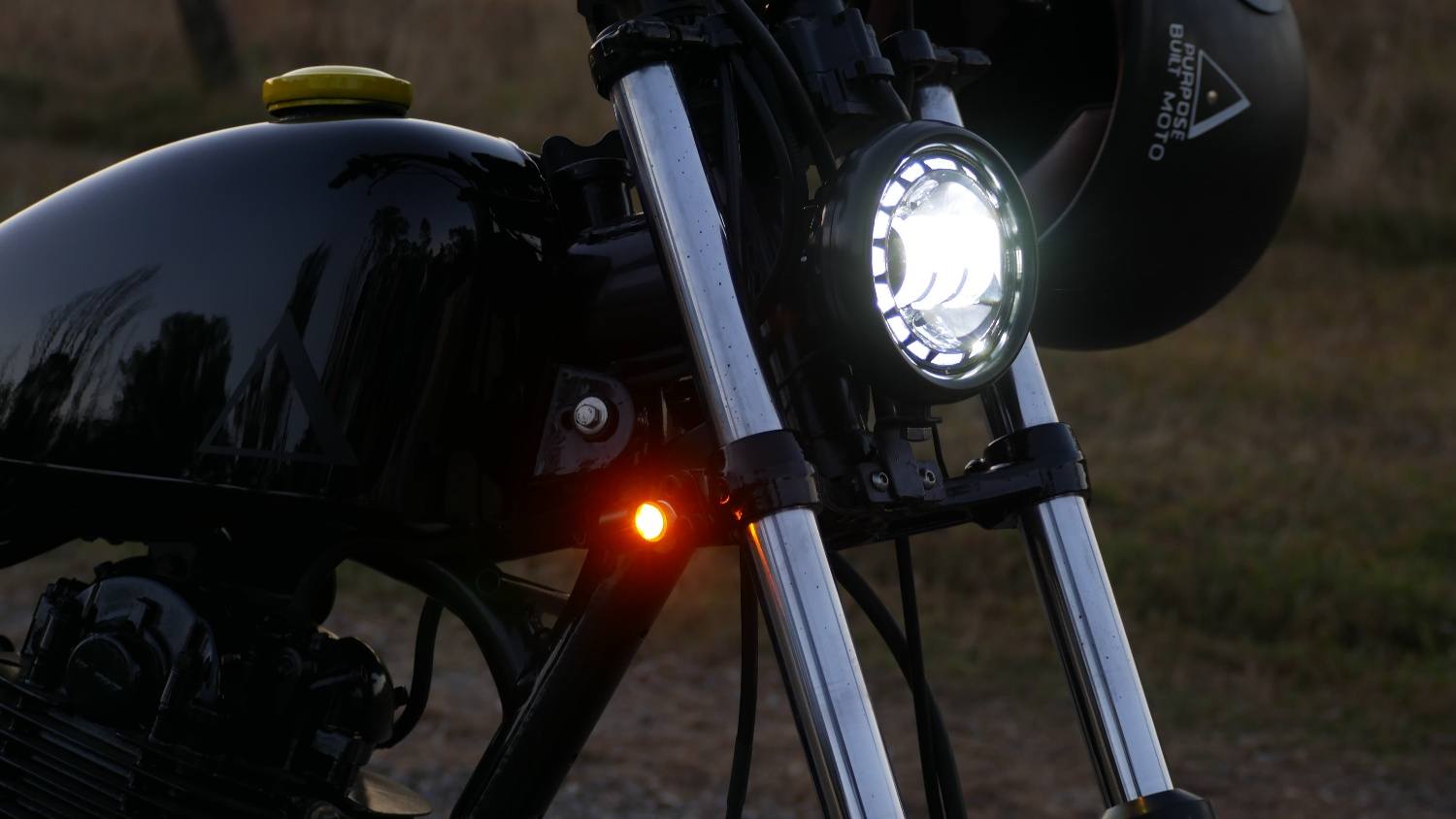 When piecing the SR400 Scrambler together, I was very careful to not go overboard on the yellow, a few hints here and there, mixed in with a contrast of High Gloss and Matte black. Once my mind was set on the colour the last detail was the tank being subtly badged with the Purpose Built Moto Delta. 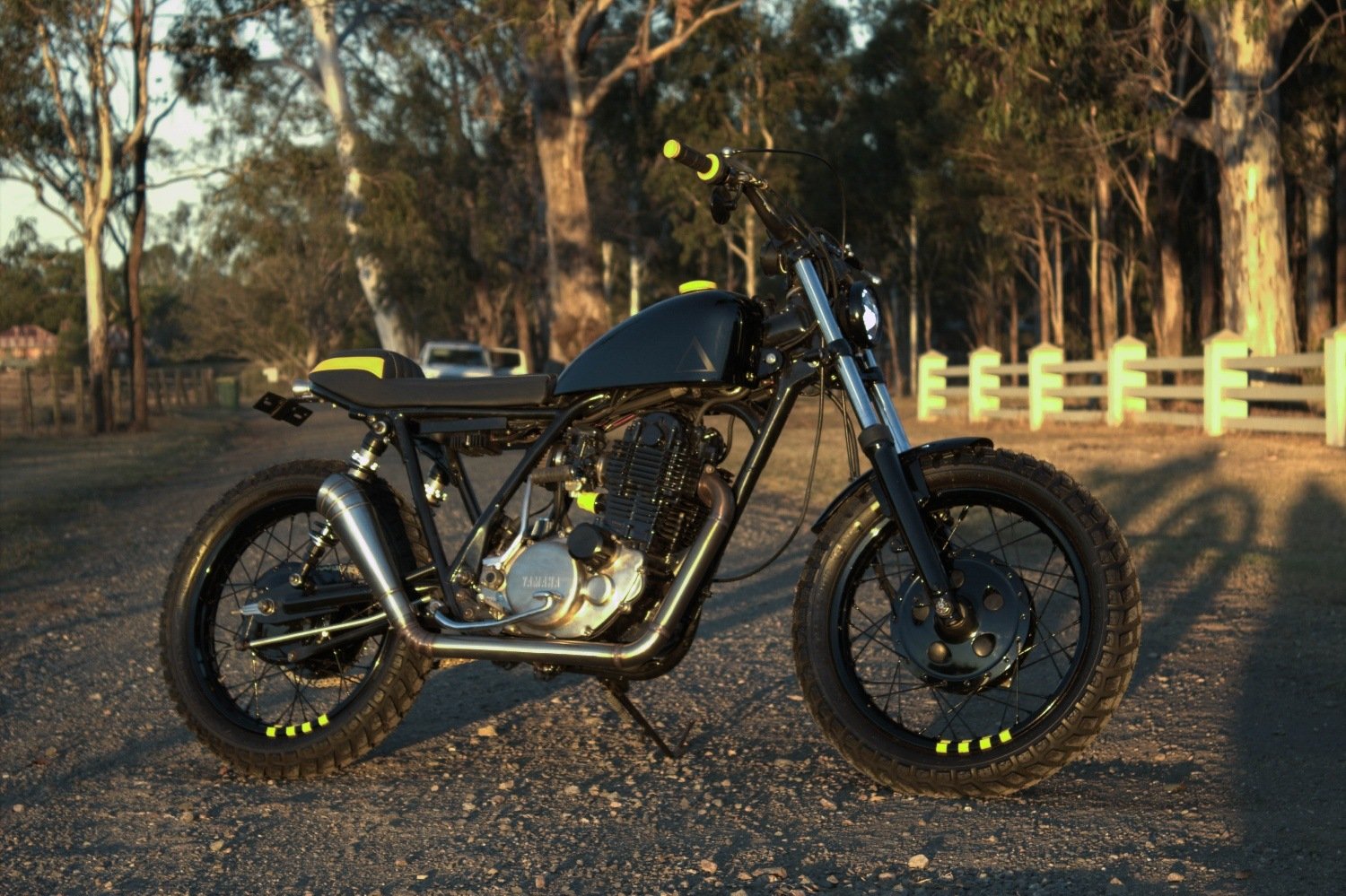 The SR400 scrambler is now in its new home in North Queensland, hopefully getting dirty every weekend and delivering as much fun as the rider can handle. Want to see this bike in action?

Check out the full gallery of the Yamaha SR400 completed

Check out the video of the SR400 Scrambler build