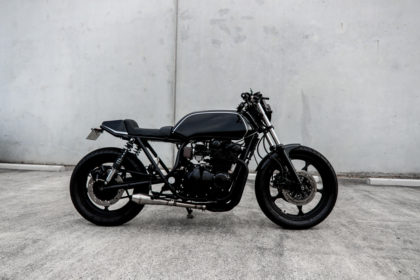 Purpose Built Moto has built a fair few first bikes for people. I guess something about the attainability of the customs we create speaks to new riders. They aren’t out of reach for anyone who wants a great looking bike. Something that the rider will remember and pull photos out in 40 years to show people, this was my first ever motorcycle. I really like that thought.

When a friend of the Shop reached out and told us he’d just purchased a bike to learn to ride on, we were stoked! And then we saw the bike….

Let’s run through some of the custom work displayed on the bike. 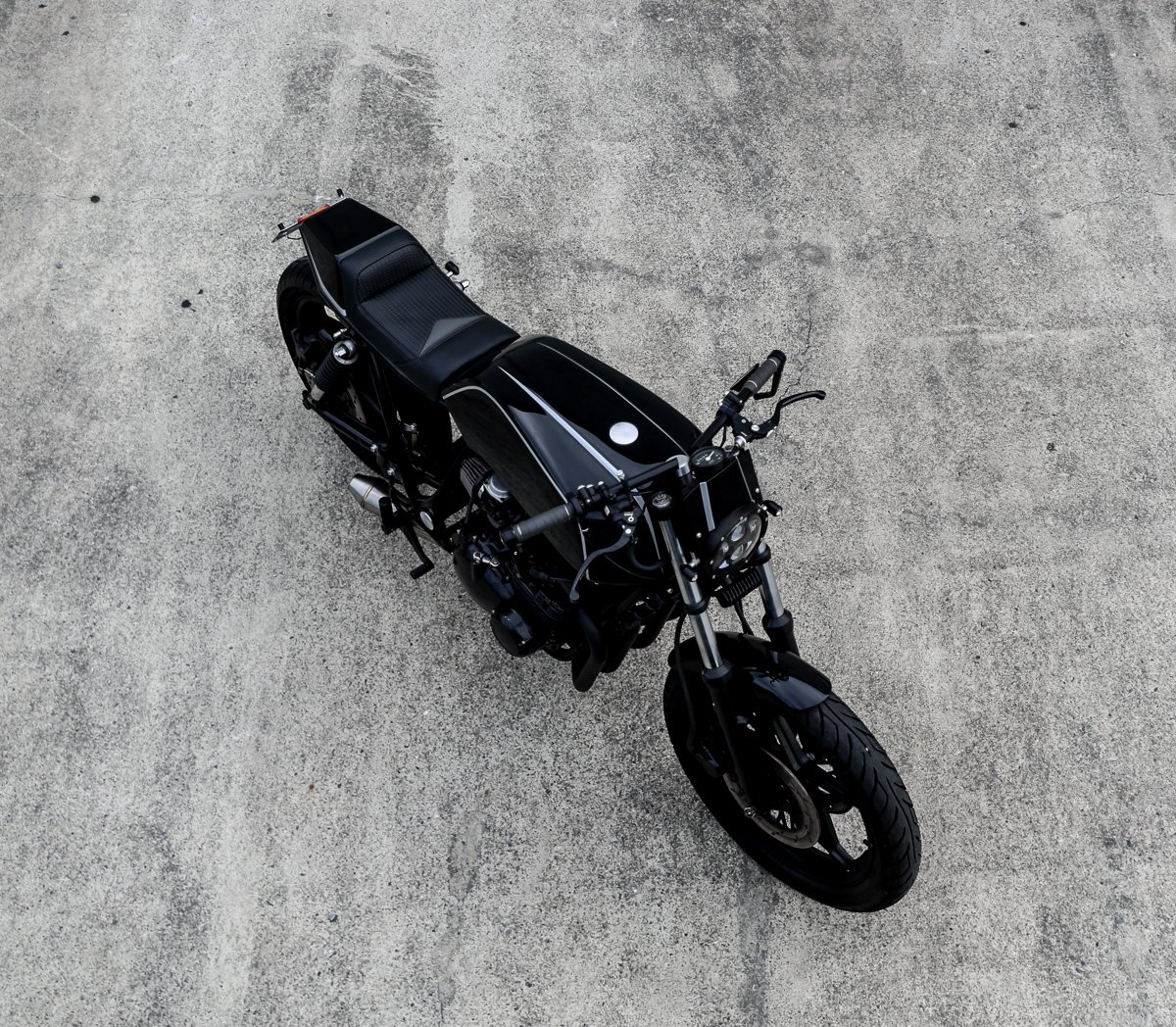 The rusty tank had worked some magic on the carbs and the bike shortly ran to a stop. Locky decided she needed some work so we stepped in and started the process with him. The Suzuki GS650 was sent to Dynomite Moto for a full look over. Receiving a set of new intake manifolds, carb rebuild, and a tune to suit the 4-1 exhaust and pod filters. 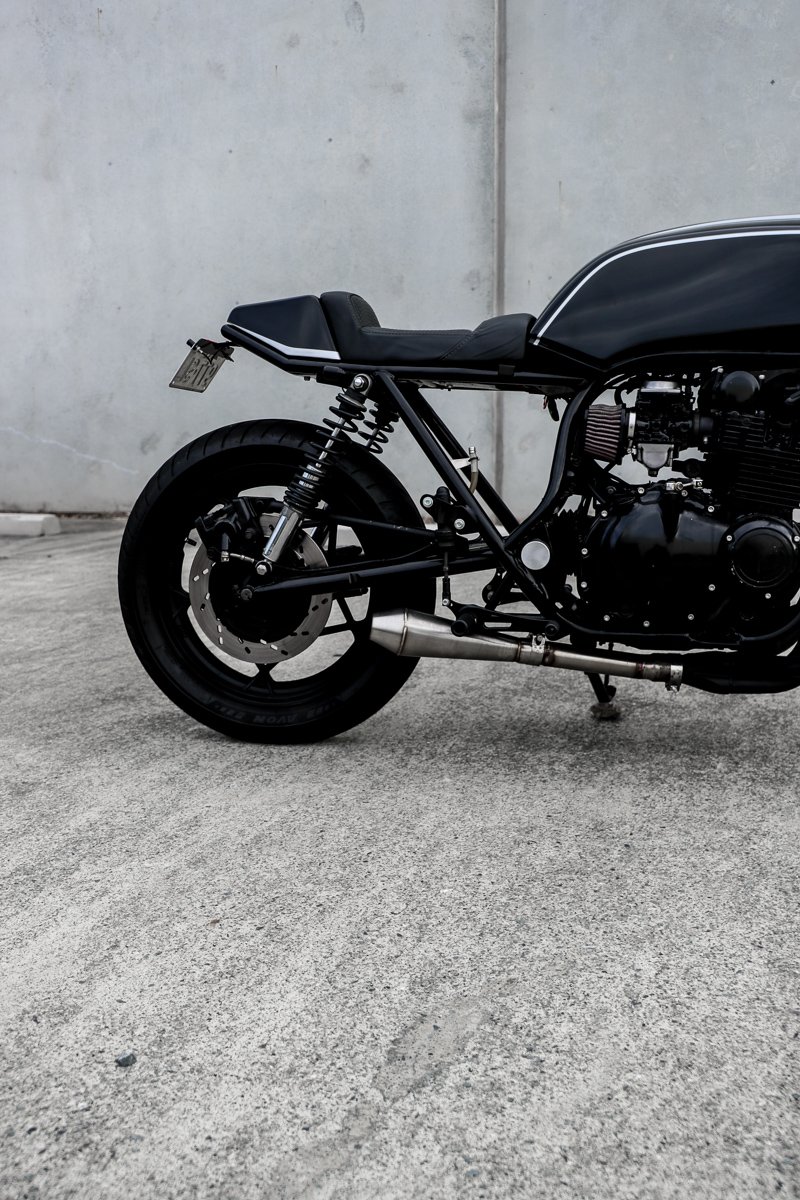 That bought me a little time to clear some other projects out of the way to make room. When we got the GS650 back, we started chopping, chopping the CX500 tank mounts, Chopping the tail, and chopping the dodged up battery and electrics mounts.

Starting fresh with a motor, frame, and wheels wrapped in some fresh Avon tyres. I had an early 80’s CB750 K2 tank at the shop and the rider loved the look of it. So in keeping with the “why the fuck not” theme of this bike, I built some mounts to sit the Honda tank nicely on the frame. The GS650 is a lot smaller than the CB750K2 so it gave a nice long line to the bike. Locky is a tall guy so it suited him well. The only modification to the tank was cutting out and repairing some dents, a new petcock threat and a welded-in pop-up filler cap. 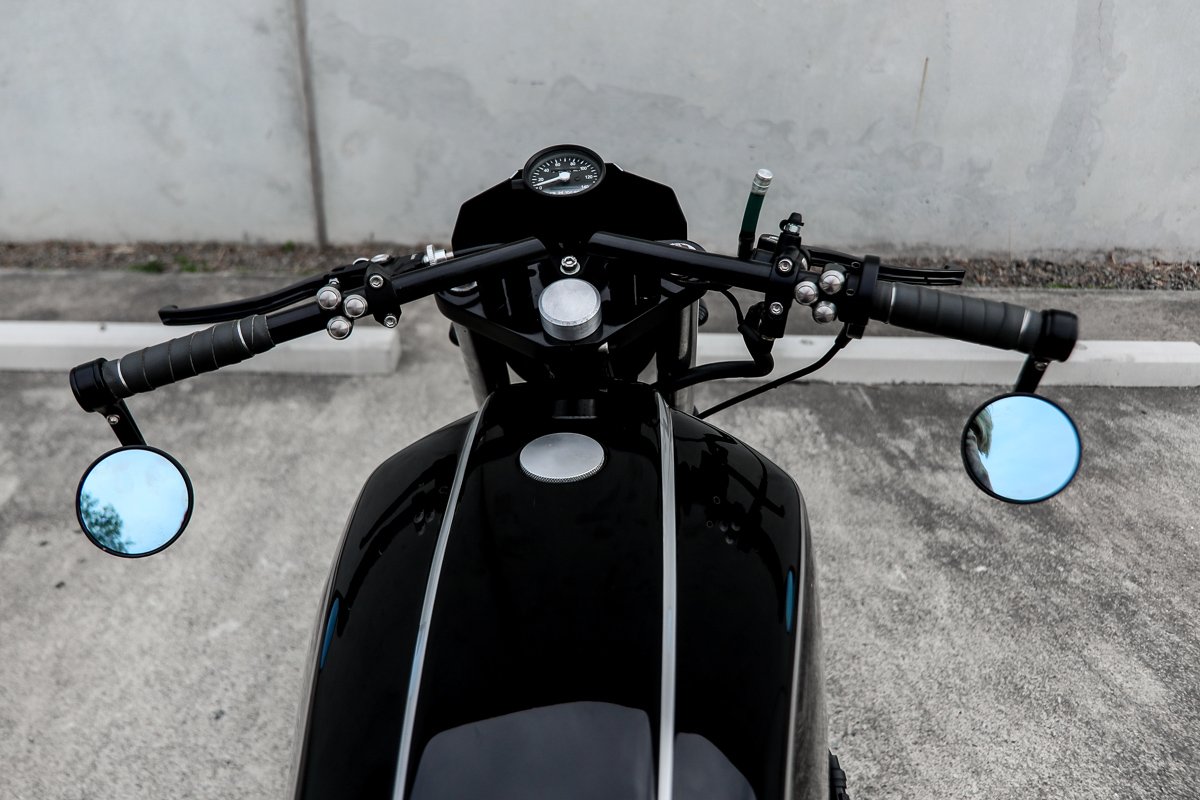 Next was finishing the tail of the subframe. The Honda tank is pretty square and angular so why would we put a nice rounded tail hoop on it? Well, we wouldn’t. a few nice tig welded miter joins on the tail section and it made the sharp tank look right at home on the GS650 café racer. 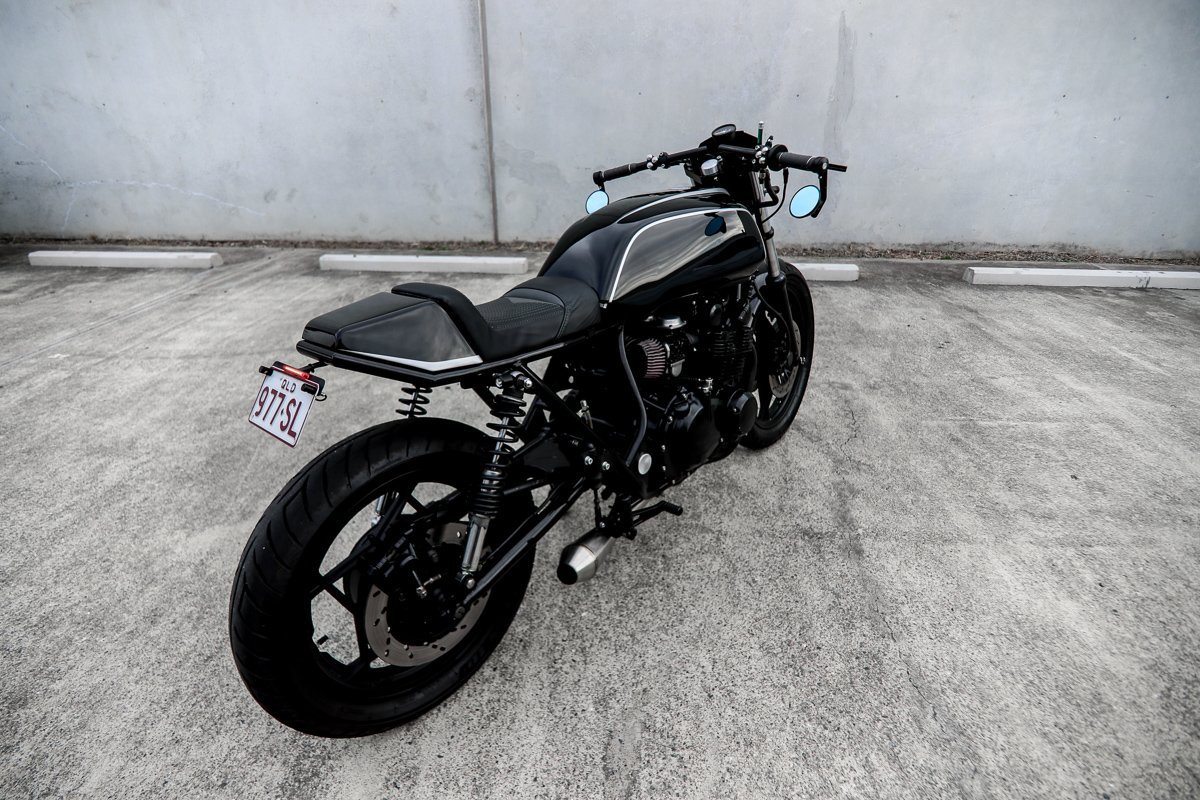 Running through the motions next was the electrics tray, fibreglassed to cradle the frame and creating space for the black box system, an antigravity battery, the CDI unit and fuse block.

Now we build a tail. Going full time at Purpose Built Moto hasn’t been easy, it’s a lot of work running a bike shop, but it has its upside. I get to play with bikes all the fucking time! That and I now have a lot more time to practice my craft and learn new things. So, here’s the first sheet metal tail I’ve ever built. Templated with a few bits of cardboard, cut in 0.9mm mild steel and hammered into shape, then welded up. There’s body fill in it for sure, and it took a while to get right but its square, strong and looks killer on the tail end. We then fashioned a simple tail tidy to hold the rear lights and turn signals. Tail fab done!

Next up the fiberglass seat pan, a bit of foam and Jamason from Timeless Autotrim got to work stitching it up. Grey pinstripes on black leather, simple and elegant leatherwork.

Moving to the front we trimmed the front fender, built some nice headlight mounts to hold the 5.75” flashpoint LED headlight, and a set of hollow tip LED turn signals used as headlight bolts to fix it in. 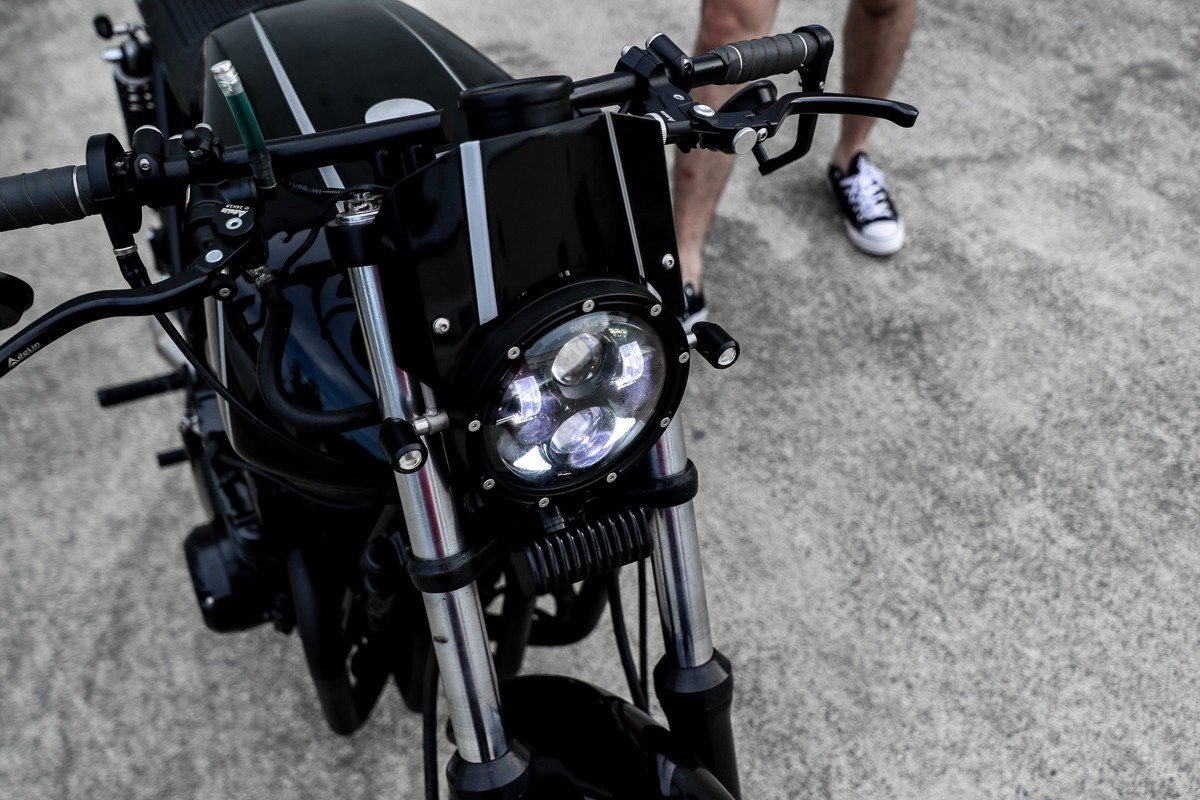 A challenge on this bike was the rider ergonomics. Locky is a tall guy, but the reach from seat to clip ons was way too far. Any way you looked at it something needed to be done. I mentioned a big ugly block of ally masquerading as a triple clamp before. The budget didn’t allow me to make a custom piece, so I had an idea to kill 2 birds with one stone. I would fabricate a set of low, clip-on style bars that mount to the top of the triple clamp. This would move the handlebars back about 70mm and mask the god awful top triple clamp at the same time. 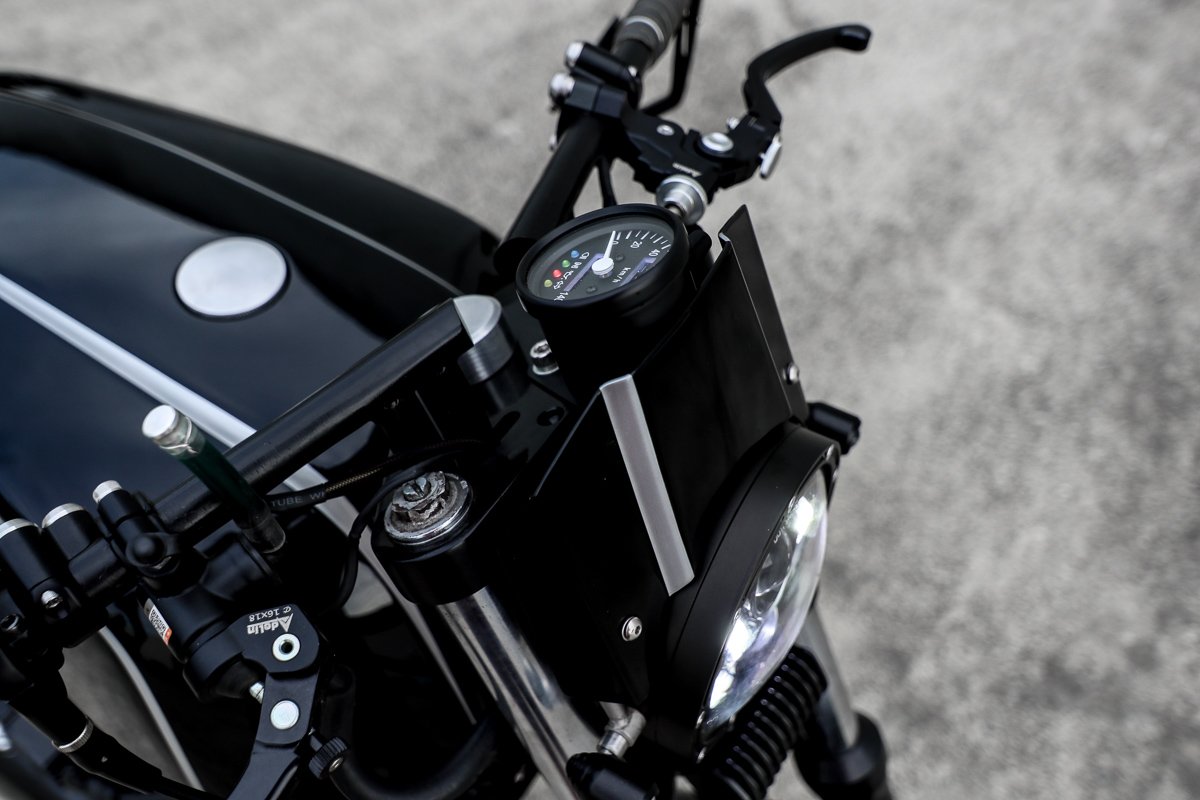 The one thing we needed to do was add a small bikini fairing over the headlight, with the added height of the bars, something looked a touch out of place, adding the hand bent aluminum fairing bought things back into spec and gave us a perfect spot to mount the mini analog speedo locky supplied us.

The result is a great riding position, low down enough to feel racer-esque, but definitely not uncomfortable on longer rides. The bar position is only complimented by the Cognito moto rear-sets fixed to a couple of custom mounting points. Again taking into consideration the rider’s size, we cut the factory peg brackets and pillion mounts off and build our own peg mounts, having a rearset feel, but a little lower than standard to give the rider a bit more room. 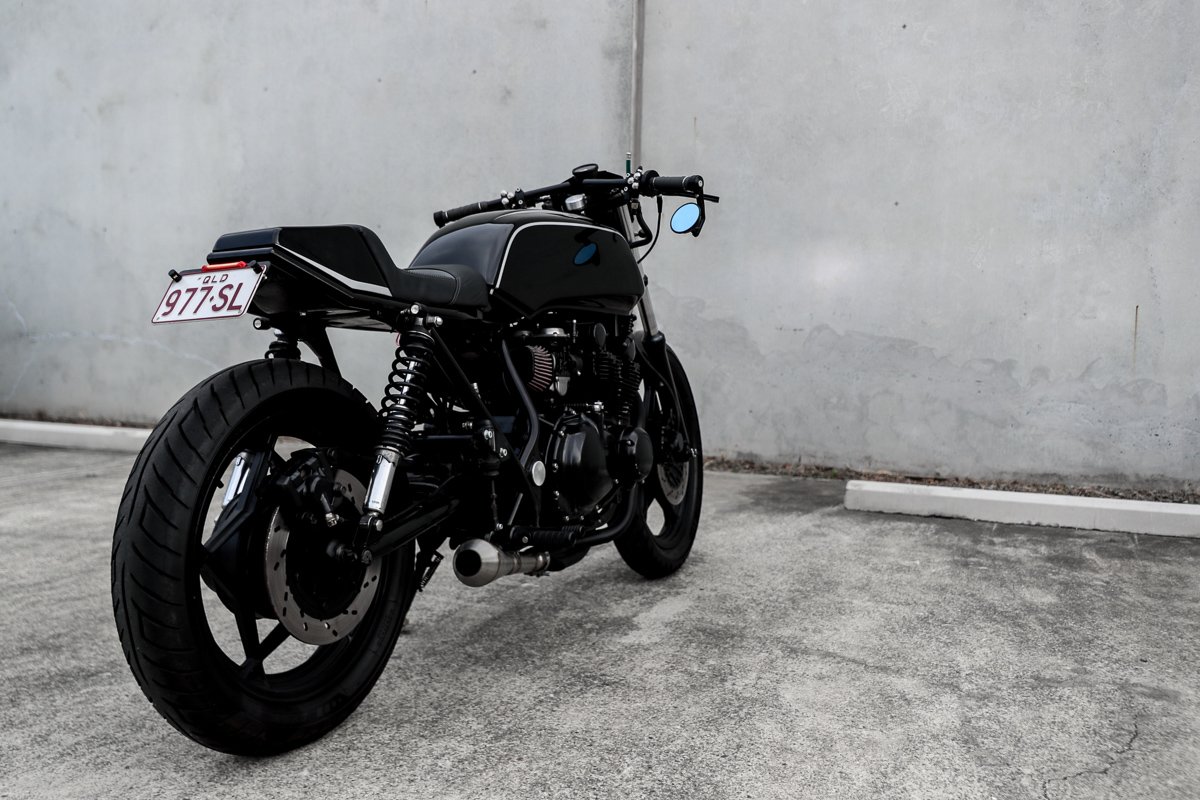 The electrical system is run by a set of 3 button switches, the PBM Black box module with an ignition key mounted under the tank. This allows for lighting control and kill switch to be handled simply and neatly with minimal fuss and wiring.  On startup everything flashed and beeped as it should until I hit the start key…. Something wasn’t letting the spark plugs fire. After a short fault-finding expedition, the CDI was found guilty and replaced. The GS650 firing up after a few turns on the starter. 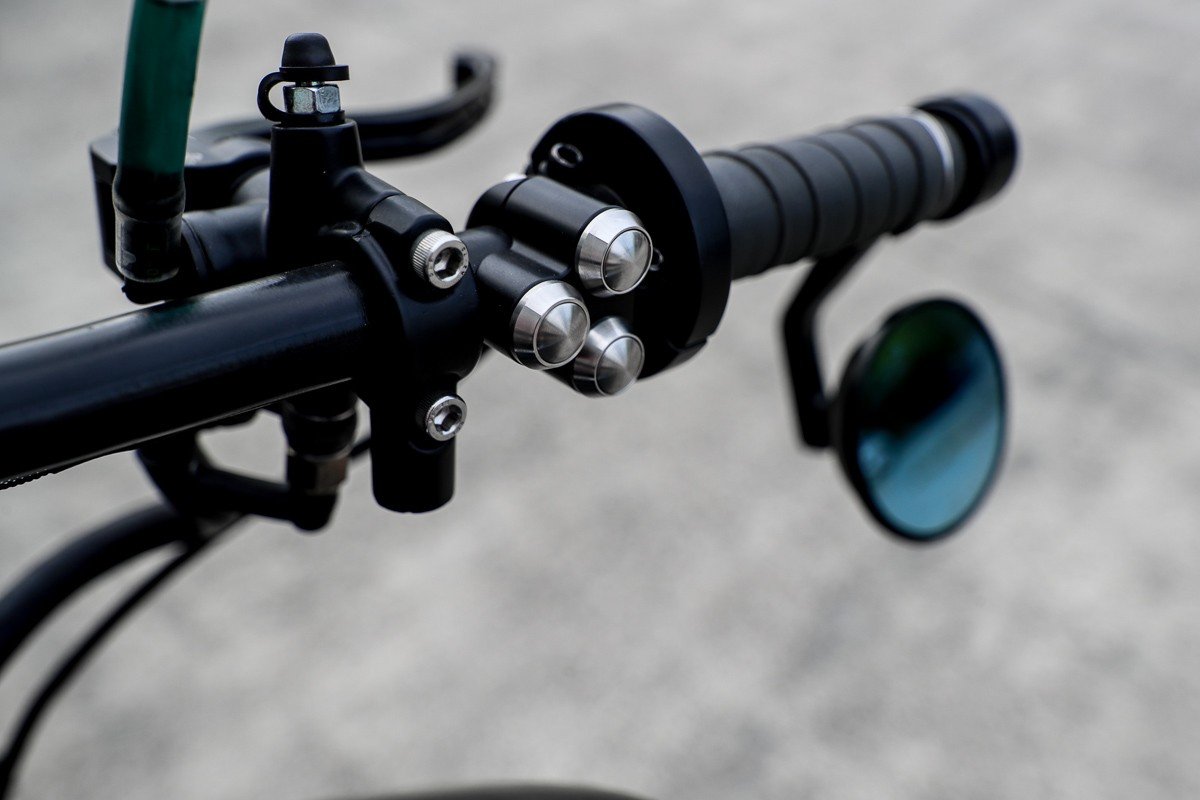 The GS650 café racer rumbles through a 4-1 collector fitted with a 1 5/8″ Purpose Built Moto torpedo muffler. Neatly mounted down the right side. Opening this bike up on a nice open straight is a treat to the senses. The sound of a 4 cylinder will always have my heart!

This Suzuki GS650 was always set to have a splash of colour, I often avoid building all black bikes because I feel like it can be a little lazy. However as we assembled the bike after the powder coat and engine paint it was undeniable this Suzuki needed to be murdered out, with a few select details of silver. The paintwork was done by Justin at Popbang Classics, I sketched out a simple design on the tank, black and silver and let home do what he does! 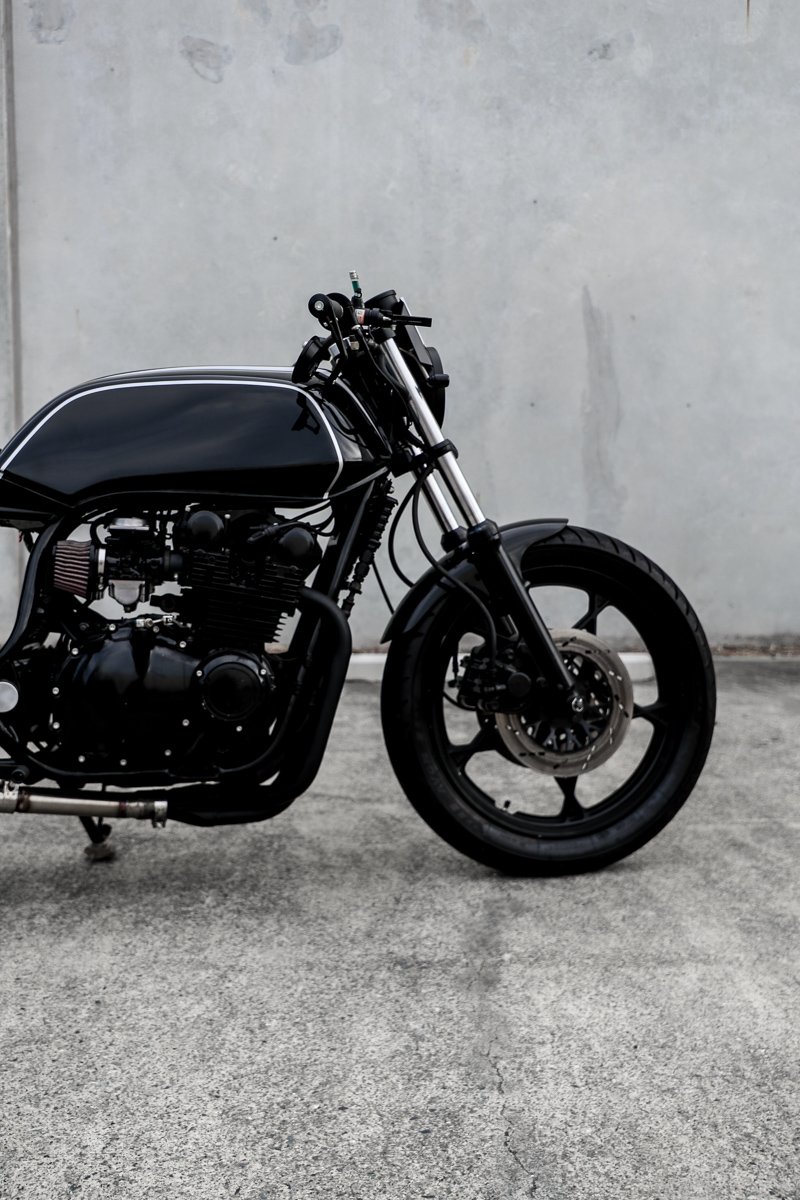 Riding this bike feels like home. With my personal bike being a GS550 it’s a welcome experience. The riding position feels spacious on my semi-miniature stature and the bike has yards of power for a weekend blast through the hills. The shaft drive giving smooth power delivery to the ground.

That wraps up all the custom work we put into this 1981 Suzuki GS650. Locky was stoked with the end result and I’m glad we made it out of that build in one piece, that thing took some serious TLC. For a more detailed look at the build hit the YouTube link below for the video and test ride.

Thanks for taking the time! 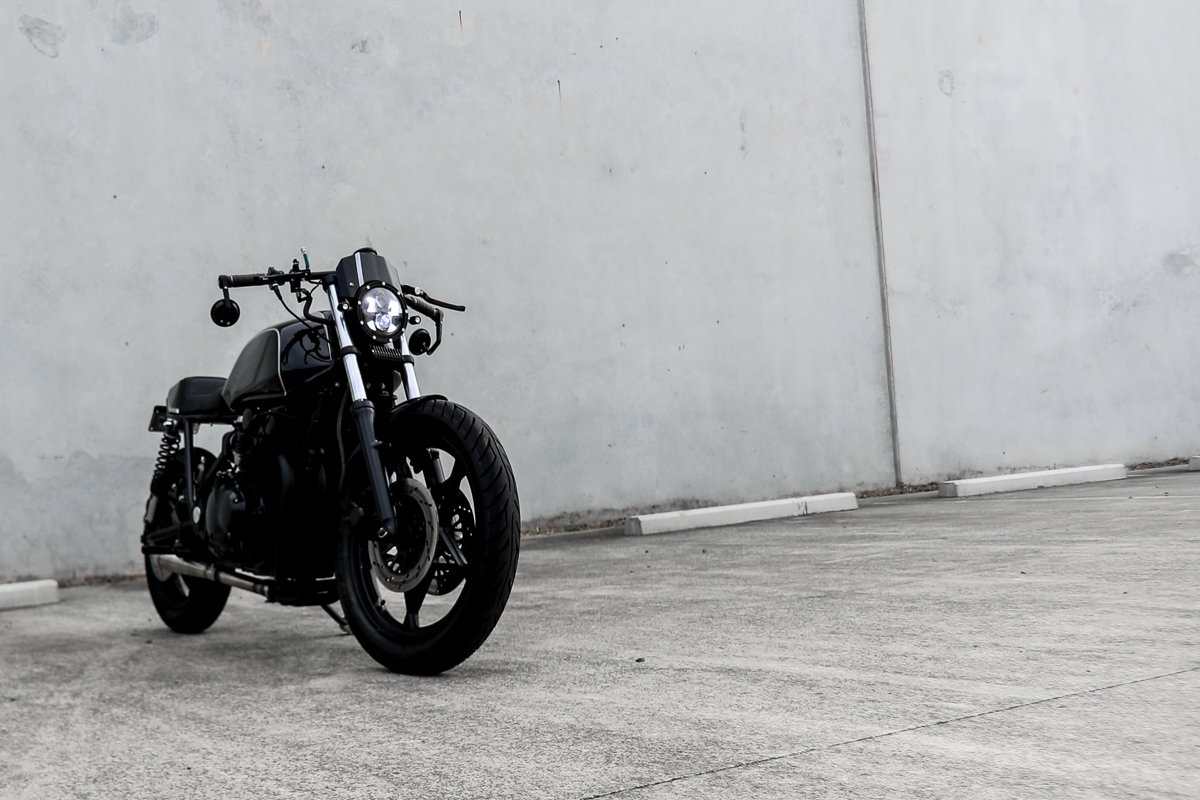