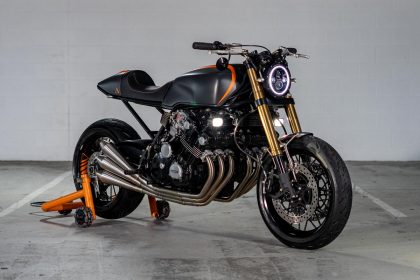 We get a few projects a year that really make me step back and take stock on what we’re doing. This Custom Honda CBX1000 is one of those builds. When Honda built a 6 Cylinder and released it in 1978 it got a lot of people talking, not only was it the fastest production bike ever made, it was a technical engineering feat. DOHC, 24 valve head and a ticketed 100HP at the crank.

It was a beast no doubt, and shared a bit of its styling DNA with the ’79 CB750 four minus the sharp ducktail on the rear of the CBX1000. Our rider Luke loved his 6 Cylinder Honda, but it was getting tired. The bike was due for a re-fresh, a re-build and a re-think. Purpose Built Moto was lucky enough to land the job. 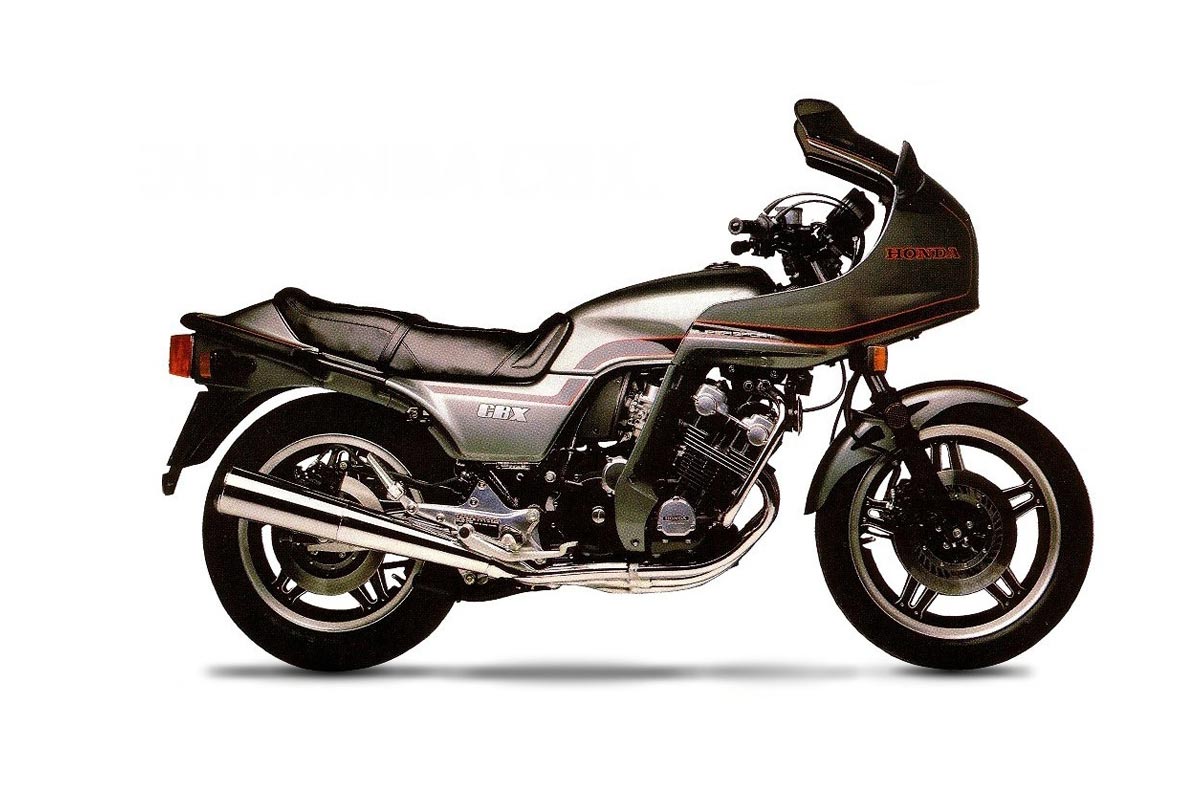 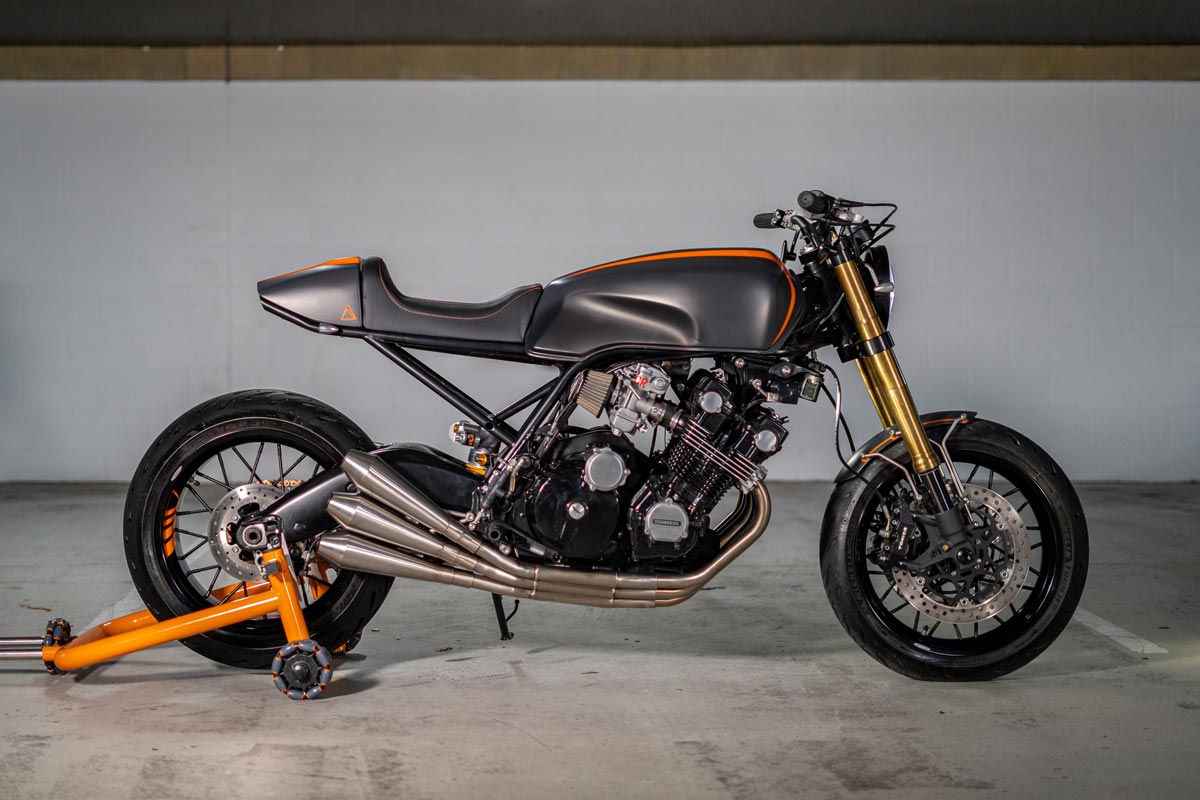 Luke is a big guy, and likes his big bikes. He also wanted to drag the CBX out of the 80’s and give it a healthy dose of modern styling. Through our previous custom bike builds like the Ducati GT1000 signature series,  The XV750 and our VFR750 retro racer we found a few areas of common ground Luke loved, and started to develop a style for his CBX.

The Honda would take shape as a sharpened up Café Racer, hinging off the CBX’s bold tank and the factory tail styling. With the addition of modern suspension, wheels and lighting the CBX1000 Café racer would also get a few select performance upgrades. We wanted to focus on bringing out the power the engine already had, but make it more in your face, by stripping off weight, and boosting the handling. 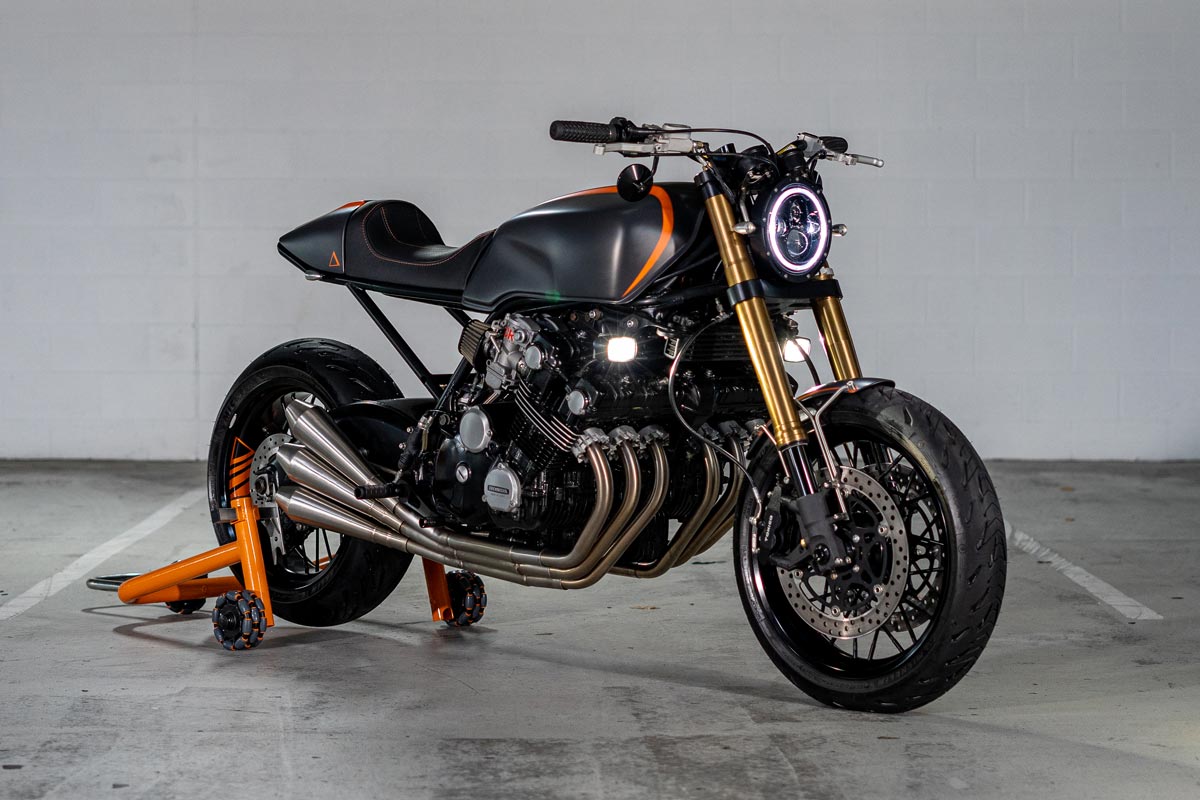 After tear down, the CBX1000 was already looking better. This bike was a pro-link model. Aluminium swing arm and a huge front fairing that weighs as much as a bar fridge. The bike dropped 20kg with the removal of 6 bolts!

As I started to measure up the bike I could draw a clearer picture of this concept in my mind.  We weren’t going to be able to achieve the Owners request for modern sport bike tyres while using the stock swing arm. Before we started cutting, I had to go shopping.

With a sketch in hand of what I was working with I went down to MotoGenn, a local parts dealer, and got busy measuring. I landed on a set of Gen 2 Suzuki Hayabusa forks, and a 2010 Aprillia RSV4 swing arm and suspension linkage. Luckily all of this was on the shelf, so we could get to work right away. 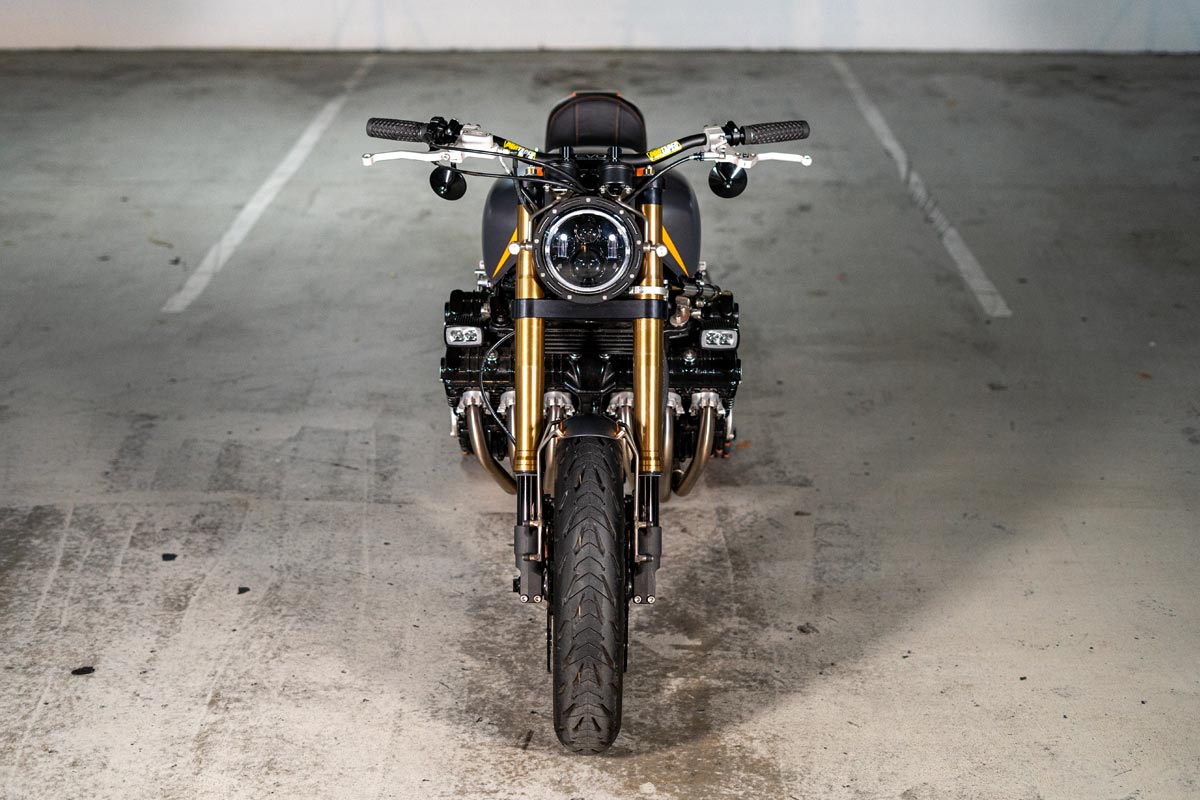 Alloy wheels wouldn’t cut it either. I got a set of specialty Jonich M9 24 spoked wheels on the way ASAP. The All black wheel set, with a space arrangement of 24  – 9mm spokes gives this classic Honda a healthy dose of ultra modern edge. Finished off with new Moto-master rotors all round and a custom machined aluminium sprocket.

The front end was an easy fit up, housed in a custom triple clamp, with mid rise pro taper street bars. The gauges and LED lighting set up are mounted on custom fabricated brackets with everything held in tight, right where it needs to be. The CBX1000 motor beautifully protrudes from out under the tank, the space between gave us an opportunity to mount some auxiliary lighting to be used in conjunction with the 7” Flashpoint LED headlight.  These operate as running lights mounted on either side of the bike. Adding a little street fighter flair to the retro Honda as it took shape. 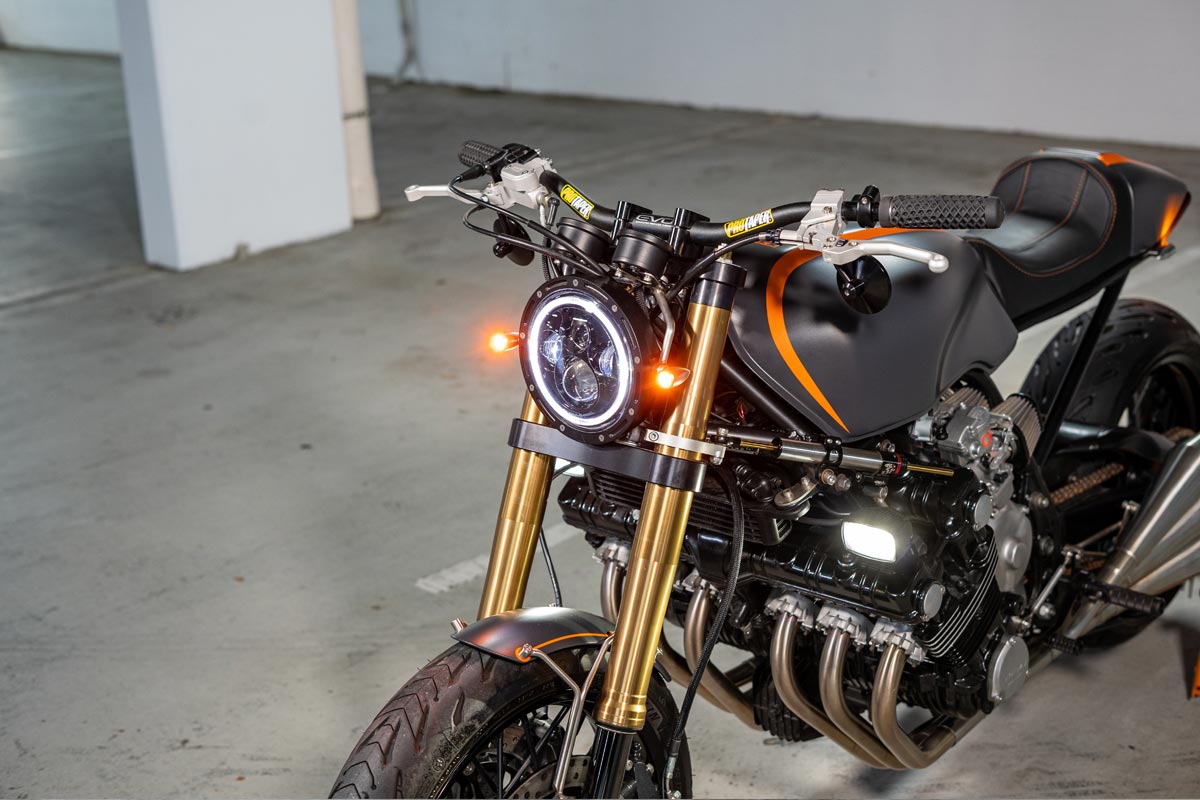 Swing arm swaps are always a bit of fun when building a bike, but they often require a little heavy lifting in terms of fabrication. The decision was made to completely rebuild the subframe and seat section in order to make sure the new swing arm and suspension looked as if it was meant to be there.

From the engine cradle back was removed, the swing arm pinned in place and I started to mount the lower suspension linkage. Fabricating the mounts to the frame, then working out where the top of the rear shock would land.

The idea was to make the top suspension mount as seamless as possible. By using the brace on the tail frame, from one side the shock mount isn’t visible at all. Achieved by turning up a threaded mount for one side, and a counterbored tube on the other for the mounting bolt. Add in some cross bracing, and you got yourself a swing arm conversion. Allowing a 180 x 17” rear tyre, and a nice little brake upgrade too. 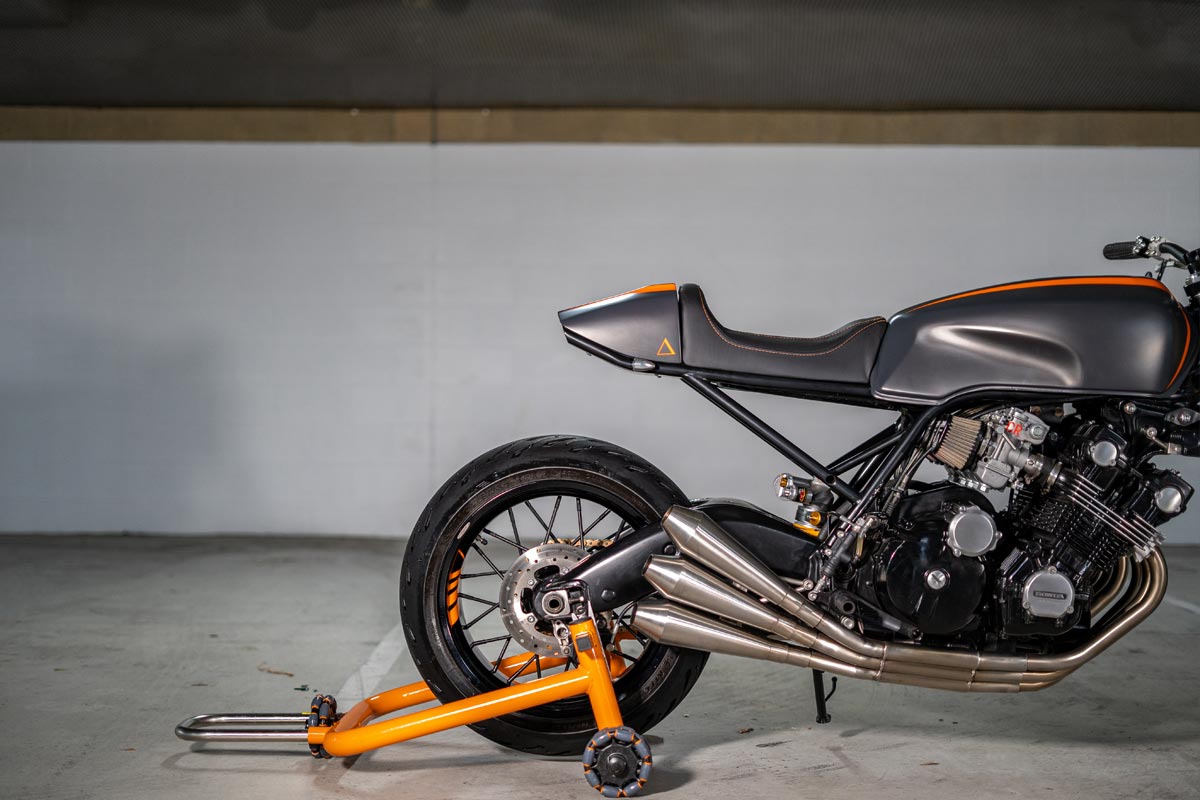 The real upgrade comes in the form of the custom built Ohlins TTX rear shock, dialled in at Ride Dynamics for an unbelievable ride feel on the bike.

For the tail I wanted to play around with something different, steering away from the tail hoop design seen on most customs I built in the bracing under the seat and finished the frame rails with a capped end. Shaping a sheet metal bottom plate that fit up under the custom tail cowl. The tail houses the battery, starter solenoid and a set of 3 LED button lights complimented by the Hollowtip 3 in 1 tail lights that are frenched into the frame. 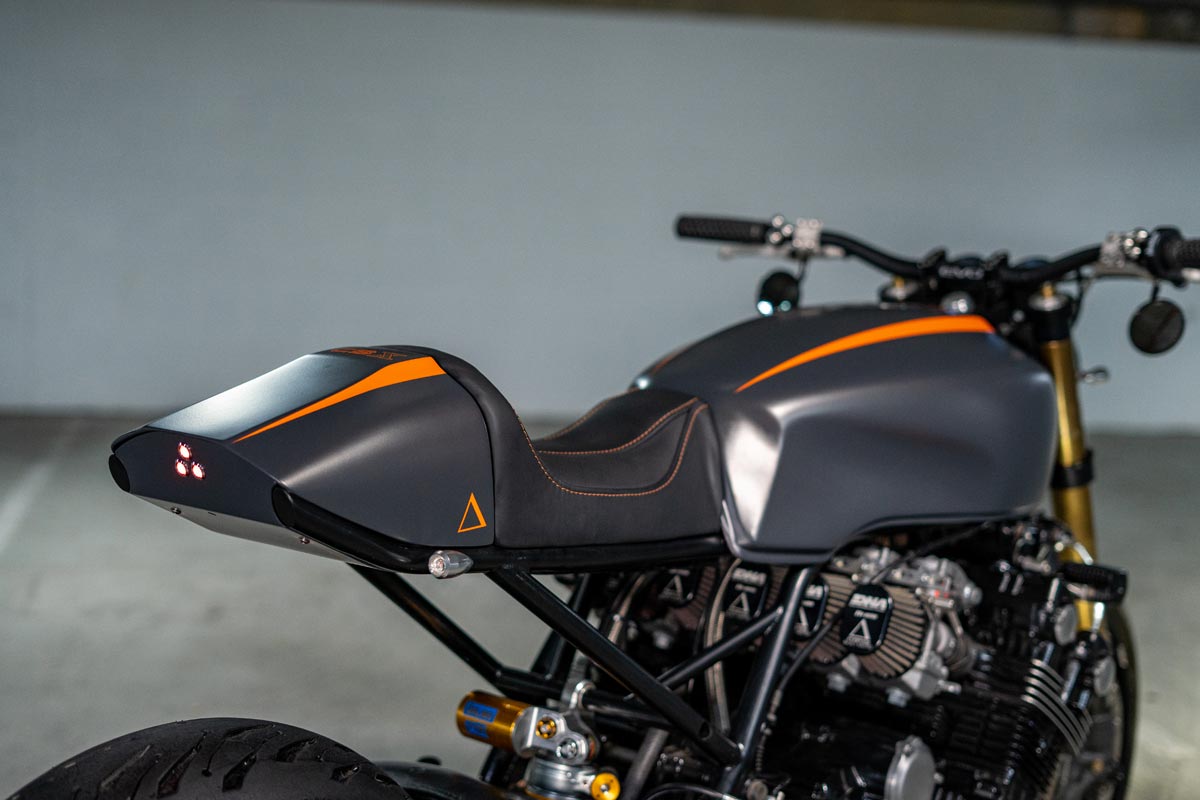 The Honda CBX1000 has a great tank, but the design has a pretty bad flaw. On the rear theres a pretty thin cavity of about 15mm. Over time debris settles in these 2 places and rusts the tank out. This one was no different. The tank was stripped, repaired and had a few of the old seat mount sections smoothed out at the rear. Along with that a smooth pop up filler cap was welded in. A few subtle mods here made a world of difference in achieving that clean finish on the bike.

Last pieces of fabrication were on the front fender. Using our DIY aluminium Fender kit with a few extra bits, I built up a 6 armed fender mount. Its aggressive and a bit in your face, but exactly what the front end needed. 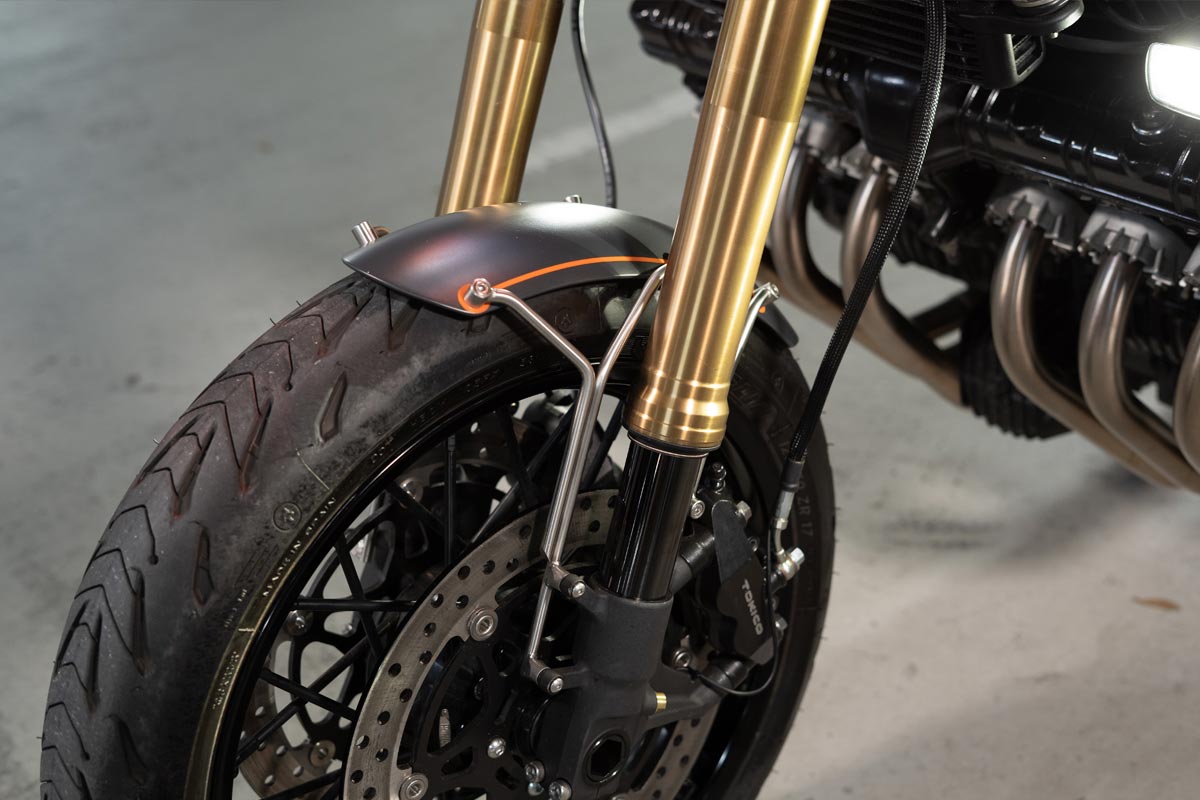 The engine was given a freshen up on the top end and a new set of Keihin FCR carbs that breathe through some custom DNA filters. Everything else was checked over and made sure this 6 cylinder Honda would be ready to ride for a long time to come. 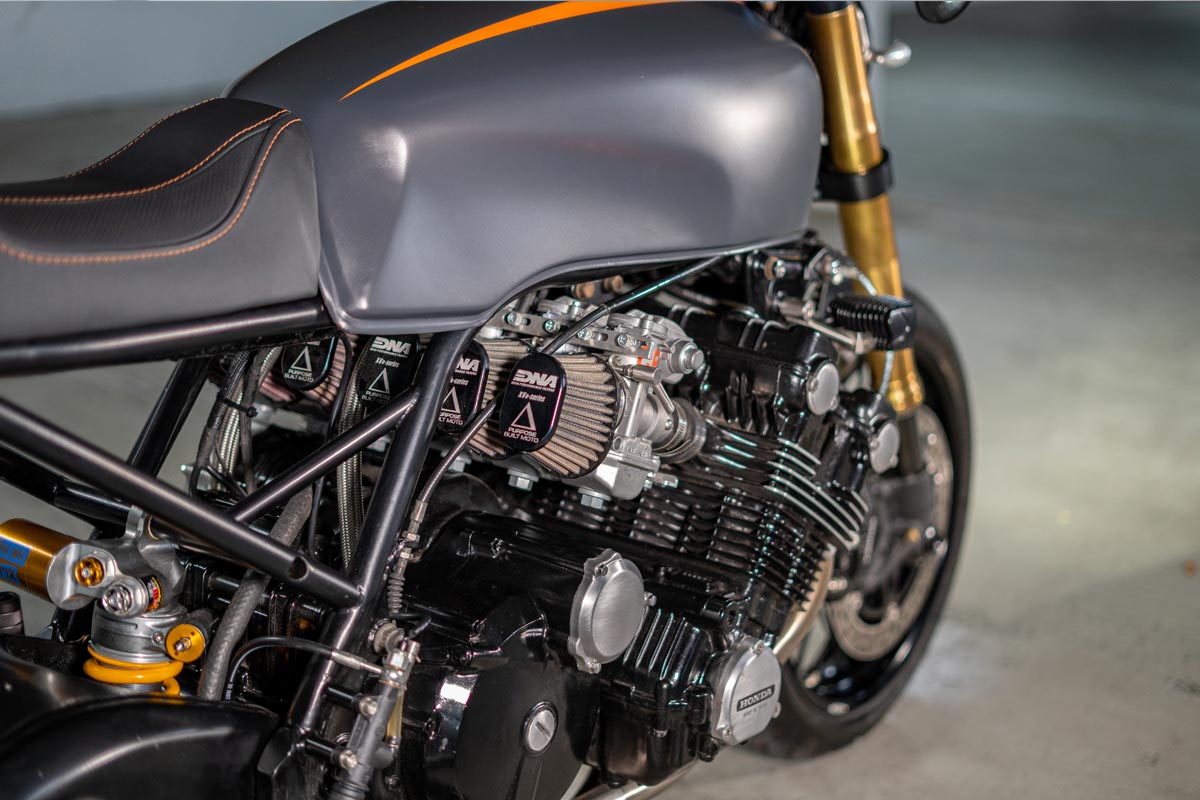 Ask anyone who’s been around a CBX1000, the most memorable part about it is the sound. Its incredible! Like an old formula 1 engine as it climbs the rev range to a full blown scream. Check out our build and test ride video below to see what I mean. The donor bike came with a set of really nice performance headers and a 3-1 collector on each side that fan out into 6 mufflers on the rear. The only problem was the mufflers were super long. We retained the headers and collector while fitting a set of 6 PBM torpedo mufflers, with custom mounting brackets. 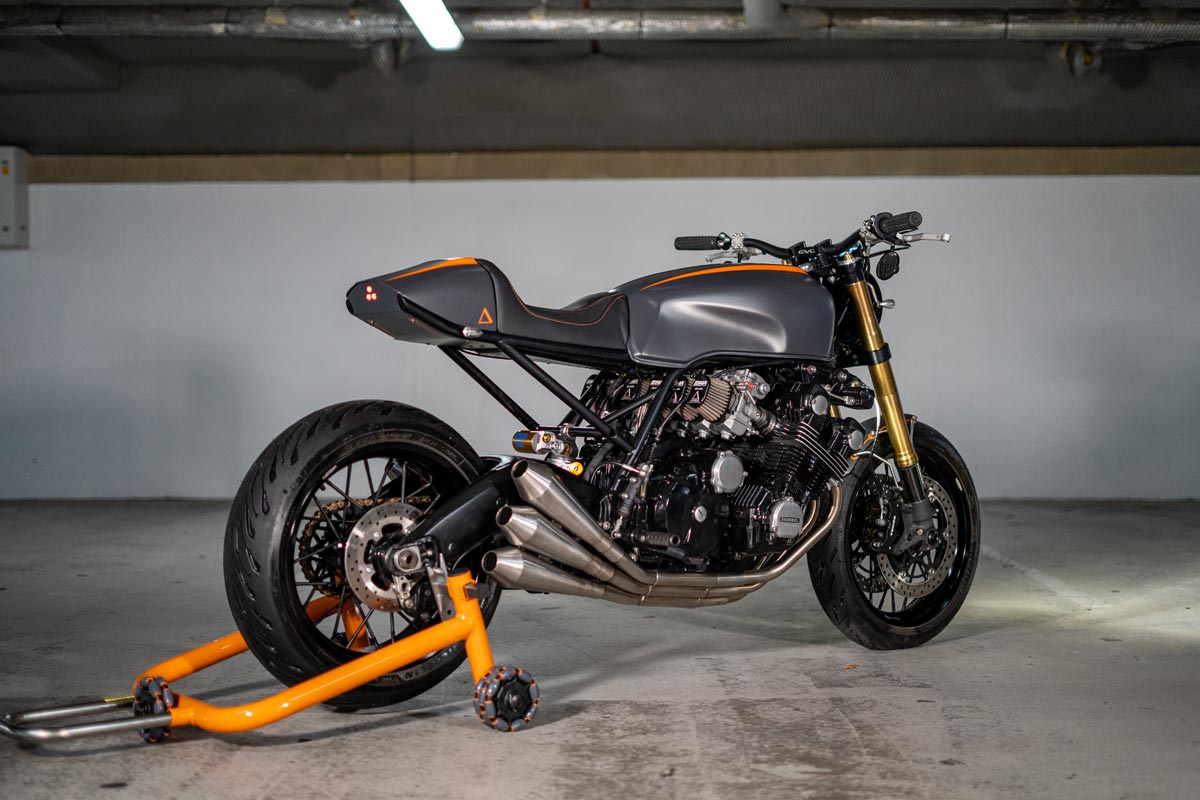 While still well muffled, the new set up delivers a healthy growl, without being over bearing while you’re racing down the road.

All of these mods were tuned to perfection at Dynomite moto, with the CBX now putting out 100HP at the rear wheel, and with a weight loss of almost 50kg off stock the CBX has a revised dry weight of only 228kg down from 277kg. 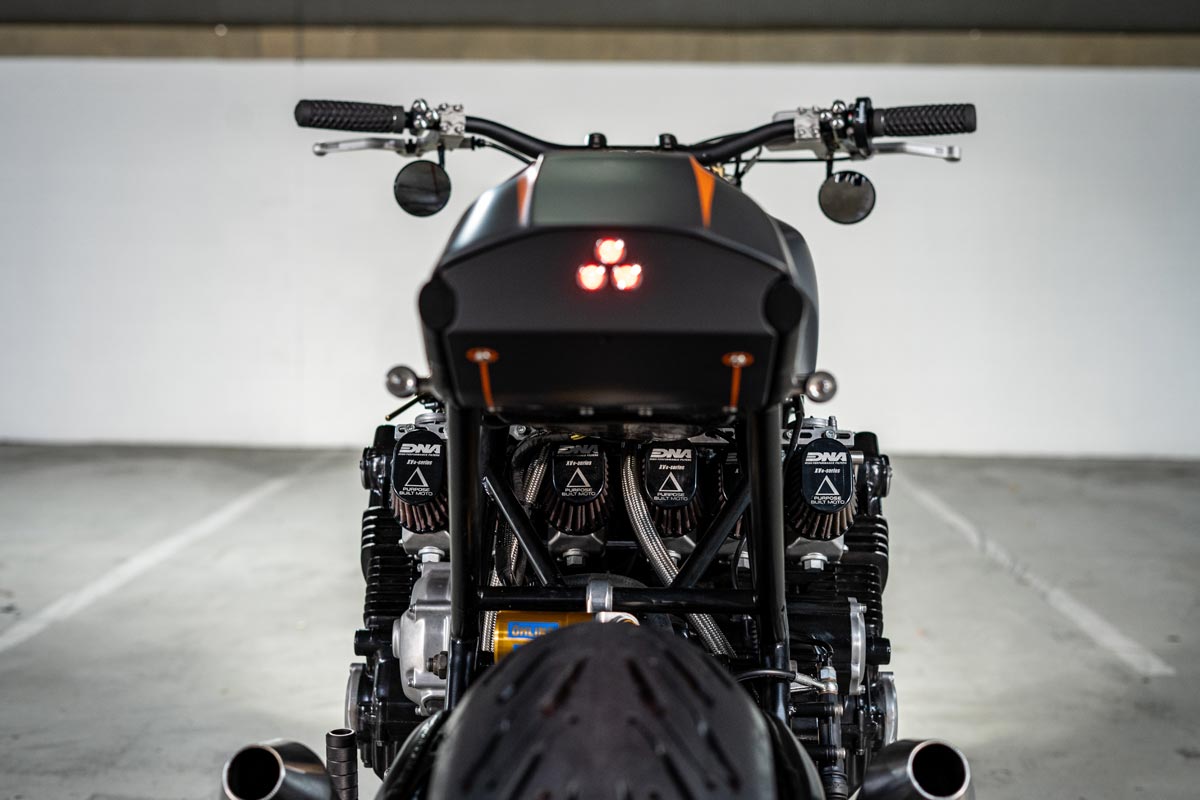 The CBX1000 Café Racer was finished in a matte grey, with a burst of orange detail. Simple lines and emblazoned with the PBM Delta on the tail. A few other details we snuck onto the build are the ultra clean switch buttons and new mirror set up, and my personal favourite the sports bike hero orange rim stickers. I wanted to add a bit of new age styling to the rear of the bike and these custom decals from Rival Ink did that perfectly. 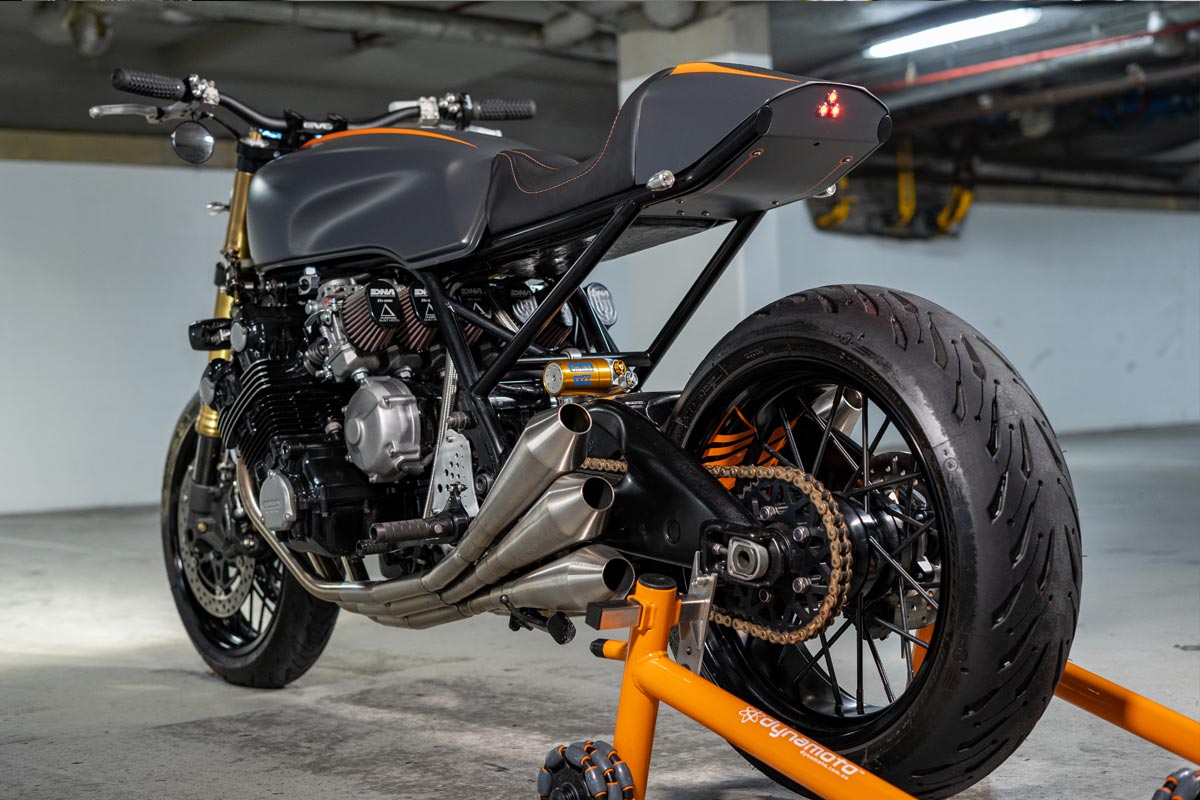 The first ride on this behemoth bike was intimidating, its such a wide motorcycle, but once you get moving that bul fades away and this bike is surprisingly nimble through corners and holds the road incredibly well. Credit to the suspension work completed on the bike. With the exhaust humming behind you the bike has bucket loads of torque, that only gets better as the engine starts to liven up above 4000RPM, then it kicks like a mule and you won’t know what hit you. 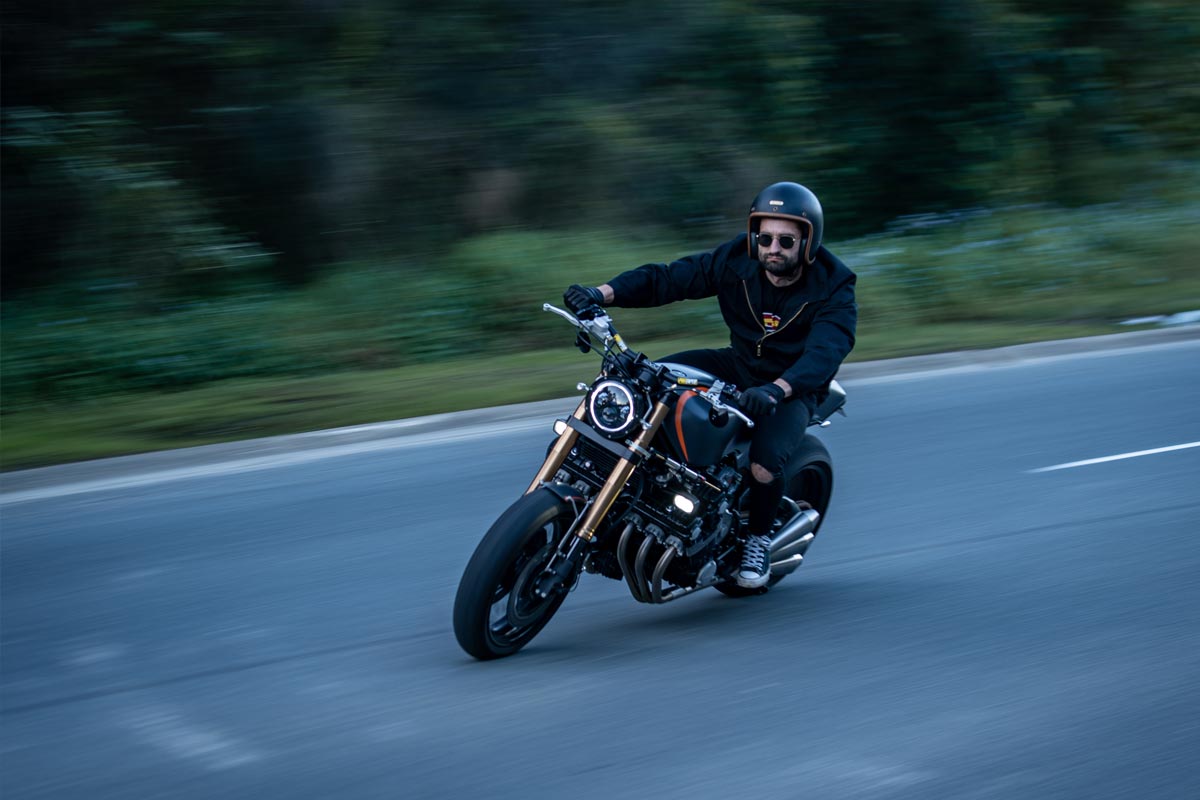 The weight loss allows wild acceleration that really caught me off guard from a huge air cooled lump. A welcome surprise as you rip on the throttle and tell the big girl to get going! We had a lot of fun crafting this unique motorcycle for an extremely good client. Luke was our I deal customer, he came to us with an outline of his idea but trusted the team to do what we do best – Build one of a kind motorcycles to be ridden, enjoyed, and stared at.  We’re looking forward to getting to work on Lukes next project the mighty Suzuki GSX1400, stay tuned for that one. But until then enjoy our build run down and test ride video.