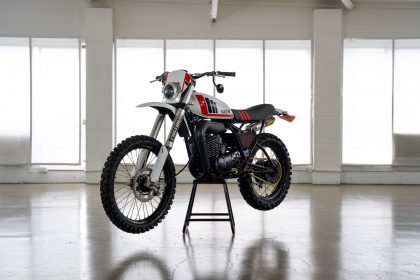 A 1978 Yamaha DT400 Vintage Motocross bike, built for any and all roads!

The DT400 Scrambler has a lot going for it, they had some of the nicest tanks made in the 70’s, the frames were light for the era, and at the heart of it all is a 400cc 2-stroke engine. Now I won’t lie to you and say it’s a darling to ride, its an animal, a snarling twitchy fucking animal. 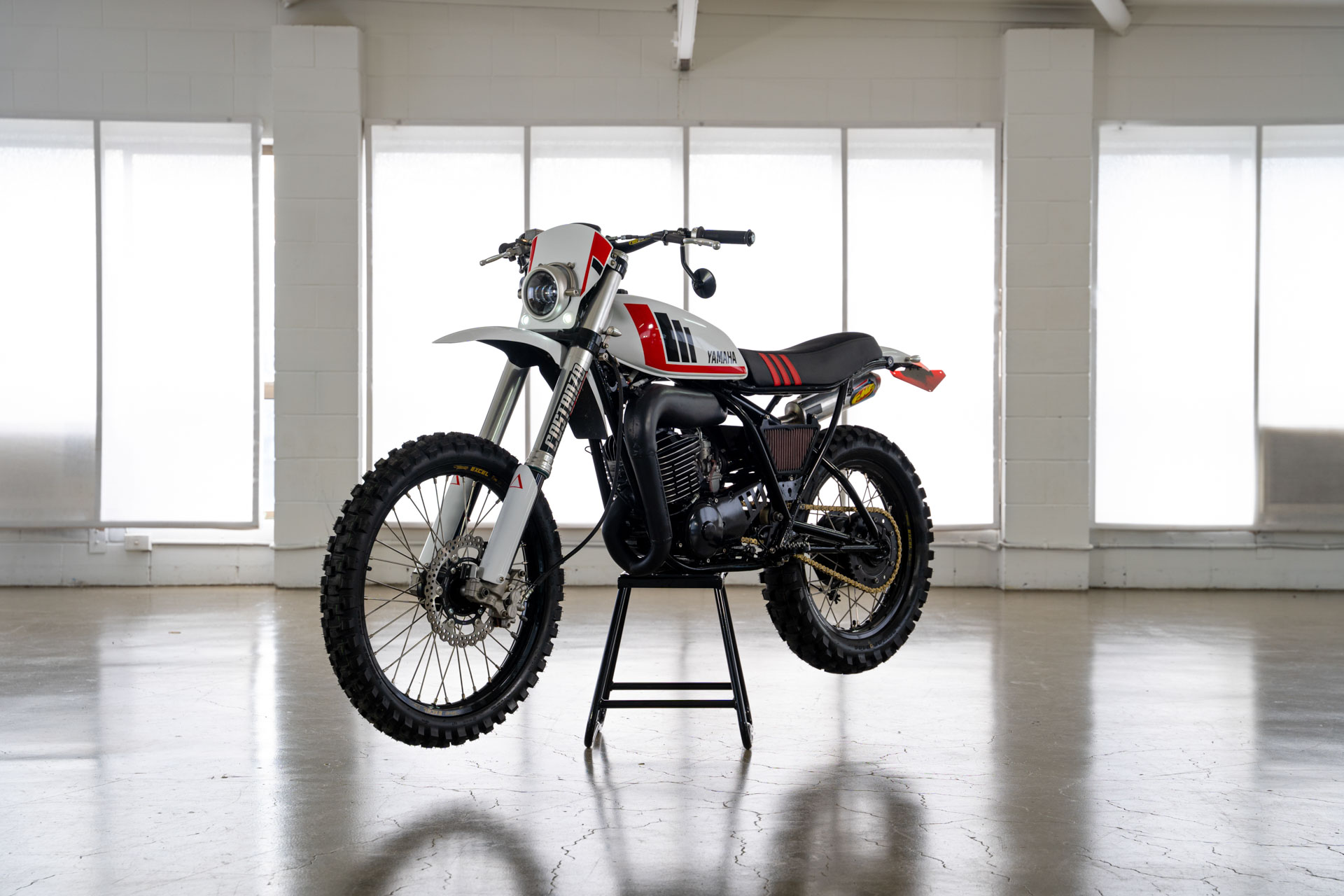 If you’re looking for a bike to take a leisurely cruise around town, this isn’t what you want. However, if you want a bike that doesn’t feel happy unless you’re wringing its neck, it can get around on the street but will be at home down a fire trail, and no matter where you point it will deliver a heap of fun. Then our re-imagining of the 1978 DT400 Scrambler may just be the medicine you need.

I own a 1975 DT400 Scrambler myself, it’s a great bike. In stock form they’re an over powered farm bike, a vintage enduro racer you can register, and that bike your drunk uncle told you to have a go on at a family BBQ when you were 10 and it scared the life out of you. But when you take them down to the bones and rid the chassis of its tired and slouching suspension. The DT400’s look more like a bike you could point at an MX track. This is what our rider, Clint was after. 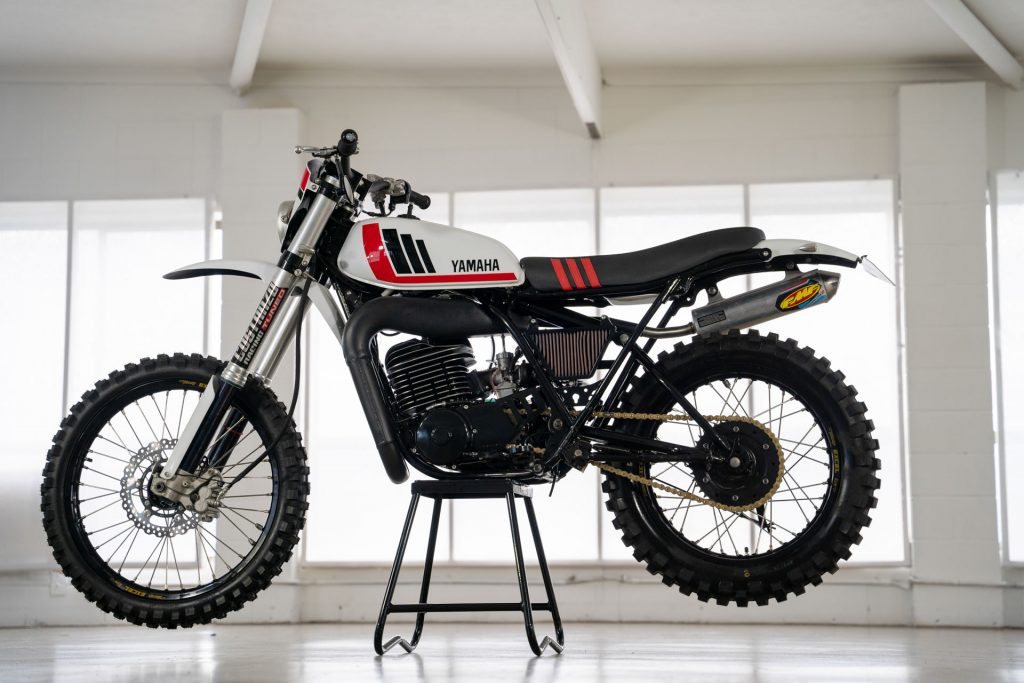 The start of the build saw the busted plastic fenders sent to the bin, front and rear suspension removed and the wheels stripped. With a bare frame on the bench we went hunting for some parts.

A 2014 KX250F front end was sourced, including the front wheel and brakes. Grafting this onto the front end and lowering it a touch set the height for our rear suspension that was sent out to be lifted to suit. Costanzo Racing tuned, setting the chassis straight once again. Wheels are a 21” front and 18” rear, using Black excel rims, the front laced onto the KX250F hub, and rear retaining the stock hub. Tyres are a Dunlop D606 dual sport tyre. 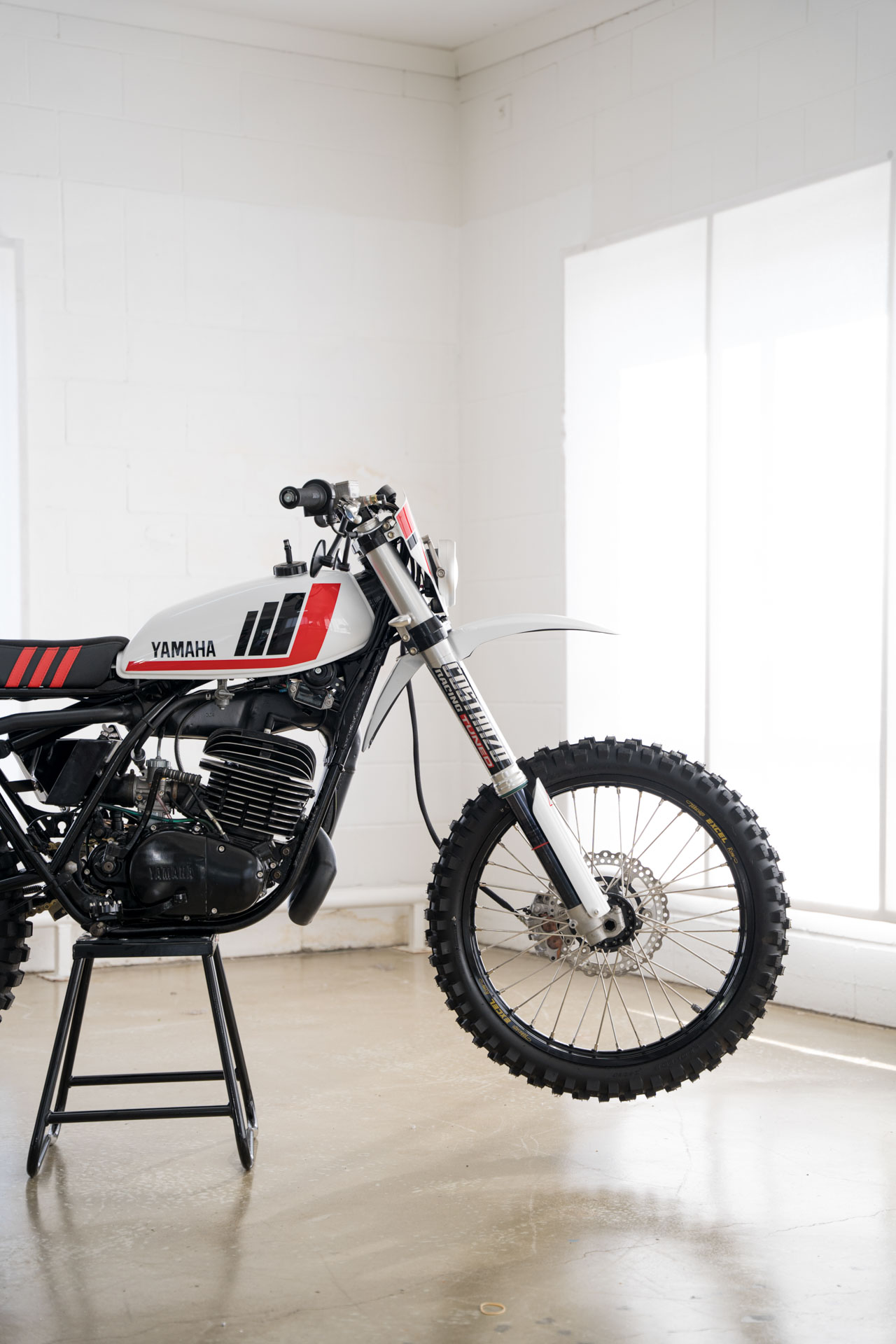 You’ll notice the smoky silver finish on the forks, the standard KX250 straw gold wasn’t going to work here so before the forks were sent for tuning, we stripped the tubes in the lathe and semi polished with a very fine sandpaper before having them clear anodised. A small touch, but it’s the details that count right? 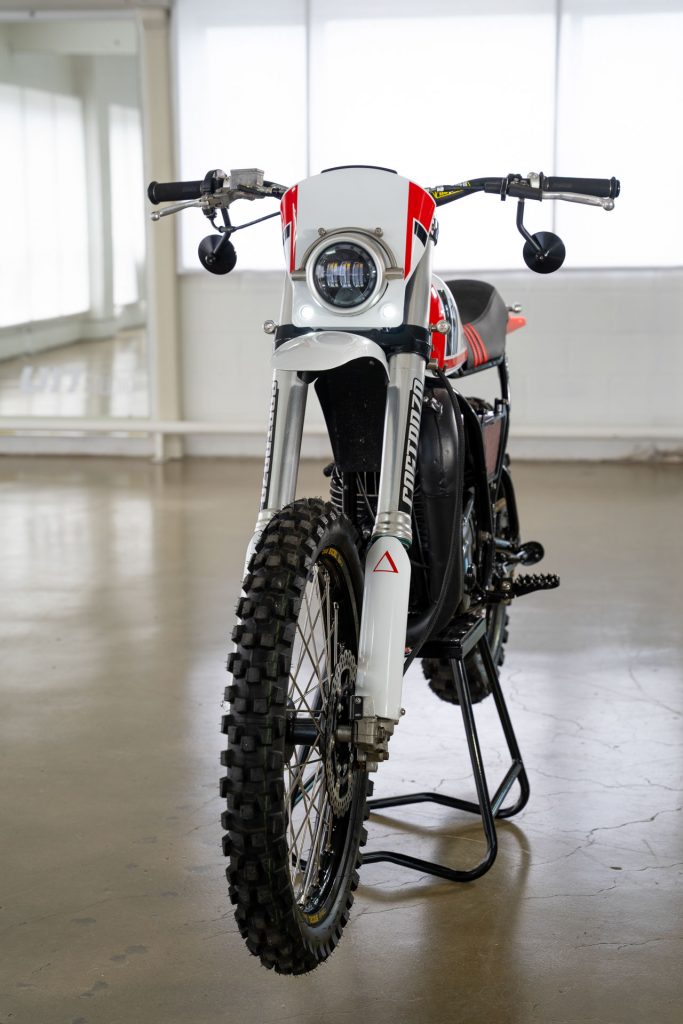 The DT400 Scrambler engine was torn down in house, checked over, rebuilt with a few select upgrades, including a 12V Vape ignition system and a new Mikuni Carb. Time for fabrication to start. We wanted to retain an airbox and 2 stroke oil tank so with the swing arm lifted and the engine back in we knew what room we had to play with. I had a hunt through the DNA filters catalogue and found a performance air filter usually for a BMW R18, but we could make it fit. So I set Dylan to work fabricating an airbox that would have the panel filter fastened to the outside, stopping any debris off the open wheel from entering our intake. On the opposite side is a hand made oil tank that’s plumbed into the onboard oil pump. 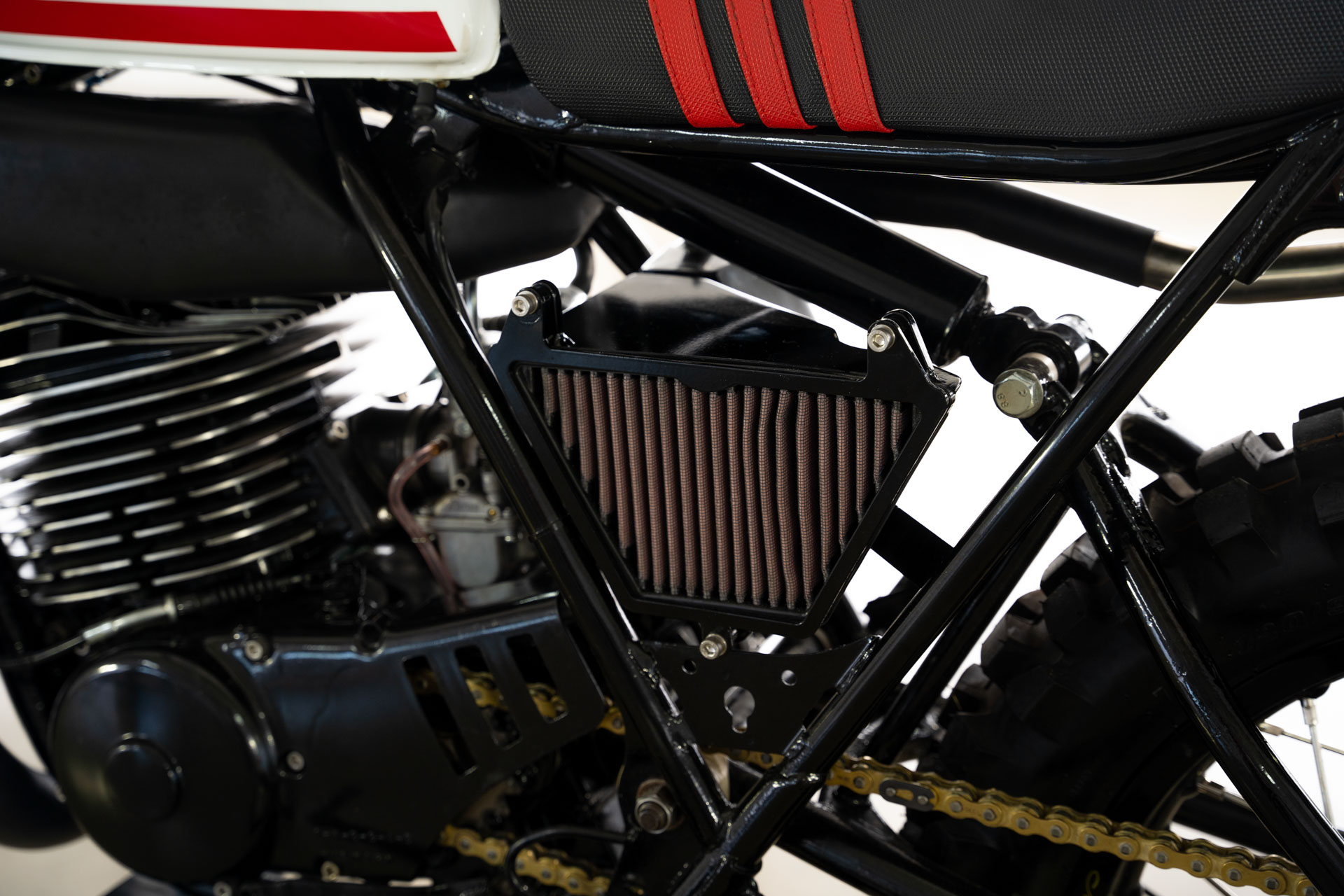 The DT400 has a pretty nice pressed metal section on the rear of the frame. Usually I don’t like these, but this one spoke to me. I reset the tank on the frame, worked out my seat line and modified the pressed metal section to include a mount for the rear fender. I’ve recently tooled up for sheet metal shaping and started fabricating our own custom aluminium fenders. This one was one of the first I had a go at that turned out well enough to put on a bike. The lighting on the rear are the 3-in-1 Hollow Tip LED signals. Brake, tail light and turn signal in one. 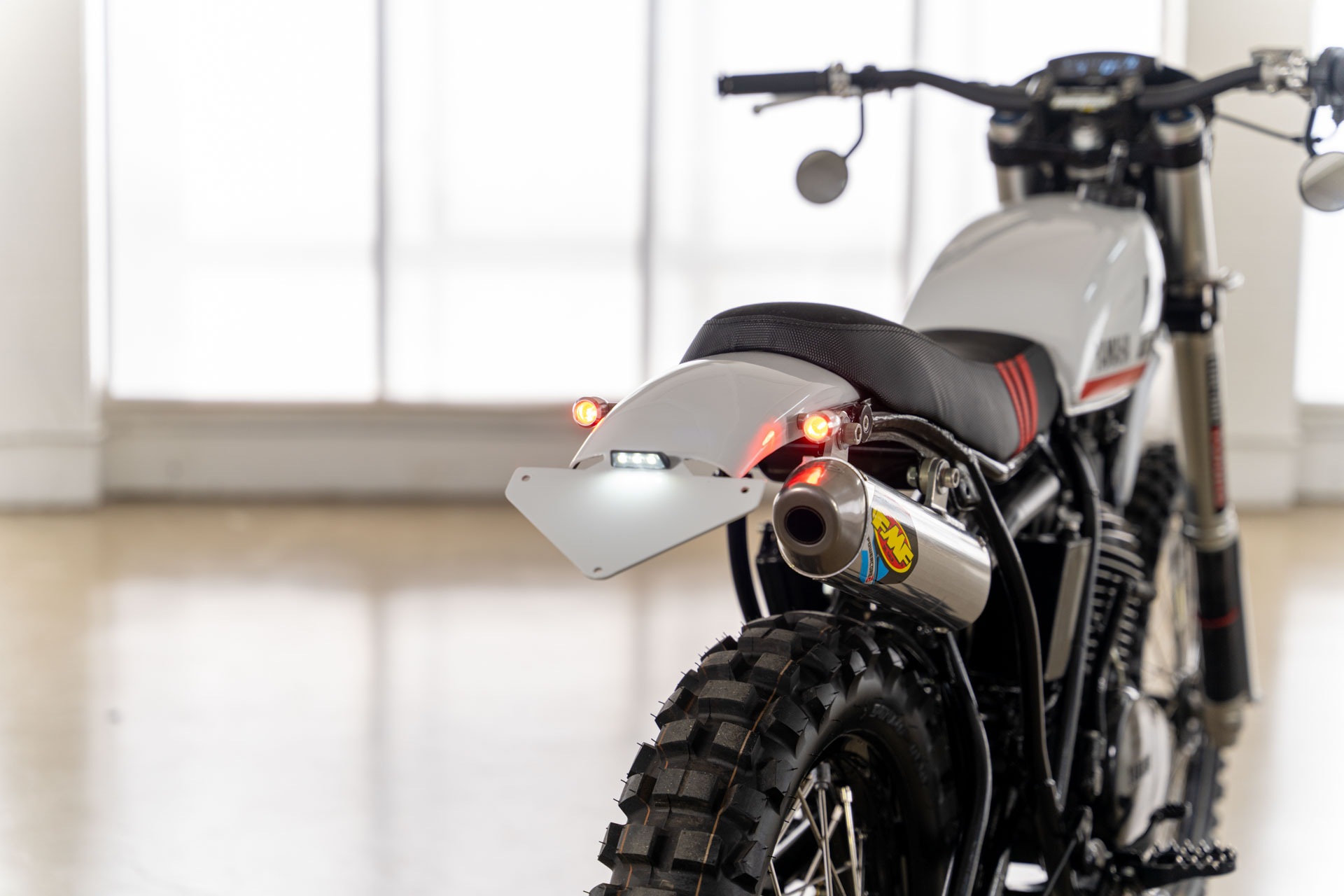 I wanted to create a very classic VMX look, but with modern MX bike sensibilities. Walking the line between the 2. That meant shapely rounded fenders, without the sharp edges and blending those in with all the modern gear we were fitting onto this bike. 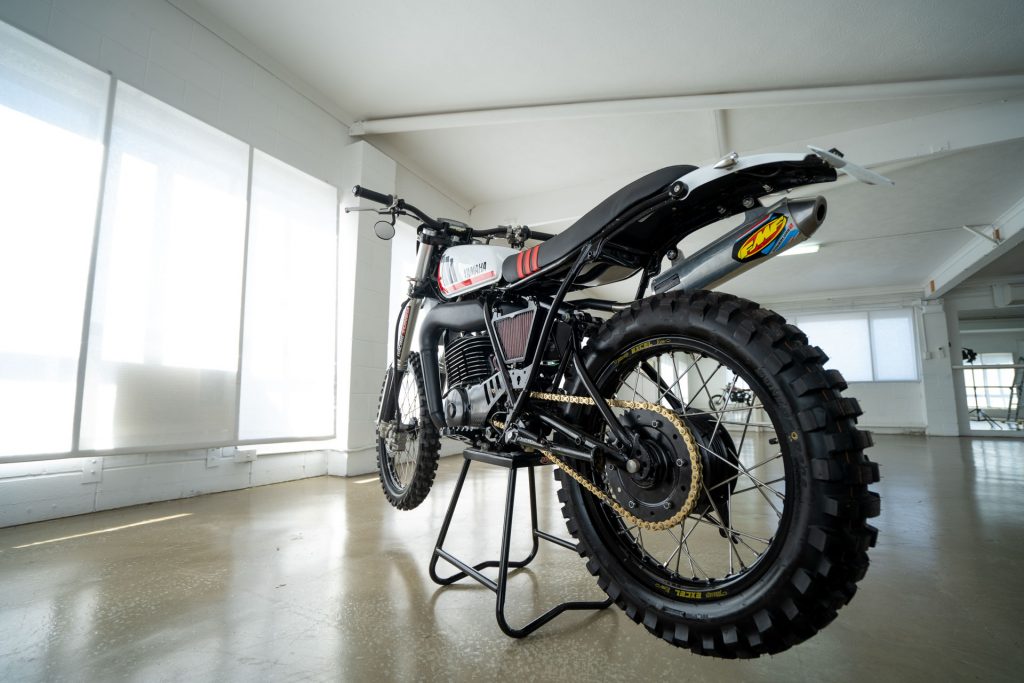 The front end is also dripped out with custom aluminium work. Fork shrouds, headlight plate, and front fender, which are all hand made parts. Taking the lead from the rear fender, the front was made to suit and complemented with a headlight plate that’s a real stand out piece on this bike. It’s a simple shape, dressed up with a 4.5” Purpose Built Moto LED headlight, with 2 running lights frenched in at the bottom of the plate. In our projects to come this year you’ll see a lot more hand made aluminium body work as we sharpen up those skills. 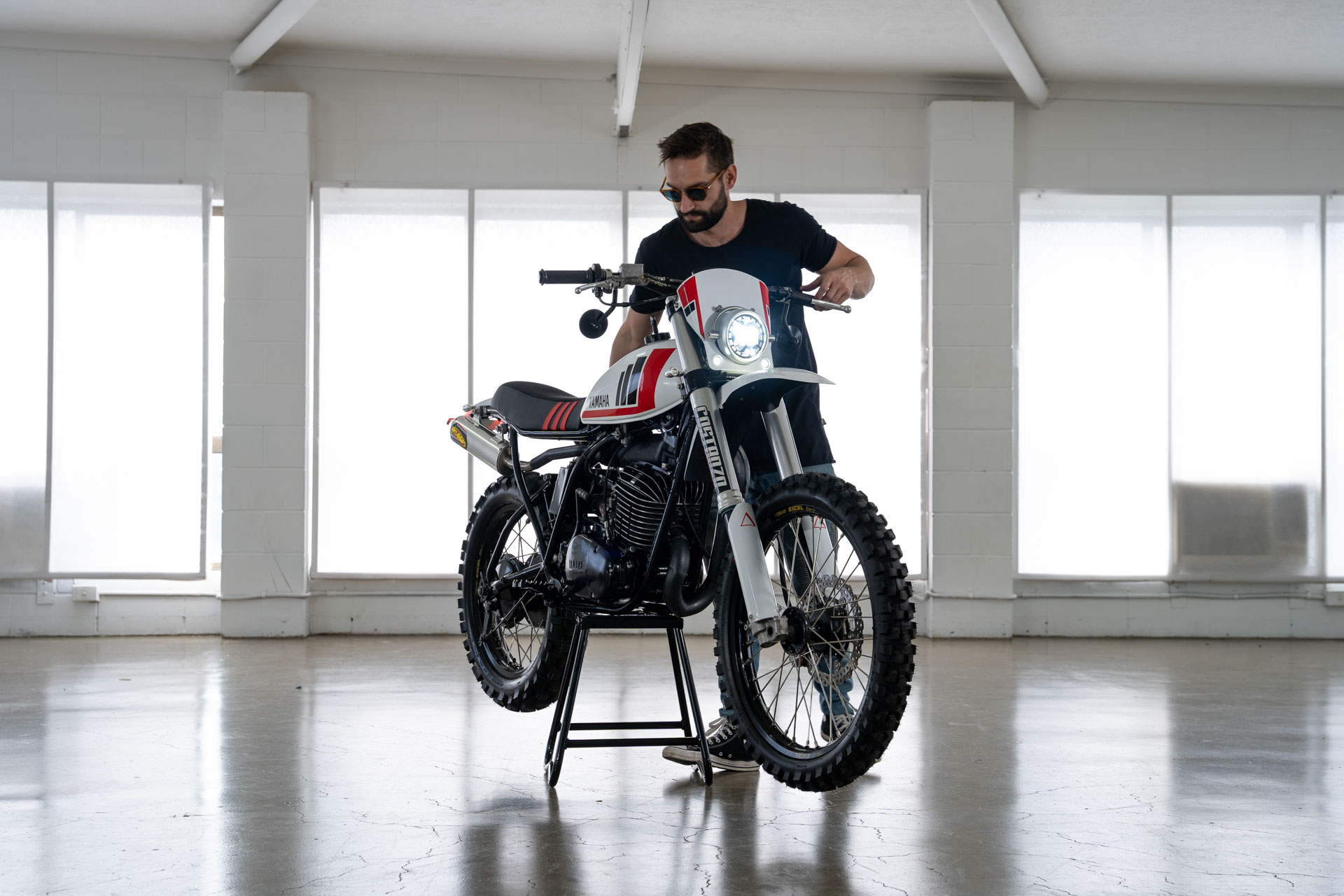 Finishing out the front end is a set of Pro-taper mid rise bars, domino throttle, PBM push button switches and some aftermarket levers. We’ve also set up a pair of our new Scrambler mirrors that mount on your lever pivots for a super discreet mirror set up. The Dash is an all in one digital cockpit, the Daytona Deva. It has way more features than the 1978 DT400 can handle but it works really well for the functions we are using.

The Expansion chamber on the DT400 Scrambler was in pretty bad shape, a lifetime of off road abuse was showing in the form of rust, and cracked seams. Usually, we would source a performance upgrade but the power on a DT400 is smoothed out by the factory chamber, so the call was made to repair the old one. A few select cuts and some repair work and smoothing out cleaned this part up better than new. Once the metal work was done and the pipe was fitted with an FMF muffler that was modified from a KTM 300EXC. The exhaust was sent for ceramic coating to make sure all the effort we put in to making it nice lasts. 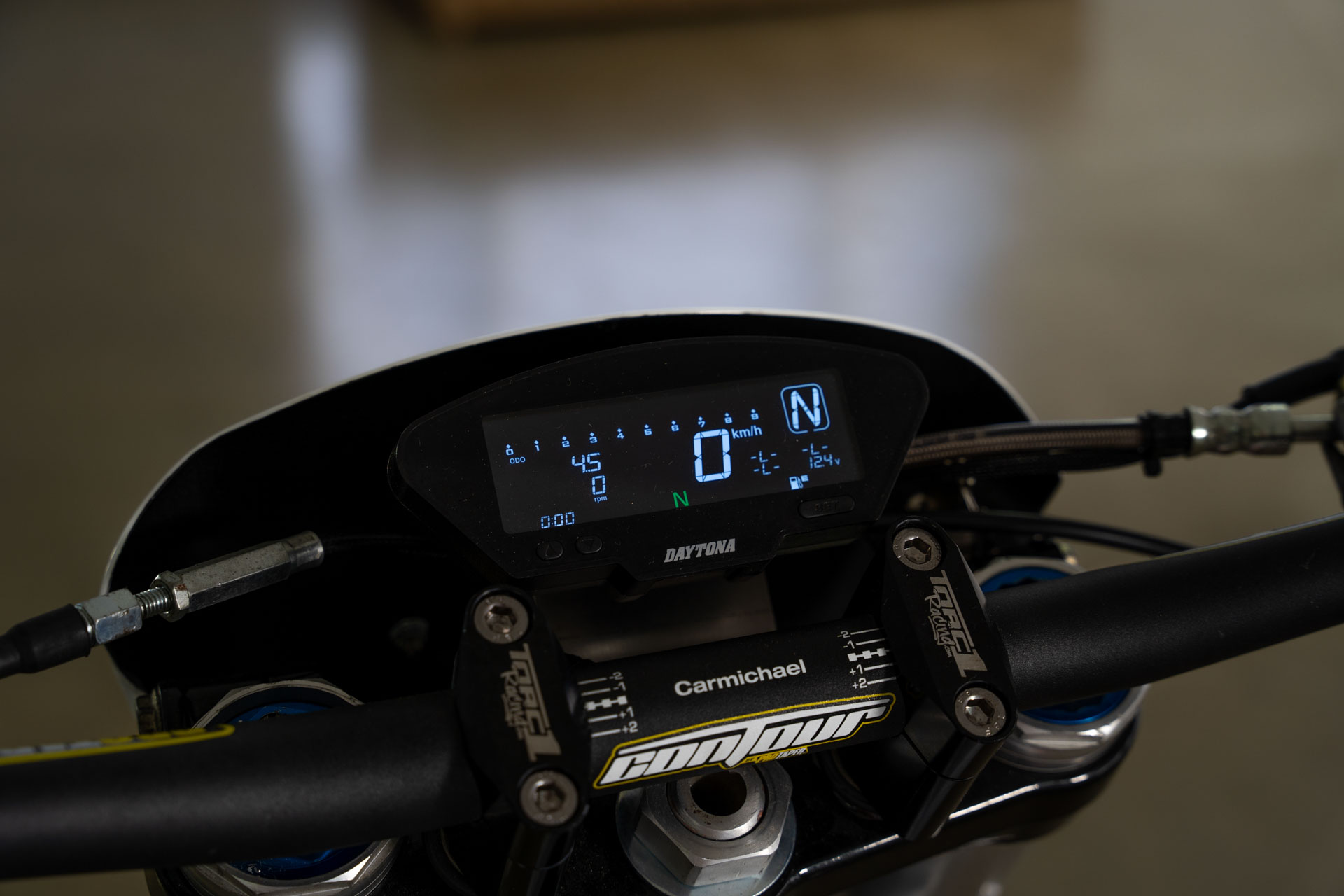 With the metal mangling finished up, we laid down a fibreglass seat pan and small electroincs tray that houses the brain of the lighting system, our Purpose Built Moto Black Box module, and a small battery to allow the use of LED lighting on the new 12V system. The black box module can get hidden just about anywhere and takes care of all the functions you need when using slim push button switches. A far simpler solution than the over complicated M-unit set ups.

Shaping the foam on this seat serves 2 purposes. 1, a place for our riders ass. 2, to tie the tank line into our custom rear fender. Mission accomplished with the help of Timeless Auto Trim laying a black gripper seat with a few trick red details.

The colour scheme and design on this bike really made the project, and it’s not often on our builds that it does that. I prefer to let the shapes do the talking. How can you deny the combo of white, red and black here though? Taking notes from the classic DT400 livery, literally flipping the decal on its head and designing a few select details to suit. My personal favourite is the headlight plate colour design, something about it just gets me excited to ride. These crisp colours have been laid down by none other than Justin at Popbang Paint. 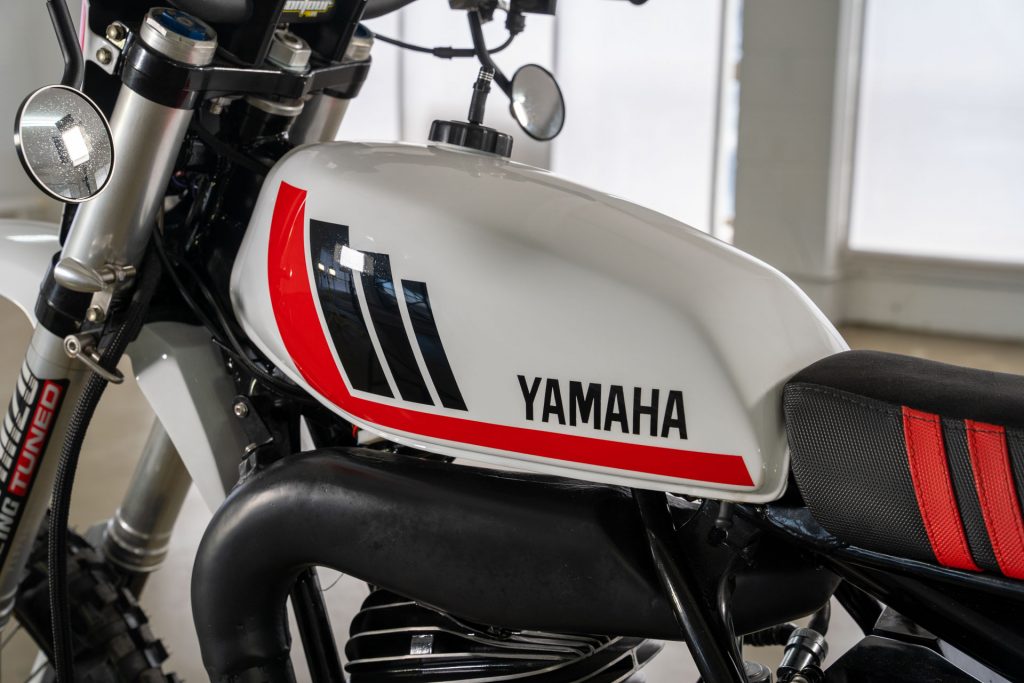 Starting with the 400cc 2 stroke power plant, PBM has crafted something we’re really proud of. The style of this machine is undeniable. A crossroad of VMX nostalgia and modern off roaders, pulled off with a heavy injection of performance parts. The ride on this bike is a thrill around town, although it’s very hard to just take it easy on a bike like this. I’m sure our rider will treat it right and have it dirty most of the time. 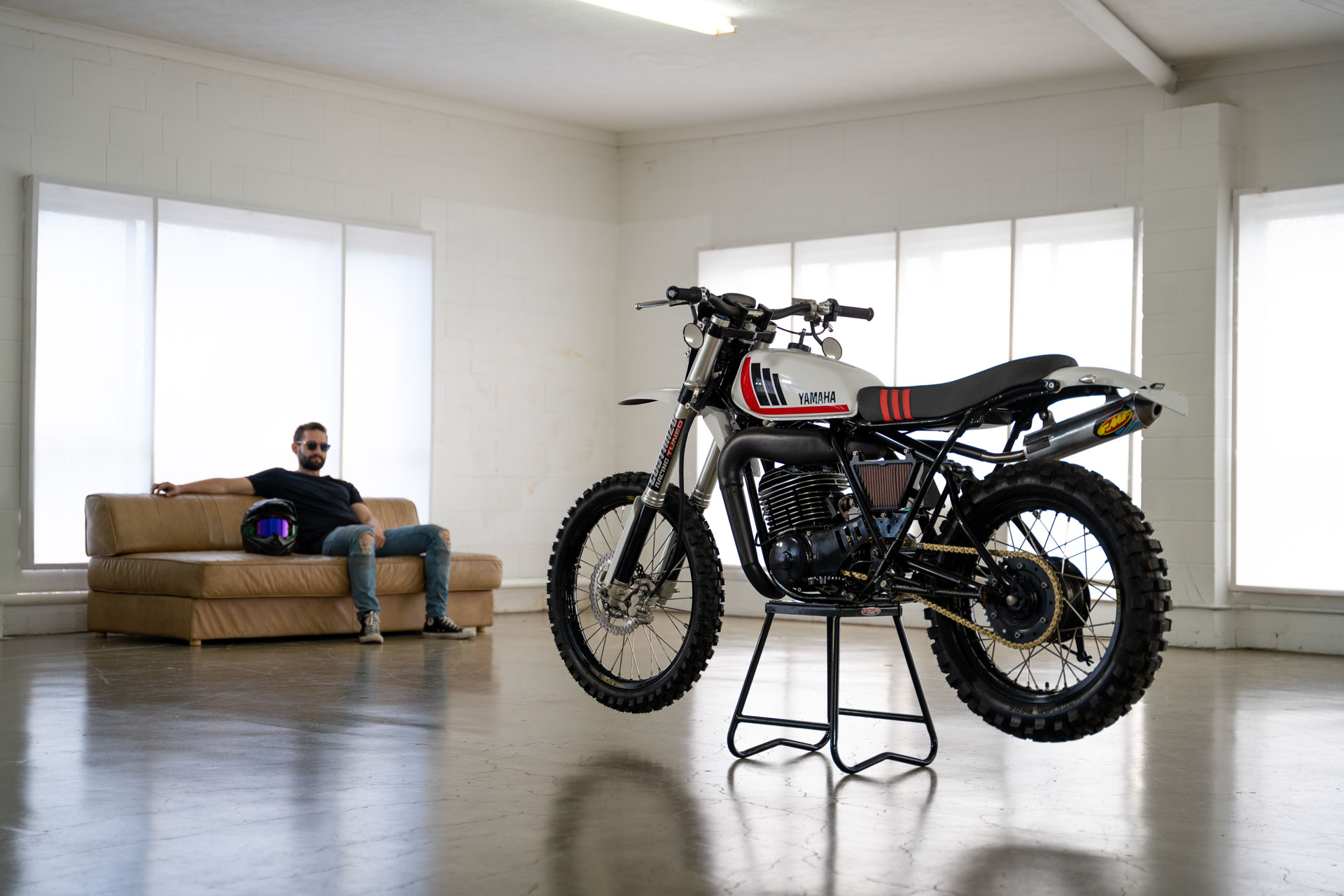 That’s it for the build break down on the Yamaha DT400 Scrambler – if you like the build or have any questions about the parts and processes we used, leave a comment below. We also have a build gallery and YouTube video accompanying this build so make sure you check those out too.