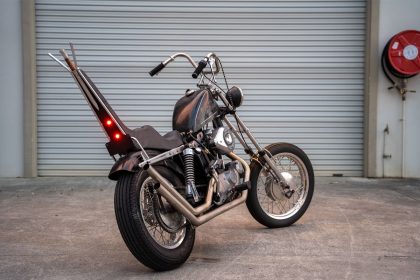 Tyson’s Ironhead Chop came to us as a bit of a wreck. It was moved from a backyard in Compton L.A. thrown in a container and shipped to Aus. As it rolled into the shop it had good bones and a fresh set of rebuilt wheels. Drum brake front and rear, laced up to a set of ally rims 19” front and 16” rear.
Everything else was pretty toast.

I took the job because I was interested to learn about about these vintage Harleys, having never worked on one at all. The bike was in completely unknown condition, I noticed right from the get go the kickstarter had a strange issue and didn’t seem to engage. The first thing I did was take it down to a mate, Dan Headons workshop. Creatively named “Dan’s Workshop” he’s quickly developed a name for being the guy to see about old Harley engines. He checked it over, repaired the Kicker gear and replaced the clutch among a few other things. We also went ahead with an S&S Super E carb and air cleaner set up on it, trying to milk a little more reliability out of the 1972 V-twin. 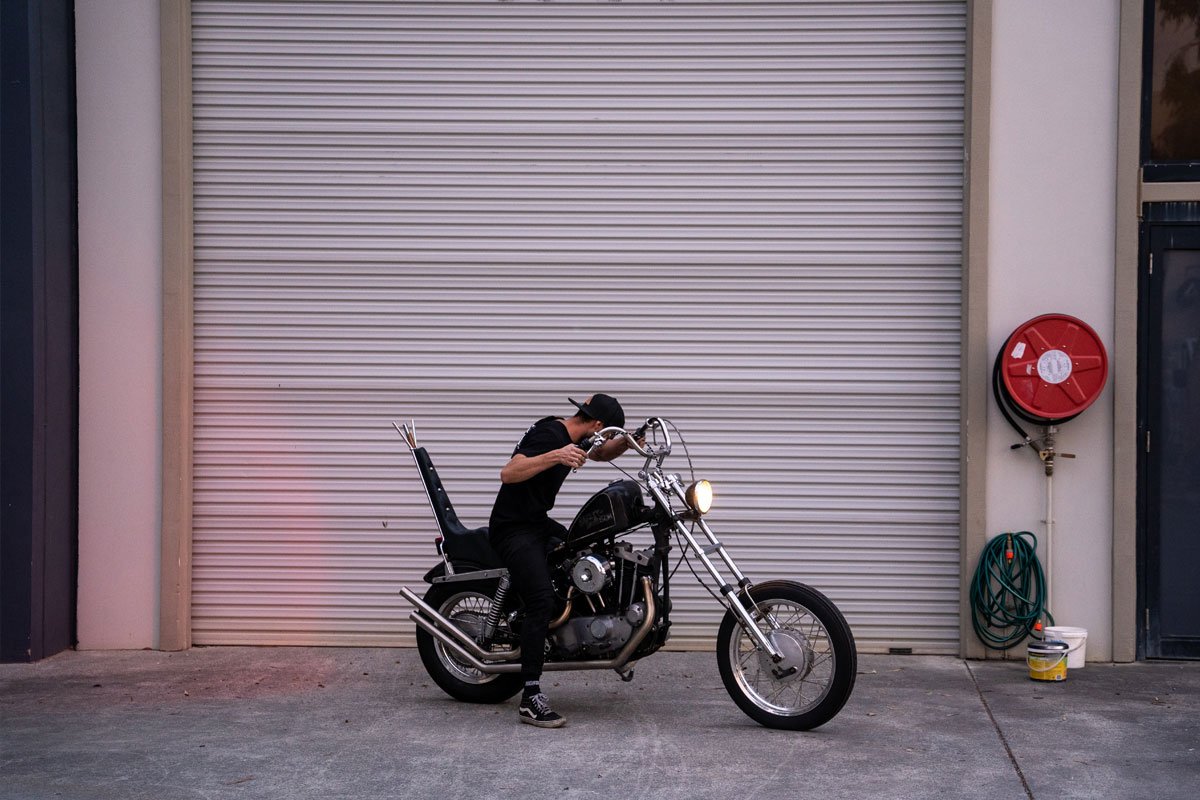 Now I knew the engine was in decent shape, I could start the process of building the bike. Tyson had a pretty good idea of what he wanted. With an 8” over front end, trimmed fender, Tall Sissy bar leaned back and a big King/Queen Seat. So that gave me a jump off point to get fabricating.

I always enjoyed looking at the vintage choppers that get around the Gold Coast, a lot of the bikes we build are simplified and stripped down to create a smooth and clean aesthetic. Choppers however are a little more reckless, featuring fab work and wild ways of getting the job done just because. It’s a whole different way of thinking I was keen to explore.

The bike came with a fender that we trimmed up, re-mounted and sorted out some spacers for. That gave us the basis to start building the sissy bar and seat. Supplied with the bike was a WW2 Bayonet, so the obvious choice was to work that into the sissy bar. The Chrome Struts on the Ironheads rear fender were used as a base to build from with a tall sissy being shaped to reach just higher than the bars. The timber on the handle was falling apart. I chose to replace it with some Tasmanian Burl timber, hand shaped to suit the handle and finished with some nice brass pins I made. 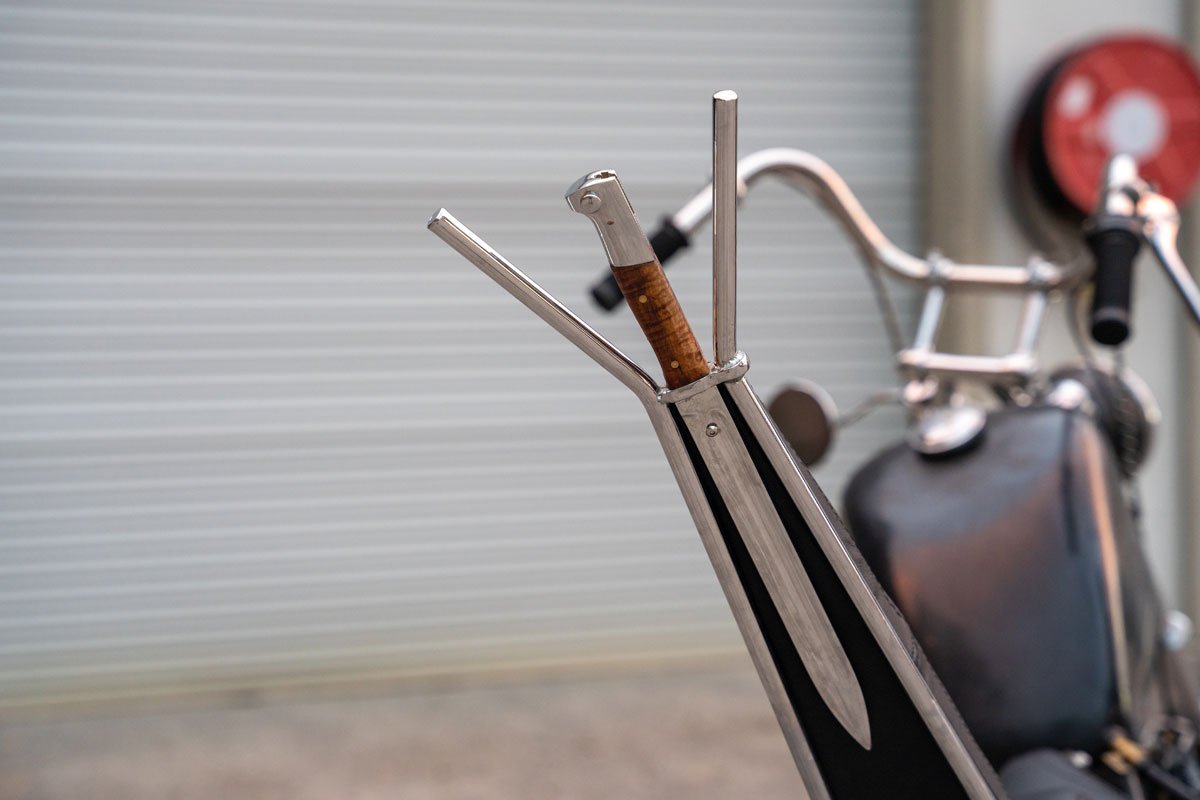 When building the seat pan we used the front pivot mount on the frame, and the top of the sissy bar for mounting points. Shaping the King and Queen base out of aluminium sheet, and grafting in some tail lights. I used a set of Hollowtip LED lights recessed into the back of the seat. Something different I’ve wanted to try for a while and this bike seemed to suit it well. After some Haggling with Jamo from Timeless, I got him to agree to doing some pin cushion style upholstery on the seat. We got some Stainless Steel  brush finish buttons and he went at it making a chesterfield style seat cover. 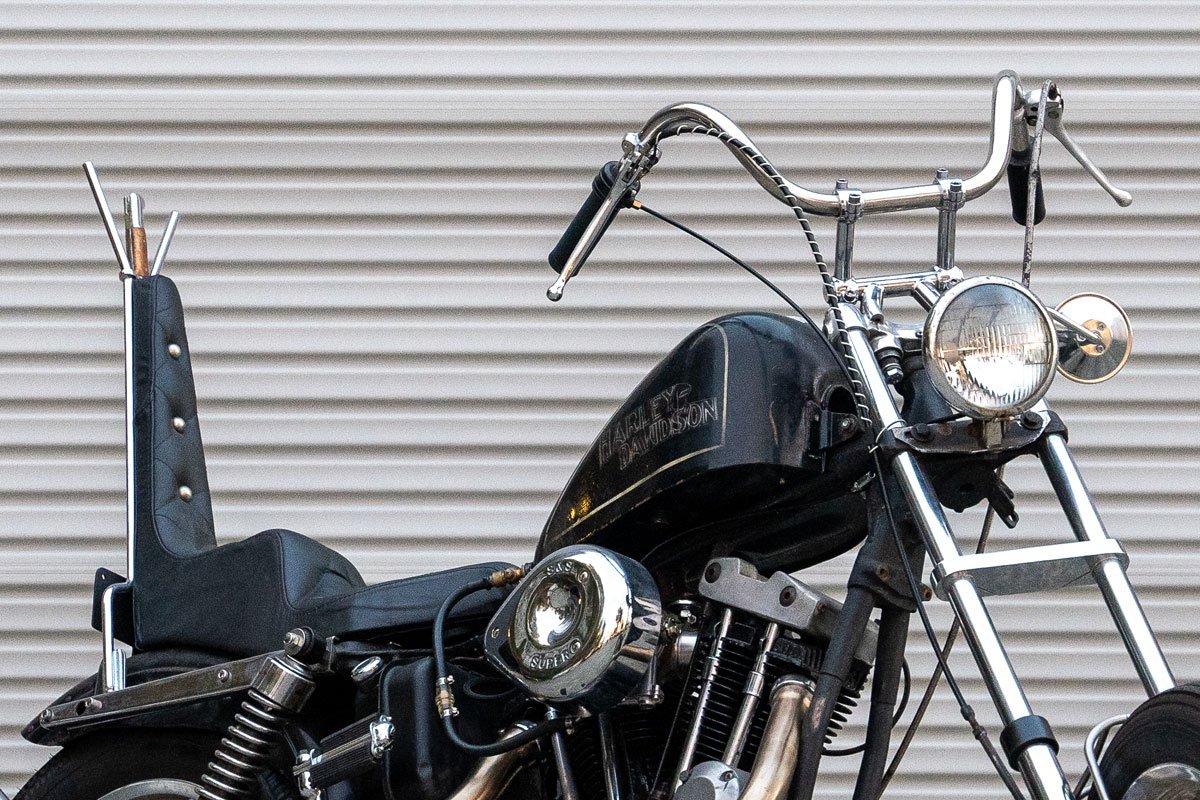 With that done we turned out attention to the tank, after a clean down we found holes big enough to fit out thump through along the bottom sheet metal joins…. It was a bin job. Luckily a mate, Camren from Sydney, linked me up with a king sporty tank in a bit better shape, I just had to cut the filler cap from the old tank, weld it in and we were good to go. Mounting it high on the back bone, I turned up an outlet for a rear petcock set up and that finished it up. The tins got sent down to Mitch Bailey for a brand new, 50 year old paint job (his specialty) black, simple white pinstripe and an old HD logo plastered on the side for good measure. 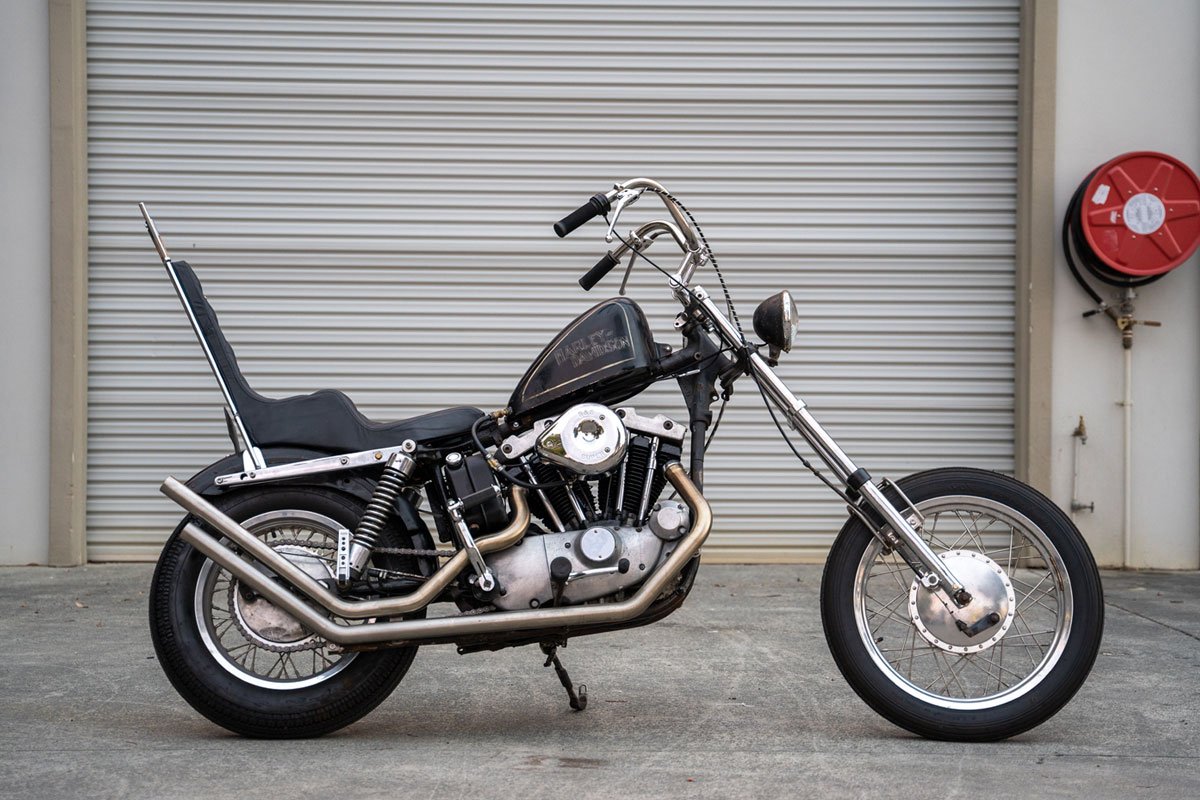 Tyson had fitted up a set of 5” risers and a set of pullback bars. The Ironhead sportster, this set up, the 8” over forks plus a king and queen leaves little to no room for the rider. I sourced a set of Dogbone risers and fabbed up a mount to bolt onto the top yoke. This gives you a heap more room up front and looks pretty wild. 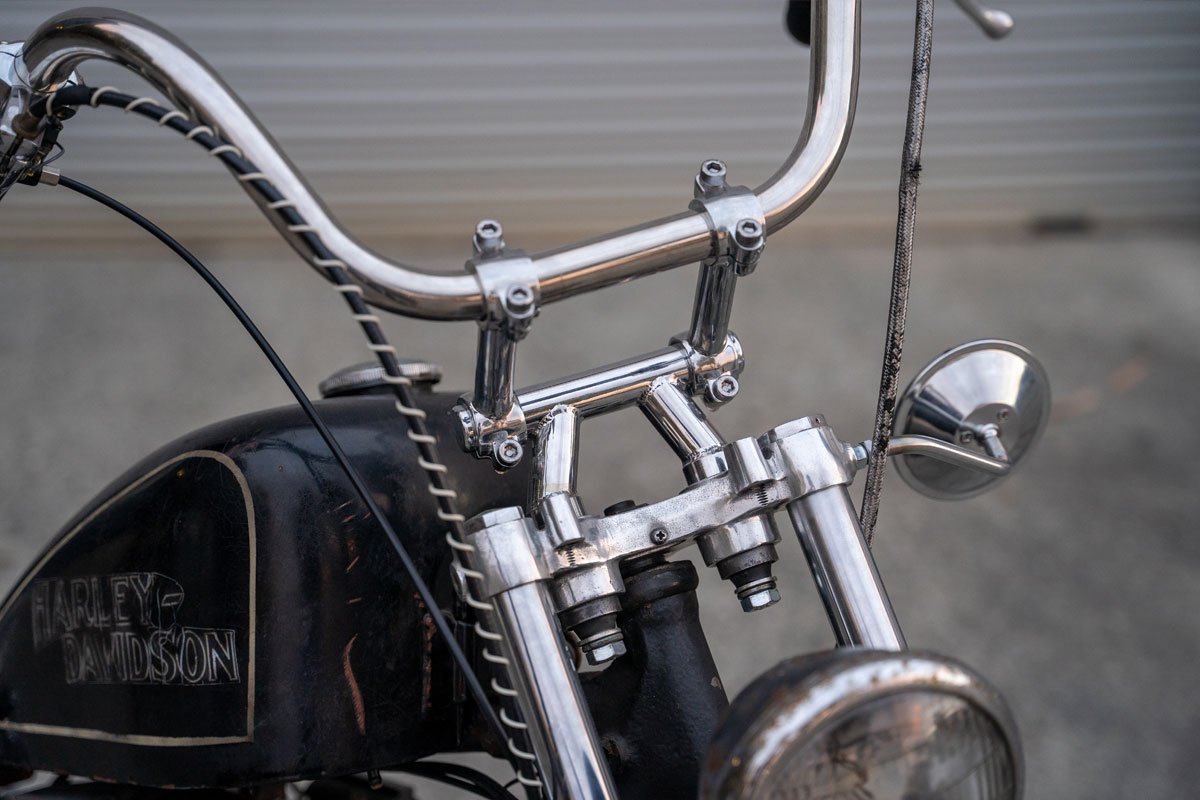 When working on the front end we discovered some pretty bad signs that these forks we’re in rough shape. Apart from the chrome being rusted, I turned the wheel pushing it through the shop and the axle popped out from the forks flexing so much. We needed to stiffen these forks up and have them rebuild to make it rideable. Before the front end was sent away for chrome I grabbed one of our DIY fender mount kits and made up a fork brace for the 33.4mm K model forks. These forks are pretty sought after, so although it would have been much cheaper to replace with another front end, we decided to persevere and get them repaired. Charlie from Costanzo racing tuned took the job (and probably regrets it). After having the legs and tubes re-chromed, and new bushings installed we were left with the job of making these things function. 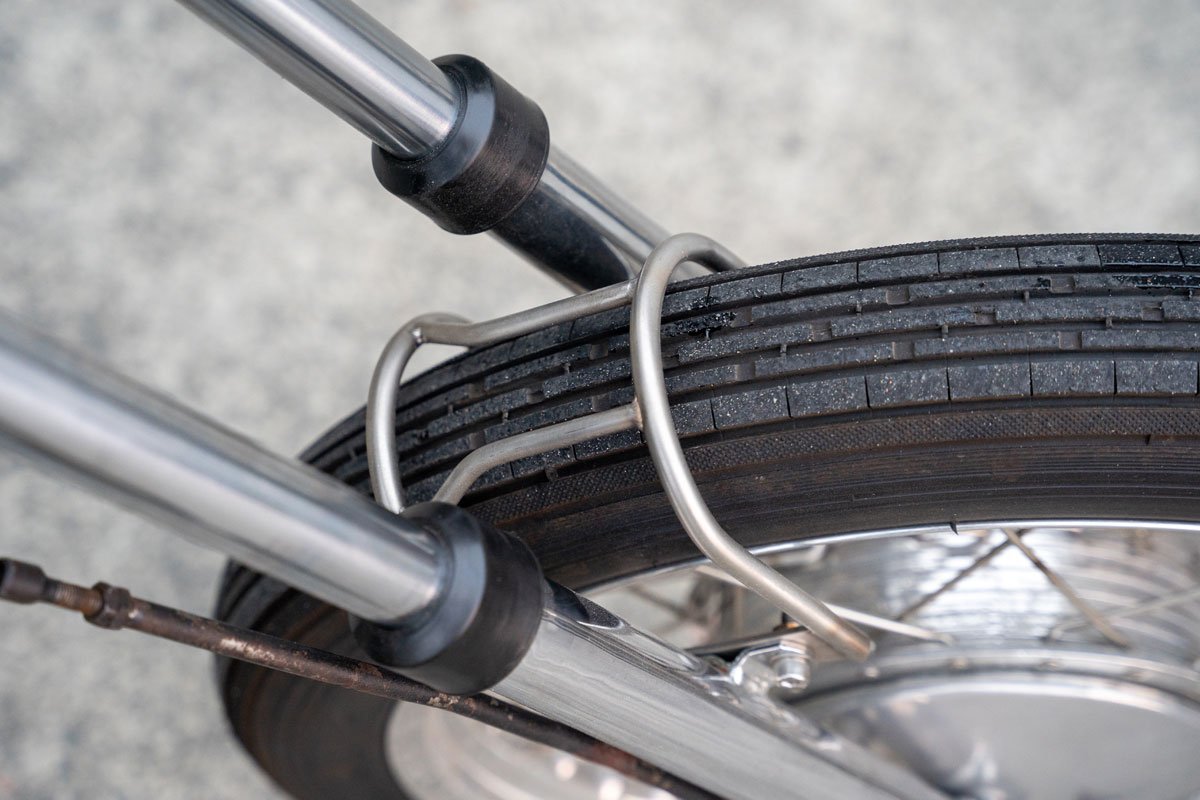 Between myself and Charlie, the Ironheads 33.4mm K-model front end was kitted out with completely custom internals. The mods help the dinosaur front end function like actual suspension. With custom compression, dampening and top out springs to make sure the ride is as good as you can get from an 8”over set up.

One of our last fab jobs was building the exhaust, it’s a fun job on any bike, but I had a lot of fun making this one. It’s a Stainless steel Custom exhaust, 1 ¾” diameter that snakes under the right foot peg, and finished out past the back wheel, straight through. Tack it up, back purge, tig weld, finish back and brush finish the lot when you’re done. The exhaust note out of this thing is amazing: the perfect crackle, and that nice gurgle over run that you want out of the old boy Harley. 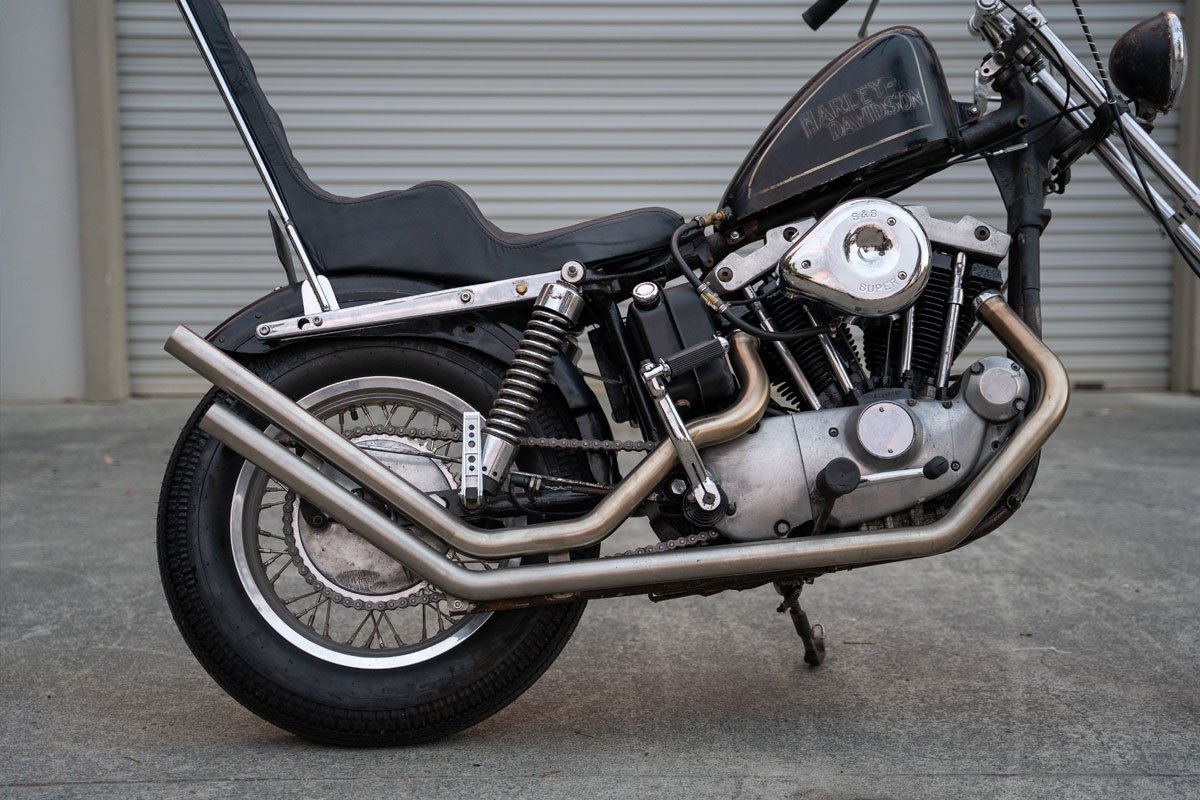 Wiring this old dog up was a dream. 3 wires to the front light, 3 wires to the rear, link up the ignition and kill switch, charge the battery and it was done. The only tricky part was fabricating a brake switch onto the front lever and running a single wire from the switch. That meant the dimmer circuit on the LED brake lights to achieve the 50% running 100% brake light was swapped to work on the      -ve side. 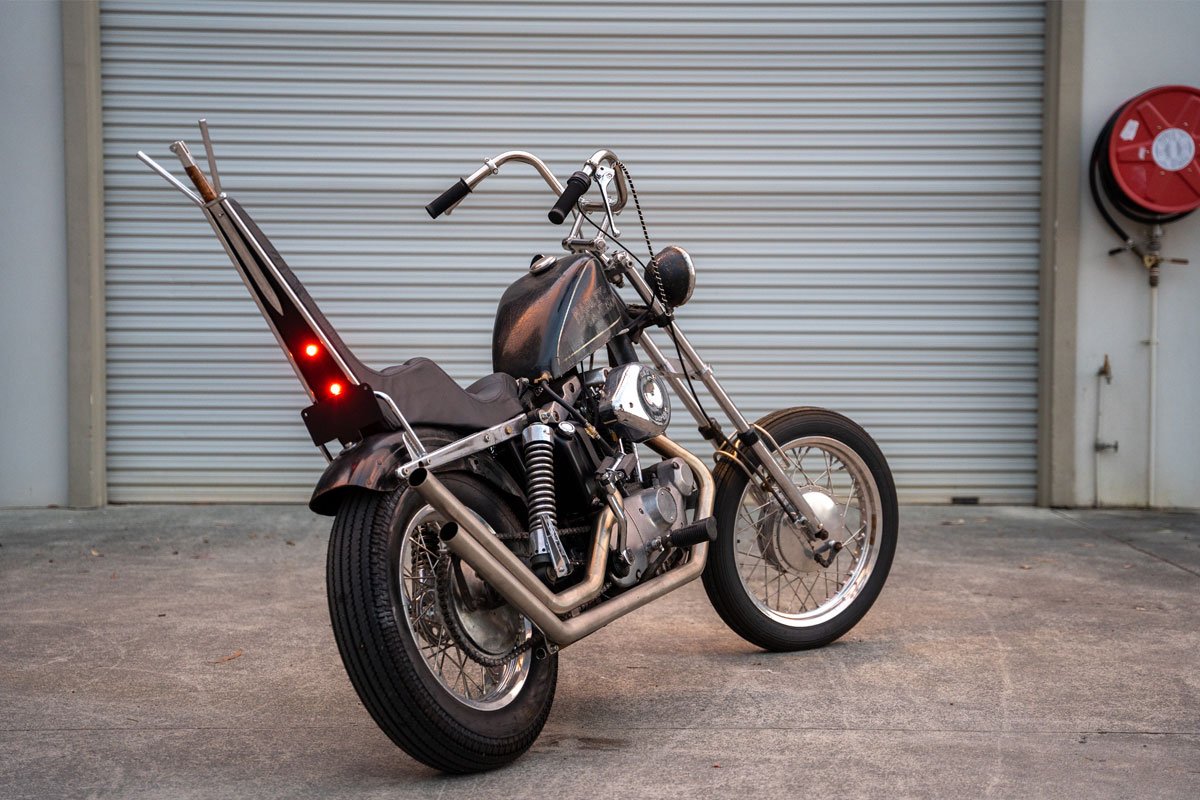 I was hesitant to kick the Ironhead over for the first time after seeing so many bikes kick back on people and shoes go flying over the years. Surprisingly, after sitting so long, the 1972 Ironhead fired up second kick and ran! Sent out to Dan again to get the tune dailled in and make sure the 1972 IOronhead was ready for the road, now it was actually rideable!

I have to say I can see why people love these things so much. The clunks and pops of the old engine, knees in the breeze. Scarily choppers are starting to make a lot of sense to me know. I guess I’m gonna need another bike.